What to do when an artist appropriates your hard work and flips it for big money at a high-end gallery? When Richard Prince reworked photographer Patrick Cariou’s photographs for his “Canal Zone” series, Cariou sued him. They settled out of court.

But then, earlier this month, Larry Gagosian decided to devote the entire Gagosian Gallery booth at Frieze to Prince’s Instagram works. One of these “New Portraits,” as they’re called, depicted an image taken from the feed run by the online pinup site and message board SuicideGirls. And now SuicideGirls is fighting back by beating Prince at his own game.

The crew of Internet-friendly alternative models is selling the same prints as Prince, but for $90 instead of Gagosian’s $90,000. They’re perfect replicas of replicas, since all Prince did to alter the photos was leave creepy comments through Instagram’s social network.

“I’m just bummed that his art is out of reach for people like me and the people portrayed in the art he is selling,” model Missy posted on the site.

This aesthetic conundrum — which reproduction is real? — has touched off a viral controversy over who owns art and the profit made from appropriation. Prince has long inhabited this territory, of course. Last year, our senior art critic Jerry Saltz deemed the Instagram paintings “genius trolling.” At Frieze, the trolling paid off, and all but one of the appropriated pieces sold (one depicting two men kissing, rather than a hot-chick selfie) at the asking price. 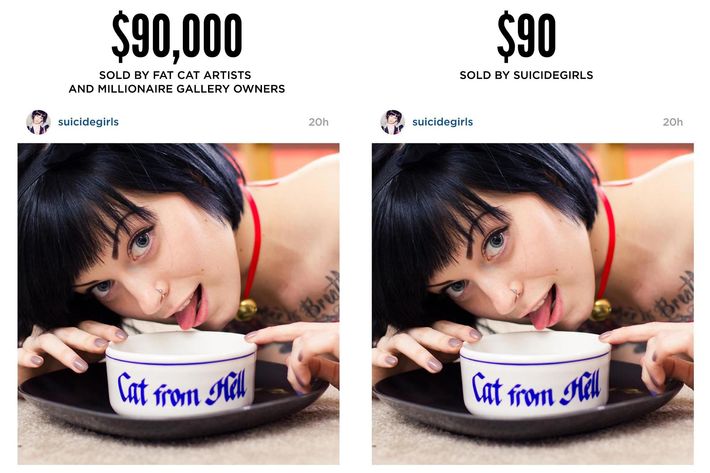 As the debate mounted, Saltz took to CNN (see the video below) to explain how the digital files that Prince appropriated are “in the public domain.”

“The copyright is getting very fuzzy on all this,” Saltz said.

He pointed out that, well, this is all old business: Andy Warhol and Jasper Johns appropriated plenty of mainstream objects — the American flag, the Campbell’s Soup can — and transformed these mundane symbols into art. Is Prince on the same level?

Perhaps we’re uncomfortable with Prince’s appropriations because they’re happening in our own time rather than with some cushion of time gone by. And also, recall that in the heyday of Pop, Warhol was just as controversial. These days, technology puts a new spin on the issue. Through social media we’re all as visible as, well, a can of Campbell’s Soup — we’re all brands, to put it in market-speak. Every day we expose ourselves to the chance that our images might be appropriated, remixed, printed on a canvas, and hung on a wall. It just takes an artist with the guts (or amorality) to go for it, like Prince.

So as long as we choose to become brands ourselves, through Instagram posts or Facebook updates and tweets, our identities are liable for theft. After all, social networks themselves package our profiles to make a quick buck all the time. Whether that creative revamping can be sold for sticker prices like $90,000, well, that’s more up to which artist is doing the work. For a big brand like Prince, it’s easy. I doubt he minds SuicideGirls encroaching on his territory.

Profits from the SuicideGirls print sale will go to benefit the Electronic Frontier Foundation, which pushes for data privacy as well as openness on the web. The irony is palpable.

true believers only 8 mins ago
Huge Nerd Demi Lovato Will Investigate UFOs in a New Peacock Series [Meme voice.] Aliens.
superlatives 28 mins ago
The Most Virtuosic of St. Vincent, According to Annie Clark “With my guitar, I did what I always do, which is just kind of humbly make shit that I think is cool.”
By Brady Gerber
trailer mix 12:33 p.m.
Julianne Moore Is Spooky on Main(e) in Lisey’s Story Trailer “Was it real or was it my imagination?”
fruit ninja 12:04 p.m.
A Celebration of Jean Smart’s Sad-Funny Work on Mare of Easttown Helen Fahey just wants to play Fruit Ninja in peace.
quar goss 11:59 a.m.
Jennifer Lopez and Ben Affleck Went to Montana Alone for a Week, As Exes Do TMZ reported Affleck first reached out in February — and E! News says A-Rod is still reaching out too.
hot pod 11:40 a.m.
How NPR’s Invisibilia Reinvented Itself Plus, Clubhouse finally comes to Android.
reality tv 11:23 a.m.
Below Deck Sailing Yacht’s Boat Crash Was Worse Than All Those Clips Looked Both crashes, that is.
degrassi: where are they now? 11:02 a.m.
Drake to Receive Billboard’s Artist of the Decade Award at the 2021 BBMAs He beat out Taylor Swift, Rihanna, and more.
golden years 11:00 a.m.
An Ode to A Knight’s Tale and Its Perfect David Bowie Dance Scene Twenty years ago, A Knight’s Tale became a cultural phenomenon, thanks to the magical combination of Heath Ledger and a medieval disco.
By Ashley Spencer
trailer mix 10:33 a.m.
Matt Damon Brings Bass Pro Shop Energy to France in the Stillwater Trailer He needs to get his daughter out of jail.
trailer mix 10:05 a.m.
Dev Patel Is Axe Daddy in The Green Knight Trailer This one’s for the horny nerds.
movie review 10:00 a.m.
Army of the Dead Is a Tale of Two Zack Snyders His Netflix Vegas-heist movie set during a zombie apocalypse, starring Dave Bautista, starts off great, but the fun doesn’t last.
my single is dropping 9:52 a.m.
Sleater-Kinney Is Back As a Duo With a New Album Carrie Brownstein and Corin Tucker released lead single “Worry With You” off their self-produced album.
broadway 8:37 a.m.
Hamilton, The Lion King, and Wicked Will Return to Broadway September 14 It’s the circle of, wait for it, aaaaAAAaah.
movie magic 8:00 a.m.
How to Un-Cast an Actor When an Army of the Dead star got called out, director Zack Snyder decided to scrub him from every scene — and swap in Tig Notaro.
last night on late night 2:31 a.m.
Billie Eilish Brings ‘Your Power’ to the Desert for The Late Show Try not to forget your sunscreen.
future nostalgia Yesterday at 11:51 p.m.
Kevin Smith Wants to Remind Everyone He Coined ‘Bennifer’ the First Time Around Do the children know about Jersey Girl?
cancellations Yesterday at 10:26 p.m.
Fox Tells Prodigal Son to Hit the Road After Two Seasons Having taught America an important lesson: Never trust a serial killer, even if he’s your dad.
tv Yesterday at 8:43 p.m.
Eliza Coupe, Ginnifer Goodwin, and Maggie Q Are Pivoting to Fox Pivot!
casting call Yesterday at 7:23 p.m.
Reinforce Your Cable Knits: Dave Bautista Has Joined Rian Johnson’s Knives Out 2 Netflix also purchased Knives Out 3 in March, so fingers crossed his character makes it to the threequel.
More Stories