Art, at times, can resist being owned. Conceptual work is often immaterial. A Sol Lewitt painting exists as words rather than colors. And contemporary art’s tendency toward gigantism means that some sculptures are almost impossible to show in the already admittedly large homes of the average collector. Take Richard Serra, for example. The artist’s latest work, Equal, a series of paired 40-ton stacked steel cubes now on display at David Zwirner’s West 20th Street gallery, required master riggers, hydraulic gantries, and a custom runway just to be installed in a building itself expressly designed to accommodate artists’ big ideas.

Now, if you were to buy one, just imagine trying to get installing it by your co-op board.

“There’s no school you can go to to learn it,” said Joe Vilardi, vice-president of Budco Enterprises, the family business that has been installing Serra’s sculptures for over 25 years. Vilardi does have an official master rigger license from New York City, which requires “at least five years of practical experience in the hoisting and rigging business,” as well as “good moral character,” according to the city, but the art of installing a Serra is more about improvisation, what might be called site-specific work. “A lot of on-site experience really is what it comes down to,” he said.

For Equal, Vilardi had to get creative. “First, we had to get blocks into the space,” he said. “David Zwirner was concerned about the floor cracking.” The weight of the blocks could have shattered even the gallery’s cement foundation, so the team made a sculptural on-ramp. “Basically, we built a bridge from the street,” Vilardi said. “We actually applied the weight from those steel beams to the floor in only three spots where [the] structure below was reinforced and could take tremendous loads.”

Budco then landed the blocks on the runway with the help of a crane and slid them onto the bridge with rollers, pulled along by a winch. With the bottom blocks in place, the job became vertical. “We have a hydraulic gantry that we use quite often for Richard, it takes 400 tons,” Vilardi said. “Not that Richard has had a sculpture that weighs 400 tons, but it’s that extra capacity that makes things safe.” The team hooked onto the blocks using an external framework of steel beams, then hoisted them the five or six feet necessary to place one block on top of another by means of a gantry that’s also a trolley system.

Vilardi makes the process sound simple. It’s child’s play, after all, stacking cubes. But the structure of the gallery made things difficult. The door into the space had to be widened to fit even a single block through, a not-unexpected necessity. (“A lot of art doesn’t fit through the doors at galleries and museums. Walls and doors do come up and go down all the time,” he said.) Then, the ceiling only allowed six feet over the finished sculpture, requiring a rig as minimalist as the sculpture itself. “As Richard dreams new things up, we have to dream up new tools and equipment,” Vilardi said. 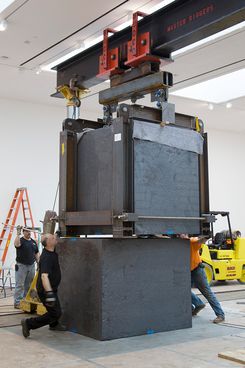 The blocks also had to be rotated so Serra could take advantage of the visual qualities of their varied sides, particularly those stacked on top, the placement of which subtly throw their bases off visual balance. “We spent weeks of engineering in our shop to figure out how to build a big swivel to have two or three guys make it rotate by hand,” Vilardi said. “We had to balance it on bottom and orient it perfectly.”

On a practical side, those looking to obtain a domestic Serra might want to consider downsizing from the 40-ton Equal pieces. Most buyers choose to install their Serras outdoors — but even that requires utmost care. You might want to hire Vilardi to put in a concrete foundation pad, for starters. You can’t just throw a Serra onto your lawn. Otherwise, depending on the quality of the soil, “it will sink and disappear,” Vilardi said. “What will happen with rain and freezing temperatures and thawing is that it’ll continue to sink and go off level and look ridiculous.”

But if a collector truly couldn’t live without a Serra as an indoor pet in her existing home? “I guess anything is possible. If you have a big enough space and if you wanted to open your floor and dig down eight feet and put in concrete, that could be done,” Vilardi said, laughing. “But in 25 years, I haven’t seen it done. Somebody will build a new room for them, a new private gallery. Typically they go outdoors.”

follow friday 5:59 p.m.
Julia Young Was the Most Popular Girl at Sleepaway Camp We chatted it up with the comedian on Instagram Live today.
these reboots are manolos 5:33 p.m.
John Corbett Swears on Chanel Aidan Is in HBO Max’s Sex and the City Reboot SJP has neither confirmed nor denied this.
the industry 5:06 p.m.
Ryan Coogler Says Black Panther 2 Production Will Stay in Georgia But he condemned the controversial new voting law in an op-ed.
chat room 4:48 p.m.
Younger’s Molly Bernard Had a ‘Noble Duty’ to Fill Diana’s Shoes This Season “I gotta say, I didn’t do any neck training, and I regretted it.”
this week in late night 4:03 p.m.
Tooning Out the News Won Late Night This Week Plus “Steve” Colbert and a very sexy slide whistle.
spoilers 3:43 p.m.
That Falcon and The Winter Soldier Reveal Is More Than Just a Fun Cameo Debuting this particular character at this particular stage in the MCU opens up some intriguing future scenarios.
tv review 3:06 p.m.
Big Shot Shoots and Mostly Scores John Stamos plays basically the anti–Ted Lasso in Disney+’s new family drama centered on a girls’ basketball team.
overnights 2:51 p.m.
Mythic Quest: Everlight Recap: Believe in the Light A characteristically chaotic office celebration for a fictional holiday finds Mythic Quest, and us, reveling in a post-pandemic return to normalcy.
art world 1:32 p.m.
Helen Marden’s Bitter, Lucky Light Her joyful-despite-everything pandemic paintings at Gagosian.
obits 1:10 p.m.
Helen McCrory, Peaky Blinders and Harry Potter Actor, Has Died at 52 She also had a prolific stage career, appearing in over 25 productions since 1990.
books 12:44 p.m.
Simon & Schuster Won’t Distribute Book by Cop Involved in Breonna Taylor Killing The bar is on the floor, folks.
two friends 12:41 p.m.
Hank Azaria Elects Richard Kind the Mayor of Hollywood “You know everybody.”
movie review 12:37 p.m.
Sebastian Stan Makes Monday a Movie Worth Waking Up For The actor and costar Denise Gough give it their all.
my single is dropping 12:21 p.m.
Brothers Osborne Release ‘Younger Me,’ Inspired by T.J.’s Coming Out “I’ve always wished I could speak to my younger self, give him a hug and show him who he’d become.”
evil stepsisters 12:06 p.m.
Barb & Star Made a Deal With Bob Iger Kristen Wiig and Annie Mumolo are writing a “fairy tale musical comedy” about Cinderella’s sisters.
bachelor nation 11:58 a.m.
Colton Underwood Addresses Cassie Randolph Allegations: ‘I Made Mistakes’ “I’m extremely, extremely sorry.”
matt berry 11:53 a.m.
Matt Berry Ushers in Cool-Middle-Aged Man Summer With a New Single Get ready for some crunchy guitar solos, kids.
overnights 11:51 a.m.
Younger Recap: The Motion of the Ocean This Quinn thing is going to be the worst, isn’t it?
best of 2021 11:50 a.m.
The Best Books of the Year (So Far) The slate for 2021 — of fiction and nonfiction alike — is bursting with vibrancy and verve.
By Hillary Kelly
true crime podcasts 11:26 a.m.
This Week in True-Crime Podcasts: Spies From Russia Plus, a killer movie come to life.
More Stories