You’re about to enter another dimension, a dimension not only of friendship and regard, but of love. A journey into a wondrous land of ambiguity whose boundaries are that of imagination. Next stop, the Friend Zone. This was all I could think about while watching this episode of Jane the Virgin, which seemed to be flirting with the concept outright without ever saying the words. Or to be more accurate, Jane the Virgin was talking about how the Friend Zone doesn’t really exist, that there are friendships and there are relationships and both are just as complicated and muddled as they can be.

But before we jump into the analysis of this week’s Jane the Virgin, I think I should admit something: I’m a Jane and Michael shipper. However, I also understand that the fairy-tale/telenovela aspects of the show near demand that Jane end up with Rafael or, at the very least, unattached but surrounded by her loving family, so I get that this ship is as doomed as they come. But it wasn’t until Chapter 21 that I finally realized what it is that I find so appealing about the Jane-Michael dynamic and what makes it so special, both on television, and in the world at large.

The fictional relationship that reminds me the most of Jane and Michael’s is that of Anne Shirley and Gilbert Blythe from the Lucy Maud Montgomery Anne of Green Gables series of books and eventual miniseries. The pair were first adversaries who became friends and eventually romantically involved, but the most resonant aspect of their relationship was always the fact that Gilbert seemed genuinely interested in being Anne’s friend — it wasn’t merely a consolation prize when he didn’t have her heart. This is the antithesis of most modern individuals who believe in the Friend Zone’s existence and who view friendships with the women they desire as merely biding their time and putting in effort in the hopes that it will magically pay off in true love down the line.

With that said, when Michael says to Jane, “In a perfect world, I’d want more, but the world’s not perfect and the most important thing is I want you in my life,” it made my heart glow a little, too. Michael and Jane may not have the spark of Rafael and Jane that appeals to so many people, but they do have a mutual respect and friendship that is deeply resonant and not so easily abandoned. It’s the kind of low-key relationship that suggests beneficence and stability, two highly underrated elements of true romance.

What I want for Jane, what I think everyone wants for Jane, is for her to eventually find a partner who is just as interested in being her friend as he is in being her partner and her forever love. Whether that’s Michael or Rafael or whether it’s no one, for now, finding a person who can love her both as a friend and otherwise isn’t just what she needs — it’s what she deserves.

But Jane’s not the only person trying to navigate the blurry line between love and friendship. Let’s look at the houses for the week. 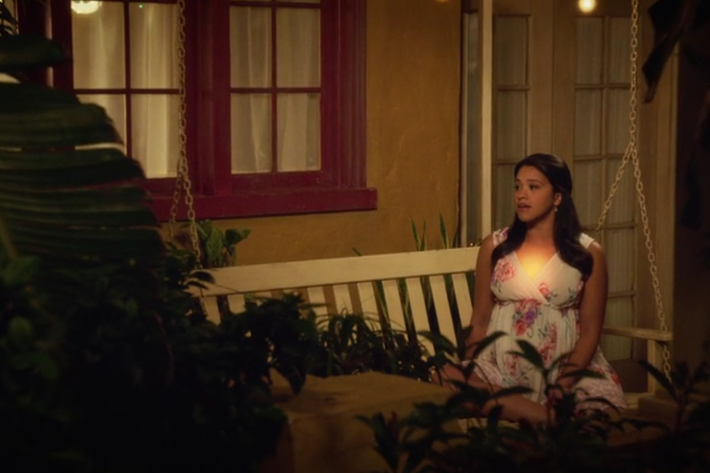 House Villanueva
Despite being responsible for organizing the affair (thus why it’s being held at the Marbella, one assumes), Jane has no interest in going to her five-year high school reunion. Her life hasn’t proceeded the way she planned, but both Lina and Xiomara convince her that attending is the right thing to do. Jane attends, but things are slightly disastrous, with people finding little to discuss with her beyond her pregnancy, leaving her frustrated and terrified that in a matter of weeks people will only ever see her as a mommy. Additionally, she runs into her high school bully who informs her that she made Jane’s life a living hell in high school in order to manipulate a boy and did so by going after Jane’s weak spot: her mother.

While dealing with many of these anxieties, Jane turns to Michael and the two rekindle their friendship that had cooled in the wake of their breakup. While they each are fostering latent romantic feelings for the other, there seems to be an implicit understanding that such pursuits are not on the table currently. He even talks her down from her overly ambitious book schedule and encourages her to find a new path forward, resulting in Jane deciding to go back to grad school for writing.

Meanwhile, Xiomara and Rogelio are busy trying to be friends while also working on their Las Vegas stage show. Working out the staging reveals that Rogelio has a secret fear of heights that Xiomara helps him cover up in order to protect his image, an act of true kindness and friendship. Rogelio’s reaction to her selfless act, however, sure makes it seem like he’s feeling more than friendly feelings towards Xo again, making for much potential drama in next week’s season finale.

House Solano
Rafael and Luisa need to decide what to do about some complicated hotel business that doesn’t have a lot of relevance beyond the fact that it would require Rafael to attend a meeting overseas. He then, at Jane’s doctor’s appointment, inquires after the likelihood that Jane may go into labor while he’s gone, not wanting to miss the birth of their child. In the end, he opts not to go, as some grand gesture that he’s not an obsessive workaholic.

Jane is resolute in her wish for sole custody, but assures Rafael that it doesn’t mean that she doesn’t want him to see the baby. Merely that the Marbella isn’t a good environment for their child. Rafael argues with her and eventually Petra tries to make herself look good by going to Jane on his behalf. However, Petra is eventually outmaneuvered by Jane and Rafael when they exploit Petra’s lingering feelings for Rafael so that Petra will throw her mother under the bus and force her to confess to her attack on Alba. It’s a little mean to use Petra’s feelings against her, but probably no worse than any of the manipulations that Petra has pulled on the pair in her day.

By episode’s end, Jane and Rafael are on better terms, but she mentions to him how she feels like she’s moved past the hurt and anger of their breakup and is ready to just focus on being good parents to their child. Rafael is noticeably deflated by her words, and when he tries to call her later to declare his true feelings to her, Xiomara sends the call to voice mail, so as not to disturb Michael and Jane who are talking on the porch.

House Policia
Michael gets a special commendation for his work on the Sin Rostro case, a ceremony which he takes Jane along to as a not-date, but feels guilty for letting Nadine go free knowing her involvement with the drug lord. He also assures Jane that Luisa has been cooperating with the police in their attempts to locate Rose, and he even gets an accidental win when Petra forces Magda to admit to her attack on Alba. All in all, it’s not a bad episode for old Michael, who is almost certainly dying in next week’s season finale.

House Telenovela
Rogelio returns from filming on location. He brings Jane an ugly necklace and expounds upon his desire to win an EGOT, making his transition to Tracy Jordan complete.

Big Twist
Jane has a BIG OL’ case of glowy heart for Michael.

Burning Questions (and Some Answers)