For many of Mad Men’s writers, directors, producers, and designers, the most satisfying moments of the “Person to Person” season finale had nothing to do with the fates of Don, Peggy, Joan, or Roger. The staff had their own close-ups to watch for. As a salute to his iconic show’s behind-the-scenes talent, Matthew Weiner secretly sprinkled cameos of many of them throughout the finale and other episodes this season. Here’s Vulture’s exclusive look at some of the staffers hiding in plain sight. 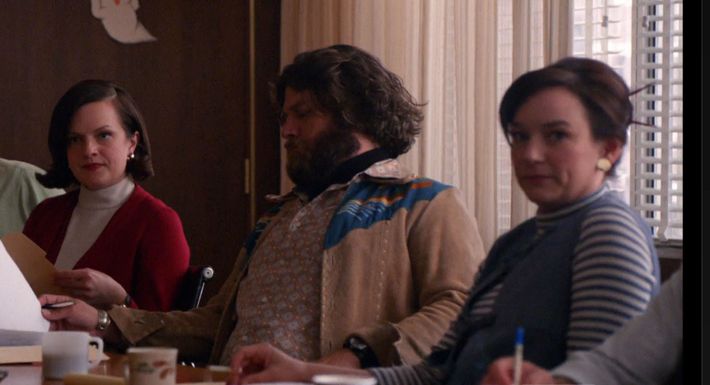 Peggy and Stan weren’t the only creatives attending the McCann accounts meeting. That’s co-executive producer and writer Semi Chellas (who co-wrote “Lost Horizon” with Matt Weiner) to the left of Stan (above), and first assistant director Adam Ben Frank to the left of Chellas (below).

Supervising producer and writer Erin Levy (right) hugs it out with another retreat attendee. Levy began as a writing assistant and went on to win an Emmy for an episode she co-wrote with Weiner (“Shut the Door. Have a Seat.”). You can also catch her in the final cliffside salutation. 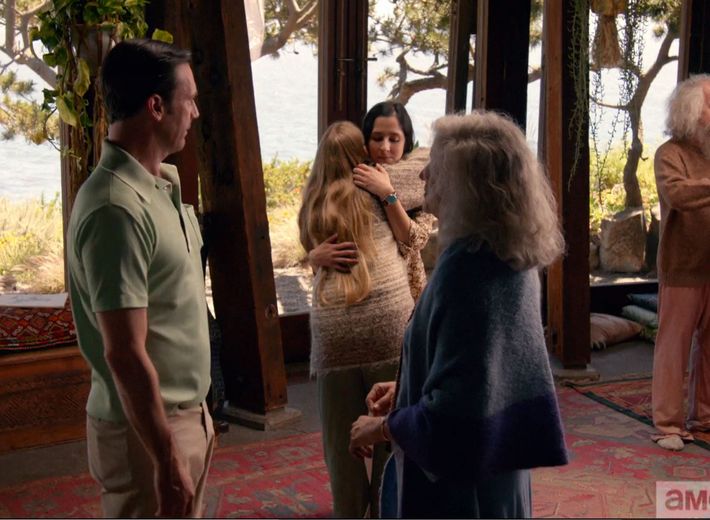 Guess who’s about to overhear Stan’s declaration of love to Peggy? That would be production designer Dan Bishop. 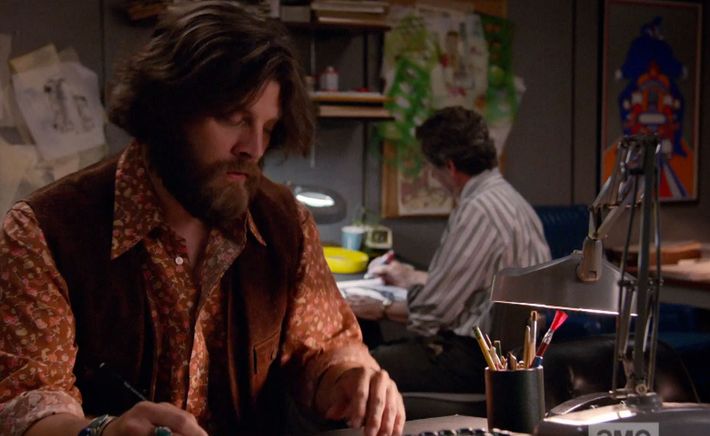 Weiner’s son Marten, who played Glen Bishop, isn’t the only family member on the show. Weiner’s wife, Linda Brettler, takes on secretarial duties for Pete in “The Milk and Honey Route,” as Duck Phillips maneuvers him into the Learjet job. 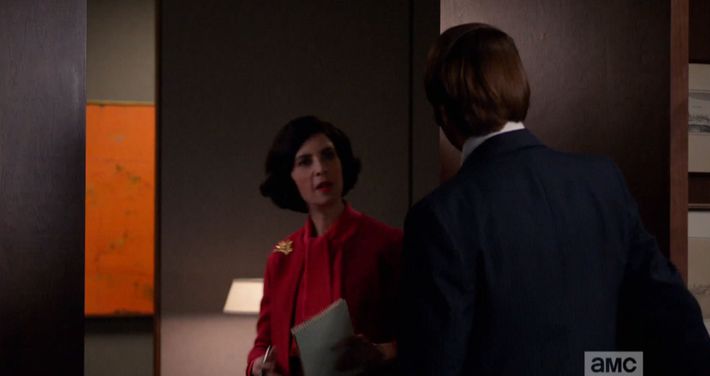 Also appearing in this episode is co-producer Marcy Patterson, popping out of the Legion Hall confection replete with flag costume.

“You said you didn’t want actors,” Stan reminds Peggy in “Time and Life.” The show’s longtime casting director Laura Schiff looks on as Peggy tries to get kids to play with toys.

last night on late night 1:01 a.m.
Let Leslie Grossman Play Erika Jayne on American Crime Story To Sarah Paulson’s Tom Girardi.
theater review Yesterday at 11:09 p.m.
Fairycakes Never Takes Flight A play employing every theatrical sprite is pinned down by its leaden meter.
ed near-an Yesterday at 10:53 p.m.
SNL: Patton Oswalt and The Mountain Goats Suggest Replacements for Ed Sheeran “No Children” is viral on TikTok. Think about it, Lorne!
overnights Yesterday at 10:40 p.m.
Insecure Season-Premiere Recap: Back To Where We Started Insecure’s final season kicks off with a tension-filled college reunion. No better place to confront one’s fears, right?
overnights Yesterday at 10:02 p.m.
Succession Recap: Relevant Donuts The Roy children consider taking “a pop at the champ.”
overnights Yesterday at 10:00 p.m.
The Real Housewives of Salt Lake City Recap: You’re Not My Mom Believe it or not, Jennie’s not into the sister-wife thing.
overnights Yesterday at 9:06 p.m.
The Real Housewives of Potomac Recap: Crabs in A Barrel Must be the season of the rebrand.
obits Yesterday at 6:31 p.m.
Friends Star James Michael Tyler Has Died The actor, who played Gunther, was 59.
familia Yesterday at 4:55 p.m.
Vin Diesel Walked Paul Walker’s Daughter Down the Aisle Nothing stronger than family.
memorial Yesterday at 3:32 p.m.
Husband of Halyna Hutchins, Rust Cinematographer, Speaks on Tragedy American Film Institute has created a scholarship in honor of Hutchins.
overnights Yesterday at 1:39 p.m.
Saturday Night Live Recap: Jason Sudeikis Makes a Sharp Return Jason Sudeikis is a sketch-comedy Swiss Army knife in his SNL-hosting debut.
snl Yesterday at 1:00 p.m.
Kieran Culkin to Host SNL on November 6 Musical guest Ed Sheeran has tested positive for COVID-19.
snl Yesterday at 2:55 a.m.
Jason Sudeikis’s Vance Revives SNL’s ‘What Up With That?’ Along with Kenan Thompson and Fred Armisen.
set updates Oct. 23, 2021
The Rookie Commits to Only Using Airsoft Guns, Banning ‘Live’ Guns on Set The decision is in response to the tragedy that happened on Rust.
pharbz rise up Oct. 23, 2021
Phoebe Bridgers and Matty Healy Surprise Fans With the Duet of Tumblr’s Dreams *Cries in jean jacket and Doc Martens*
tired (swifties' version) Oct. 23, 2021
Taylor Swift Leaves More Clues for TiRED Swifties How can we connect this news to the next four Fridays?
remembrances Oct. 23, 2021
The Naomi Shelton We Knew An evening remembering the late Gospel Queen, village voice, and forever friend.
By Saki Knafo
obits Oct. 23, 2021
Peter Scolari, Girls and Bosom Buddies Star, Has Died The actor was 66.
explainers Oct. 22, 2021
Everything We Do and Don’t Know About the Fatal Rust Set Shooting The camera crew had reportedly walked off the set to protest work conditions earlier that day.
he's back Oct. 22, 2021
Hayden Christensen Is Reprising His Role As Anakin Skywalker In the live-action Star Wars series Ahsoka, starring Rosario Dawson.
More Stories