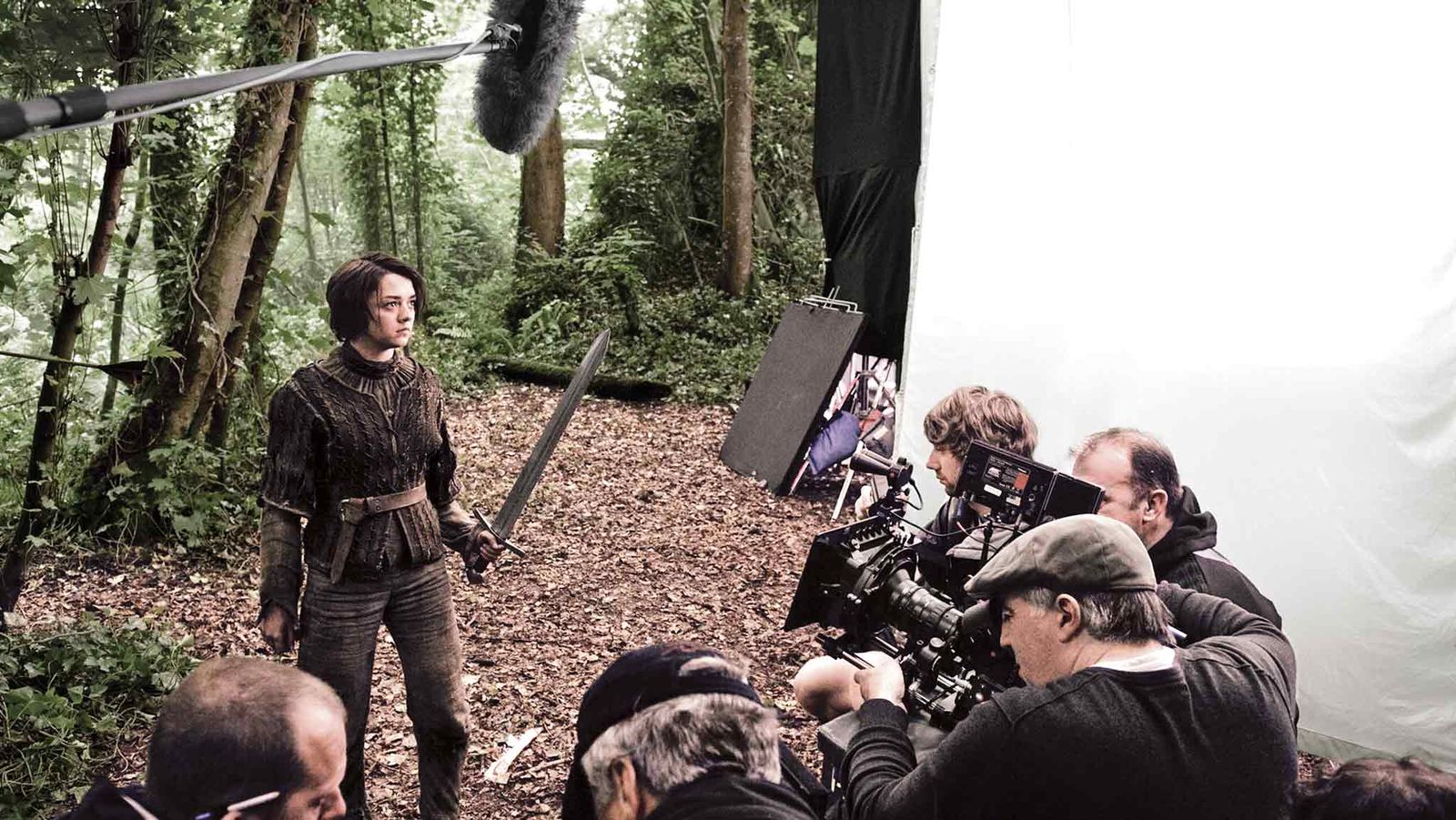 Growing Up on ‘Game of Thrones’

What Maisie Williams has learned from Arya Stark.

By Jennifer Vineyard
Photograph by Helen Sloan/courtesy of HBO

Arya Stark is begrudgingly sweeping the floor, glumly pushing a broom, waiting for her chance — will today be the day she gets to kill? The director yells, “Cut!” and out from Arya’s grungy brown tunic Maisie Williams emerges. Gone is the sullen look, replaced by a goofy grin. The actress’s shoulders shimmy, and her hands start chopping the air in a dance move that belongs more to a pop-music video than Game of Thrones. The 18-year-old actress, in her fifth season on the HBO show, doesn’t let her character’s darkness linger between takes. On this chilly October day, she’s filming a season-five scene that takes place inside the House of Black and White, a temple for those who worship the god of death and help do his bidding (in other words: It’s a school for assassins). We’re supposed to be in the fictional city of Braavos, but it’s actually Belfast in Northern Ireland, where a wedge of Titanic Studios is doubling as this mythic space, lined as it is with ominous statuary and flickering fires tucked into shadowy alcoves. Arya, who, at this point in the saga, has given up looking for any of her surviving family members, hopes that this place will provide her with the tools needed for revenge. And Williams, who has played the role since she was 12, is reveling in the fact that her character is becoming someone new, and she’s comfortable with the moral ambiguities inherent to the transformation.
As Williams says, “She’s a bit of a bitch.” After all, last season, Arya coldly left her erstwhile guardian the Hound to die after he was wounded while defending her. “She’s got a hole in her heart that she fills with all the eyes she’s going to shut forever,” adds the actress, in her bright Bristol accent. “But it’s a lot harder to let go of your own hate than she thinks.”
That descent into darkness would be hard enough for a seasoned actor to embody, let alone someone with Williams’s scant CV. Arya is her first professional acting role. (Author George R.R. Martin told me her audition was “great,” a “beautiful” scene.) Showrunners David Benioff and Dan Weiss admitted that they got lucky when they found Williams, considering how much of a gamble it was that as the seasons progressed she’d be able to keep up with the emotional demands of playing Ned Stark’s rebellious youngest daughter, a character some see as the heart of the show. “You never know how raw talent is going to develop over the long run,” Benioff and Weiss explained in a joint email. “The fact that she’s developed into an actress of astounding subtlety, range, humor, and intensity is entirely due to her work ethic.” Their first glimpse of that mind-set came when Williams, naturally right-handed, learned how to wield a weapon with her left, since that’s how Arya fights in Martin’s A Song of Ice and Fire source novels.
Accompanied by her tiny sword Needle, the child Arya progressed from playing to slaying pretty quickly. (Her first kill was in season one and largely accidental.) But as a preteen, Williams didn’t have an easy time conceptualizing her character’s complicated turn, particularly when the show’s penchant for violence came to the fore. Her mother studied the Arya chapters of the ASOIAF books so that she could offer guidance. But she could only do so much. Williams remembers asking, “How do I play [Arya]? Do I pretend that I am this little tomboy? Or am I a killer?”

The answer, of course, is both. Arya is victim and villain, good and evil, heroine, and as her journey continues, antiheroine. As Williams has matured, she’s learned to embrace her own dualities. She, too, is a tomboy who grew up eagerly climbing trees, but she also worshipped at the altar of Audrey Hepburn, likes to wear red lipstick, and dons frilly frocks for public appearances. (But nothing too girlie. Her dress for the 2014 Comic-Con was made entirely of comics.) One of the things that excited her most this season was finally getting a makeover and ditching the Arya costume she’d worn the past three seasons. “She was like, ‘I want to set fire to it! I want to throw it in the water!’ ” says costume designer Michele Clapton.
Williams has been homeschooled since she was 14 and didn’t sit for the GCSE exams that most British teens take, yet she’s got an intellectual bent and a curious mind. While on set in Belfast, Bryan Cogman, a producer responsible for Arya’s plot line, shared how Williams constantly peppers the crew with questions about the Thrones cosmology. “We’ve been answering her philosophy questions,” he says teasingly. In her defense, Williams counters that the House of Black and White contains a plethora of oversize religious symbols and statues, ones that even the most devout fans probably wouldn’t recognize. “Being on the show doesn’t make things any less confusing!” she says.
Despite being fiercely private about some aspects of her life, Williams is a big sharer on social media — offering the kind of quick-witted tidbits that go viral almost immediately. Case in point: the Vine she posted in reaction to the show’s infamous Red Wedding bloodbath, where she mugged in a vague southern accent: “They dead, like so dead, like O-M-G dead, my mother and my brother, dead!”
Williams has built a huge following — 1.7 million combined on Twitter and Instagram — with that sort of charming silliness (see also her photos of her nose ring), and she’s become increasingly at ease airing her ideas about politics and feminism. Her most recent clip exhorted British youth to vote in the upcoming U.K. general election. “They think you’re a self-obsessed, selfie-stick-waving generation,” she says in the video. “They’re counting on that. They’ve kicked your future in the teeth and hoped you wouldn’t notice.”
But even though she’s a social-media maven, she’s not as keen on some forms of it as she once was. Vine, for example, is now out. “I used to find it really funny,” she says regarding the video-sharing app. “Now it’s just full of racism. It’s not something I want to be associated with.” If it’s possible, Williams seems even more self-possessed than the ferociously determined Arya. When she’s not in costume, she wears images of skulls on the nails of her ring fingers, “because I’ll never wear a ring there.” Thanks to her parents’ separation, she’s come to the conclusion that marriage is “extremely pointless … being married would be being trapped.” But since her mother’s last name is Pitt — a name she’d prefer to have — I can’t help but joke about her making a nuptial exception for a certain movie star. “I was staring at Brad Pitt at the SAG Awards!” she admits. “It was so embarrassing.” She tries it out, with a laugh: “Maisie Pitt.”

Despite their shared headstrong tendencies, Williams is careful to separate herself from her character, especially since Thrones fans often conflate the bubbly actress with her killer counterpart. She’s even developed a habit of speaking about herself in the third person, just to prevent confusion. “When I tweet something normal about Maisie, everyone relates it to Arya,” she says. “Arya and I are similar in ways, but we’re different people. What Arya knows is not what Maisie knows.” Indeed, Arya Stark is not tweeting pictures of her pet turtle and Maisie Williams is not gutting people. “Not that you know of,” Williams jokes. “We can’t speak about that right now.”

Given Arya’s rising death toll, Williams finds it upsetting that people fail to see the troubled child underneath the badass exterior. “Why is everyone amused?” Williams asks. “It’s insane! No one can go through all this and be fine. It’s not a superhero movie.” Murder victims are victims, after all. “You don’t know their side of the story,” she says.

Arya, though, is less philosophical about the whole murder thing. Back on set, Williams casts a glance at an actor lying prone on the floor, having received the “gift” of a painless death. “There are no second chances with Arya,” she muses. “It’s like, hurt me once, shame on you. Hurt me twice, shame on me. But actually, it’s hurt me once and you die.” And then she starts to giggle.

*This article appears in the May 4, 2015 issue of New York Magazine.

+Comments Leave a Comment
Maisie Williams on Growing Up on Game of Thrones
his way 17 mins ago
Usher Confesses Once More on NPR’s Tiny Desk Concert Ushering into July with some sweet songs.
overnights 8:20 p.m.
The Real Housewives Ultimate Girls Trip: Ex-Wives Club Recap: All Tea, All Shade How do you solve a problem like Dorinda?
ouch 6:25 p.m.
Lena Headey Is Being Sued for a Cut Thor: Love and Thunder Role Her now-former agency alleges that she owes $500,000 for it.
coming soon 6:08 p.m.
Strangers, Andrew Scott’s New Movie With Paul Mescal, Sounds Hot Mescal’s character will “puncture the rhythm” of Scott’s “everyday life.”
let's go grandmas 5:10 p.m.
Miles Teller Should Be the Next James Bond, Says Miles Teller’s Grandma “Miles is very proud of his genetic connection to the British Isles.”
timelines 4:47 p.m.
The Complete History of Ezra Miller’s Controversial Career The woman Miller appeared to choke in a 2020 video from Iceland recounts the incident.
good one podcast 4:19 p.m.
Cristela Alonzo Needed a Decade to Process Greg Giraldo’s Advice  “You don’t have to listen to everybody’s notes, but if you respect them … maybe listen and see if it works with what you’re doing.”
no rest for the tickets 4:00 p.m.
New York Is Finally Making Ticket Prices More Transparent A bill that bans hidden fees and requires resellers to show original prices has been signed into law.
the classics got no respect today 3:35 p.m.
Glenn Frey Would Not Approve of This Nonsense A brawl broke out among VIP guests at an Eagles concert, during “Take It Easy.”
in a material world 3:20 p.m.
An Immaculate Collection of Details About Madonna’s Self-Written Biopic Starring Julia Garner as Madame X herself.
the industry 3:02 p.m.
Randall Emmett, Producer and Vanderpump Rules Ex, Faces Abuse, Fraud Allegations The king of the “geezer teasers” allegedly mistreated business partners, employees, and women (including ex-fiancé Lala Kent).
bpe 2:29 p.m.
The Songs of Girls5eva, Ranked They’re gonna be famous 5eva, but which song is No. 1?
knock knock 2:00 p.m.
31 Comedians Share Their Favorite Joke-Joke From puns to chickens crossing the road to giving Willie Nelson a blowjob.
By Jesse David Fox and Jason P. Frank
rip 1:44 p.m.
Sonny Barger, Hells Angel Turned Sons of Anarchy Guest Star, Dead at 83 He died of cancer according to a Facebook post.
funny videos of the month 1:30 p.m.
The Best Comedy Shorts of June 2022 Rounding up our favorite funny videos of the month.
By Luke Kelly-Clyne and Graham Techler
b7 1:25 p.m.
Everything the Beyhive Knows About Beyoncé’s Renaissance Time to overanalyze the album art.
scams 1:10 p.m.
Chloe Fineman Might’ve Gotten Got by Anna Delvey The SNL star is still waiting for a sketch she paid for, knowing everything we know.
theater review 12:58 p.m.
A Hamlet That May Have Been Nobler in the West End Robert Icke’s production lost something on its way across the Atlantic.
vulture 10x10 12:00 p.m.
The Choreography Puzzle 10-Across, Five Letters: Cake Boss goop.
life in blood red 11:05 a.m.
MGK ‘Clinked’ a Champagne Glass on His Head Because ‘There Were No Forks’ The “I Think I’m OKAY” singer thinks he’s going to be OKAY.
More Stories