NADA New York offers an alternative to chic, sleek Frieze New York. As befitting the two different fairs, we offer two evaluations of the work on offer at NADA below, from SEEN’s two staff writers.

Kyle: Zombie Formalism, Undead
Located inside Basketball City, that warehouselike gymnasium on the water off the brick towers of the Lower East Side, the fair has something of the atmosphere of a middle-school dance, what with the scoreboards folded up toward the ceiling. Also like a middle-school dance, NADA is filled with participants who have a lot in common and want to get along with each other, so they tend to follow a herd mentality.

The fair is smaller, more accessible, and more uniform than Frieze. What the kids are wearing this spring seems to be a mutant variant on “zombie formalism,” which is more undead than ever. Coined in April of last year by critic Walter Robinson and echoed by our own Jerry Saltz, the term refers to a loose, gormless, novelty-seeking form of abstract painting that hedges every bet at relevance. At NADA, the zombies have moved off the canvas and onto every surface imaginable.

There’s a sculpture with domestic metal objects rotating around a magnetic pole driven through an Ikea shelving unit at 247365 gallery, immaculately generic. Squishy blobs proliferate in vacuum-sealed paintings and bean-bag podiums. The Hole is showing wall-size spray-painted canvases of lazy color fields by Zane Lewis on top of walls covered in the same plastic tarp that they would have presumably been sprayed on top of. An elegant wall-mounted ceramic version of zombie formalism could be found with Brie Ruais’s work at Nicole Klagsbrun, offered at $22,000.

Painting itself embraced either a strategy of adaptive collage or accepted an inability to choose a path among the myriad offered by art history. Abstraction? Figuration? Josh Reames’s gently trompe l’oeil canvases at Johannes Vogt ($9,500) swiped right on all of it, presenting isolated elements of gestural abstraction floating with symbolic icons — cigarettes — in a vacuous empty pictorial space.

Elsewhere, painter Ted Gahl molded canvases over paint-stirring sticks in geometric patterns ($6,500) alongside larger works that manage to bring back to life the good parts of modernist abstraction the way Mad Men has revived the ‘60s ($14,000). Japan’s manic pixie dream girl, Misaki Kawai, has packed Eric Firestone Gallery’s booth with acid-colored, impasto cartoons and custom furniture — might you be decorating a kids’ room?

On the opposite side of Zombie Formalism, heating up the basketball court, were Jansson Stegner’s highly figurative softcore cheerleader portraits at Brussels’s Sorry We’re Closed gallery. Like a Waspier version of John Currin (if that’s even possible), they demonstrated that the human body still has more than enough life left in it to sustain creative interest. In fact, the human body was much in sight on the deck of Basketball City, the only area in the fair from which the wide expanse of the East River was visible. As the sun set, there seemed to be more people crowding the picnic tables and jostling one another for free guacamole than inspecting the work on the temporary walls.

Nate: The Un-Instagrammable Fair
Sure, there might have been enough of the kind of formless abstraction decried on this site and others, but the one thing I’ve noticed is that they don’t play too well on Instagram. And I don’t mean to belabor a point here — I talked about the Instagramming at Frieze, and how it related to those Richard Prince works at the Gagosian Gallery booth — but when a small fair of generally inexpensive works generates thousands upon thousands of pictures tagged #nadany, it should be involved in the conversation.

You can’t asses the quality of a work based on how many “likes” it gets—perhaps you should do the opposite, really. But the truth is, those works of “zombie formalism” that do indeed take up a decent amount of real estate down at Basketball City, well, they’re not exactly setting the internet on fire. Our good friend @Freeze_de (who is, sigh, an anonymous satirical Instagrammer, but bear with me) might have summed it up best in this post: “What an exciting time to be alive.” Nothing against the work necessarily, but the kids aren’t gonna double-tap a Ted Gahl.

So, what exactly did get snapped and posted the most? Well, it’s pretty hard to ignore the giant Elizabeth Jaeger sculpture Maybe We Die So the Love Doesn’t Have To, which is a sculpture of a man and a woman mid-coitus and looking perfectly smiley because of it. There’s a captivating felt work by Jonathan Baldock of guy with a Fu Manchu — really big Fu Manchu, really awesome Fu Manchu. We have Chloe Wise giving the people what they want with her Ain’t No Challah Back (Pack) Girl — yes, it’s a backpack that’s seemingly fashioned from a Challah loaf — and a newer sculpture of a stack of pancakes.

Works that what I would have Instagrammed if I used the thing more often probably would have been works by Sam Lipp, Chloe Siebert, and Puppies Puppies in the Courtney Blades booth — especially one of Lipp’s Michael Jackson paintings, which were somehow both skin-crawl creepy and warm, almost loving. Perhaps there’s exploring to do in what seems like an exciting gallery scene in Chicago, where Courtney Blades opened five years ago. And Betty Tompkins’s Fuck Painting #10, at Louis B. James, is marvelously explicit, showing how babies are made in all its beauty. Come to think of it, that would probably get me banned if I posted it.

But I would be remiss to leave out what was probably the most photographed work of them all: the “taco toast” — a much-improved spin on the normal art-fair Champagne toast — on the sun-washed riverside dock behind the fair, where everyone got free food from Café El Presidente and beer and cocktails to go with it. There were some bright spots at NADA, but it’s hard to compete with free tacos. 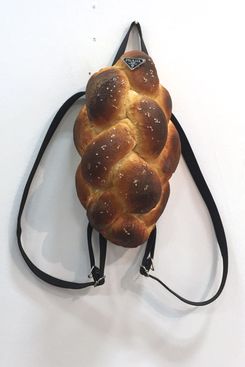 tributes 29 mins ago
The Music Industry Mourns Fleetwood Mac’s Christine McVie Even Bill Clinton said goodbye to the Songbird.
gma3 goss: what you need to know 6:23 p.m.
Sorry, Were We Interrupting Something on GMA3? T.J. Holmes and Amy Robach were a giggly duo of hosts for the first time since news of their relationship broke.
villainous behavior 6:03 p.m.
Los Espookys Canceled by HBO, Enemies of the Moon HBO needs to sit in the corner and think about what they’ve done.
oscar futures 5:37 p.m.
Oscar Futures: Is the Academy Ready to Forgive Will Smith? He’s banned from the ceremony for the next ten years, but could Will Smith nab a nomination for Emancipation anyway?
By Nate Jones
tributes 5:07 p.m.
Takeoff’s First Posthumous Verse Appears on Metro Boomin’s New Album Alongside A$AP Rocky on “Feel the Fiyaaaah”
power rankings 4:46 p.m.
The Final Survivor Season-43 Power Ranking A last look at who is in the best position to win it all.
vulture lists 4:30 p.m.
A Ranked Guide to John Wick–Inspired Movies Evaluating the latest generation of stunt-heavy, fist-fighting action movies, including this weekend’s Violent Night.
follow friday 4:20 p.m.
Brian Robert Jones Has a Root Canal After This We chatted with the musician about being a rough hang, boy bands, and Caleb Hearon.
delectable 4:18 p.m.
Hollywood Couldn’t Risk Making a Movie Like Bones and All Luca Guadagnino knew Hollywood didn’t have the requisite taste for flesh. So to finance his first American-set movie, he turned to an Italian backer.
masters of press 3:41 p.m.
Keke Palmer’s Nope Press Tour Deserves an Archive She does her Angela Bassett impression … with Angela Bassett!
theater review 2:45 p.m.
Ain’t No Mo’ Takes a Jubilantly Unrespectable Flight to Broadway Jordan E. Cooper’s satire doesn’t button up in a bigger venue.
now streaming 2:42 p.m.
The 5 Best New Movies and TV Shows to Watch This Weekend Let Matt Rogers and David Harbour usher in your holiday season.
fandom 2:35 p.m.
No, That Wasn’t Danny DeVito You Just Saw at a Party in Bushwick Just hundreds of semi-bald lookalikes.
vulture lists 2:26 p.m.
The Most Horrific Twilight Character Backstories, Ranked by Absurdity You only get a glimpse of Stephanie Meyer’s twisted mind in the movies, but the books really let the freak flag fly.
ho ho ho 2:18 p.m.
Sexy Santas, Ranked There’s something about that twinkle in his eye …
awards szn 2:04 p.m.
New York Film Critics Circle Gets the TÁR Love STÁRted Along with wins for RRR, Aftersun, and Marcel the Shell With Shoes On.
workaholics 1:47 p.m.
So You Thought BTS Was Going on Break? LOL A guide to their solo projects and upcoming group activities (so far).
overnights 1:33 p.m.
Slow Horses Recap: Walk Into It After the combustible season-two premiere, “From Upshott With Love” taps the brakes a bit too hard.
the industry 1:13 p.m.
What the Holiday 100 Reveals About Our Love of Christmas Music It’s Mariah’s world (obviously) — but Ariana and Kelly are settling into it.
going analog 12:42 p.m.
Patti Smith’s Worldview Finds a New Format in the Beautiful A Book of Days The punk icon’s visual artistry is on full display in her new photography collection.
More Stories