Nicolas Cage: You know him for his hair, his good movies, his bad movies, and that infectious, often insidious laugh. Last year Cage teamed up with Taxi Driver and Raging Bull scribe Paul Schrader for The Dying of the Light, a film written and directed by Schrader that was allegedly butchered by producers and consequently disowned by both Schrader and Cage.

Now Variety reports that Cage has re-teamed with Schrader for Dog Eat Dog. Even better news: Deadline reports that Schrader will have complete creative control, something he hasn’t had in a long while. Schrader, pulling no punches, posted on Facebook: 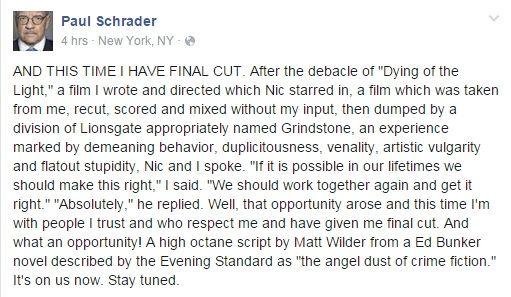 Schrader describes the film as a crime thriller. “Ed Bunker is the crime writer’s crime writer… He’s in the pantheon and one of the main people who define modern crime writing. He lived the life and lived to tell the story. Dog Eat Dog is Bunker at his best.”

vulture 10x10 13 mins ago
The Confessional Puzzle 25-Across, Three Letters: One of many in Sydney Sweeney’s collection.
olivia newton-john 13 mins ago
John Travolta, Mia Farrow, Dionne Warwick, and More Remember Olivia Newton-John “Yours from the first moment I saw you and forever! Your Danny, your John!”
a long talk 11:39 a.m.
Wes Studi Traveled His Own Road Here On his time in Vietnam, his activism in the American Indian Movement, and his first romantic lead role in A Love Song.
By Bilge Ebiri
mann up 11:24 a.m.
Michael Mann’s First Novel, a Sequel to Heat, Is a Work of Obsession One that occasionally deploys jet-fighter metaphors in sex scenes.
By Chris Stanton
overnights 11:17 a.m.
Only Murders in the Building Recap: What Turns Up in the Dark A citywide blackout sends the Arconia into darkness while OMITB threatens to lose the plot.
overnights 11:15 a.m.
The Bachelorette Recap: Him? Excuse me, but I absolutely did not sign up for a television program whose main character is Logan.
copyright law 10:00 a.m.
Taylor Swift Says You Can’t Copy Lyrics You’ve Never Heard The “Shake It Off” singer claims she’s never heard 3LW’s “Playas Gon’ Play” in a lawsuit.
barbra's babies 9:24 a.m.
Who’s the Greatest Star? A Timeline of Casting Funny Girl. Jane Lynch is now departing even earlier.
what is elon musk? 9:00 a.m.
Musk and Trump and a Little Steve Jobs The characterological origins of Tony Stark.
endings 9:00 a.m.
Let’s Talk About the Body-Horror Ending of Resurrection Its contracting ambiguity and literalness make for unexpected nightmare fuel.
By Roxana Hadadi
the industry 1:06 a.m.
WGA Members Call for Guild Coverage for Animation Projects Nick Kroll, Amy Poehler, and J.J. Abrams are among more than 850 people who have signed the public pledge.
overnights 12:39 a.m.
Better Call Saul Recap: Getting Away With It Kim proves she’s still capable of being human.
the world is healing Yesterday at 10:36 p.m.
Audra McDonald Is Finally Coming Back to Broadway As the star of Ohio State Murders, written by Adrienne Kennedy and directed by Kenny Leon.
wexler watch Yesterday at 10:25 p.m.
How Is Kim Doing After the ‘Waterworks’ Episode of Better Call Saul? It’s Kim Wexler as we’ve never seen her before.
overnights Yesterday at 10:00 p.m.
Industry Recap: Let’s Find Out How Essential You Are “I’m sick of commenting on the direction of the wind. Shall we make it blow?”
overnights Yesterday at 9:53 p.m.
Below Deck Mediterranean Recap: Dark Waters This drama between Natasha and Dave isn’t fun to talk about.
accidents Yesterday at 7:40 p.m.
Anne Heche in ‘Extreme Critical Condition’ Following Car Crash According to a representative, she has remained in a coma since shortly after the accident.
it never ends Yesterday at 7:17 p.m.
Ezra Miller Charged With Felony Burglary in Vermont After allegedly breaking into an unoccupied home and taking several bottles of alcohol.
overnights Yesterday at 6:30 p.m.
The Sandman Season-Finale Recap: Wanna Put My Tender Heart in a Blender Dream, one of the most tight-buttholed characters in fiction, has declenched.
timelines Yesterday at 6:15 p.m.
The Complete History of Ezra Miller’s Controversial Career From kidnapping allegations to cult rumors to The Flash turmoil.
More Stories