Ted 2, which cost $68 million to produce, came in third, earning only $33 million, 39 percent less than its predecessor. On Twitter, Seth MacFarlane tried to convince moviegoers to see his movie by capitalizing on this week’s historic same-sex marriage ruling, but no one seems to have fallen for the ploy. That tweet, seen below, has been subsequently deleted and replaced with much more supportive ones. 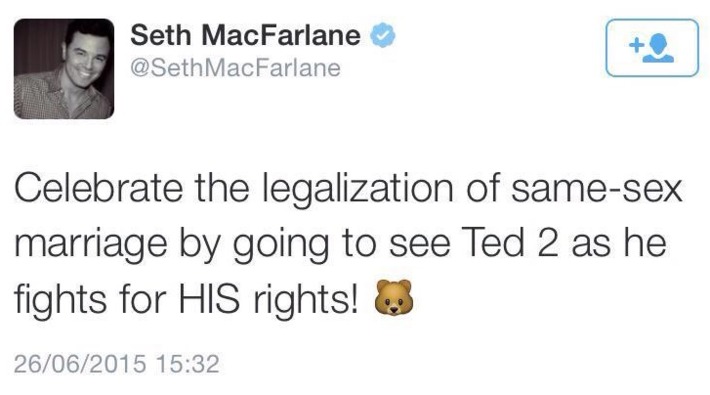 Max, a dog-centric flick that has nothing to do with madness or Furious Roads, made $12.2 million in its first weekend, while Spy keeps drawing in viewers, earning another $7.8 million for a total of $88.3 million.

On the indie side of things, Infinitely Polar Bear added 12 theaters and took in another $69,000 for a total of $133,000, while the wonderful French house drama Eden made $39,000 in 14 theaters for a slim average of $929 per theater. The drug addiction drama Heaven Knows What, one of the year’s most despondent films, made $2,000, bringing its total to $70,000. Finally, the release of the first major restoration of Carol Reed’s classic The Third Man, one of the greatest films ever envisioned, made $24,000 in three theaters.

+Comments Leave a Comment
Jurassic World Just Beats Out Inside Out