In the second season of Nic Pizzolatto’s True Detective, now set in Los Angeles, entrepreneur-cum-criminal Frank Semyon (Vince Vaughn) lives in a pretty swank house. In fact, film/TV villains based in L.A. and its surrounding areas always seem to live in really nice, modernist houses (often designed by John Lautner), the buildings’ glass surfaces and complex concrete contours reflecting the villains’ motives, madness, and megalomania. (Though sometimes a beautiful house is just a beautiful house.) We’ve compiled a list of great modernist houses in which villains have taken up residence, and asked New York Magazine design expert Wendy Goodman to rank them. Ahead, a worst-to-best assessment of Southern California’s more villainous homes. 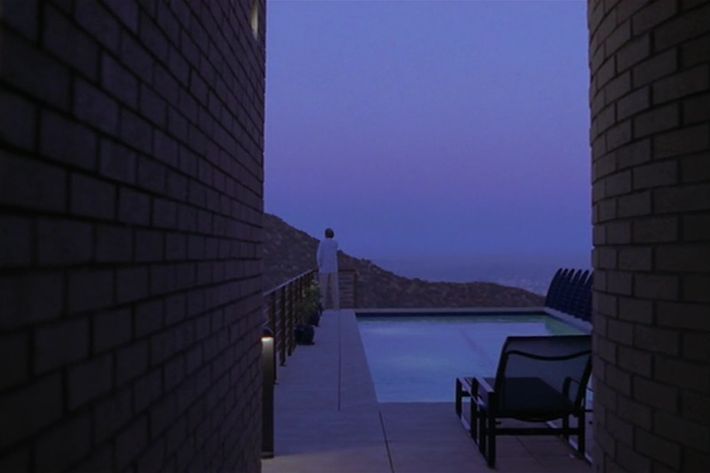 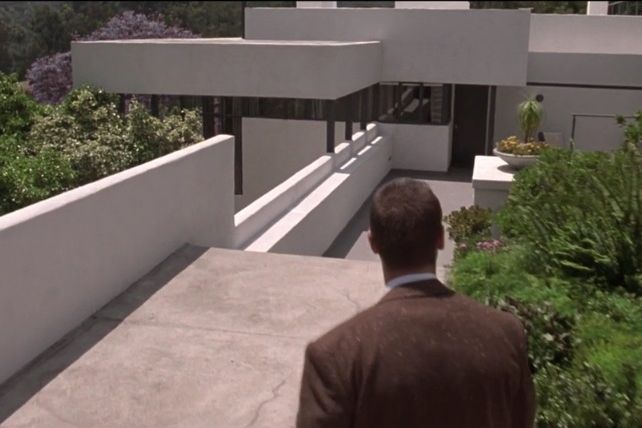 7. Richard Neutra, Lovell House, 1929 (L.A Confidential). Another modernist house inhabited by a smut king (pornographer Pierce Patchett), though this house — and this smut king — is less lavish, less foreboding. Only one of them survives the film. With its Bauhaus International Style concrete boxes massing over varying levels, the Lovell House has an austere, commanding presence. It’s not a welcoming, put-your-feet up kind of place. 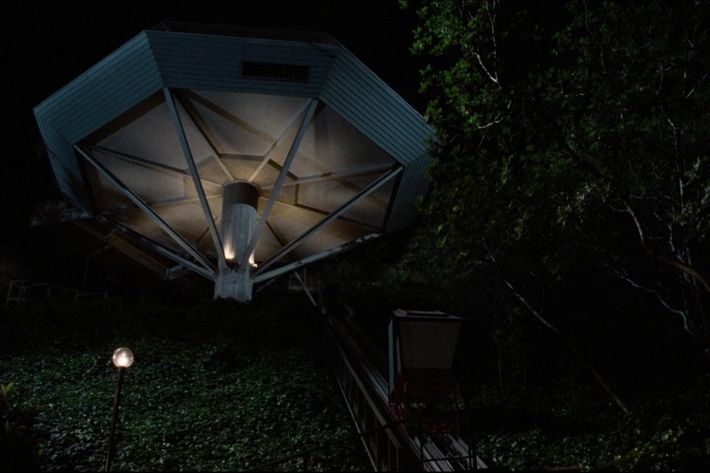 6. John Lautner, Chemosphere House, 1960 (Body Double). In one of Brian De Palma’s most meta, navel-gazing efforts, a struggling actor agrees to house-sit for a less-struggling actor friend. (The interior decorations are garish and gaudy, a bit of ’80s excess parody.) Since the house is basically one giant Peeping Tom platform, the struggling actor develops an unfortunate peeping penchant (all part of a plan, of course), accidentally witnessing a murder through his telescope. The Chemosphere seems to be Lautner’s ode to the spaceship. It’s his most daring and seemingly precarious house. It looks like an octagonal flying saucer balanced in midair on a 30-foot concrete pole. 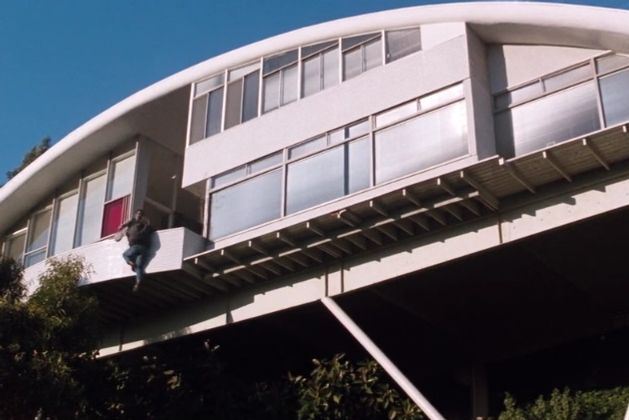 5. John Lautner, Garcia House, 1962 (Lethal Weapon). A coterie of South African officials hiding behind the veil of “diplomatic immunity” make the mistake of killing Martin Riggs’s (Mel Gibson’s) girlfriend. Riggs consequently uses his pickup truck to tear down their headquarters, which is shaped like an eye and looks out over the gorgeous landscape from the living room. There is something inviting and mysterious about this house as you travel through it. 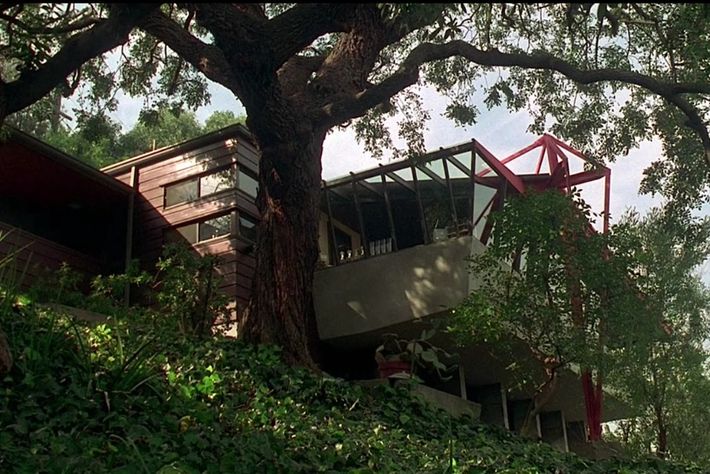 4. John Lautner, Jacobson House, 1947 (Twilight). Paul Newman’s corrupt cop, Harry Ross, receives this lovely home as a present for his squalor and misdeeds. He likes it — it’s up above the smog. Lautner brilliantly plays up the dramatic sites of his houses, and the dramatic setting of this villain hideaway is no exception. 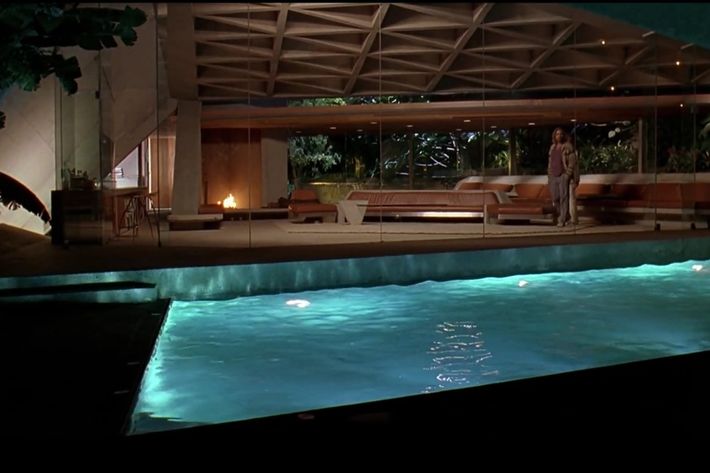 3. John Lautner, Sheats Goldstein Residence, 1960s (The Big Lebowski). The domain of the Sultan of Smut Jackie Treehorn, who drugs Jeff Bridges’s Dude and dumps him on the side of the highway, is vast and vacuous, just like its hotshot owner. One of the all-time-great visual gags, involving a pencil and a penis, happens in this scene. Another Lautner beauty built for the groovy ’60s as a pure pleasure pad with its flirty indoor/outdoor architecture and sensual interiors. 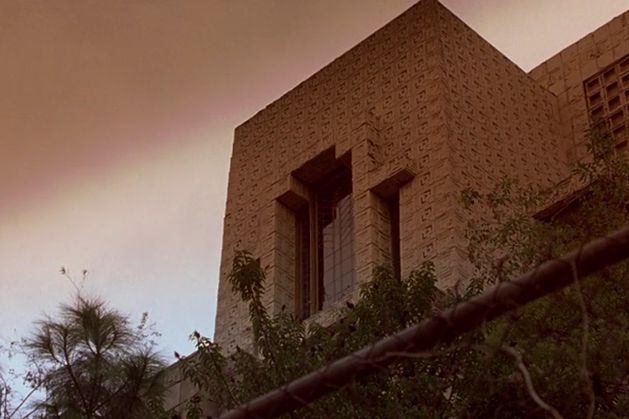 2. Frank Lloyd Wright’s Ennis House, 1924 (House on Haunted Hill, The Replacement Killers). In the original House on Haunted Hill, Vincent Price’s Frederick Loren lures several guests to his allegedly haunted home, promising them $10,000 if they can survive the night. The Gothic interiors are artificial, however, all built on soundstages. In The Replacement Killers, one of several movies to use the Ennis House to capitalize on the Yellow Peril, a powerful gangster and his cronies take up residence in the iconic building. The house looks like a fortress built for a deity, or a palace built for royalty. It’s one of Wright’s grandest and most formal. 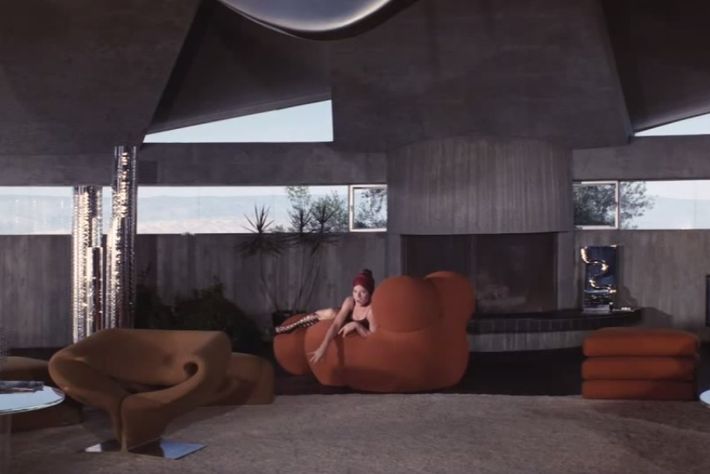 1. John Lautner, Elrod House, 1968 (Diamonds Are Forever). Sean Connery, in his last official outing as James Bond, gets trounced by Bambi and Thumper, two scantily clad henchwomen who throw Bond around the house before tossing him into a pool. Poor James. The house (actually located in Palm Springs) is one of John Lautner’s most spectacular masterpieces. Its otherworldly organic architecture harbors glamorous, sexy interiors that speak to the confidence and authority of the owners.

why you gotta be so mean? 55 seconds ago
Taylor Swift Calls Out Netflix, Ginny & Georgia for ‘Deeply Sexist’ Joke “This outfit doesn’t look cute on you,” she added to Netflix, home to her documentary Miss Americana.
golden globes 2021 26 mins ago
Jodie Foster Thanked Her Wife, Her Dog, and Aaron Rodgers in Her Globes Speech Did Jodie Foster set Aaron Rodgers and Shailene Woodley up?
now streaming 9:25 a.m.
New on HBO and HBO Max: March 2021 Godzilla vs. Kong, Zack Snyder’s Justice League, Speed, and more.
awards season 9:21 a.m.
Nomadland and Borat Subsequent Moviefilm Lead the 2021 Golden Globes Winners As well as Jason Sudeikis’s tie-dye hoodie.
oscar futures 8:54 a.m.
How the Golden Globe Results Just Changed the Oscar Race With Oscar nomination voting beginning this week, how did the HFPA’s picks affect the race?
By Nate Jones
profile 8:00 a.m.
Youn Yuh-jung Comes to America The actress’s heart-shattering performance in Minari is likely to get an Oscar nod. She’s been doing this too long to care.
By E. Alex Jung
vulture picks 7:30 a.m.
25 Notable New Releases Over the Next Two Weeks Selena Gomez’s Spanish-language EP, a new Spongbob movie, an excerpt from Klara and the Sun, and more.
at the box office 2:16 a.m.
You All Dropped the Cat-and-Mouse Game and Saw Tom and Jerry in Theaters The movie had a very encouraging opening weekend in theaters, all pandemics considered.
oprah 1:40 a.m.
Oprah Teases ‘Pretty Shocking Things’ in Upcoming Meghan and Harry Interview “Were you silent … or were you silenced?”
that's nuts 12:56 a.m.
The Golden Globes Were an Edge-of-Your-Seat Psychological Thriller The award for Best TV Series, Drama, should have gone to the awards ceremony itself.
By Rachel Handler
golden globes 2021 12:42 a.m.
This Year’s Golden Globes Were the Wrong Kind of Mess Tina Fey and Amy Poehler were fine hosts, but the ceremony overall was an exhausting reminder that this whole pandemic is really getting old.
allen v. farrow 12:39 a.m.
Dylan Farrow Addresses Allen v. Farrow Video of 7-Year-Old Self Alleging Abuse Sunday’s episode contains footage recorded in 1992 of Farrow’s abuse allegations against Woody Allen.
golden globes 2021 12:22 a.m.
Gillian Anderson Is Watching the Sun Rise Over Prague Alone Sure, she won, but at what cost?
golden globes 2021 Yesterday at 11:46 p.m.
The Highs, Lows, and Whoas of the 2021 Golden Globes From Tina and Amy making it work to Jason Sudeikis doing … whatever he was doing.
the gold rush Yesterday at 11:16 p.m.
Chadwick Boseman’s Wife Honors Him in Posthumous Golden Globe Acceptance Speech “He would say something beautiful, something inspiring, something that would amplify that little voice inside of all of us that tells you you can.”
the gold rush Yesterday at 11:10 p.m.
See Every ‘Red Carpet’ Look From the 2021 Golden Globes  Here’s to looking glam even at home.
By Savannah Salazar
golden globes 2021 Yesterday at 10:28 p.m.
That Feeling When Jason Sudeikis’s Edibles Hit Before His Golden Globes Speech “I kind of reject the premise of being the Best Actor.”
golden globes 2021 Yesterday at 10:21 p.m.
Make Beverly Jackfruit and François Jean-Rudy the HFPA’s New Black Members A.k.a. Maya Rudolph and Kenan Thompson.
overnights Yesterday at 10:02 p.m.
The Walking Dead Recap: New Sheriff in Town The extended tenth season kicks off with Hurricane Maggie blowing into A-town, with force.
red carpet Yesterday at 9:38 p.m.
Finally, Celebs Have Learned That They Must Stand for the Zoom Red Carpet The lewks simply demand it.
More Stories