If The Avengers was a sports movie, and The Winter Soldier was a ‘70s conspiracy film, then what will the new Spider-Man be? According to Marvel’s Kevin Feige, the answer is: a John Hughes movie. “It’s the soap opera in high school, and those supporting characters that are interesting,” Feige told reporters at the Ant-Man junket this weekend. “We haven’t seen a John Hughes[–style] movie in a long time … we’re inspired by him, and merging that with the superhero genre in a way we haven’t done before excites us.” But what would a John Hughes superhero movie look like? Let us present Pretty in Red and Blue, the story of a young kid from the wrong side of the 7-train tracks who longs to fit in with the cool kids. His efforts seem hopeless, until a chance encounter with a radioactive spider helps him learn to believe in himself. All he’s gotta do is try a little web-derness! 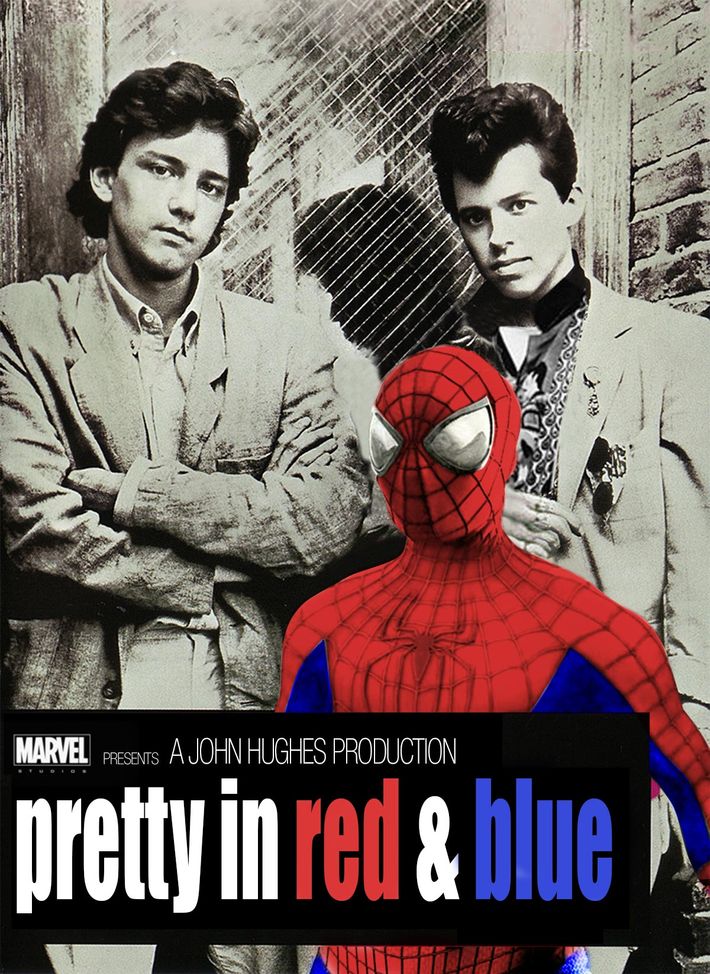 vulture lists 12 mins ago
Every Tom Hanks Movie, Ranked He might only play a certain number of notes, but he always manages to make them sound unique.
emmy insider 18 mins ago
Dead to Me Star Linda Cardellini Breaks Down Judy’s Emotional Roller Coaster In season two of Netflix’s dark dramedy, Linda Cardellini had to cry. A lot.
trump tweets 11:37 a.m.
Trump Likes Tweet Praising ‘Stripper’ Vibes in New Summer Walker Song The president baffles with another late-night Twitter “like.”
last night on late night 10:56 a.m.
Sarah Paulson Pleads the Fifth on Lea Michele Blame the AirPods? Oldest trick in the book.
emmy insider 10:20 a.m.
13 Emmy-Worthy Performances That Shouldn’t Be Overlooked Akili McDowell in David Makes Man, Shira Haas in Unorthodox, Hunter Schafer in Euphoria, and more of the year’s best TV acting.
my single is dropping 10:07 a.m.
Elvis Costello Releases ‘Hetty O’Hara Confidential,’ Second New Song of 2020 Recorded in Helsinki, Finland, along with previous song “No Flag.”
vulture recommends 9:56 a.m.
The Couch Gallery Crawl How to look at art from the safety of home.
q&a 9:00 a.m.
Margo Price, After the Storm A natural disaster delayed Price’s momentous new album, That’s How Rumors Get Started. Then disaster struck again: COVID-19.
By Hilary Hughes
read like the wind 9:00 a.m.
The Vices and 8 Other Reads I Can’t Get Out of My Head If you’re looking for a suspenseful novel containing many of the Earth’s most interesting topics — art thievery, twins, Iceland — this is it.
encounters 8:00 a.m.
Cristin Milioti, Forever In Palm Springs, she plays a furious depressive stuck in a time loop. It’s the rom-com role she was meant to play.
my single is dropping 7:57 a.m.
Katy Perry’s New Single Reminds Us All to “Smile” Or at least fake it ‘til you make it.
the grub street diet 6:00 a.m.
Playwright Katori Hall Learned How to Burn in the Kitchen “Not actually burn stuff, but cook really good.”
By Chris Crowley
my single is dropping 2:58 a.m.
Kid Cudi Teams Up With Eminem on ‘The Adventures of Moon Man & Slim Shady’ Two rappers. Four names. One song about the importance of wearing masks.
missing persons 2:15 a.m.
Glee Star Naya Rivera Presumed Dead After Son Found Unaccompanied on Boat The recovery mission has been suspended for the night, with a diver describing the lake as having “a lot of tree branches and overgrowth.”
my ep is dropping 1:51 a.m.
Let Summer Walker’s Sultry New EP Life On Earth Get You in Your Feelings “What have you become? What have you become?”
my album is dropping 12:39 a.m.
Juice WRLD’s Posthumous Third Album Legends Never Die Has Dropped The 21-track album features the rappers previously released songs “Righteous” and “Tell Me You Love Me.”
overnights Yesterday at 10:00 p.m.
The Real Housewives of New York City Recap: Proxy War Ramona is pissed because she brought Elyse onto the show and now she is not paying proper fealty.
extremely online Yesterday at 9:45 p.m.
A Glitch Wreaked Havoc on TikTok Today Reps for Tik Tok say the glitch was caused due to “higher traffic than normal on our servers in Virginia.”
lady a Yesterday at 5:34 p.m.
Anita ‘Lady A’ White Will Not Be Erased “If you want to be an advocate or an ally, you help those who you’re oppressing. And that might require you to give up something.”
By Andrea Williams
now streaming Yesterday at 5:30 p.m.
The 100 Best Movies on Netflix Right Now Da 5 Bloods, Swimming Pool, Uncut Gems, and more.
More Stories