Since 2010, when it launched here in the U.S., Spotify has been the industry leader in the music-streaming business. Now it’s on the defensive. Following the Apple Music announcement during WWDC 2015 in San Francisco this week, Spotify released a rebuttal of sorts in the form of a blog post outlining its growth.

According to the post, the company has reached 20 million paying subscribers, up from 10 million a year ago, and 75 million users worldwide. Spotify provided new figures about artist payouts and royalties as well. A “global superstar” would have earned approximately $7.7 million in the last 12 months and, if growth continues, will earn close to twice that amount next year. (Note: These are the numbers for the total payout, which means they are likely being divided between the artist, label, and publisher.) 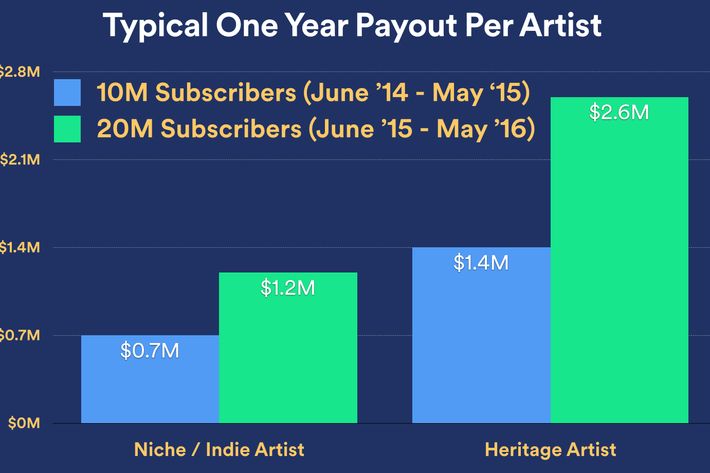 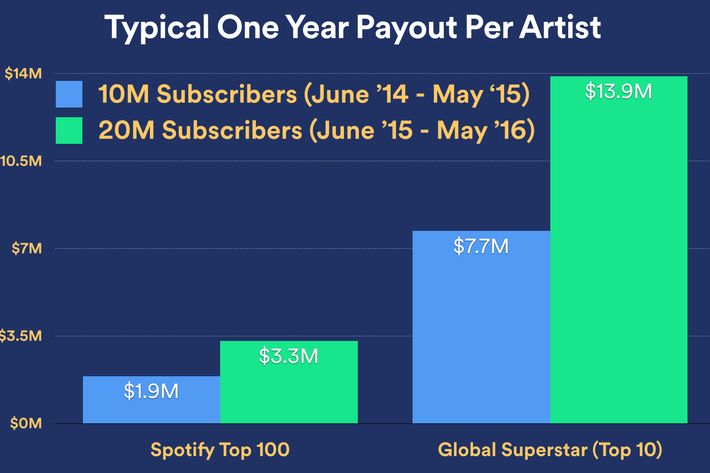 Still, there is reason for Spotify to panic. As Annie Lowrey wrote earlier in the week, Apple has a seemingly endless pile of cash to draw from:

Apple has vastly more [money] than any of the competitors mentioned, including Google. Take current industry-leader Spotify. Last year, its revenue grew a whopping 45 percent to $1.3 billion. But the company still ended up about $200 million in the red, as its spending on product development and an international expansion swamped its income. Those losses are manageable for the moment, given investors’ willingness to plow money into the rapidly expanding business. But they might not be forever, particularly not if other cash-rich companies look set to force Spotify to keep running in the red. And there is no business on earth that could do that like Apple could: It currently has $178 billion-with-a-b in cash on hand, sitting idle, seeking businesses to plunder and rivals to destroy.

(Earlier this week, Spotify also announced that it had raised $526 million in fund-raising.)

6 Things We Learned About Apple Music From WWDC 2015

Not to mention that a source at Apple tells me the company believes Sweden is the most important market for the future of music streaming, and plans to pursue growth there aggressively. Sweden, of course, is Spotify territory.

This week, Spotify CEO Daniel Ek, who fired off a low-key shady, two-word subtweet during Apple’s WWDC presentation, is scheduled to speak at the inaugural Symposium Stockholm, a multi-day conference for creatives co-founded by Ek and Ash Pournouri. The conference closes with a hot-button discussion about the future of streaming music. Ek will undoubtedly argue that Spotify is here to stay, even if skeptics disagree.

chainsaw accidents 13 mins ago
Cate Blanchett Says She Cut Her Head In a Chainsaw Accident, but She’s Fine Now It was just a “little nick.” Nothing to worry about.
overnights 5:50 p.m.
Dirty John: The Betty Broderick Story Recap: The Beginning of the End What if Betty had just walked away when Dan was late for the movies? Could all of this have been avoided?
dun dun 5:36 p.m.
SVU Showrunner Says Cop Shows Are ‘Miscontributing’ to Society He has also spoken against police brutality on Twitter this week.
police tv 5:11 p.m.
Cops Season Premiere, Live PD Episodes Pulled in Light of Protests It’s unclear whether Cops will return to Paramount.
now streaming 5:00 p.m.
The 50 Best Action Movies on Netflix Right Now Triple Frontier, Snowpiercer, Escape From New York, and more.
follow friday 4:38 p.m.
Priyanka Mattoo’s Career Advice Is a Bright Light in Dark Times Taylor Garron’s Instagram Live chat with our comedy advice columnist will make you feel good. We promise.
comedy review 4:02 p.m.
Yvonne Orji Can Turn Punchlines Into Choruses Momma, I Made It! works best when Orji’s material speaks for itself.
By Kathryn VanArendonk
tv 3:48 p.m.
Vanderpump Rules Stars Once Called the Cops on a Black Cast Member Faith says Stassi and Kristen bragged about reporting her to the police in 2018. “It didn’t work, so they were upset about that.”
tv review 3:33 p.m.
I May Destroy You Confirms Michaela Coel’s Stunning Talent An unflinching, dynamic exploration of desire and consent stands on the strength of Coel’s work as a writer, director, and performer.
roundtables 2:45 p.m.
A Roundtable Discussion on a Chaotic Week in Social Media As new rules emerge and people test the bounds of what’s acceptable online, Vulture gathers to discuss what unrest looks like on your phone.
By Craig Jenkins, E. Alex Jung, and Dee Lockett
hmm... 2:23 p.m.
Russell Simmons Accusers Say Time’s Up Distanced Itself From Documentary A THR investigation details internal skepticism around the documentary.
new york times 2:00 p.m.
New York Times Publisher Calls Tom Cotton Op-Ed ‘Contemptuous’ He reportedly said it “should not have been published.”
vulture recommends 1:51 p.m.
10 Musicians (and Then Some) Donating Toward Racial Justice on Bandcamp Today Plus 24 other musician and label recommendations, some of whom are also donating.
By Justin Curto
the replacements 12:48 p.m.
Wanted to See Wonder Woman 1984? Try These 5 Movies Instead Atomic Blonde, Unstoppable, and more.
buffering 12:30 p.m.
All Eyes on the Protests How streaming news networks are emerging as valuable resources for anyone looking to go beyond cable news coverage.
movies 12:30 p.m.
Bill Duke on the Making of His Essential ’90s Thriller Deep Cover The director contemplates the legacy of his neo-noir about cops and criminals, and what he sees in the protests sweeping the country today.
By Matt Zoller Seitz
my single is dropping 11:56 a.m.
Meek Mill Draws on Childhood, Prison for Protest Song ‘Other Side of America’ And it opens with audio of Donald Trump.
bring back my girls 11:38 a.m.
Give Drag Race Season 12 a Do-Over One of the best group of queens this show has seen deserves the full, unadulterated Drag Race experience. Enter All Stars.
john mulaney 11:34 a.m.
John Mulaney Attends White House Black Lives Matter Protest, Wears Two Masks When Mulaney said “fuck tha police,” he meant it.
vulture recommends 11:00 a.m.
The Couch Gallery Crawl How to look at art from the safety of home.
More Stories