Last weekend, comedian/former writer for Happy Endings and Brooklyn Nine-Nine Gil Ozeri watched every single episode of Entourage in a row without sleeping. This is his story.

Shhh!! Do you hear that?

That’s the sound of me crossing another incredibly stupid item off my bucket list.

This past weekend, in an act of horrifying absurdity, I decided to watch every single episode of HBO’s Entourage in a row, without a break. 96 episodes. No sleep. Just me, Vinnie, and the boys, keeping each other company for 47 hours straight. Oh, yeaaah!!!

Why would I ever do something that wonderfully dumb?  Well, to tell you the truth, I had done one of these binge-marathons before with Two and Half Men, and it turns out, it was actually super fun. And since the Entourage movie had just come out, it seemed liked the universe was almost begging me to do it again. And guess what? I had a blast: A silly, dark, delirious two-day trip down Queens Boulevard.

So here’s how it went down. Funny or Die got me a huge “Entourage-style” house in the Hollywood Hills and we live-streamed me watching every episode in a single sitting. 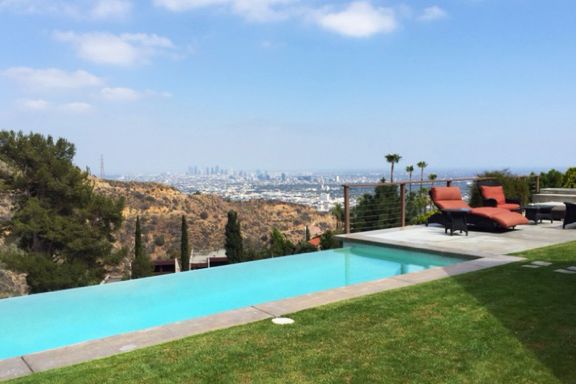 Joining me as co-hosts were my good friends Adam Pally (Mindy Project, Happy Endings) and John Gemberling (Broad City, Marry Me). We also had over 50 guests and tons of fun bits, like this adorable guy. 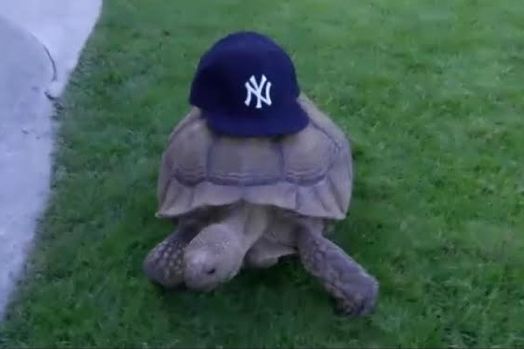 Now, before I continue, I should warn you to take everything I’ve gleaned with a grain of salt. For a good majority of the marathon, I was beyond exhausted. My brain felt like gelatin. All in all, I stayed up for a total of 57 hours. So please, allow room for error.

Here, without further ado, are my takeaways from the marathon.

1) Three-Dimensional Women Are Not the Focus of Entourage
I know, I know, how groundbreaking! But it still surprised me how not the focus women really were. You’re probably already aware that aside from the occasional girlfriend who “got in the way of the boys’ smokin’ n’ screwin’” there were not many decent roles for women on Entourage. The exceptions were Debi Mazar (whom I love) as Vince’s publicist, and Perrey Reeves as Ari Gold’s wife, who was — no joke — not even given a name until seven years into the show (up until that point she was just called “Mrs. Ari”). Very cool.

By the way, you might be wondering, Why the ½? It was a conversation between two women, but they were separated by a closed door. A female P.A. knocks on a dressing room door, and asks a woman inside the room if she’s ready to go on a talk show, and that woman responds yes. That was the whole exchange.

2) The Entourage Theme Song Is Beautiful … When Sung by Children.

I decided to hire a children’s choir and have them sing the detestable, grating Entourage theme song originally performed by Jane’s Addiction. Oh, and I also asked them to add 10 extra oh yeaaahs at the end, just cause. The choir is called Musyca. They’re perfect.

3) Infinity Pools Aren’t As Glamorous As They Seem on TV.
On Friday night, I thought it might be a good idea to watch an episode or two from inside the infinity pool at the house. We set up a TV outside and I hopped in. Huge, huge mistake. It was cold outside, the pool wasn’t heated, and the water was a freezing nightmare. 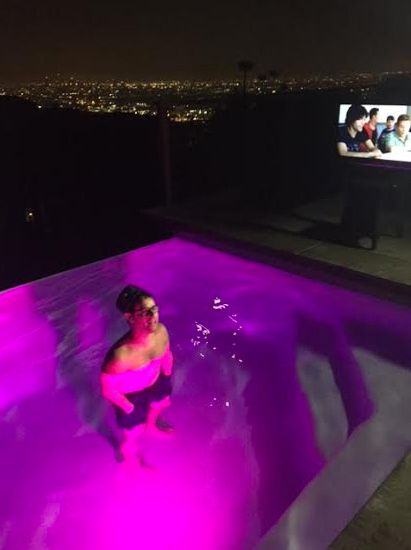 5) Real Life Entourage Is Scarier Than TV Entourage.
Late on Saturday night, after 30 hours without sleep (and a late-night party), we were visited by three guys we’d never met before. They had been invited without my knowledge. It was a guy named Hamster from Mark Wahlberg’s crew in the Entourage movie, Chris Gronkowski (Rob Gronkowski’s brother — who’s in the movie as well), and their friend. They joined me and some other guests on the couch and you could feel the mood had changed instantly. Since they had a connection to Entourage, we thought that they might be there to mess with us. It was genuinely creepy. We eventually realized they were just drunk, but that didn’t make things any better. Chris Gronkowski, who is a gigantic human, was totally wasted. The other guys were fine, but Chris was inappropriate to my sister (who was watching on the couch with us). John Gemberling pointed out that this is what it would probably be like to be friends with the Entourage crew in real life. I agree.

6) It’s Hard to Concentrate During a Party
Vin and the boys are always partying. We felt like we should too. Except I didn’t get to participate, because I had to watch TV! For an hour and a half, a party raged behind me while I had to endure more episodes of The Kings of Queens. There was smoking, drinking, a D.J. blasting music, and people dancing and grinding against me. Now that I’m hearing that, I guess it doesn’t sound that bad.

7) Everyone on Entourage Is Vince.
In Doug Ellin’s version of Hollywood, Vince and his entourage always win. We started out tallying the number of times things end up going well for the boys. It happened so often, though, that we decided to stop keeping track. I noticed that the characters on the show don’t really grow either, they just get more successful. Better jobs. More wealth. More women. Turtle sort of starts to lose his charm, what makes him unique, when he’s just as successful as Vince. By the final season, pretty much everyone in the cast is a Vince. And he was the least interesting character! So what we have here is a town full of winners, full of Vinces, a Hollywood afterlife where everyone’s successful, everyone’s having sex or being sexy, there are a million famous people hanging out and clinking glasses and everyone’s always killing it at their careers. So nothing real ever happens? I guess you could say the show is escapist junk food, but it’s hard to want to be part of the gang when they’re always super excited about “making moves 24/7” and “banging chicks.” Who wants to aspire to be them? Do they even have families? Have they ever celebrated a holiday? I bet if you asked E what Thanksgiving was he’d just stare blankly in your face and his nose would start to bleed.

8) Your Baby Bros Have Your Back.
Just like Vinnie had his entourage, I had mine. A bunch of friends came to visit me, partake in the madness, and keep me sane. Some of my personal highlights:

• Adam Pally acting confident about something and it turning out to be bullshit. There were at least 15 times when Pally arrogantly acted like he knew something and he turned out to be completely wrong.

• Singing with everyone kept my spirits up. It was Mark Wahlberg’s birthday on Friday. We had a cake and sang Happy Birthday to him at least 10 times. The best part was that it ended with the words, “And Mandy Moore!!!” in place of “And many more…”  We also sang a version of “Tomorrow” from the musical Annie, but replaced the lyrics with “Rob Morrow” (who was an actor on Entourage) – “Rob Morrow, Rob Morrow, we love ya, Rob Morrow, you’re always on Entourage!”

• Ben Schwartz visiting. Ben visited me early in the mornings and in order to keep me awake, he would force me to sing and dance and mess with me. At one point, for half an hour straight, he kept saying “Gil?” and I couldn’t stop responding “Yes?” I was very tired.

8 ½)  Animals Hate Entourage.
I counted this as a half because it’s an observation about animals and not humans. Saturday morning, a bird flew in the house and took a shit on one of the cameras. Seems like a sign to me. Or maybe that means animals hated the Entourageathon? Possibly. We were making fun of how many of them were on Vince’s shirts.

So yes, I learned 8 ½ amazing things. Before the marathon, I remember actually enjoying the first couple of seasons of Entourage (the production, the acting, etc.), but I felt like it eventually went off the rails. It got repetitive, there was an overkill of male wish-fulfillment, and they celebrated excess and douche-bro culture. It became the thing it started off satirizing. Rewatching now, I could see how other people might think the show was fun, but this time around, the monotony really stuck out to me. And maybe my opinion was affected by watching every episode at once, but there’s only so many times I could sit through the same scene of two people having a long conversation on their Blackberrys about Vince doing or not doing the goddamn movie.

Editor’s Note: Currently the videos are not working on every browser and platform. Funny or Die is working on it.

+Comments Leave a Comment
Things Learned From Watching Every Entourage

switched on pop 3 mins ago
Mark Ronson Is Still in Awe of Ginuwine’s ‘Pony’ and Its Influence on Music He’s also grateful for the time Paul McCartney snapped him out of his laziness.
trailer mix 2:06 p.m.
Camila Cabello’s Prince Charming Isn’t Shawn Mendes in the Cinderella Trailer She just wants to design dresses and maybe find a man.
housewives institute bulletin 1:30 p.m.
Is Bethenny Back? Is Sheree? Who Cares! The case against returning Housewives in this bee-stung edition of the Housewives Institute Bulletin.
hot pod 1:30 p.m.
Apple Finally Fixed Its Podcast Bug Plus: Spotify reports its earnings.
disney 1:23 p.m.
What Does the Black Widow Lawsuit Mean for COVID-Era Movies? Scarlett Johansson’s complaint against Disney is a reaction to a rescaling of studio ambitions during the streaming wars.
my single is dropping 12:55 p.m.
Tony Bennett Celebrates 95th Birthday by Announcing Love for Sale With Lady Gaga “I Get a Kick Out of You,” the lead single from the collection of Cole Porter covers, is out today.
the festival circuit 12:47 p.m.
DaBaby Pulled From Festival Lineups After Homophobic Comments DaBaby has been dropped from Austin City Limits and iHeartRadio Festival after making another apology.
capital-c casting 12:42 p.m.
Brendan Fraser Joins Martin Scorsese’s Killers of the Flower Moon With Leonardo DiCaprio, Robert De Niro, and Jesse Thee Plemons.
#metoo 12:39 p.m.
Blizzard Entertainment President Steps Down Amid Company Harassment Lawsuit J. Allen Brack was one of the executives named in California’s lawsuit as being aware of misconduct and not effectively intervening.
killing it 12:20 p.m.
Cooking With Paris Is Anti-Aspirational Food Television Paris Hilton rattles the very foundations of cooking shows.
By Rachel Sugar
making moves 12:00 p.m.
Lincoln Center Appoints Shanta Thake to Lead Its Revival She comes to the institution after over a decade at the Public, and her eclecticism may challenge some of its traditions.
music videos 11:28 a.m.
Bad Bunny and Aventura Marry Reggaeton and Bachata on ‘Volví’ Warm up those hips.
vulture lists 11:05 a.m.
The 30 Best Characters of Tim and Eric’s Awesome Show Universe For your health!
By Luke Winkie and Rebecca Alter
overnights 10:40 a.m.
The Bachelorette Recap: The Look of Love Greg may have said way too much, but Katie said way too little.
love 10:39 a.m.
Diddy Says He’s ‘Coming Back Into Music,’ Wants to Start an R&B Label “We have a chance to — and I’m going to make sure that … we own R&B.”
the goat 9:50 a.m.
Simone Biles Double Pikes Her Way to Bronze Balance beam! Balance beam!
tokyo olympics 2021 9:11 a.m.
A Day-by-Day Schedule of the 2021 Tokyo Olympics Let the games begin …
streamliner 8:00 a.m.
The Case for Speed-watching TV Shows I swear I’m not a monster.
By Nicholas Quah
my single is dropping 12:43 a.m.
The Weeknd Announces New Single, ‘Take My Breath’ Out this Friday!
oof Yesterday at 8:00 p.m.
Matt Damon Says He Still Used ‘the F-Slur’ Up Until Some ‘Months Ago’ “I made a joke, months ago, and got a treatise from my daughter.”
More Stories