In her book Bossypants, Tina Fey refers to the first episode of Cheers as one of the best of all time. Y’see, it’s hard to write a pilot. You’re simultaneously introducing an audience to an entirely set of new characters who are thrust into an unfamiliar situation, while presenting this in an organic, compelling way that engages an audience. And be funny. That’s a tall order. So, when it’s done well, and when the writer also manages to deliver their show’s introduction fully formed at the same time, it really stands out as a quality piece of work. Today, I submit to you, another entry in the Perfect Pilot Hall of Fame that I just invented: Paul Simm’s NewsRadio.

Full disclosure, NewsRadio is one of my favorite TV shows of all time, but unfortunately it never became the break-out hit it should have. It was a network sitcom on NBC in 1995, which at the time was the place for comedy, but it’s unlike anything else of its time. The majority of the characters kind of seem to hate each other but also kind of love each other, the plots range in tone from “off-beat” to “insane,” and the writing is super sharp. In other words, it was doomed. NewsRadio gave some of the first major roles to Stephen Root, Joe Rogan, Maura Tierney, Khandi Alexander, and following success as part of sketch ensembles, the first recurring sitcom appearances of Dave Foley, Andy Dick and, of course, Phil Hartman. This was an ensemble with talent like no other, helmed by Paul Simms, fresh off his stint at The Larry Sanders Show. Put those forces together and you have one amazing pilot.

The surrogate for the audience in NewsRadio is Dave Nelson (not a coincidence: the character was written for Foley), who is starting his first day as news director at WNYX. He confidently strides up to the security desk, signs in, and then waits “35 seconds before heading up so I can arrive at 9 on the dot.” He waits, compliments the guard’s jacket, and steps into the elevator. As the doors close, the guard casually mentions that Dave’s actually heading towards the business offices. The station itself is three blocks left and six blocks over. Dave runs out of the building. A fun joke that perfectly introduces our character. Welcome to NewsRadio.

Jazzy title sequence, and then we are in WNYX, home base for the show. I could describe the layout of the set, but instead I’m going to literally take a page from Paul Simm’s book and show you how he did it in his pilot script from the show. 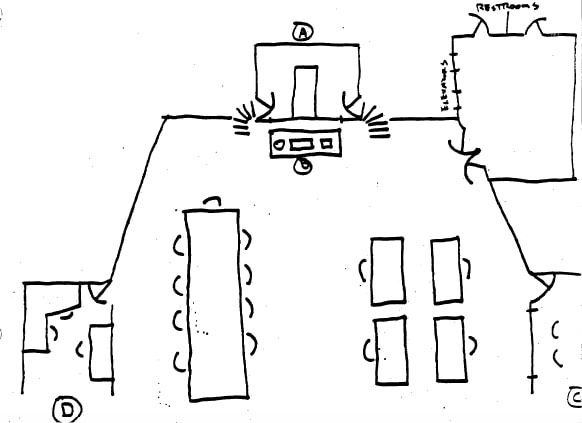 Next we meet Jimmy James, played by Stephen Root, Dave’s boss. Jimmy is the character that probably evolves the most throughout the series. In the first episode he’s a bit no-nonsense, with just a hint of eccentricity, but will eventually become pro-nonsense and very, very eccentric. Jimmy is about to tell Dave what made him more special than any of the other candidates when he receives a phone call. “Yeah, make it quick. I’m in the middle of telling a guy why he’s special to me. No, it’s work related.” Just as the call ends, Ed enters from the elevator. Played by Kurt Fuller from Wayne’s World, Ed is the wrinkle in Dave’s situation, as Jimmy informs Dave that his first duty as news director is to fire Ed, the current news director.

Dave’s attempts at performing this duty are constantly foiled. Ed has to go see his chiropractor because his back is acting up (“Thank God this job gives me full medical coverage…”), forcing Dave to lie and tell his coworkers that he’s the new sports guy. Dave is introduced to Maura Tierney as the lovely, workaholic Lisa Miller, who (spoiler alert) within a few episodes becomes an office romance of Dave’s, immediately killing the potential “will they/won’t they” the network surely would have loved the show to have, and then eventually becomes (spoiler alert) Dave’s ex-girlfriend that he’s still the boss of. Lisa confides to Dave that she is positive that when Jimmy eventually fires Ed, she’s next in line for the position, giving Dave another person he has to be awkward around.

Dave again tries to fire Ed but is interrupted by the pompous blowhard, Bill McNeal, played by Phil Hartman. Bill really wants Ed to reconsider giving Al Gore to Catherine because he needs phone interviews to stay alert and if he’s not alert he might just start reading the news “VERY. SLOWLY. LIKE. THIS.” Dave tells Bill he’ll see what he can do, but when it’s just Ed and Dave on their own, Ed decides that this is the final straw. He’s not going to be pushed around anymore, and so he quits as Dave gleefully looks on and eventually helps him pack his box. Just as Dave is about to take his victory lap and tell Jimmy the good news, the elevator doors open and Ed walks back through, kicking his box in front of Dave for him to carry. (Bad back, y’see.)

Next we meet the nerdy and sensitive Matthew Brock, played by Andy Dick. Ed shoots down Matthew’s new suggestion for the station, so Dave attempts to console him by revealing his secret as Matthew returns to his desk, lifts his glasses up, and presses a tissue against his eyes. 30 seconds later everyone in the office has been told that Dave is the new news director including Rick, the electrician (played by Greg Lee, who is replacing Ray Romano, but will eventually be replaced by Joe Rogan), and Vicki Lewis as the sassy redhead secretary Beth.

Ed comes out of his office and Dave attempts to end this once and for all, but Ed insists that Dave needs to do the sports report. Once Dave goes on the air and does a terrible version of his fake job, Ed is incensed and fires Dave on the spot. The rest of his employees stifle their laughter as Dave offers to give Ed an explanation in his office. A few moments later Dave emerges and immediately Bill starts his attempts to curry favor, but Dave shoots him down immediately (getting a lone “woo!” from the studio audience). “I will not be manipulated, I will not be contradicted, and I will not be intimidated.” Bill compliments Dave’s convictions. And then he continues complimenting Dave until he has to add, “And I will not be sucked-up to, either.” Bill accepts his fate, saying, “Well, you’ve eliminated all my options. All that’s left now is backstabbing!”

Back in Bossypants, Tina describes one of the difficulties of pilot writing as having “to introduce all the characters without it feeling like a series of introductions.” NewsRadio’s pilot is exactly that. A series of characters introduce themselves to Dave and the audience, but the jokes are funny enough, and it’s framed in such an unusual way that it never really feels like that. At your first day of work, you meet a lot of new people one by one too. It makes sense that that’s how it would be for Dave as well.

The show only got better from there, and took some enormous chances, imagining what would happen if WNYX was a turn-of-the-century ocean liner, and then did a Titanic parody on the radio station set, flooding the entire thing with water, or the time everybody falls asleep and has scary dreams, or the time it’s revealed that Jimmy James was actually D.B. Cooper. Sadly, with Phil Hartman’s tragic murder, the show kept on chugging and while still a lot of fun, it never seemed to hit the heights it once soared to. However, despite an insane number of moves around the NBC schedule the addition of cast members (in an entertaining interview with Rolling Stone in April 1997, a fed-up Phil Simms said that NBC “killed the show,” and referred to the current state of their Must See TV lineup as being “like a big double-decker shit sandwich with three good pieces of bread”), the loss of cast members, and any number of struggles that were thrown at this show, it somehow managed to last five seasons. (The show eventually produced 97 episodes, just three short of the magic 100 usually required for a show to be syndicated, which has been referred to as a “very NewsRadio number.”) And yet, the show lives on, whether it is in syndication, on DVD, or in its very special place in the Perfect Pilot Hall of Fame, which again, is a thing I just made up.

Ramsey Ess is a freelance writer for television, podcaster and a guy on Twitter. His webseries “Ramsey Has a Time Machine” just launched a second season featuring Chris Elliott!

+Comments Leave a Comment
Looking Back at ‘NewsRadio’s Perfect Pilot