As the action-movie auteur behind films like Independence Day, The Day After Tomorrow, and White House Down, Roland Emmerich tends to spend his days on set managing explosions and working with tricky special effects. But when Emmerich recently changed gears to make the intimate, low-budget gay-rights drama Stonewall, he found himself faced with a whole new set of problems. “It was a huge challenge to make this movie, and if I had not absolutely wanted it, it would not have happened,” he told Vulture this week.

Emmerich’s new film tells the story of the 1969 Stonewall riots — where a long-oppressed queer community finally fought back against a police raid at New York’s Stonewall Inn — and when it comes out in theaters on September 25 (you can check out the exclusive poster teasing that release date below), it will do so at a pivotal point for gay rights and visibility. On the one hand, this has been a historic year for progress thanks to last month’s gay-marriage decision at the Supreme Court, and queer representation is at an all-time high both in real life and in the arts. At the same time, though, we’re coming up on the tenth anniversary of Brokeback Mountain, and it’s still as difficult as ever to get a gay movie financed, let alone a period piece dealing with a pivotal incident that isn’t taught in most high-school history books. 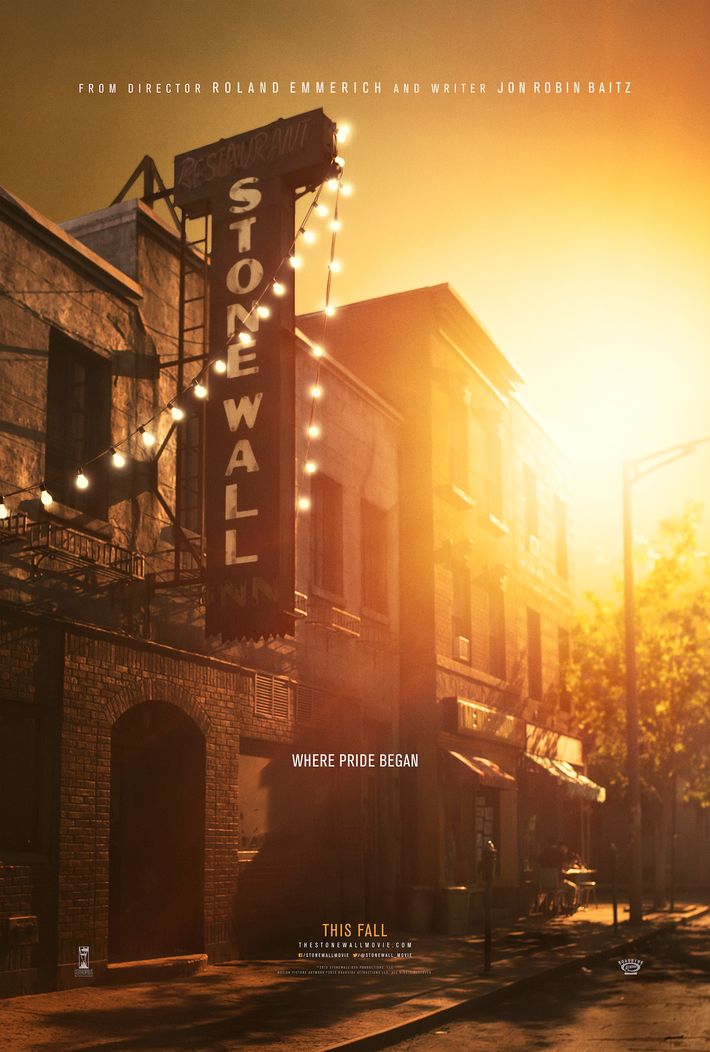 “It was an uphill battle, but we finally did it,” said Emmerich, who was only able to get Stonewall made after he moved production from New York to Montreal — “We wanted to do it in New York on location, and that failed miserably because it was so expensive” — and slashed the budget to a meager fraction of what he typically can command on his bigger films.

The ensemble nature of Stonewall also proved to be a hurdle for Emmerich. “If you can cast a central character with one or two famous actors, you have a good chance to get the movie financed, but in my case, I knew there was not really one central character in the Stonewall riots,” said the director. And while the film has a nominal point-of-view character in Danny (Jeremy Irvine), a young gay man kicked out of his family home who finds refuge with the street kids who congregate at the Stonewall Inn — all of whom face ongoing harassment that finally comes to a head during the riots — Emmerich insists that the diverse crowd that fought back at Stonewall won’t simply be reduced to just one young, blond hunk. “I think we represented it very well,” he said. “We have drag queens, lesbians, we have everything in the film because we wanted to portray a broader image of what ‘gay’ means.”

In fact, Emmerich cast several performers who’d never made a movie before — including Jonny Beauchamp, who’s since appeared on Penny Dreadful as Angelique — in an effort to diversify his cast, which also includes veteran actors like Ron Perlman and Jonathan Rhys-Meyers. But while Emmerich confirms that several of his newcomers are openly gay (like the director himself), he didn’t consider that a requirement to be cast. “I don’t think you should say, ‘He can only play gay because he is gay,’” said Emmerich. “I think Jeremy did an amazing job playing gay, acting gay, and then there were gay actors who also did an amazing job. It was more about who was the best actor for the part, and I always do it like that.”

Now, though, those intimate considerations are mostly put behind him, as Emmerich is in the middle of a grueling shoot for another one of his big action movies, the sequel to Independence Day. I asked him whether a movie like Stonewall provided an opportunity to recharge in between orchestrating bouts of big-budget carnage. “Totally,” he said. “Even talking about it to you now, I’m getting homesick. Right now I’m shooting a big one, and I have to do it in record time.” He laughed ruefully. “It’s an ongoing nightmare.”

overnights 3 mins ago
We Own This City Recap: No Honor Among Thieves These guys cannot turn on each other fast enough.
overnights 9:30 p.m.
Below Deck Sailing Yacht Recap: Sequins and Wigs Gary’s need to flirt continues to cause chaos on the Parsifal III.
work wife 9:05 p.m.
Jason Momoa Apparently Pushed for Amber Heard to Keep Her Aquaman 2 Role According to expert testimony in Johnny Depp’s defamation trial.
overnights 9:00 p.m.
For All Mankind Recap: A Fine Romance Trope For All Mankind gets jam-packed with tropes from romance novels. Who knows if it was intentional, but it works.
extremely online 6:26 p.m.
Halsey Goes Viral in an Attempt to Avoid Going ‘Fake’ Viral on TikTok Claiming their label won’t let them release a new song yet.
exes 5:46 p.m.
Kate Moss Will Testify Wednesday in Johnny Depp’s Trial Depp’s team is also planning on calling him back to the stand later this week as a rebuttal witness.
the law 5:19 p.m.
Gunna Denied Bond for Gang Charge, Trial Set for January The rapper’s attorneys denied he would be a risk for witness intimidation.
endings 3:00 p.m.
The Empty Symbolism of Men’s Ending Alex Garland’s Men is laden with symbolism, much of it provocative and highly gendered. But what does it all add up to?
By Katie Rife
manchester's finest 2:13 p.m.
Liam Gallagher Hops Aboard His Own ‘Magic Bus’ His maraca-infused track, “World’s in Need,” was inspired by the Who.
cannes 2022 1:01 p.m.
The ‘Eat the Rich’ Comedy Making Cannes Say ‘Blech!’ In Triangle of Sadness, Ruben Östlund rubs audiences’ noses in shit. They love him for it.
By Nate Jones
decisions decisions 12:15 p.m.
Everything to Consider When Making a Comedy Special Special Aside from what jokes to tell.
By Kathryn VanArendonk
vulture 10x10 12:00 p.m.
The Hazza Puzzle 33-Across, Five Letters: Hitchcock role in a Hitchcock film, e.g.
beginning times fun 12:00 p.m.
The Special Special Stand-up isn’t just getting prettier onscreen. It’s growing up as a distinct art form.
By Jesse David Fox
vulture lists 12:00 p.m.
Every Lady Gaga Song, Ranked Here’s where Love For Sale and “Holy My Hand” land on the all-time list.
By R.S. He
vulture lists 11:00 a.m.
The Cast of Downton Abbey’s Most Un-Downton TV and Movie Roles Michelle Dockery as a prosecutor, Lily James as Pamela Anderson, and much more.
brilliant! 11:00 a.m.
Peaky Streamers: A Guide to the Best Services for British Movies and TV Acorn, BritBox, and plenty of other places for Anglophiles to get their fill.
trailer mix 10:36 a.m.
Freak Out! Over New Bowie Footage in Moonage Daydream The first estate-approved David Bowie film featuring his music.
vulture picks 10:30 a.m.
26 Notable New Releases Over the Next Two Weeks Slow Burn returns, Stranger Things season four, Bon Iver at Forest Hills, and more.
trailer mix 10:22 a.m.
Mission: Impossible 7 Trailer — Tom Cruise Yelled at His Crew for This? The mission? Impossible. The reckoning? Dead. The part? One.
overnights 10:22 a.m.
90 Day Fiancé Recap: Everyone Is a Kid Again Have you ever seen so many couples become petty and immature so quickly?
More Stories