As fans of Mad Men have no doubt realized since the show’s May finale, Elisabeth Moss withdrawal is a real and very painful thing. Fans of this terrific actress may have perked up this week when news broke that she’s onboard for a second season of Top of the Lake, but that’s going to take forever to come to fruition. Isn’t there anything around the corner that can give us a fix?

How about a feast instead? You’ve only got a month to go until Moss can knock you out with her acclaimed performance in Queen of Earth, directed by Alex Ross Perry. In it, Moss plays Catherine, a woman who’s coming unglued after a breakup, and while she’s meant to recuperate with her best friend (Katherine Waterston) during a weeklong stay at a lake house, it’s going to get a whole lot worse before it can get any better. That’s bad news for Catherine, but great news for a performer like Moss, who throws herself into character to deliver a performance that’s been praised as “utterly fearless” and “gloriously unhinged.”

It helps that Queen of Earth marks Moss’s second film with director Alex Ross Perry, who’d directed her to great acclaim in Listen Up Philip and was determined to push her even further this time around. “I don’t know how easily I could just meet an actress and say, ‘Hey, this is how far I need you to go,’” Perry told Vulture this week. Fortunately, Moss and her director already had a strong collaborative bond, and she even came aboard to produce Queen of Earth. “We all trust one another, and it’s a safe space with no embarrassment,” he said. “You know, when she’s crawling around on her hands and knees in her nightgown, with tears streaming down her face and her makeup is running, then everyone else feels like they can basically go as far as they want and not feel ashamed.”

In addition to reteaming with Moss, the movie reps another continuation of Perry’s work with an important collaborator: artist Anna Bak-Kvapil, who painted the striking poster for Queen of Earth, which you can see below. 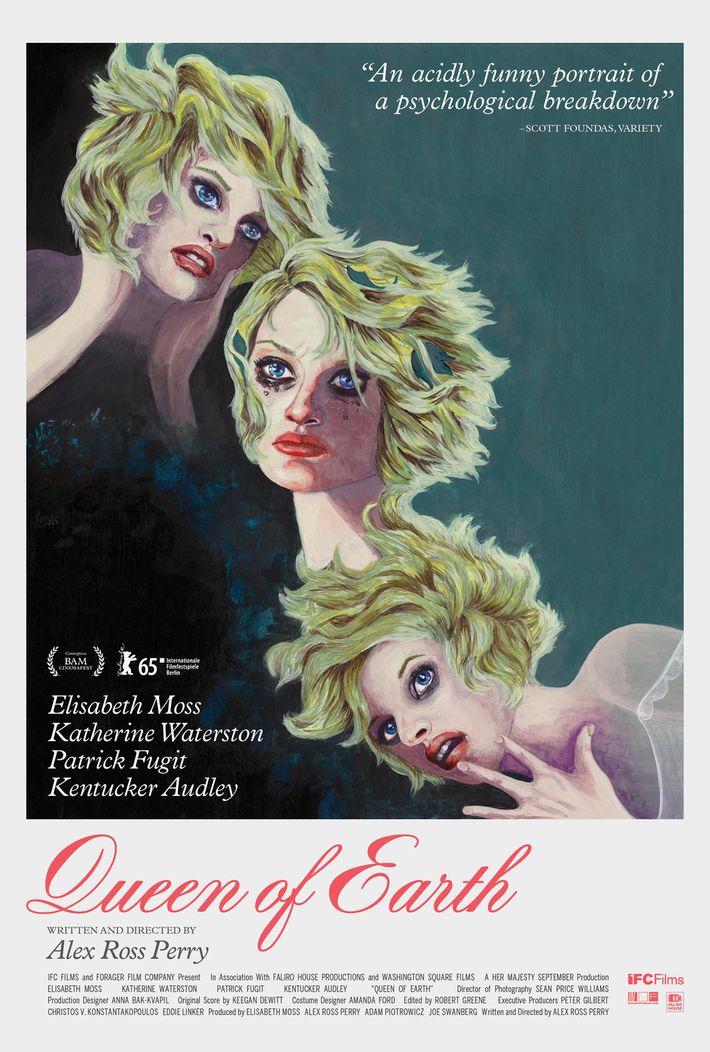 Bak-Kvapil also illustrated the terrific Listen Up Philip poster, and her continued involvement with Perry’s work was paramount to the director. “You really never know how a company is going to decide to position your movie,” he told us, “and I said, ‘Just for my own mental health, I’m really not going to spend the next six months of my life fighting with a distributor about every small decision, so if they don’t want to embrace the kind of aesthetic that we’ve done before, I’m not going to make these phone calls that I’ve done in the past where I’m begging people to see it my way.’” Fortunately, IFC Films backed Perry and Bak-Kvapil’s vision. “They’re really allowing the material — the poster and the trailer — to lean in 100 percent to the kind of ‘70s aesthetic that the film really relishes.”

Bak-Kvapil and Perry, who are engaged, have been working together since his 2009 debut Impolex, for which she designed some tarot cards. “Like a lot of people’s first movies, it kind of was an all-hands-on-deck affair where you’re taking advantage of the skills that everyone you know has to offer,” says Perry, who has sought to involve Bak-Kvapil in his projects ever since. “I’m hoping that this exposes her work to more people who are interested in having a classy, unique element of design for their films or albums or books.”

overnights 21 mins ago
P-Valley Season-Finale Recap: Sink or Swim After another whirlwind of a season, P-Valley leaves us on the edges of our seats.
anne heche 23 mins ago
Anne Heche Has Been Taken Off Life Support She was found a viable candidate for organ donation.
what we know 10:50 p.m.
Salman Rushdie Is on the ‘Road to Recovery’ Following Gruesome Attack The acclaimed author was grievously wounded and remains hospitalized but was taken off a ventilator and again able to speak on Saturday.
overnights 10:08 p.m.
Tales of the Walking Dead Series-Premiere Recap It’s a zom-rom-com meet-cute for the ages!
overnights 10:05 p.m.
Power Book III: Raising Kanan Season-Premiere Recap: Family Matters Kanan questions whether he’s cut out for this life.
lingering questions 10:00 p.m.
Who Actually Died in That Westworld Finale? Are we being tricked? Possibly.
overnights 10:00 p.m.
Westworld Season-Finale Recap: Valley Girl It turns out that the world was never going to be saved.
overnights 9:00 p.m.
The Real Housewives of Atlanta Recap: She’s a Runner, She’s a Track Star Since becoming a full-time housewife, Marlo has gone from chronically messy to totally intolerable.
awards chatter 8:49 p.m.
Janelle James Won ‘Most Shocked’ at 2022 HCAs But also a big night for Better Caul Saul!
books 6:55 p.m.
Salman Rushdie Talking, Joking After Stabbing He may still lose an eye, however.
tributes 5:44 p.m.
Watch the Chicks Cover Olivia Newton-John’s ‘Hopelessly Devoted to You’ Natalie Maines called the late star “a worldwide sweetheart.”
no feet pics pls 4:33 p.m.
Ringo Starr Promotes Get Back Blu-Ray With New Footage Peace and love.
overnights 3:11 p.m.
Evil Season-Finale Recap: Meet the Parents It’s a small miracle Kristen doesn’t barf at the end of this bonkers finale.
overnights 10:00 a.m.
A League of Their Own Recap: Friends of Dorothy For just a few hours, Rockford, Illinois, turned into a Technicolor Oz.
anne heche 2:12 a.m.
Police No Longer Investigating Anne Heche Car Crash “When a person suspected of a crime expires, we do not present for filing consideration.”
team stancy 1:13 a.m.
Stranger Things Fan Megan Thee Stallion Declares Herself ‘Team Stancy’ “Y’all keep throwing the kids on him to babysit. He keeps saving y’all life. All he do is save y’all life.”
the law Yesterday at 10:53 p.m.
FBI Says Rust Gun Could Not Fire Without Trigger Pull Contradicting Alec Baldwin’s prior claims.
overnights Yesterday at 6:00 p.m.
Never Have I Ever Season-Finale Recap: Should I Stay or Should I Go We’re finally here — the last day of Devi’s junior year.
rip Yesterday at 5:05 p.m.
Comedian and Actor Teddy Ray Dead at 32 He wrote and starred in many viral comedy sketches for All Def Comedy.
overnights Yesterday at 3:32 p.m.
RuPaul’s Drag Race Down Under Recap: Best of a Bad Brunch It becomes clear that Molly truly is the sabo bitch of the season. She’s even managed to sabo herself.
More Stories