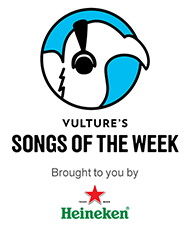 Every week, members of the Vulture staff highlight the best new music of 2015. If the song is worthy of your ears and attention, you will find it here. Read our picks below, share yours in the comments, and subscribe to the Vulture 2015 Playlist for a comprehensive guide to the year’s best music.

Chvrches, “Leave a Trace”
The anticipation for a new Chvrches record is incredibly high, even though it’s only been two years since their beloved debut, The Bones of What You Believe. Part of this comes from a steadily building fan base, as more and more people hear about the band. But, at least for me, a lot it is my desire to see just how big they can get. The Scottish trio are ready for prime time, with songs packed with sing-along choruses and instrumentation that feels both nostalgic and current. They are one Taylor Swift friendship away from being superstars. With their sophomore album, Every Open Eye, due out in September, get ready to see a lot of Chvrches. I know I’m ready. —Jesse David Fox (@JesseDavidFox)

Foals, “Mountain at My Gates”
Not going to lie, though I like it, this song kind of sounds like something that would play in the background of a network promo advertising all the new shows coming this fall. It is the price of doing business as a poppy, bouncy, just a little frantic English band. The good news is that by the end, the song opens up a bit for a freak-out breakdown that just begs to be played live. —JDF

Alice Glass, “Stillbirth”
It has been almost a year since Crystal Castles broke up. And intermittently since there has been a debate — one mostly propagated by the group’s producer, Ethan Kath — over who deserves the lion’s share of the credit for Crystal Castles’ distinct sound. Eventually the group’s singer, Alice Glass, defended herself and put the conversation to bed. With her first single since the band’s breakup, she further makes the case for herself as the band’s driving force. The forceful, dynamic “Stillbirth” seamlessly blends both the harshness and beauty Glass was able to achieve with Crystal Castles. —JDF

Calvin Harris feat. Disciples, “How Deep Is Your Life”
Mr. Swift has finally entered his deep-house phase — with a slight hint of Daft Punk — and somewhere, Disclosure are seething. —Dee Lockett (@Dee_Lockett)

Jason Isbell, “Speed Trap Town”
If I could recommend one album to listen to this month, it’d have to be Jason Isbell’s Something More Than Free. People will try to pigeonhole his music as some cross between folk and country (Americana, if you will) that sits just barely outside the parameters of whatever we’re calling indie rock these days. Nothing he writes is as hokey as those loose definitions make it seem, though. There’s a deep sincerity in the stories he spins, even if they’re not his. (He mostly writes from the perspective of characters on this album.) I’m not from a speed-trap town, but that’s the beauty of his Springsteen-esque artistry: You don’t have to be for his words to still hit home. —DL

Kurt Vile, “Pretty Pimpin”
Take a moment out of your busy day to watch Philadelphia’s Kurt Vile clone himself and drink green juice inside of a discount clothing store. His new album, b’lieve i’m goin down …, his sixth, is out September on Matador. —Lauretta Charlton (@LaurettaLand)

Ashley Monroe, “If Love Was Fair”
For years Ashley Monroe has built a reputation as one of country music’s most underrated songwriters. Hooks like these don’t come to just anyone: “It was the mines that killed my daddy / It was the law that killed my man / It was the Bible belt that whipped me / When I broke the Fifth Command,” she sings on “Dixie,” the standout track from her new album The Blade. For “If Love Was Fair,” she borrows a popular Bible verse as her way of flipping God the bird when she feels burned by all of love’s disappointments. Something tells me her BFF/bandmate Miranda Lambert’s about to spend a lot of time with this resilient album in the coming months. —DL

Run the Jewels, “Meowrly”
I’m always looking for the latest feline-friendly tracks to vibe to with my cat, Purrrrfessor, so you could imagine my delight when I discovered that Run the Jewels — the NYC-based hip-hop duo consisting of El-P and Killer Mike — decided to produce a Kickstarter-backed, strictly cat-centric reworking of their second album Run the Jewels 2, appropriately titled Meow the Jewels. The first released track from the album, “Meowrly,” (a new take on their track “Early”), produced by A-list producer BOOTS (Puss in …?) is a glorified head-banger that features crescendo-ing kitten noises that may or may not have been provided by Lil Bub. Cat lovers rejoice, yo. —Devon Ivie (@devonsaysrelax)

YG, “Twist Ma Fingaz”
YG had the second-best rap album of 2014 and still didn’t score a Grammy nomination earlier this year. But the snub doesn’t appear to have fazed YG, as he’s set to release its sequel, Still Krazy, with even more statement production from West Coast’s new elite. Instead of his trusted partner DJ Mustard, his new single was produced by Kendrick Lamar fave Terrace Martin, and it captures that same vintage Compton G-Funk soul as Kendrick’s “King Kunta” — with a slicker gangsta lean. YG nearly got gunned down last month, but you wouldn’t know it by the carefree bravado he stunts with on this track. —DL

Do you like good music? Of course you do! Subscribe to Vulture’s 2015 Playlist to hear the new music we’re listening to every week.