It’s 10:47 p.m., 11 hours before the campers show up, and the gang’s all here, gathered around the campfire, jamming to “Jane” by Jefferson Starship. You might recognize this title sequence from Wet Hot American Summer: The Film, with the same general revelry, same title font, and same cut to the Guitar Guy as soon as the solo starts. Everyone’s having fun. 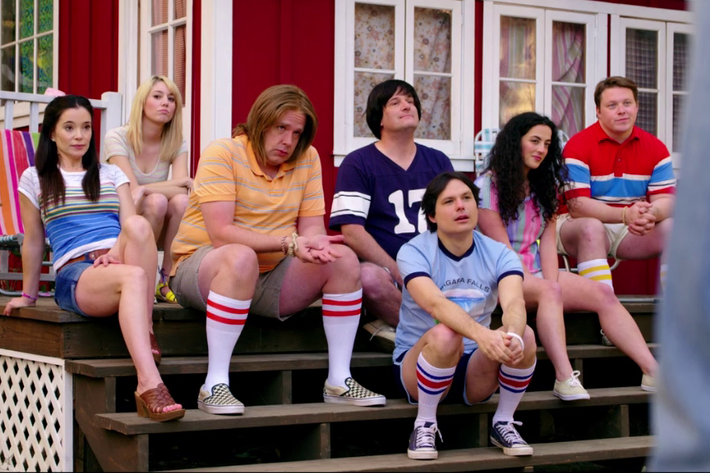 Victor (“Victooooor!!!”) and Neil, those lovable goofballs, are here. They’re just messing around, Victor’s trying to put his ding-dong in Neil’s ear, etc.

Victor announces a party after lights out, but that puts Katie (Marguerite Morreau) in a pickle. She’s supposed to go to the formal at Camp Tigerclaw with her boyfriend, Blake. 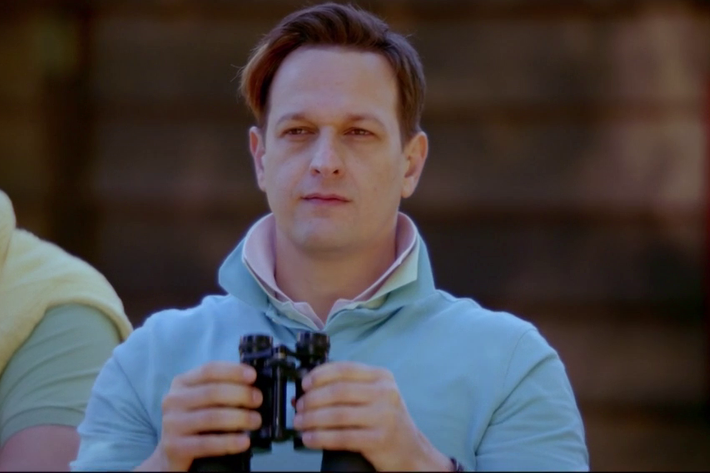 He does not take kindly to people badmouthing his girlfriend.

The campers are here! Even our favorite radio D.J. Artie, aka the Beekeeper. He looks different, even more different than the rest of the cast. Not quite sure why. Botox?

Anyway, it turns out that Andy has the hots for Katie. He wants to send her a message: “To Katie, from Andy. Re: Me being your boyfriend: Hunker down for doinkage.” Andy might seem like a jerk on the outside but it turns out that he’s quite the poet.

Across the field, Coop (Michael Showalter) makes friends with camper Kevin, and Kevin in turn develops a crush on camper Amy. But they’re not the only summer romance in the air. It turns out that Mitch and Beth have also hunkered down for major doinkage, so to speak.

At 8:34 a.m., some of the campers head to the auditorium for theater stuff.

The theater program is run by Susie (Amy Poehler) and Ben (Bradley Cooper), who are very much a couple. They are definitely dating and definitely love each other. Exhibit A:

These two theater geniuses are putting on a production of Electro City, “the story of a young man who moves from the country to the city to become a Broadway star, and is immediately sent to the electric chair for a crime he did not commit … or did he?” But in order to pull this production off, they’re gonna need some help from professional actor Claude Dumet (John Slattery).

Over at camp check-in, Neil (virgin) and Victor (definite sex-haver) make a bet: Who loses their virginity first… or gets laid for the millionth time? Victor plays it very cool. He’s definitely had sex before. He sounds like a guy who has had sex before.

In the boys’ cabin, Kevin seems to be having some trouble making friends. The main bully running the show is Drew, who is amazing. Drew is absolutely the worst, and I love him so much. Here are some great Drew quotes:

Kevin runs away and Coop has to chase him down.

Finally, Coop catches up and convinces Kevin to challenge Drew to a burping contest. The contest does not go well, because as Drew likes to say: “I’m the fuckin’ burp king of Westchester.”

Drew is the worst, and like I said before, I love him.

Andy, meanwhile, continues to try to impress Katie, much to Blake’s dismay.

Over at the office, Mitch is in trouble and having money problems. He’s done something bad but he won’t tell Greg what it is.

He nervously eats a can of vegetables…

In the nearby woods, a company named Xenstar is dumping toxic waste.

What’s gonna happen to the camp???

Will Camp Firewood survive until the last day of the session? (Yes.)

+Comments Leave a Comment
WHAS: FDOC Recap: Nobody Looks a Day Over 40