Jackson Oz, an American expat safari guide living in Africa, discovers a link between strange animal attacks on people occurring around the world and his late father’s controversial theories about an impending threat to the human race. Photo: Steve Dietl/CBS

CBS’s new summer drama Zoo combines the thrills of baffling animal attacks with the chills of awful, clunky dialogue. The animals of the world appear to be rebelling, starting with the lions (and some California housecats, which is not a euphemism), perhaps because they can hear what the people are saying and think, No, truly anyone would rather be dead than speak this way. This is a mercy killing. Rawwrrrr. Here is a brief overview of some of the clunkiest, hokiest, phoniest lines from Tuesday night’s premiere.

“How does one get eaten to death?” So asks Distressed French Woman (Nora Arnezeder) of our Noble White Hunk (James Wolk) in Botswana. He doesn’t know, nor does he seize a really golden opportunity to quote Ernest Hemingway and say, “gradually, then suddenly.” Oh, well.

The dialogue Stateside is not better. “Come on, Jamie, don’t take us for fools,” says Jerk Editor (Reid Scott), who appears to be around 30 and a native English speaker without any meaningful affectations. It’s not that this phrasing is incorrect, it just does not sound anything like what someone might actually say. Later, Intrepid Reporter Jamie (Kristen Connolly) spits it back at him, though she does not fare much better in the “sounds like a normal human” department:

Jamie: … you can let yourself out. I’ve got unicorns to chase.

One can imagine some of this phrasing maybe working on Scandal or The West Wing or Veep — shows where stylized banter is the point, and that style is specific and honed. Not so here on Zoo, where we’re also stuck with clunkers like “Free will is what separates us from the animals! Free will and this truck.” Delivered by Indiana Jones, with charm and a wink? Maybe. Here, it’s meant to feel significant, which it does not.

No one is safe from the curse of bad dialogue. Curious Scientist (Billy Burke) describes himself thusly: “I specialize in diagnosing animal disease through the examination of their tissue … bodily fluids … [holds up specimen jar] other stuff.” It’s clear he and Jamie are going to fall for each other, and that budding chemistry is exemplified in exchanges like, “Oh, you’re one of those.” “One of what?” “One of those scientists who prefers animals to humans.”

Zoo is about animals revolting against humans — at least it seems to be? — and it’s a CBS summer drama based on a James Patterson novel, so I’m not expecting lines to be just short of Shakespeare. Still, forcing actors to deliver lines such as, “As you have said, ‘All men are unknowable, but with animals, you know where you stand’” feels cruel. Those lions are on to something.

There is one good part of Zoo, though, and that is its tree of cats: 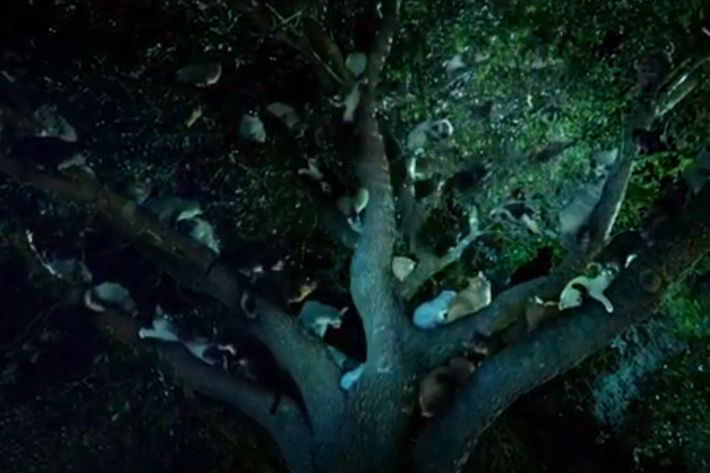 This is supposed to seem ominous and eerie, but it actually seems dope and charming! It’s a tree full of cats! Someone turn this into a follow-up to Neko Atsume.

+Comments Leave a Comment
How Bad Is the Dialogue on Zoo? Bad.

life in plastic 9 mins ago
Ryan Gosling Will Play the Ken to Margot Robbie’s Barbie In the Greta Gerwig movie about the Mattel doll.
obituary 6:32 p.m.
Remembering the ‘Tireless’ Halyna Hutchins, a Rising Cinematography Star Friends and colleagues recall the cinematographer’s work ethic and artistic eye: “There is no excuse I can accept for this loss.”
By Chris Lee
overnights 6:27 p.m.
Canada’s Drag Race Recap: Cirque du So Gay Send in the clowns.
follow friday 6:09 p.m.
Grace Freud Is One of Only 10 Gay People Left on Earth We caught up with the comedian on Instagram Live.
explainers 5:30 p.m.
Everything We Do and Don’t Know About the Fatal Rust Set Shooting The camera crew had reportedly walked off the set to protest work conditions earlier that day.
lowkey reminder 5:27 p.m.
Are the Characters of Insecure Okay?! Going Into Season 5? A brief rundown of who’s killing it and who’s on the verge of a breakdown as the HBO series heads into its final season.
overnights 4:27 p.m.
I Know What You Did Last Summer Recap: You Got Nothing to Hide Everyone finally recognizes Clara for the obvious murder suspect she is.
tv review 4:17 p.m.
Insecure Remains Magical and Messy in Its Final Season The series draws to a close with a characteristically effervescent yet uneven exploration of the dynamics of 30-something life.
now streaming 4:00 p.m.
What’s Leaving Netflix: November 2021 Glee, School of Rock, Waterworld, and more.
dunes 4:00 p.m.
How to Watch Dune, the Year’s Sandiest Movie The sci-fi epic hit HBO Max a day early.
dyune 3:59 p.m.
A Brief Ode to Sand, a Powerful Cinematic Supervillain Forget the lusty sea, it’s time to recognize sand, and then run away from her, screaming.
crime 3:56 p.m.
Robert Durst Charged With the Murder of His Wife After 39 Years Days after being convicted of killing a friend for what she knew.
stand-up 3:23 p.m.
The Stand-up Set Cycle, From Notebook to TV Special Ricky Velez, Ronny Chieng, and Gary Gulman on how they develop new hours after leaving the old ones behind.
overnights 3:00 p.m.
Invasion Recap: In the Stars Invasion’s forward progress hits a wall in an uneven transitional episode.
this week in late night 2:50 p.m.
John Oliver’s Kitchen-Sink Car Commercial Won Late Night This Week Plus, The Late Late Show’s keyboard noises and Jon Stewart on Hitler jokes.
tv review 2:42 p.m.
Invasion Made Me Root for the Aliens In the Apple TV+ series, characters across the globe bumble around in their own misery, resentful that aliens keep interrupting their tragic lives.
no time to release a movie 2:16 p.m.
The Huge Hidden Cost of Holding a Movie According to experts across the industry, the financial disarray of COVID-era Hollywood goes much deeper than bankrupt movie-theater chains.
By Chris Lee
vulture lists 2:00 p.m.
8 Great Audiobooks to Listen to This Month Katie Couric, Sutton Foster, Stanley Tucci, and more.
overnights 1:32 p.m.
Grey’s Anatomy Recap: The Webber Method Looks like things got dark for Addison during the pandemic.
tiff 2021 1:30 p.m.
Dune, Reviewed by Someone Who Popped an Edible Beforehand SPACESHIP GO WHIRRRR, CANNON GO BOOOOM, ORCHESTRA GO BRRRRAAWWRRRRRR.
By Nate Jones
More Stories