Star Wars, a franchise about a group of mystic wizards that travel around the galaxy making friends with robots and teddy bears, is coming back in December, and now Entertainment Weekly has some very silly photos from the film’s set. This is not a bad thing; one common interpretation of where George Lucas went wrong with the prequel trilogy is that he made those films silly in precisely the wrong way. If these new photos are any indication, The Force Awakens seems to have restored the series’ silliness meter precisely where it needs to be — let’s take a look!

We also learn a bit more about the etymology of Kylo’s name. As it turns out, that’s not the name he was born with. Just like “Darth Vader” (his hero), “Kylo Ren” is a title he assumed later; the “Ren” part comes from the Knights of Ren, a mysterious group he’s affiliated with. Silliness Rating: Slightly Silly.

There’s also a place to be serious, and that place is by the scarred wreckage of a burnt-out TIE Fighter. Silliness Rating: Not Silly at All. (Spacecraft crashes are no laughing matter.)

We’ll close with the silliest shot of all, in which Daisy Ridley’s character and the adorable BB-8 encounter some very grumpy aliens. This shot is so silly in such a specifically Star Wars way, as if a million voices suddenly chuckled at once and then were suddenly grinning. Silliness Rating: Intergalactically Silly. 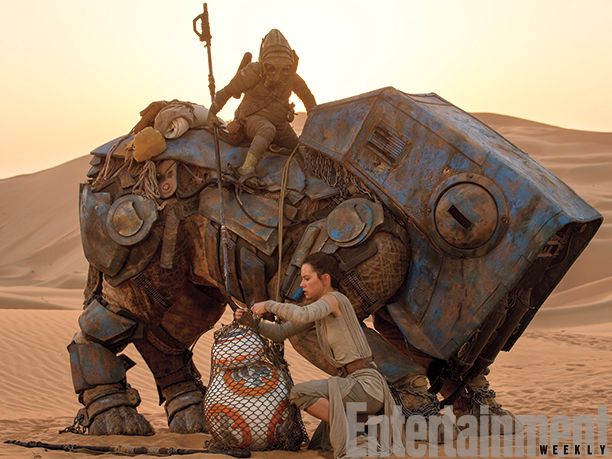