“This isn’t a spaceship,” says Don Draper of a Kodak slide projector at the end of Mad Men’s first season. “It’s a time machine.” Similarly, the image you see below isn’t an advertisement for Matt Zoller Seitz’s new book Mad Men Carousel: The Complete Critical Companion; it’s actually the cover of the book itself. A thing like that! 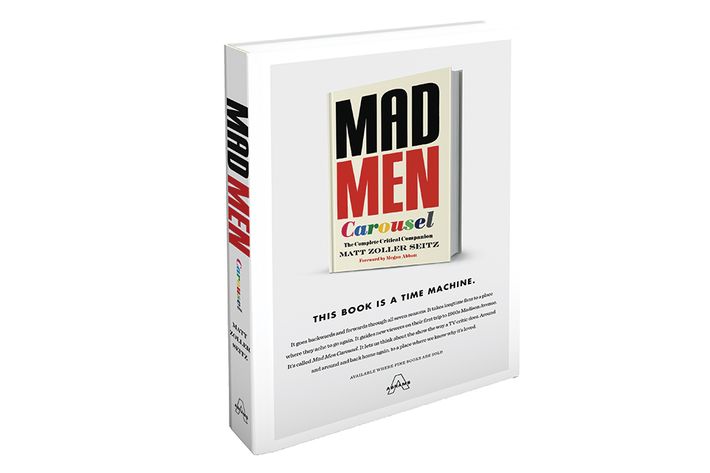 Mad Men spun inventive storytelling, rich characterization, and symbol-laden gamesmanship into an entrancing puzzle. Its drama follows the life of Donald Draper, a brilliant but deeply damaged Madison Avenue adman. Its story spans March 1960 through November 1970, refracting the lives of Don’s home and work families, as well as American history, through his broken soul.

What did it all mean?

Mad Men Carousel will keep viewers company as they try to answer that question for themselves. This book collects all of bestselling author Matt Zoller Seitz’s celebrated Mad Men writing for the first time, including never-before-published essays on the show’s first three seasons. Seitz’s work digs deep into the show’s themes, performances, and filmmaking, examining complex and sometimes confounding aspects of the show. All seven seasons and ninety-two episodes are covered.

Each episode review also includes brief explanations of locations, events, consumer products, and scientific advancements that are important to the characters, such as P.J. Clarke’s restaurant and the old Penn Station; the inventions of the birth control pill, the Xerox machine, and the Apollo landing module; the release of the Beatles’ Revolver and the Beach Boys’ Pet Sounds; and all the wars, protests, assassinations, and murders that cast a bloody pall over a chaotic decade.

Mad Men Carousel is named after an iconic moment from the show’s first-season finale, “The Wheel,” wherein Don delivers an unforgettable pitch for a new slide projector that’s centered on the idea of nostalgia: “the pain from an old wound.” This book will sooth the most ardent Mad Men fan’s nostalgia for the show. New fans, who will want to binge-watch their way through one of the most popular TV shows in recent memory, will find an episode-by-episode guide to accompany their viewing experience. Longtime fans of Mad Men or of Seitz’s writing will discover an engaging, thoughtful, and entertaining companion to one of the most multilayered and mercurial TV shows of all time.

midnights era 3 mins ago
Wait, Is Taylor Swift Just Giving Us Straight Answers? Not like the videogame. Or maybe exactly like the video game?!
surprise surprise 15 mins ago
Ye Thought Wearing a White Lives Matter Shirt Would Be ‘Funny’ He addressed his Paris Fashion Week controversy in an interview with Tucker Carlson.
overnights Yesterday at 10:41 p.m.
Atlanta Recap: Mr. Chocolate and the Black Movie Factory What Van believes will be a quick adventure in a Tyler Perry–esque production turns into a pivotal moment for her as a mother.
theater review Yesterday at 10:00 p.m.
The Revived and Reinvented 1776 Is a Delight, If You Can Stand to Watch It If you’re going to stage this show despite all its problems, this is how to do it.
health Yesterday at 9:32 p.m.
Justin Bieber’s World Tour Is Officially Postponed Until the Spring He previously paused the tour due to facial paralysis caused by Ramsay Hunt syndrome.
overnights Yesterday at 9:01 p.m.
Ghosts Recap: Alberta’s Turn The female-empowerment vibes are at an all-time high over at the Woodstone B&B.
trailer mix Yesterday at 8:02 p.m.
RHOBH Reunion Trailer: It’s Kathy Hilton vs. Lisa Rinna “You are the biggest bully in Hollywood, and everyone knows it.”
under oath Yesterday at 6:46 p.m.
Kevin Spacey’s Sex-Abuse Trial Is Already a Mess Spacey, wearing a slate suit, snow-white shirt, and powder-blue tie, did not appear worried.
jinkies Yesterday at 6:02 p.m.
Mindy Kaling and Constance Wu Are Solving the Mystery of Velma The first teaser for HBO Max’s Scooby-Doo spinoff dropped at New York Comic Con 2022.
good one podcast Yesterday at 5:05 p.m.
How Sam Morril Gets Laughs Between Laughs “It’s almost like a hesi move in basketball. Like, how can I get my jump shot wide open?”
By Jesse David Fox
coming soon Yesterday at 4:53 p.m.
It’s a-Here, Mario! Chris Pratt, look how you massacred our boy.
chat room Yesterday at 4:52 p.m.
John Macmillan Shot Laenor’s House of the Dragon Escape on His First Day on Set “It was a really stormy day, and we were out in the ocean in this massive hundred-year-old boat.”
future trash Yesterday at 4:27 p.m.
John Waters, Pope of Filth, to Direct Adaptation of His Book Liarmouth “Maybe it’s fitting that my novel was shocking enough to jump-start the engine of my film career.”
overnights Yesterday at 4:24 p.m.
She-Hulk: Attorney at Law Recap: Murdock & Walters Charlie Cox’s Daredevil returns to the MCU — and begins flirting immediately.
best of 2022 Yesterday at 4:00 p.m.
The Best Video Games of 2022 (So Far) It’s been a really, really, really full year.
coming soon Yesterday at 3:45 p.m.
Glass Onion: A Knives Out Mystery Headed to Theaters After All But only for a week.
highway to hell Yesterday at 3:01 p.m.
The Live-Music Industry Is Broken Supply-chain issues, mental health crises, positive COVID tests. As artists continue to struggle, is any of this even worth it?
vulture guides Yesterday at 3:00 p.m.
A Grey’s Anatomy Catch-Up Guide, No Matter How Far Behind You Are Everything you need to know before jumping back in.
By Maggie Fremont
movie review Yesterday at 2:50 p.m.
Tár Brilliantly Undoes an Ego Monster of an Artist Cate Blanchett is toweringly great as a famous conductor who meets a very public downfall.
buffering Yesterday at 2:26 p.m.
It’s Time to Start Worrying About Peacock Can the streaming service come back from the dead?
More Stories