First of all, if you think I watch Bachelor in Paradise, you’re nuts, so this week’s UnREAL finale came at the perfect time — ending almost alongside its inspiration — exactly one week after, as perhaps an attempt at upping last week’s insane finale. Between then and now, we even heard what host Chris Harrison had to say about the Lifetime homage, and it went something along the lines of, I am super-jealous that it’s good and smart, and my show is neither of those things. Just kidding! He didn’t say that, but I just spelled out the subtext in case you happened to miss it.

Speaking of subtext, one of Quinn’s first lines to Adam this episode unknowingly predicts what is about to unfold. They banter about what went down the night before (you know, just Adam rejecting Rachel after she leaves Jeremy’s bed to run away with him on that private jet of his), and she assures him: “That’s why I’m here. To protect Rachel from herself.” That’s some honesty, I think, despite this show’s attempts at spinning you around so quickly with reveals that you aren’t quite sure who is trying to do what. 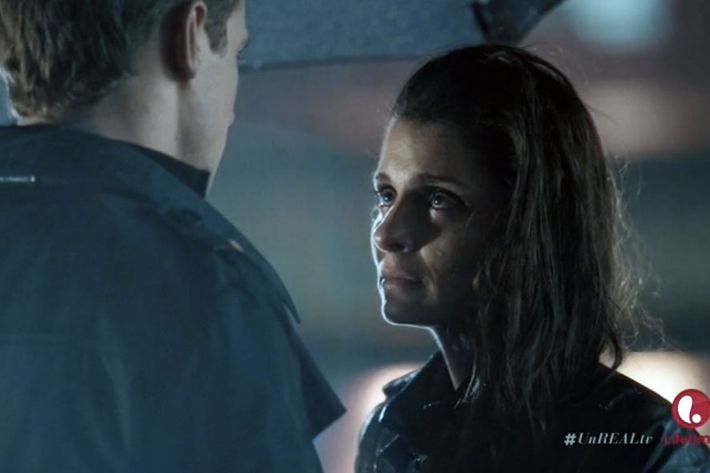 She had just left her own version of the Carrie Bradshaw Post-it Note on the pillow next to Jeremy  — ”I don’t deserve you!” — but a note so manipulatively vague in its brevity, it could be read a few different ways. But as Perfume Genius plays, it’s clear Quinn got to Adam with some sort of deal-breaker information that we discover later: She tells him about last season’s breakdown, that Rachel checked into a hospital. Rachel denies the second part, but the first is totally true: Quinn knows Rachel is unstable. Sure, she’s warning Adam for her own selfish reasons, but in retrospect, she also knows this fling is a horrendous idea for both of them. “This thing we have? It’s heroin,” Adam tells her. Is it a line fed by our “concerned” executive producer? Possibly. Either way, it certainly feels true.

And it’s unbelievably hard not to watch this finale without imagining theories for season two. It puts you in Quinn’s mind-set, and who’s planting the seeds for her next season. And just like us, she needs Adam and Rachel. She doesn’t need Chet, but thanks to our new field producer, Madison, and future featured cast member, Dr. Wagerstein, he goes straight to Brad and makes sure the deal Quinn had with him behind his back isn’t going to happen. “You know who I am,” Chet says to Quinn, excusing his cheating. Quinn answers: “She was me 15 years ago. So now I’m the wifey and you need a new side piece.” It’s the Circle of Trash, and she’s out of the game. 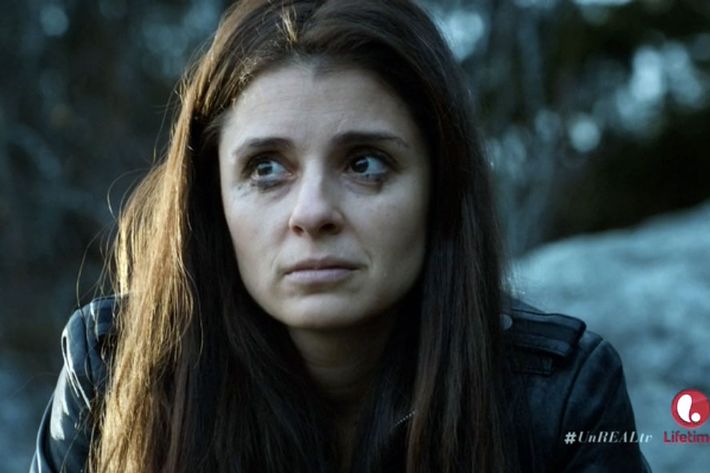 … Despite the eye makeup, Rachel’s back to unreadable. It’s safer that way. She’s also going to produce the big wedding finale. Quinn’s basically like, Whatever, as long as we take down Chet. Rachel’s fine with that, and if these two can’t craft this guy’s downfall together, they’re not cut out for this business.

When she enters from stage LOL, we assume the return of Brittany is Rachel’s finale showstopper — but it’s not. Chet brought her back to act insane and say wonderfully catchy, bitchy things. If you’re a Bachelor/ette watcher, you’ll recall this also being quite accurate in the canon — runner-up creep Nick from this season was a returning “character.” Bringing someone back for a second chance at love is a good way to rile up the remaining hopefuls.

Not that it bothers Grace at all. She promises Adam exactly what he wants to hear: He’ll get laid and get out after next season. She says something about being a “hot-blooded Latina temptress” — words that no human would ever actually say — and you wonder if she’s been fed a line or if UnREAL’s writer’s room got a little overzealous here. I guess one of the magical things about this show is that it’s pointless to try and tell. But is he into it? Rachel isn’t — she tells Grace that even she’s slept with Adam — insane admission, considering she’s trying to keep things up with Jeremy. Doesn’t matter: He gets it out of Adam, who confirms that Rachel is a cheater. It also confirms that Jeremy isn’t a total idiot, something we all previously had assumed.

This Royal Wedding will take place in London at the Cromwell castle, which is all done up, Everlasting style. Adam’s grandmother is not only as obnoxious as he is, she’s also a total racist — telling Adam after he mentions Grace: “We don’t marry brown people.” She puts his reputation back in play and he buys it, ultimately choosing Anna as his bride-to-be. When it comes down to it, he’s a truly shitty guy. Rachel’s Big Plan is basically to trick Adam into “telling” Anna that he’s not really into her. It works, and she plays runaway bride. It’s live TV, so Chet looks bad in front of Brad (nice one, Quinn!) and we end our season of Everlasting with Anna majestically walking down castle stairs, calling Adam “a cheating slut” (true) who is “not that smart” (also true). At first guess, it seems Anna just earned herself a Bachelorette-style spinoff.

And to think that before this episode, so many of you were Team Adam. Not that the other option is a great one — Jeremy got down on one knee and … nope! He didn’t propose; he told everyone that Rachel is poison and a cheater. He then went straight to her parents’ house and told them that he’s worried about her and thinks she should be institutionalized. Now, that’s cold.

The only relationship worth rooting for by the end of UnREAL season one is between Quinn and Rachel, who are surely a match made in hell, but the best match we’ve got. Rachel knows Quinn ruined her plans to run away with Adam, but after watching how he handled everything, I’m not sure she really cares. “You should be kneeling down thanking whatever that you didn’t end up as Everlasting’s ultimate tabloid idiot. This was a gift,” Quinn says. She’s right! Imagine the fanfare. If anything, it would give the show major attention and ratings. In a way, she sacrificed that to keep Rachel around and — gasp — be the mentor figure Rachel so desperately needs. They further agree not to kill someone again (RIP, Mary, although I’m sure the producers of UnREAL aren’t holding them to that, exactly), and Quinn brings up a show they had discussed earlier on (The Whole Package, a show about “girls with jobs”). But just as season two of UnREAL will have to stick to the perfectly trashy drama we’ve grown to love, so will the fictional Everlasting.

“I love you. You know that, right?” Rachel says to Quinn. “I love you, too … weirdo,” Quinn answers. This is as close to “I do” as we’re gonna get. And if by now you’re not on Team Quachel (I made that up, you’re welcome), you’ve been watching a totally different show.

See you next season on Everlasting — er — UnREAL.

+Comments Leave a Comment
UnREAL Recap: You Giving Me a Wedding, or What?

obits 7:49 p.m.
Veteran Sesame Street Grown-Up Bob McGrath Dies He was 90.
reunions 7:00 p.m.
Is It True? SNL Gave Us a Kenan & Kel Reboot Sketch We’ll drink some orange soda to that.
trailer mix 6:27 p.m.
The Teen Wolf: The Movie Trailer Teases the Return of Allison (Maybe) Allison is in her alive-with-amnesia era.
alien superstar 4:45 p.m.
Avatar 2 Will Show Us the Way of the Weeknd He’s dropping hints that he’s got a song on The Way of Water’s soundtrack.
mic drop 2:17 p.m.
Axl Rose Says He’s Thrown His Mic for the Last Time The Guns N’ Roses frontman retired the tradition “in the interest of public safety” after a concertgoer was reportedly injured.
overnights 2:13 p.m.
Saturday Night Live Recap: Baby, She’s Keke Palmer Everyone’s favorite scene-stealing star steals the show in her SNL debut.
playing the villain 12:49 p.m.
The Boys College Spinoff, Gen V, Promises a Superhero Euphoria And we have a very bloody first look.
chat room 10:35 a.m.
Sex Lives of College Girls’ Pauline Chalamet Defends Kimberly’s Choice “When we’re 18, we’re allowed to start making decisions as adults without fully understanding the ramifications.”
new music 10:15 a.m.
SZA Puts Fans on Alert, Announces New Album S.O.S She revealed the release date during her SNL performance.
mom-ologues 10:03 a.m.
Keke Palmer Turned Her SNL Monologue Into a Pregnancy Reveal Baby, this is Keke Palmer’s baby bump.
trailer mix Yesterday at 4:37 p.m.
Watch the Trailer for HBO’s The Last of Us It’s reluctant sci-fi father figure number two for Pedro Pascal.
coming soon Yesterday at 2:21 p.m.
DC Studios Releases First Look at Blue Beetle’s Alien Scarab Cobra Kai’s Xolo Maridueña will star as the DCU’s first Latinx superhero in Blue Beetle.
art is a prank Yesterday at 1:22 p.m.
Art Basel Is Trolling the Rich Again From the makers of “Banana Duct Taped to Wall” comes an ATM that ranks your wealth.
gma3 goss: what you need to know Yesterday at 12:57 p.m.
This Good Morning America Drama Is Better Than The Morning Show GMA3 co-anchors T.J. Holmes and Amy Robach have reportedly been dating for who knows how long.
tv review Yesterday at 10:00 a.m.
Michael Shannon and Jessica Chastain Make George & Tammy Sing The stars take what could have been a run-of-the-mill music biopic and infuse it with passion.
christmas music Yesterday at 9:00 a.m.
The 10 Best Versions of ‘Winter Wonderland’ The idiosyncratic yet charming classic that everyone from Ella Fitzgerald to Selena Gomez can agree on.
humbled Yesterday at 2:00 a.m.
John Krasinski’s Kids Think He’s Just Some Guy Who works in an actual office, and whom Emily Blunt married “out of charity.”
overnights Dec. 2, 2022
We’re Here Recap: ‘And I Am Telling You I Am Not Going’ A stop in Jackson, Mississippi, yields oceans of tears and a standout performance.
bye twitter Dec. 2, 2022
All the Celebs Who Left Twitter “This place is a mess.”
her man her man her man Dec. 2, 2022
Cher Knows Her New Relationship Might Seem ‘Kind of Ridiculous’ She’s 40 years older than her “fabulous” new boyfriend, Alexander Edwards.
More Stories