Fear the Walking Dead premiered on AMC Sunday night. The Los Angeles spinoff takes place in loosely the same time frame as The Walking Dead pilot, “Days Gone Bye” (directed by show creator Frank Darabont). More important, it gives us a reason to revisit the original pilot, which launched the monster franchise five years ago and was one of the best TV pilots in recent memory.

The Talking
Robert Kirkman said that he wanted to make Fear the Walking Dead a family drama first and a zombie show second, and boy, he wasn’t kidding. The meat of the show is about familial tensions, so in lieu of actual walkers, the show gets heavy with spoken references to the impending apocalypse. There’s Tobias, who brings a knife to school to prepare; he’s our little Cassandra of the world, prophesying the future only not to be believed. (“It’s safer in numbers,” he whispers.) Travis Manawa (Cliff Curtis) — father of the family at the center of FTWD — happens to be teaching Jack London’s “How to Start a Fire,” unwittingly getting his students primed for the apocalypse. And who says the humanities aren’t practical?

In The Walking Dead, Rick is the only person onscreen for most of the time, so there’s no one to talk to. Even when Morgan (Lennie James) and his son Duane (Adrian Kali Turner) appear, the dialogue is kept to a bare minimum. Instead, the audience is given context clues to understand that something terrible has happened here. Sure, long monologues would later come along and suffocate the series (ugh, the farm), but as far as the pilot is concerned, it’s unnaturally quiet. If anything, the major flaw of The Walking Dead was that it didn’t allow Rick to live in this world longer.

The Sounds
Related, what’s notable about The Walking Dead is its sound design. Even in the cold-open for Fear the Walking Dead, the score is used heavily to indicate when something undead this way comes. In contrast, there’s no music in The Walking Dead’s first few moments until the frantic strings that signal the start of Bear McCreary’s unsettling theme song and opening credits sequence. For the most part, what we hear are the ambient noises Rick hears: the rubber on the road, swinging signs, birds, until there’s something slightly amiss — a scrape, a creaking doorknob, a groan.

The Cold-Open
One of the major differences between the shows is evident in their cold-opens: the pacing. In The Walking Dead, Rick Grimes, clad in his sheriff uniform, arrives at a wreckage site on the highway looking for gas, and the entire scene plays out slowly and quietly until there’s a sharp turn, when the “little girl” becomes deadly.

Fear the Walking Dead immediately plays up the theatrics — Nick (Frank Dillane) wakes up in a dimly lit crack den to find dead bodies, and soon thereafter, his companion Gloria chowing down on someone else.

Here he is inside a tank, contemplating shooting himself: 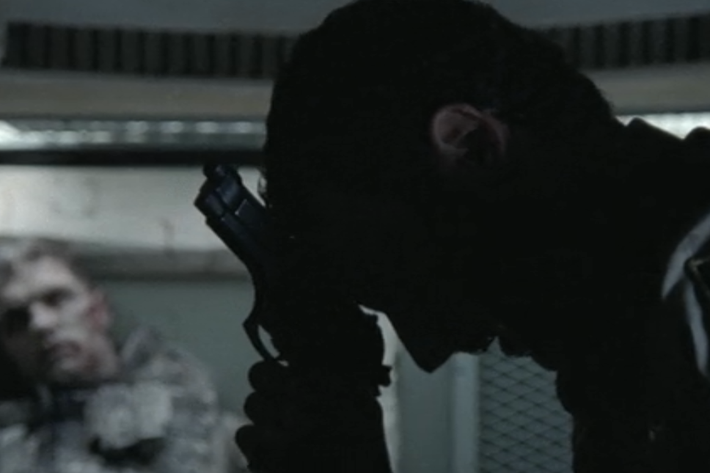 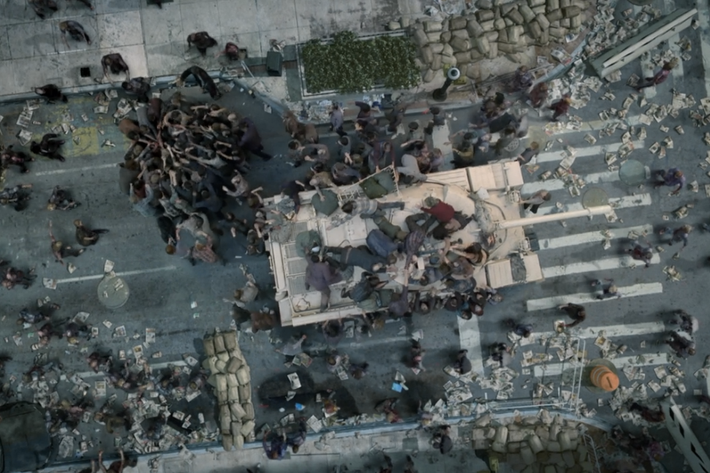 The Acting
Everyone likes Kim Dickens and Cliff Curtis! They are both solidly likable as two sensible, kind-of-cool adults who are just trying to make the best of this crazy world we call high school. If there’s something that really sets apart Fear the Walking Dead, though, it’s Nick (Frank Dillane), their heroin-addict son who looks a little bit like a cross between Skeet Ulrich and Johnny Depp. There’s a comic quality to his character, a bumbling buffoon traversing the world in old-man clothes, that gives the show some levity, whereas The Walking Dead is pretty humorless (okay, the part where Rick is riding a bicycle in his hospital gown is kind of funny). And the best part of rewatching The Walking Dead pilot is remembering that Rick wasn’t always an Über-mensch. He’s a sweaty, pale, post-comatose ball of a man fumbling about as he makes his way out of the hospital. You know, like you or me.

overnights 24 mins ago
His Dark Materials Recap: Your Strength, My Guile Coulter loses at chess, Asriel does an enhanced interrogation, and Mary Malone plays an adventure RPG.
overnights 9:00 p.m.
Below Deck Recap: Seasick Is Camille the laziest worker to ever walk the deck?
obits 8:47 p.m.
Kirstie Alley, Cheers and Drop Dead Gorgeous Star, Dead at 71 She led two hit sitcoms, Cheers and Veronica’s Closet.
cancellations 8:27 p.m.
HBO Max Ghosts FBoy Island After two seasons of the Nikki Glaser-hosted show.
timelines 7:31 p.m.
The Complete History of Ezra Miller’s Controversial Career From kidnapping allegations to pleading not guilty to felony charges to the DCEU’s master plan.
theater 6:46 p.m.
Becky Nurse of Salem’s Dark Brew of Witchery and Dunkin’ Deirdre O’Connell nearly holds together Sarah Ruhl’s play set in modern Salem.
trailer mix 6:37 p.m.
Shudder Acquires Viral Horror Movie Skinamarink It opens in theaters January 13, 2023.
bong hive 6:36 p.m.
Robert Pattinson Awakes From Cryogenic Sleep As Mickey 17 Bong Joon Ho’s Parasite follow-up has a teaser trailer.
the law 6:24 p.m.
Naomi Judd’s Family Has Filed to Dismiss Lawsuit Over Her Death Records In part because journalists are not seeking photos or body cam footage.
explainers 6:03 p.m.
The Biggest Questions Ahead of the Tory Lanez–Megan Thee Stallion Trial Here’s what could happen at the high-profile trial, where Megan has accused Lanez of shooting her in the foot.
vulture lists 5:00 p.m.
Every The Office Christmas Episode, Ranked From Belsnickel to Benihana.
un-plussed 4:25 p.m.
Are They Really Just Gonna Call It ‘Max’? HBO Max and Discovery+’s new combined streaming service is getting closer to picking a name.
sad girls rise 3:41 p.m.
SZA Puts Fans on Alert, Announces New Album S.O.S And a Phoebe Bridgers feature is spotted in the full track list.
overnights 3:14 p.m.
George & Tammy Series-Premiere Recap: Playin’ Possum H-E-double-L breaks loose in Nashville when Tammy Wynette meets George Jones.
my single is dropping 2:25 p.m.
All Caroline Polachek Wants for Valentine’s Day Is Desire Welcome to her island.
toasts and roasts 2:15 p.m.
At the Kennedy Center Honors, George Clooney and U2 Get Their Flowers Gladys Knight, Amy Grant, and Tania León were also celebrated during one of Washington’s most star-studded events of the year.
gma3 goss: what you need to know 1:27 p.m.
T.J. Holmes and Amy Robach’s GMA3 Flirtfest Is Going on Hiatus Holmes and Robach simply “have the day off.”
trailer mix 1:18 p.m.
You People Are Coming to Dinner Kenya Barris and Jonah Hill’s take on the rom-com hits Netflix on January 27.
emergency discussion 1:15 p.m.
How Is His Dark Materials Going to Pull This Off? The series’ final season takes on the difficult task of translating many heady, absurd, and arguably heretical elements from The Amber Spyglass.
*beyoncé voice* texas 12:51 p.m.
Guns N’ Roses Is Suing a Texas Arms Dealer That Stole Its Name “As well as its gun sales, the store also sells a small amount of roses …”
More Stories