Neil and Victor sneak into the infirmary to make some prank calls. They decided to prank camp chef Jonas Jurgensen (a.k.a. Gene Jenkinson), so Victor tells him that his food is contaminated with “dickfarts” and then escalates very quickly to “I’m gonna kill you and fuck you.” Jonas is not pleased. 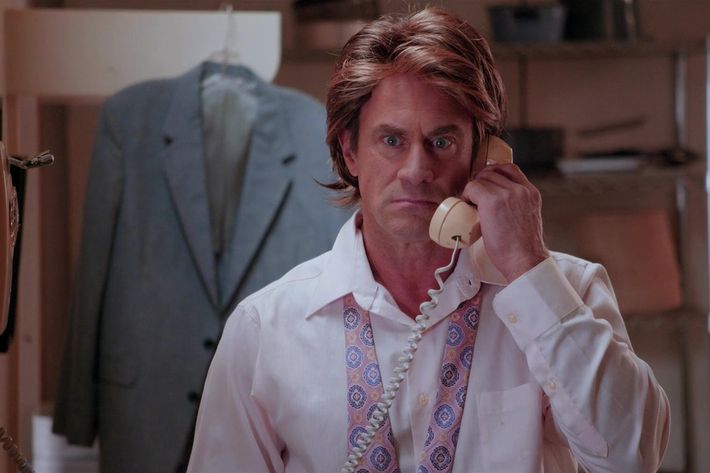 Unfortunately, Victor fails to hang up the phone, exposing himself as the culprit. Jonas is coming for Victor, and he’s out for blood. Jonas trails Victor to his cabin, but even his intense military training can’t match Victor’s stealth skills.

Electro City rehearsals have hit yet another snag. Andy and Katie can’t seem to nail the Dirty Dancing–style leap that’s the centerpiece of the entire show.

Andy nearly quits, discouraged at his inability to execute the maneuver, until Susie pulls out some reverse psychology to lure him back to the stage. Andy hates being forced to do stuff he wants to and reluctantly stomps with a maneuvering echoing the film’s famous plate scene.

Gail and Jonas’s wedding is almost upon us, and Gail, having learned Jonas’s secret identity, turns to her most trusted confidantes: the art students. She breaks down crying while the campers, wise beyond their years, dispense relationship advice. They urge Gail to be honest with Jonas, but Gail is a devout Mennonite, and that means she can’t see her fiancé on the day of the wedding. Of course, this makes no sense. We’ve seen Gail and Jonas talk numerous times today, but it wouldn’t be a David Wain production without some comically overlong lampshade-hanging. Gail gets called out, denies it, and everybody moves on, satisfied. The wise children convince her to go through with the wedding.

Beth and Greg meet with lawyer Jim Stansel (Michael Cera), better known around the courthouse as Johnny Pisspot, to talk about suing the U.S. government. Stansel leans over to his imaginary intercom and tells his imaginary secretary to hold his calls. And because he believes it, we believe it.

It’s 6:29, and that means it’s dinnertime at Camp Firewood. Outside the dining hall, Claude Dumet invites Susie over to his place to work on some last-minute blocking changes (wink, wink), a particularly funny request given the intentionally terrible blocking in this scene. 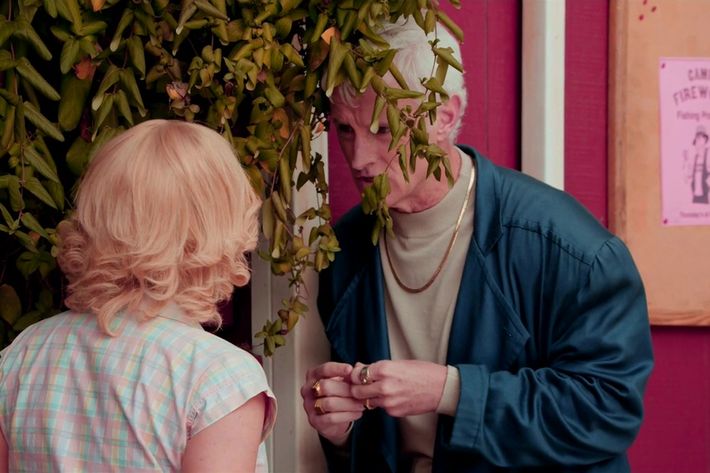 Meanwhile, Yaron continues to butt in on Coop and Donna’s alone time, offering them real wine for their toast to a good summer. Coop is wary of drinking because, obviously, he is 16, but he manages to avoid being a “Freddy fuddy-duddy” and chokes it down anyway.

Coop’s not the only one having a gross dinner. Andy, flirt master, sees something in Katie’s nose. “It looks like a fart.”

Perfect joke, flawless execution. Slowly but surely, the tide is turning in Andy’s favor. “I’ll fart my way into that snatch,” he tells JJ. “Just you watch.” That is … quite a promise.

Out in the woods, Victor flees from Jonas. He comes across a knee-high log, echoing the hay-bale dilemma from the film, but instead inverts the scenario by choosing to go under it. That trick might stop somebody like Neil, but Jonas … Jonas was in the ‘Nam. He easily clears the tree.

The chase continues on with an inexplicably hilarious sight-gag of Victor sprinting frantically as Jonas menacingly skips in the the background.

Ben and McKinley practice their big zoot-suit routine, slowly falling in love with each other.

Beth and Greg spill (no pun intended) all of the details on Xenstar to Jim Stansel, even sharing their dot-matrix printout. “Wow … this proves everything,” Jim exclaims. “You may have just uncovered the biggest government conspiracy since Watergate, which is about seven years ago.”

But Jim’s not totally sure that he can do it. He’s just a lawyer who specializes in public-urination litigation. That’s when Beth delivers a motivational speech that shouldn’t really work, but absolutely does: “You’re Johnny Pisspot. Well, our government is taking a piss … on the whole damn country. Isn’t that the public-urination case of a lifetime?”

Beth and Greg check into a motel to lay low (in one great sight gag, they redo their hair and disguise themselves with … the exact same hairstyles), where Greg romantically compares Beth to an onion and then they hook up. Greg even ditches his walkie-talkie.

At the dining hall, Lindsay is still thinking about what JJ told her — the thing about Eric the rock star, not “about how I can fit a can of Coke in my mouth and bite it and spray Coke everywhere without hurting my gums or teeth, and in the right light you can see a rainbow in it.” (Fingers crossed that we eventually get to see this.) If JJ accompanies Lindsay to the abandoned cabin, she’ll let him touch one of her boobs. For JJ, who, like everyone else, is 16 and sexually inexperienced, that’s not really a choice at all. They set out on a spooky adventure.

Susie and Claude Dumet continue their “working dinner,” where Claude plies Susie with wine until she agrees to have sex with him. This scene is very gross. It’s not not funny, but it’s definitely more gross than funny. Maybe it’s because John Slattery is very skilled at playing a lecherous creep. I mean, look at this guy:

Anyway, they have sex. “I feel uncomfortable, but I know you have my best interest at heart,” Susie tells him as they undress. Gross.

A knife-wielding Jonas continues to stalk Victor through the woods, but Victor manages to hide in the kitchen with some help from Gary.

The chase is called off after Jonas realizes he’s supposed to be at his wedding. 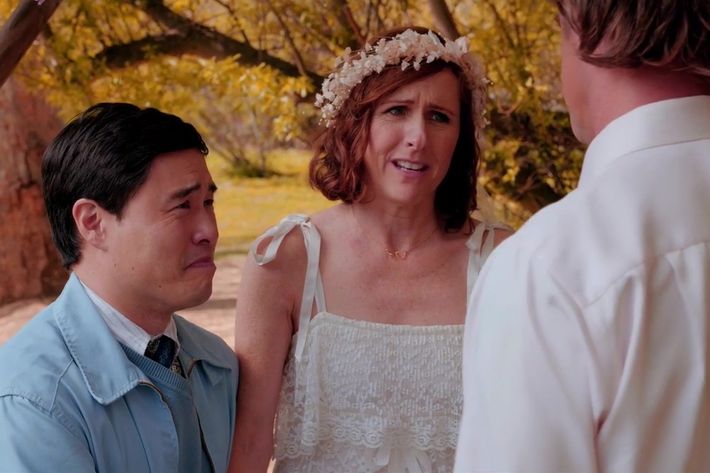 Things take a weird turn when Jeff, the City Hall records clerk from last episode, runs in to object to the union. Jeff has fallen madly in love with Gail. She dumps Jonas/Gene arbitrarily and immediately, and marries Jeff instead. Somehow, Jeff will also eventually get superseded by Ron. Precisely how still remains a mystery.

Gene heads back to the kitchen and takes an old dusty box off the top shelf. He pulls from it a crusty old apron, a ratty sleeveless tee, and an iconic bandana. Gene is back for good.

Over at Eric’s abandoned cabin, Lindsay and the reclusive rock genius finally meet … and he immediately throws her out. But Lindsay has clearly already had an effect on him, because after she leaves, Eric picks up his ax and gets to work.