It serves as a bridge episode for the series, delivering payoffs for many of the story arcs that the series has been juggling, as well as setting up the season’s endgame. It’s more focused than past episodes have been, concentrating much of the show’s cast into a single location: the camp auditorium. And it lets co-writers Michael Showalter and David Wain, and their cast, really flex their well-developed musical muscles.

Lindsay flees rock-star Eric’s hermit cabin and makes her way back to camp. She allows JJ his requisite boob squeeze, and then whips out her typewriter to finish her career-making article for Rock & Roll World magazine. But before she can finish, Eric shows up. “So what the heck do you know about proto-punk anyway?” he asks. He requests that Lindsay join him back at his cabin.

The auditorium is abuzz as campers and staff take their seats. Kevin and Coop are foiled in their romantic endeavors by Drew and Yaron, respectively.

Backstage, Andy talks to Katy about his flirty fart from the previous episode, but she brushes him off, claiming it was no big deal. This angers Andy, who thinks Katy is acting stuck-up. “What do you have for dinner up in the clouds, Katy?” he asks. “Filet mingong?” Another entry in the WHAS comic-mispronunciation pantheon.

Blake and his Camp Tigerclaw cronies prepare for their formal, satisfied that Katie and Andy are on the rocks.

Anyway, showtime! Andy is not a very good singer but Gene is very into it.

Back in Waterville, Beth, Greg, and Jim Stansel prepare for their meeting with Xenstar’s imposing legal team, led by Bill Martinson (a scenery-chewing Bruce Greenwood). When Jim Stansel refuses to drop the case, Xenstar’s lawyers scramble to come up with a new strategy.

Martinson offers the camp a settlement of $5 million, “no more, no less.” Stansel clarifies: “You mean, if we wanted less than $5 million, you’d say no?” 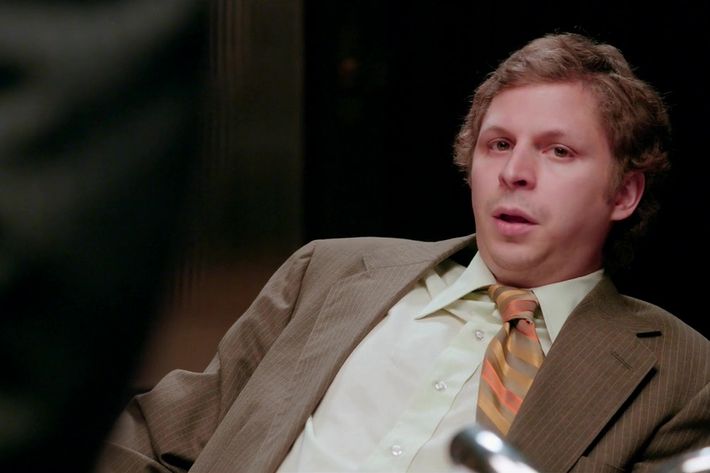 Cera, in particular, is great in this scene as a slightly more put-together version of the timid, stammery characters he usually plays.

Take, for instance, this incredible exchange:

Martinson: Jim Stansel, are you insane?

Jim Stansel: Quite the opposite. I’ve just got nothing to lose. That doesn’t make me insane, it makes me … dangerous.

Martinson: Dangerous is not the opposite of insane.

Jim Stansel: Oh, really? What’s the opposite of insane then, professor. 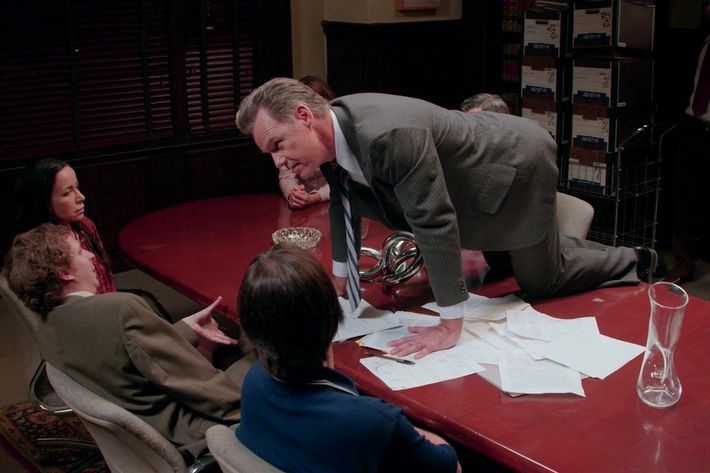 At trial, Stansel flounders. He flees the courtroom, his confidence shaken.

Back in Electro City, Ben and McKinley finally get to perform their pivotal zoot-suit number. Are we given any explanation as to why this musical features conjoined-twin mobsters? No, but it makes as much sense as anything else.

They get so swept up in the moment that they share their first kiss backstage. It is not the only first kiss we’ll see tonight.

During intermission Gail and Jeff, who got married, like, an hour earlier, decide that they should get divorced. And that they should have breakup sex. It is not the only cursory breakup we’ll see tonight.

At the creepy cabin, Eric shows Lindsay his unfinished song. The finished version is trapped inside him, unable to get out. But Lindsay is the one who gives him that final push.

While they work the boards, we hear the opening strains of WHAS classic “Higher and Higher.” Even the song gets an origin story in this series.

Backstage, Ben and Susie simultaneously confess their infidelities to each other. Susie thinks that they can move past it it — “I hooked up with a dirty old man, you hooked up with McKinley, we all make mistakes, we can come back from this” — but Ben thinks he’s in love. Susie is cool with it, if also slightly heartbroken.

Andy and Katie snipe at each other (not the only sniping we’ll see this episode) during their romantic and hysterical duet.

Katie: ♫ Love is the only sentence/you will ever serve ♫

They come very close to kissing, but they do not kiss.

Across the lake at “another summer humdinger of a TigerForm,” Courtney attempts to seduce Blake, sullen from being stood up by Katie. Graham reminds him, “Warned you about what happens when you go digging in the trash, Blake. You end up with trash all over your hands … and arms.” Too true!

Blake is not pleased.

He reluctantly dances with Katie.

During Jim Stansel’s nervous breakdown, robot boy Steve shows up with some damning floppy drives full of evidence against Xenstar. Stansel has the judge’s interest. “Evidence, you say? I’ll allow that.” After examining the disks for two seconds — but not putting them into a computer, he literally just looks at the disks — the judge rules in favor of Camp Firewood, and orders Xenstar to clean up the toxic waste. Everyone in the courtroom dances?

Xenstar counsel Martinson has to resort to plan B. He mobilizes the Falcon using a confusing metal thing.

Electro City is just about ready to wrap up, with Andy getting sent to the electric chair. He is executed, very convincingly. But in a shocking twist, he comes back as a ghost. He sings to Katie: “Yes, I am dead/Yes, I’m a ghost/But I still got the one thing I wanted the most/It’s you.”

It’s time for Katie and Andy to attempt the Lift. Katie is scared, but Andy promises to support her. Everything slows to a crawl, and REO Speedwagon’s “Keep On Loving You” begins to play.

Everyone’s expression in this sequence is priceless. Let’s take a moment to bask in the glory. 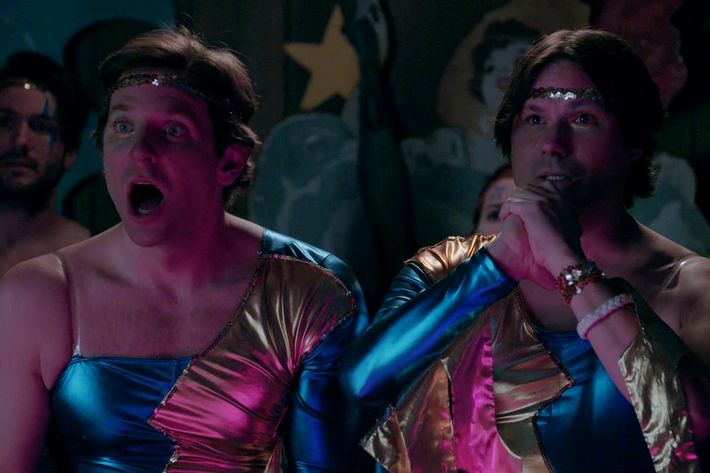 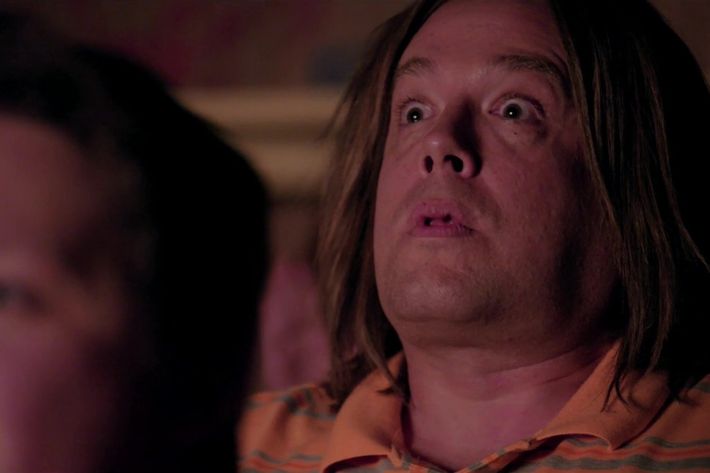 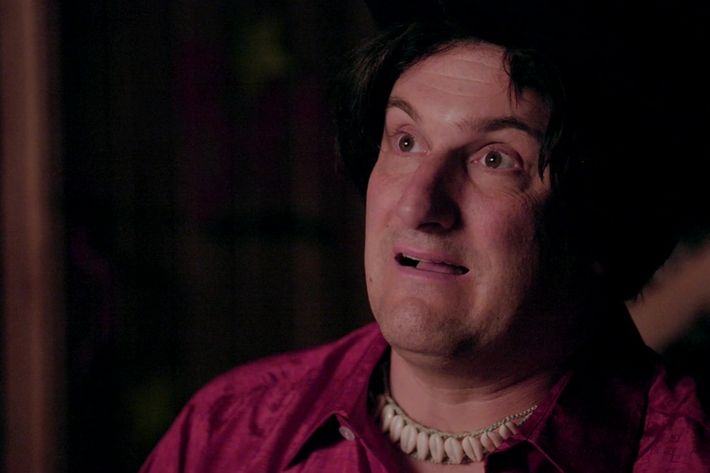 Andy and Katie finally kiss. Because this is Wet Hot American Summer, it is all incredibly sloppy. Spying from Camp Tigerclaw, Blake stomps off, ready to kill Andy.

Eric and Lindsay also hook up while in the cabin working on their music. But Lindsay knows that she’s gotten too close to the story. She Irish-good-byes.

With a hit production under her belt, Claude Dumet invites Susie to come be his assistant in New York. She declines, knowing that her place is at Camp Firewood. “And besides,” she says, “I’m 16 years old. Our relationship is completely inappropriate.”

Before returning for their standing ovation, Andy and Katie agree that their kiss was just acting (“I’m just some guy that farts in your face and makes you smile”), though they both know that they’re in denial.

What follows is a brief, and unique scene in this series. Wet Hot American Summer doesn’t really specialize in complex characters. In fact, it actively avoids them. Character motivations are presented plainly to the audience. But as the camera lingers on Andy during the curtain call, Paul Rudd delivers a surprisingly effective bit of work showcasing Andy’s internal struggle.

The Xenstar lawsuit ends with Jim Stansel, now “the hottest lawyer of the year,” giving a triumphant press conference. But as Beth, Greg, and robot-boy Steve prepare to head out, the Falcon swoops in again, gunning down Stansel, as well as Greg. It was pretty clear Greg was never going to make it out of this season alive.

So ends the best TV episode of the year. Here’s a GIF of me when the credits rolled.

snow jams 23 mins ago
The 50 Best Original Christmas Songs Since ‘All I Want for Christmas Is You’ Queen of Christmas, meet your disciples.
last night on late night Yesterday at 11:25 p.m.
John Mellencamp Has No Interest in Doing a Super Bowl Halftime Show He said so on WWHL.
chat room Yesterday at 10:05 p.m.
Leo Woodall Needed Some Time to Digest That White Lotus Reveal “I’d been told I might have a rumble and tumble with a couple of characters, but I didn’t know who.”
whodunnit? Yesterday at 10:03 p.m.
The White Lotus Kill or Be Killed Report: Two Can Keep a Secret Well, a couple of names just shot to the top of the suspect/victim list.
overnights Yesterday at 10:03 p.m.
The White Lotus Recap: Whoopsie As family secrets are being kept and revealed back at the resort, a new one is brewing in Palermo.
overnights Yesterday at 9:15 p.m.
Yellowstone Recap: As Good As Gone The dynamic between Jamie and Beth changes for the first time … ever?
overnights Yesterday at 9:00 p.m.
Dangerous Liaisons Recap: The Sex Dungeon The growing bromance between Camille and Valmont is delightful.
theater review Yesterday at 8:49 p.m.
KPOP Offers a Not-Actually-All-Access Pass A musical about making it big feels neutered by its own backstage process.
justice for booster gold Yesterday at 6:25 p.m.
James Gunn Wants All the DC Movies, TV, and Games ‘Connected’ He and Peter Safran have big plans for the DCU.
coming soon Yesterday at 5:50 p.m.
Helen Mirren Will Travel to 1923 for Yellowstone Prequel A new trailer dropped showing off Mirren and Harrison Ford smoldering at each other.
fancasts Yesterday at 5:40 p.m.
Hey, Antonio Banderas Knows a ‘Fun’ Guy Who Could Play Zorro If he was asked to do a third movie, he would want to pass the mask to this former co-star.
goth girls Yesterday at 4:22 p.m.
Jenna Ortega Didn’t Want to Copy Christina Ricci’s Wednesday According to Ortega, she and her co-star never even said the word Wednesday to each other on set.
performance art? Yesterday at 2:51 p.m.
The 1975’s Matty Healy Is Doing a Lot on Tour From kissing fans to eating raw meat onstage, here’s a roundup of what he’s been up to.
commit to the bit Yesterday at 1:09 p.m.
Martin Scorsese Is in on the Tumblr Memes He has confirmed that he made the nonexistent 1973 film Goncharov.
fame Nov. 26, 2022
Questlove, John Leguizamo, Jennifer Beals, and More Mourn Irene Cara Remembrances poured out across the industry.
charges Nov. 26, 2022
Squid Game’s O Yeong-su Indicted for Sexual Misconduct O claims he merely held a woman’s hand to guide her around a lake.
obits Nov. 26, 2022
‘Fame’ Singer Irene Cara Dead at 63 The multihyphenate sang two Oscar-winning title songs.
overnights Nov. 26, 2022
RuPaul’s Drag Race U.K. Season-Finale Recap: Megamixed Up Drag Race is dancing on the thin line between reality-TV ritual and reality-TV tedium.
oh deer Nov. 26, 2022
Please, Was the Original Bambi Not Horrifying Enough? The guy behind the Winnie-the-Pooh slasher is now working on a Bambi horror movie.
talking about it Nov. 25, 2022
Kim Petras Defends Her Concert Chat With Barbie Ferreira The pair were filmed catching up during a Rina Sawayama performance.
More Stories