“Staff Party,” WHAS’s penultimate episode, is a slight lull in the action, slowing things down just a bit before they ramp up again for the season finale. There’s not even a single death in this episode — unless you count Kevin dying inside.

With the musical over, it’s time for the campers to hit the hay and the counselors to hit the staff party. Ben and McKinley, now a couple, agree to go together. Ben will be DJ Ski Mask, which seems like a weird DJ gimmick, but we’ll get to why later.

Over in their bunk, Neil and Victor get ready for the most romantic night of their lives. Neil’s high-school girlfriend Sherri is coming to visit, which at least partially explains why he is wearing a full tuxedo to a sleepaway-camp staff party.

Victor, meanwhile, is ready to have sex for roughly the billionth time. “It really depends on who dings my dong first,” he explains. “It’s like, bing-bong, who’s there? ‘Ooh, two of us at once!’ Hey, take it easy, ladies, get in line, okay? I’ve only got so many balls to pass around: one, two, that’s it!” He’s had sex before, and everybody knows it. Victor, the sex man. They get ready by dumping too much cologne right on their junk.

Undercover journalist Lindsay, back from her visit to Eric’s cabin, is having second thoughts about her big camp exposé. “These people are my friends,” she tells her editor. “I’ve known them for 12 hours! I can’t hurt them.” He orders her to file the story anyway.

Ben is having a great time DJ-ing the staff party. “Hey, party people in the house, it’s me, DJ Ski Mask, otherwise known as Ben the theater counselor. It’s me!” That line is particularly helpful because we can’t see Bradley Cooper’s face, so it’s nice to know that it’s definitely A-list actor Bradley Cooper under the mask and not a body double.

Meanwhile, Andy and Katie are on the rocks, after their romantic kiss that both of them denied was romantic.

After striking out once, Victor goes to refill at the keg and runs into dance coach Rhonda. She flirts with him and Victor gets incredibly flustered. It’s actually kind of surprising how good Ken Marino, 46, is at playing a flustered teen.

Rhonda offers to have sex with him, but Victor manages to play it cool. He runs off to grab some condoms.

Coop, Donna, and Yaron show up to the party. In the words of Katie, Coop’s “really going for it,” fashion-wise: hat, vest, one earring, silk shirt. 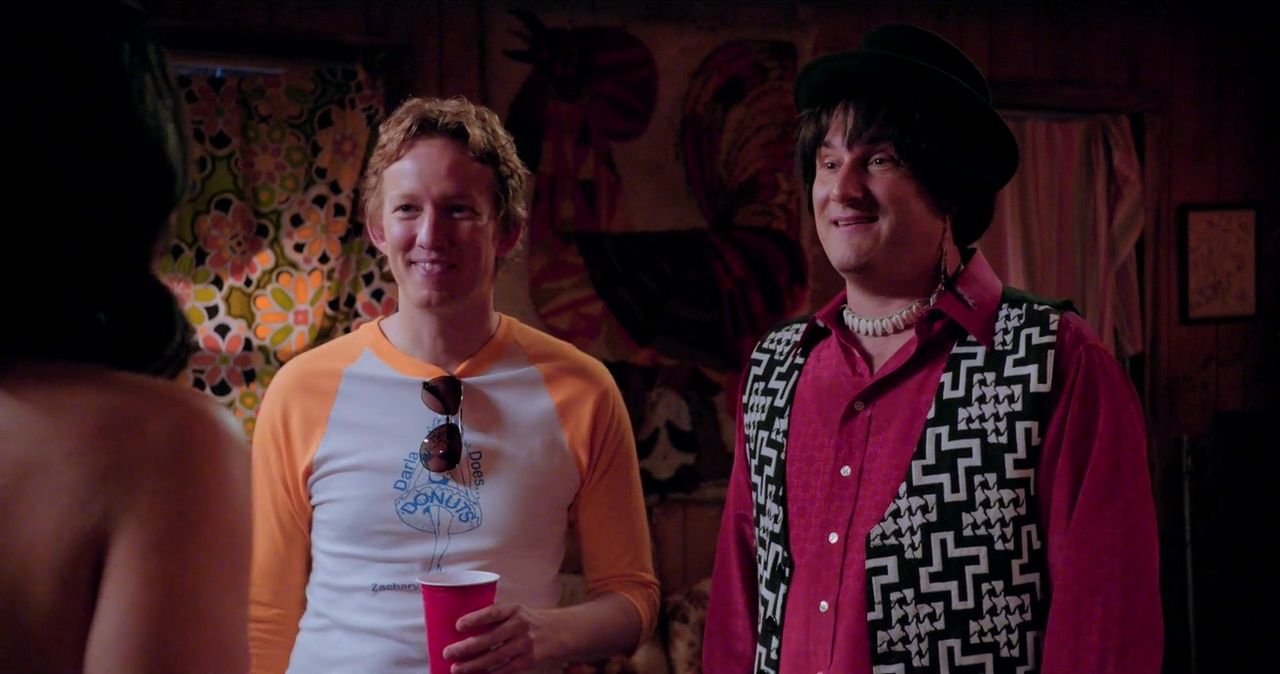 At the convenience store, things get a little awkward for Victor. To cover up his sex-related purchases, he also tries to buy a key chain, a TV Guide, a comb, and a pack of cards. Despite Victor’s discretion, the clerk behind the counter needs a price check … on the key chain. “It’s not for me, I swear,” Victor tells the old lady behind him. “I don’t even have keys.” Everything that’s not the condoms and lube needs a price check.

“Just give me the condoms and the fuckin’ lube!” he yells before storming out. The old lady behind him in line remarks, “Key chain … what a pervert.”

Back at the staff party, Andy leads the counselors in a rousing sing-along of “I Am a Wolf, You Are the Moon.”

Lindsay is still at the nurse’s office calling in her big scoop, which concludes with a recap of everyone we’ve met so far: “the nice guy [Coop], the popular girl [Katie], the rebel [Andy], the goody-goody [Susie], the ladies’ man [Victor], the sweetheart [Ben], the theater kid [McKinley], the flirt [Abby], the sidekick [Neil], the wild man [JJ], the jock [Mitch, a.k.a. the can of vegetables], uh … that guy [Jeremy], never seen her before [Becky], Weird Al Yankovic [Weird Al Yankovic], and, finally, the one I fell in love with [Eric].” She starts to cry as she wraps up her betrayal.

Neil and Sherri are really hitting it off at the party. The night is going great until … JJ starts a round of the nose game, which, as anyone who’s gone to camp knows, is law.

Neil betrays Sherri, who does not understand the game, by leaving her as the last to put her finger on her nose.

They start a chant calling Sherri a pig, and she flees the around house.

While the counselors are away, the campers play Seven Minutes in Heaven.

Amy nearly picks Kevin, but her choice is disqualified, and she’s sent to the closet with Drew (continuing to definitely be the worst) instead. That’s when Kevin sees his chance to make a grand gesture. “Please don’t go in that closet for Seven Minutes of Heaven with Drew,” he pleads, “but instead, spend seven billion minutes of life with me.” Anybody familiar with this series can see where this is heading: She rejects him.

At the round house, Coop, Donna, and Yaron have a lopsided three-way hookup.

Coop is clearly uncomfortable, but as Donna and Yaron explain, a tongue in the mouth can mean many things. It can mean “hello,” it can mean “good-bye,” it can mean “peace.” You know, just like the Hebrew word shalom. Holding Coop’s face, Yaron sums it all up: “This is the true meaning of kibbutz.” (Not really?) But Coop still can’t handle it. He breaks up with Donna.

Victor and Rhonda try to have sex, but somehow, Rhonda figures out that Victor is a virgin — an embarrassing secret that Victor hid very well.

She says he can lie to people and say that they had sex anyway.

Nurse Nancy receives an interesting call from a former nursing pal/current typesetter at Rock & Roll World magazine. He faxes her Lindsay’s article, “Camp Firewood: More Summer Than You Bargained For.” 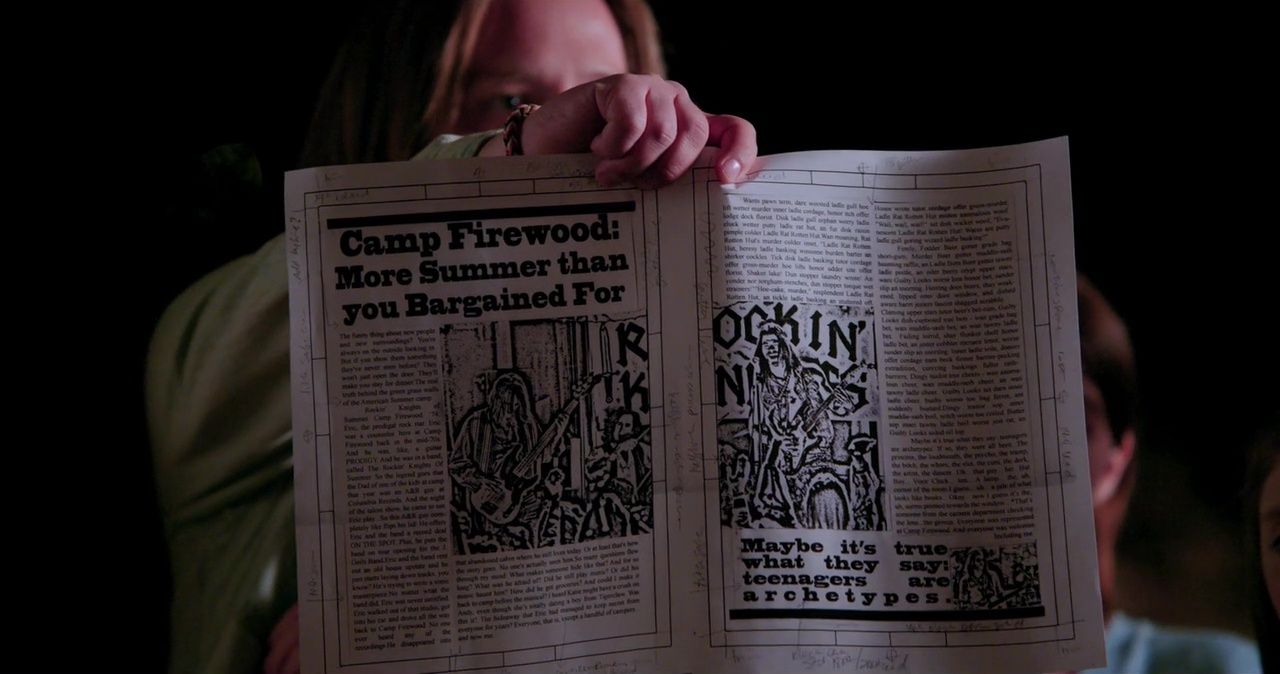 Feeling betrayed, JJ kicks her out of camp and Nurse Nancy asks Lindsay to return the diaphragm she’d borrowed in a previous episode. JJ rips her article up into excessively small pieces.

Eric also shows up to call her a “bloodsucker,” then stomps off to trash his studio and destroy the song that they had made together.

As with all romantic relationships on this show, Andy and Katie’s resolution moves at a breakneck pace. He confesses that he wasn’t acting when they kissed onstage, she says the same, and they have another sloppy make-out session.

Spying them through his binoculars over at Camp Tigerclaw, Blake rallies his preppy troops for an epic showdown.

Next up: the season finale. Who will live? Who will die? Where is Beth? All these questions, and more.