The second episode of Wet Hot American Summer: First Day Of Camp (or WHAS: FDOC for short) opens not at Camp Firewood, but in … New York City? Specifically, we’re taken to the offices of Rock & Roll World magazine. They’ve hit a slump, and stories about some random DJ named Grandmaster Flash aren’t gonna cut it. They need to shake things up.

So, who steps up to the plate? Lindsey (Elizabeth Banks), who was conspicuously absent from WHAS’s first episode, and up until now was supposedly a 16-year-old counselor. It turns out she’s a Columbia-educated, 24-year-old journalist in the big city, and she’s got an idea: She’s heard about this camp up in Maine …

It’s a solid idea, but can Lindsey really pass for a 16-year-old? Yes, with a single, well-placed hair clip.

“This is Rock & Roll World magazine! Are we just gonna cover rock and roll? Or are we gonna cover … the world?” Lindsey’s editor agrees that she has a point.

By the time Lindsey arrives in Maine, the activity orientation stations are up and running.

Coop, in the meantime, is off trying bond with his campers, including sweet baby Kevin and Drew, who is the Usain Bolt of being awful. Drew continues WHAS’s long tradition of impressive middle-finger salutes.

They’re interrupted by a stampede of people: “A cool thing is happening over here! Everyone run toward it!” It turns out that the cool thing is Israeli soccer counselor Yaron (David Wain), who immediately clicks with Donna — she’s eager to show off her knowledge of his homeland.

(A side note: Wain’s Israeli counselor impression is perfect, down to his just-off syntax and the interstitial ’ehs that populate his lines.)

Lindsey, using the skills she picked up at the Columbia School of Journalism, quickly infiltrates the counselor ranks with a bulletproof cover story. She’s from Manhattanville, Ohio — you know, in the center-upstate-downtown part.

Over at the girls cabins, one of the campers gets her first period. Nurse Nancy and Katie help her out with a tampon, and from the bathroom stall emerges Abby Bernstein (Marisa Ryan), now a woman.

The “Electro City” rehearsals are not going well. None of the actors are inhabiting their roles particularly well. As Claude Dumet likes to say, you have to “inhabit it, or leave it in the cabinet.” Dumet’s assistant Rhonda (Michaela) has been brought in from New York to whip this production into shape. She was late arriving because some guy jumped in front of the F train.

By the way: Here’s a fun meta-game to play for the rest of this season. Try to find another shot in which both Bradley Cooper and John Slattery appear.

Susie is worried that Ben doesn’t love her anymore. They haven’t even had sex yet. Ben manages to reassure her of his love with another tender kiss.

Lindsey’s undercover operation reaches a new stage when she discovers a mysterious cabin that nobody wants to talk about. What mysteries lie within? JJ is spooked when she brings it up. 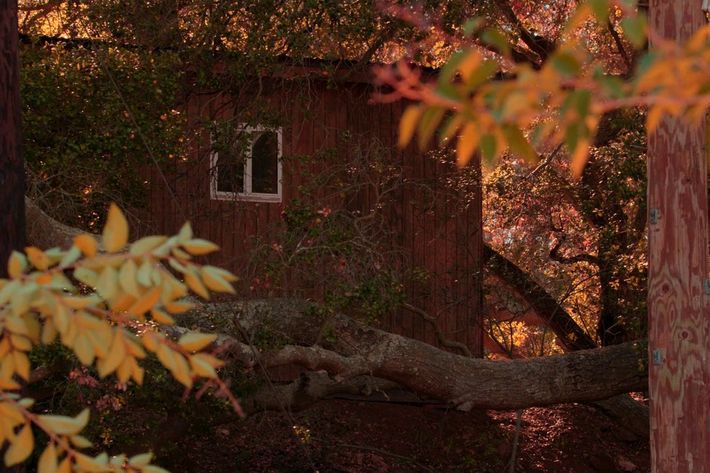 It’s lunchtime now. Finally, we get to see Gene, the crusty, slightly insane veteran of Vietnam (sorry, “the ‘Nam”) played by Christopher Meloni. 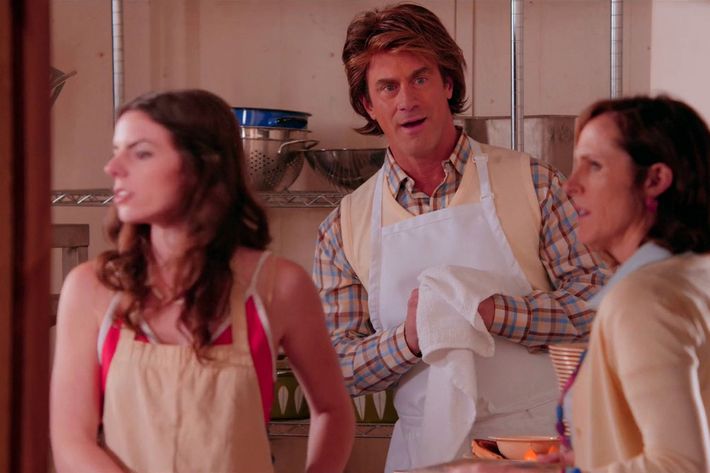 Wait a minute. That’s not Gene, it’s Jonas Jurgenson … and he’s engaged to the arts-and-crafts counselor, Gail (Molly Shannon). And they’re getting married later today! Something’s fishy here … The two met at a singles disco mixer, and with dance moves like this, it’s obvious why Jonas fell for Gail.

Out in the woods, Greg and Beth stumble upon the toxic-waste dump. They only have hours to restore the local ecology or everything in the immediate area will die.

Also discovered in the woods: Kevin’s discarded bathing suit, covered in shit. It turns out that Kevin didn’t make it to the bathroom in time. But he can’t say that, so he comes up with an airtight explanation: Someone came into his bunk, stole his bathing suit, took a shit in it, and left it in the woods.

Who would do something like this? Mrs. Patty Pancakes, that’s who. 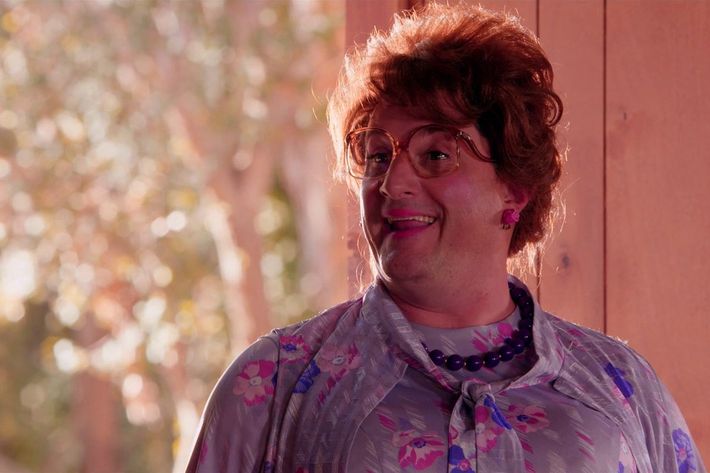 Ooooooohhhhh, it was Coop in disguise! Great work, Coop!

Or at least it was great work until Coop takes the poo-covered bathing suit over to Donna and gets in an argument with her.

Back at the dump site (the toxic-waste one), Mitch reveals that he let Xenstar leave the toxic sludge in the woods because the camp is in serious debt. He gets worked up and falls into the sludge … along with a familiar can of mixed vegetables. 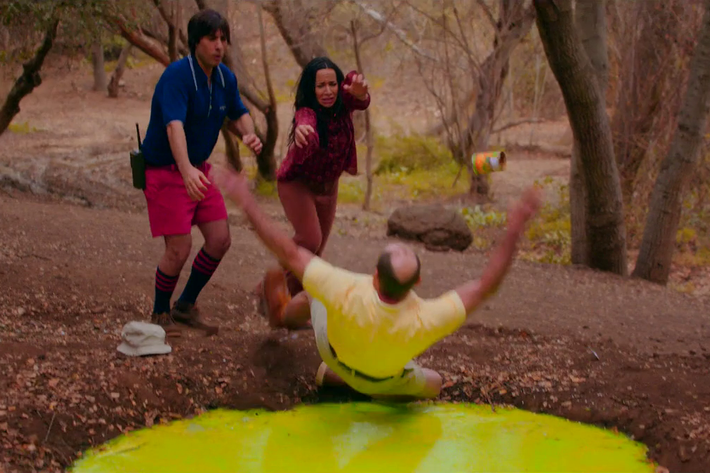 End of episode two. But is it also the end of Mitch?

+Comments Leave a Comment
WHAS: FDOC Recap: Rock and Roll and the World

vulture lists 3:00 p.m.
Every M. Night Shyamalan Movie, Ranked Making sense of the director’s tricky career.
explainers 2:45 p.m.
What the Great Netflix Password Crackdown Means for You Let’s talk about it.
overnights 2:34 p.m.
Dear Edward Recap: Good Night, Stupid Everyone is adjusting to their new normal. “Normal” being excruciating and debilitating grief.
grammys 2023 2:34 p.m.
Beyoncé(’s Husband) to Perform at the 2023 Grammys Alongside DJ Khaled, Rick Ross, Lil Wayne, John Legend, and Fridayy.
close read 1:50 p.m.
The 1619 Project’s Standout Episode Resonates With Infuriating Timeliness A six-episode adaptation of the sprawling New York Times effort can’t help but feel scattered, but “Capitalism” is honed to a sharply incisive point.
vulture asks 1:32 p.m.
What Reality-TV Stars Should Star in The Traitors Season Two? From Monet X Change to Henry Louis Gates Jr., Vulture has a veritable smorgasbord of opinions.
endings 1:21 p.m.
Even Nicolas Winding Refn Doesn’t Know What Copenhagen Cowboy’s Ending Means “Sometimes getting everything is not the right answer.”
By Roxana Hadadi
sundance 2023 12:55 p.m.
A Complete List of Films Sold at Sundance 2023 (and Their Price Tags) Sony Pictures Classics picked up mother-daughter drama The Persian Version.
no bars 12:02 p.m.
Jafar Panahi Has Been Released From Prison Following Hunger Strike The Iranian filmmaker protested his wrongful detention for 48 hours.
vulture 10x10 12:00 p.m.
The Retreat Puzzle 27-Across, Four Letters: Color favored by Elle Woods.
overnights 12:00 p.m.
The Legend of Vox Machina Recap: Actually, Split the Party The Legend of Vox Machina continues to smartly deviate from what happened in Critical Role.
now streaming 11:54 a.m.
The 6 Best New Movies and TV Shows to Watch This Weekend No, we didn’t forget the Grammys.
vulture sports 11:39 a.m.
Super Bowl LVII Commercials Kick Off Early The real stars of the Super Bowl.
touch grass 11:01 a.m.
GloRilla Drops a PSA Watch out for them “Internet Trolls.”
chat room 11:00 a.m.
Raye’s First Album Was About Making Ugly Thoughts ‘Sound Beautiful’ The singer says her long-awaited debut is “deep, innit?”
overnights 11:00 a.m.
Dear Edward Series-Premiere Recap: The Wreckage Be warned that Apple TV’s latest drama will leave you sobbing at some point.
sequels to prequels 10:27 a.m.
1923 Renewed for a Second Season Not Called 1924 The Duttons stay conniving through the centuries.
movie review 10:21 a.m.
Knock at the Cabin Is M. Night Shyamalan’s Best Film Since The Village Anchored by an incredible Dave Bautista performance, it’s a triumphant return to the sincerity and confidence of the director’s early work.
By Bilge Ebiri
this week in late night 10:18 a.m.
Dave Bautista’s Commitment to the Bit Won Late Night This Week Plus Natasha Lyonne Natasha Lyonne–ing out and Salma Hayek Pinault discussing the frailties of the human body.
overnights 10:00 a.m.
Shrinking Recap: Grieve Hard Jimmy’s new method of addressing his grief may effectively numb his pain, but his emotional bill will be due soon enough.
More Stories