Episode three opens right where episode two left off, with Mitch sinking into a bunch of toxic sludge. He yells something about a “death code” and then he and his precious can of mixed vegetables vanish below the surface. Greg and Beth realize they have to play it cool, or else the parents will start to ask questions.

Donna visits Coop and presents him with a special gift: a shofar.

Beth and Greg aren’t back in camp more than three seconds before a group of irate parents confront them, asking to speak to Mitch. They need a diversion tactic. Beth points across the field: “He’s right over there in the soccer field.” 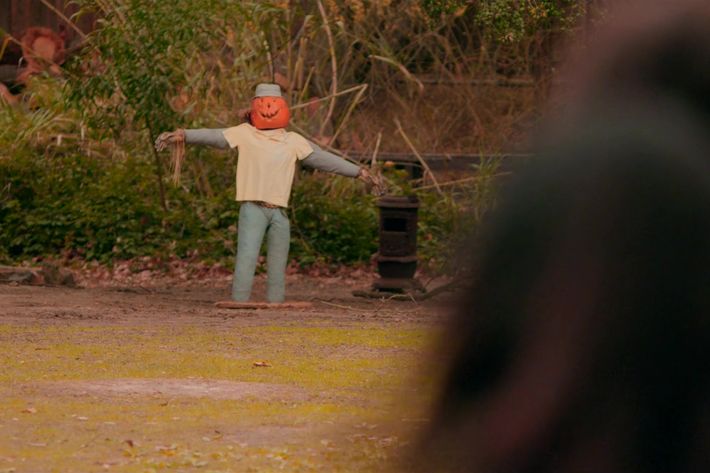 Crisis averted, for now. “We only have an hour, maybe two, before those parents realize that’s not Mitch.”

Andy continues his quest to seduce Katie, angering Blake and the Tigerclaw lackeys with his “textbook nymphomania.” It just makes them want to smash stuff.

But they decide to wait until after dinner. Katie once again rebuffs Andy’s advances, which is pretty tough to do given that Andy’s laying it on thick with winning lines like, “He can’t blow your life like I can.”

Beth and Greg realize that they’re going to have to hack Xenstar if they want to save the camp, but who would have access to the top-secret network codes? Someone with a military background, probably. This gives Beth an idea …

They head over to the cafeteria to talk to Jonas, because they need him to hack into Xenstar’s database. “Mainframe? Hack? Prove? It? Why’d you come to me for help? I’m just a camp chef. I don’t know a mainframe from a picture frame?” 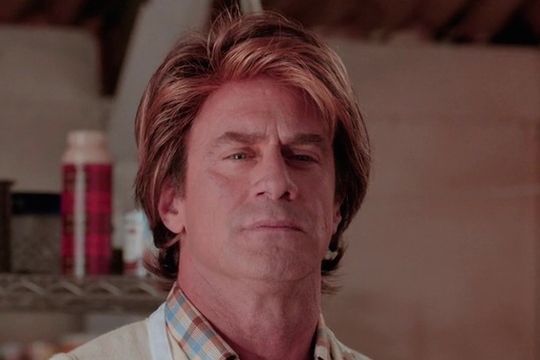 That’s when Beth reveals that she knows Jonas was in the military, specifically the ‘Nam. Jonas denies it, but Beth tricks him into revealing himself.

Jonas wants to talk to Mitch. Unfortunately, Mitch is dead … or is he?

“This is me.” In a retcon far more absurd than Lindsey the rock journalist, the original film’s hallucinated talking can is now a character that exists in the show’s reality.

Coop is busy bragging about the shofar Donna got him, only to be shocked when McKinley and JJ also show up with shofars. It turns out Donna got pretty much everyone a shofar. “They must sell them in packs over there,” McKinley guesses. JJ and McKinley then show great respect to the religious objects by having a dick sword fight with them.

Katie heads back to her bunk, only to find Blake there, waiting for her, reading her diary, and adjusting his triple-popped collar. 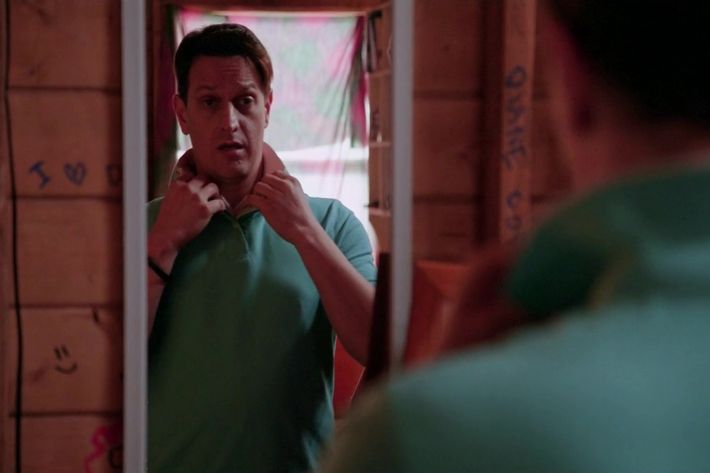 Blake, a consummate mansplainer, asks if Katie really wants to keep hanging out with a bunch of sunburned Jews, and she replies that she might not be able to make it to the Camp Tigerclaw formal.

Back at the mess hall, Mitch begs Jonas to access the dark recesses of his brain and get the computer codes so they can hack Xenstar. That gives us this amazing shot of Jason Schwartzman nodding resolutely in agreement with a talking aluminum can.

“You’re opening a can of worms you might not be able to close,” Jonas warns.

“Don’t tell me about cans,” Mitch shoots back. “I know about cans.”

Jonas gives up the codes and then snaps out of his fever dreams, clearly a changed man. We get some pivotal foreshadowing.

Donna, apologizing to Coop for the shofar fiasco, makes amends with another aesthetic tweak: this undersize hat and a shiny shirt. Is it possible for someone to look too hot? 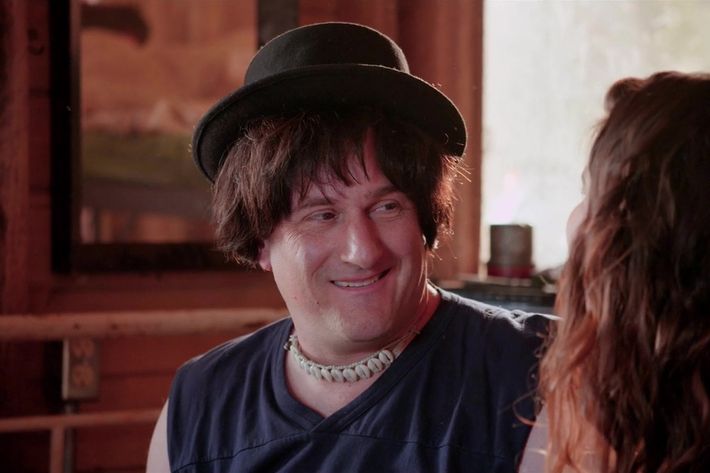 Over by the mystery cabin, Lindsey presses the other counselors for info on what lies inside. JJ eventually decides to spill the beans on the cabin’s inhabitant, Eric, while Lindsey secretly takes notes.

Eric was supposedly a former counselor who hit it big with his band, the Rockin’ Knights of Summer, and their huge single, “Turn It Up.” While the band was working on its masterpiece, Eric apparently went nuts, never satisfied with the music. He is believed to have driven straight back to Camp Firewood and disappeared into the abandoned cabin. It looks like Lindsey has stumbled upon the Rock & Roll World scoop of a lifetime.

Beth and Greg, network codes in hand, head over to see the camp’s resident robot boy, Steve. With the codes, Steve hacks into Xenstar, revealing all of its dirty secrets.

Beth and Greg seem to have stumbled onto a vast government conspiracy that reaches the upper echelons of the federal government. Their hacking has, unfortunately, tipped off the feds. None other than Ronald Reagan himself orders Ron von Kleinenstein (art teacher Gail’s future fiancé) to handle the situation. 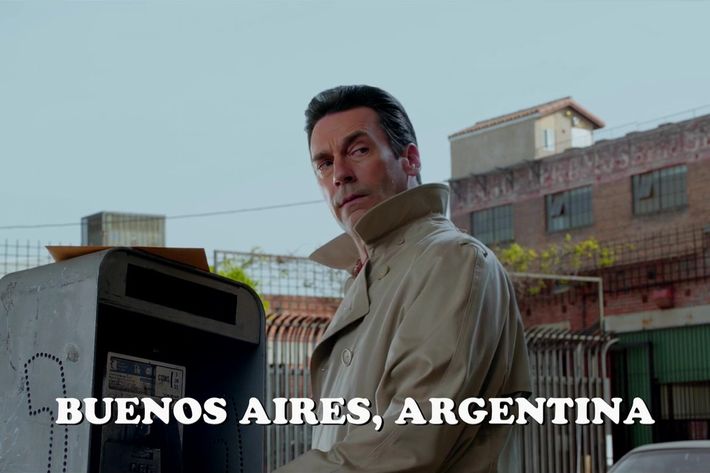 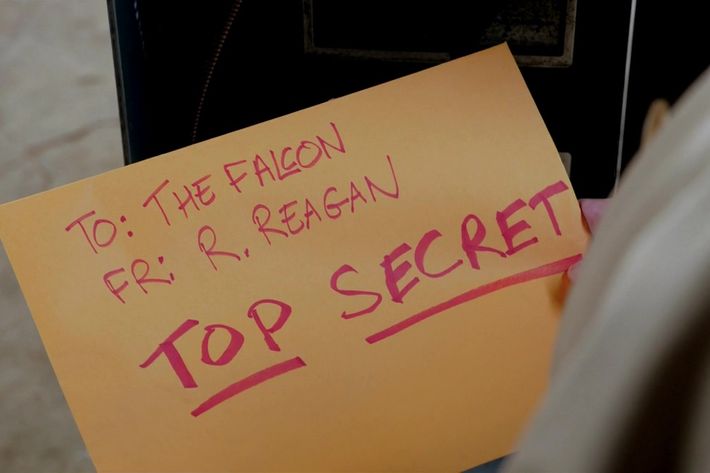 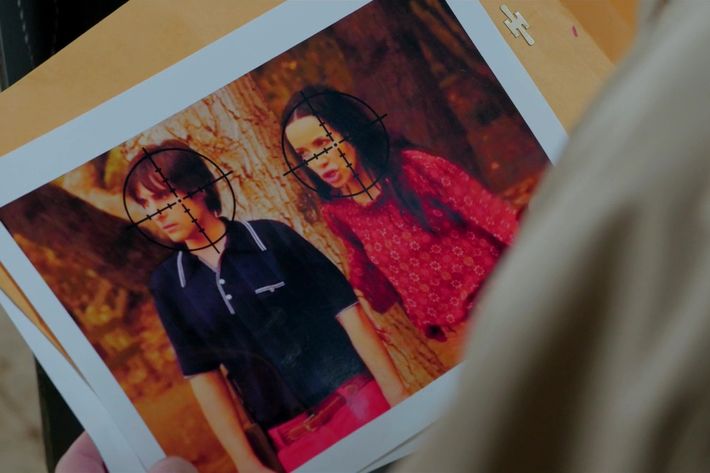 +Comments Leave a Comment
WHAS: FDOC Recap: The Origins of a Can of Veg