It’s time to unlock the full potential of our brains with Limitless season one, episode two, which is called “Badge! Gun!” Great episode name. I hope this naming schema applies to every episode. Next week: “Car! Hat!”

In case you missed last week’s rollicking pilot, here is what happened: Brian took the Limitless pill, NZT, and now he works for the FBI with Agent Rebecca Harris. But he also works for Bradley Cooper (character: Eddie Morra). Intriguing!

This episode continues where we left off last week, with Brian and Rebecca on a rooftop. “It’s time,” Rebecca says, and then we get another shot of Brian’s mouth. This show loves mouths.

Here’s another thing this show loves: time-saving montages. We could sit through another three episodes of Brian getting used to his FBI handlers, but instead we get this nice little sequence where he gets studied by scientists (they count how many Cheetos he eats), solves Rubik’s Cubes, does complex math, and draws simultaneously … and makes papier-mâché dolls of his bodyguards.

At the hospital, Brian’s dad is still recovering from his liver transplant, and Brian’s successful siblings are very skeptical of why he — a deadbeat civilian with no discernible talents — now works for the Feds. Brian neglects to mention the Flowers for Algernon routine he’s working on. His sister cuts right to the serious stuff, though: Does he have a badge and a gun? Nope! But he does have these:

While Rebecca and Boyle head to Fort Greene to check out a suspicious fatal car crash involving a muckraking journalist, Brian gets locked in the file room to take NZT and become fluent in Farsi. It’s not very glamorous work, but it’s his first day, so he plays along.

Also, it’s been like five minutes, so it’s time for another uncomfortable mouth close-up.

Brian learns Farsi, no big deal, and in his spare time looks into the assassinated-journalist case. He figures out via archival photos and some light Googling that the car was probably rigged to explode. Unfortunately, Rebecca says he can’t leave his makeshift holding cell. He makes the “bummer” face. 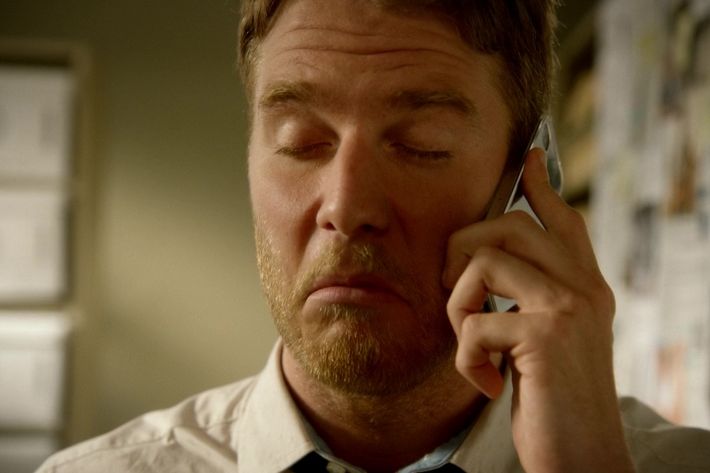 Let’s pause for a minute. It seems like the Federal Bureau of Investigation might not have thought this whole setup through. NZT makes people crazy-smart and lets them believe that they can do crazy things. So the FBI decided, “Um, let’s give this schmuck with no regard for authority a pill that makes him a billion times smarter than any of us and hope that he follows the rules.” That’s not a very good plan! In fact, I would go so far as to say it is a bad plan.

Brian does some complex mental math …

… and determines that he can escape by throwing his body through some drywall.

He rubs that dirt off his shoulder and heads out into the world, very smart and very high, to make a model bomb to show the agents.

It turns out that — surprise, surprise — it is not very easy to find bomb-making supplies in Manhattan, and they are expensive. To fix that, Brian manages to literally bend time and space, taking a bus all the way down to Atlantic City to gamble, earn some money, and build his bomb. That’s, like, an eight-hour round trip, and Brian does it in approximately three seconds? There are casinos in Yonkers, too, dude. Could’ve saved some time.

Brian makes his way to Fort Greene, presumably via public transportation, with three bombs?? And he doesn’t get arrested. They find a lead on their case, and Brian, crashing from the NZT comedown, takes a powernap. Back at home, Brian tries to figure why Eddie Morra wants him to work for the FBI. So he does what any part-time genius would do: He Googles “Senator Edward Morra NZT.” The search fries his computer.

Brian helps out on the murder case more by helping them locate Taurus, the bomb-maker. He knew Rebecca and Boyle were looking for Taurus because when Brian’s on NZT, he can read lips. (This show is very focused on looking at mouths and the benefits therein.) Brian believes that a man named Darren Cullen is Taurus, and directs the agents to check out a garage that Cullen owns in Queens. The garage seems legit, until Rebecca goes full Mona Lisa Vito and realizes that there are no car parts for the Porsche supposedly being repaired. Inside the car’s hood she finds bomb parts. Seems like a pretty stupid place to hide bomb parts, but I’m not a bomb expert.

Cullen, who looks like a real wiener, pulls a totally wiener move and rolls over on the company that hired him to plant the bomb. He also adds a slight twist, letting the agents know that the bomb never detonated. Back to square one. The agents discover that the journalist died of a stroke, but that seems wrong because he was so young.

The conundrum proves so intriguing that Brian, once again, cannot stay cooped up in the file room. He breaks out again, this time leaving a note for his bodyguards that, I assume, he wrote in 2009 and was saving for just the right moment. 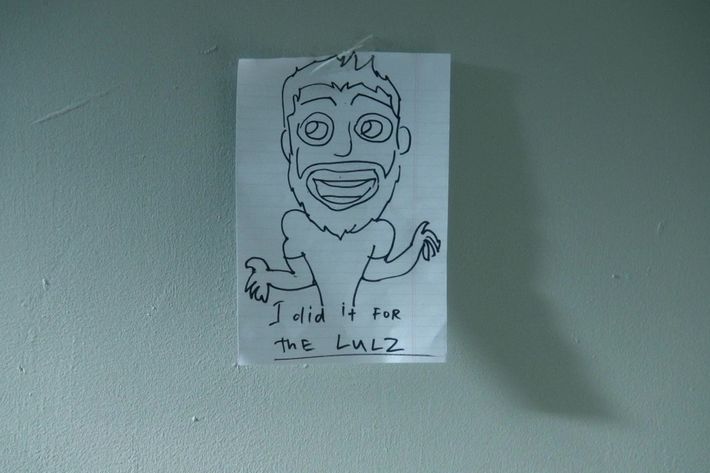 He doesn’t go headfirst through drywall again. Instead, he does this:

Brian heads around Manhattan again, solving crime, and this is where the episode goes off the dang rails. Brian finds out that two other young people had very rare strokes, and then determines that they were all descendants of Genghis Khan. All three stroke victims are tied to the same coffee shop. Brian believes that there is a virus specifically targeting the genetic marker of Genghis Khan descendants and killing those who possess it. Which, of course, is nutso bonkers to the nth degree.

It’s a bad theory. So bad, in fact, that Brian is getting fired by the chief. He is 100 percent fired. The most fired he has ever been. Except Rebecca checked out his theory, and there is actually a dude going to the coffee shop and spraying virus onto people’s coffee?? 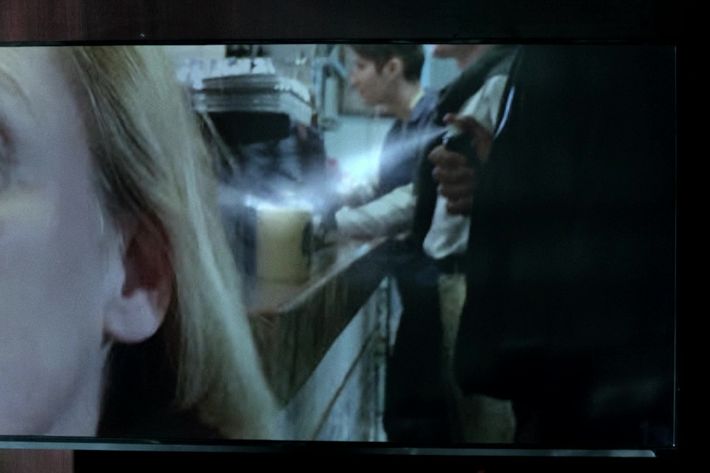 To be fair, this is still not the weirdest thing I’ve ever seen at a Brooklyn coffee shop. The team concludes that the virus java was meant for a mystery woman, who was intended to pass along the virus to a high-level military official at a hotel.

Back at family dinner, NZT Brian cranks it up to 11, absolutely destroying his family in Trivial Pursuit. (NZT uses, ranked: (2) Solving murders; (1) Winning Trivial Pursuit.) He also takes another stab at the Eddie Mora Googling, but it fries the computer again.

Rebecca and Brian head to a biotech lab that they suspect was spreading the virus. It turns out that the head of the company was the man spraying the cups, and Brian figures out that everybody who works at the lab hates him. Hated biotech/pharmaceutical executives are very “in” right now. Brian easily convinces the employees to roll over on their boss by emailing him the incriminating evidence. Case closed.

Brian caps off the episode by going to visit his dad. Right before he confesses everything, including the part about the secret pills that make him a MacArthur Genius grant nominee, his dad’s nurse shows up … and it’s the same nurse employed by Eddie Morra. Twist! Brian plays it exceedingly cool, though. 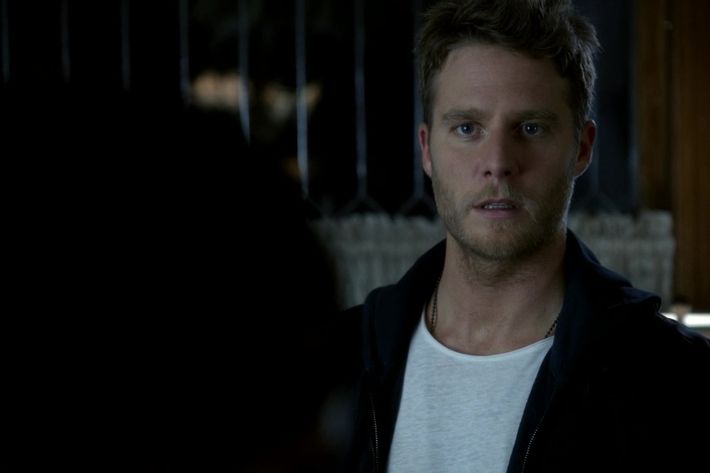 “As long as he keeps taking his pills, does everything we tell him to do, just the way we tell him to do it, I think he’ll make a full recovery,” she says, looking straight at Brian. It’s very subtle.

“There’s no reason at all to expect his health to be compromised.” Okay, pump the brakes. We get it. You are talking about Brian and not his dad now. To be clear: This nurse will not hesitate to kill. 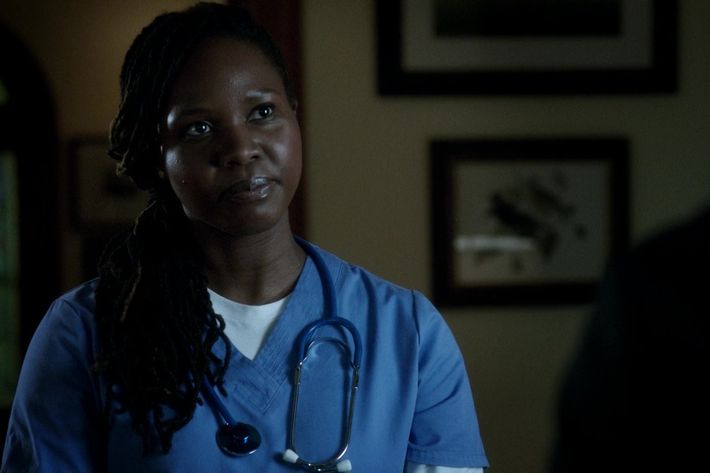 The dad is like, “Yeah, this is a normal nurse cadence. This is how nurses talk. Definitely not the speech of a shadow agent employed by Bradley Cooper.” And that’s where we leave Brian this week, having defeated a virus and being threatened by a nurse.

All in all, this was a pretty fun episode! But, it looks like we’ve reached the time limit on this of Limitless. Next week, more shots of people swallowing pills.

overnights 11 mins ago
1923 Recap: The Tedium of ‘the Tedium of Healing’ After a mid-season hiatus, it’s a bit lackluster to return to see the Duttons’ reinforcements heading to Yellowstone at a snail’s pace.
grammys 2023 17 mins ago
All the Best 2023 Grammys Red Carpet Looks  Lizzo, Doja Cat, and more make the whole place [*Taylor Swift voice*] shimmer!
gamer girls 6:28 p.m.
Keke Palmer Is Streaming the Sims on Twitch Now Content warning, she has installed Wicked Whims.
last night on late night 6:23 p.m.
SNL Exploits Pedro Pascal’s Daddy Era We all knew it was coming.
award hoarders 5:15 p.m.
EGOT Watch: Who Will Be Next to Complete the Awards-Show Grand Slam? All Trent Reznor needs is a Tony.
grammys 2023 5:01 p.m.
Viola Davis Read Her Way to an EGOT After winning a Grammy for Best Audio Book, Narration, and Storytelling Recording.
grammys 4:00 p.m.
Which Old Video-Game Score Would Have Won a Grammy? Predicting past winners for the Recording Academy’s new music-in-gaming category.
grammys 2023 3:50 p.m.
Here Are the 2023 Grammy Award Winners Beyoncé and Brandi Carlile have both already scored wins.
bowen fan club 3:35 p.m.
Bowen Yang Is a Deflated, Distraught Chinese Spy Balloon in SNL’s Cold Open “I entertain you people for four days, and then get shot by Biden? Can’t believe I’m Joe’s Osama.”
high-five 2:16 p.m.
Woody Harrelson Is Joining SNL’s Five-Timers Club This Month And Jack White will become a five-time musical guest.
overnights 1:47 p.m.
Saturday Night Live Recap: Pedro Pascal Left No Crumbs The first great Saturday Night Live episode of 2023 has arrived.
it's-a-me 11:47 a.m.
Pedro Pascal Stars in SNL’s Big-Budget Mario Kart Trailer Chris Pratt, we have your competition on the phone.
your honor Yesterday at 8:04 p.m.
Reese Witherspoon Hints at Elle Woods and Paulette Reunion for Legally Blonde 3 “There is no Legally Blonde 3 without Jennifer Coolidge.”
same Yesterday at 5:56 p.m.
Adele Is Going to the Super Bowl ‘Just for Rihanna’ Does she need a 1+?
grammys 2023 Yesterday at 2:40 p.m.
The Grammys 2023 Special Merit Awards Returns Tonight Nirvana, Ma Rainey, and Bobby McFerrin are some of the night’s honorees.
vulture lists Yesterday at 1:00 p.m.
Every Tom Hanks Movie Performance, Ranked Where do Elvis and A Man Called Otto fall in the Tom Hanks canon?
back in the press Yesterday at 9:44 a.m.
13 Takeaways From Armie Hammer’s First Interview Since His Scandal He admitted to being emotionally abusive to his accusers, but claimed that all his sexual encounters were consensual.
gladia2r Feb. 3, 2023
Normal Person Paul Mescal to Entertain Us in Gladiator 2 The Ridley Scott-directed sequel will release on November 22, 2024.
web of lies? Feb. 3, 2023
Of All the Broadway Musicals for George Santos to Claim… He reportedly lied about producing the notorious flop Spider-Man: Turn Off the Dark.
overnights Feb. 3, 2023
RuPaul’s Drag Race Recap: Golden Girl Groups The filler is gone, the competition is heating up, and the queens are fighting.
More Stories