When Miles Ahead, directed by and starring Don Cheadle, premieres at the New York Film Festival in October, it’ll mark the first time that the jazz genius Miles Davis has been the subject of a non-documentary film. It wasn’t a lack of interest that has kept Davis from movie theaters till now. Nor was it lack of material: Davis, who died in 1991, lived a dynamic and controversial life, both personally and musically. (Multiple biopics wound up in development hell.) Cheadle’s film focuses on a period when the trumpeter was living in seclusion, so here’s a broader overview of one of American music’s true giants.

1. What to Know About His Sound

“The thing that is special about his sound is economy when he was improvising. Before Miles, most people thought of the trumpet as a very extroverted instrument. Miles was more introverted in his approach. He used a Harmon mute — it wasn’t really popular before he started to use it — and it’s a very beautiful sound. I also think his minimal use of vibrato was a tremendous influence on instrumentalists. Recordings like ‘ ’Round Midnight,’ ‘Someday My Prince Will Come,’ ‘I Thought About You’ were ingenious. And one of the things that set Miles apart was his use of space, making the space a part of the music. Before Miles came on the scene in the 1940s, we had players who were more technically proficient, but he really didn’t have the technique at that time to play like a Dizzy Gillespie, so he wanted to go in a different direction. He developed in a way that suited his cool persona. When you listen to Miles, it feels like you get to know the person. You hear in the music: ‘This is who I am. Check it out.’ ”

1926: Born on May 26, in Alton, Illinois, to a homemaker mother and dental-surgeon father.

1943: While a student at East St. Louis Lincoln High School, begins performing in local bands, earning $75 to $80 a week.

1944: Hears Dizzy Gillespie and Charlie Parker perform, which he later calls the greatest moment of his life “with [his] clothes on.” Moves to New York to attend Juilliard.

1945: First recording date, with Herbie Fields for Savoy Records. Drops out of Juilliard. “If I stayed any longer,” he said, “I was going to have to play like a white man.”

1946: First uses Harmon mute on his trumpet in an effort to sound less like Gillespie.

1949: Travels to Paris, where he meets Juliette Greco. Leaves Paris and Greco, becoming depressed and beginning a heroin addiction.

1953-54: Kicks heroin, starts going to the gym and practicing boxing, which he’ll do for the rest of his life.

1957: Birth of the Cool is released and is considered the first “cool jazz” album.

1959: Records Kind of Blue, the definitive modal-jazz album. Beaten by a policeman outside Birdland. The event “made me bitter and cynical again …”

1963–64: Forms second Great Quintet, with whom Miles forges a new style based on “time, no changes,” emphasizing democratic interplay.

1970: Releases Bitches Brew, which ushers in jazz’s fusion era, during which musicians experiment with rock.

1975–80: Enters a period of seclusion in which he barely picks up his trumpet and struggles with drug use.

1981: Marries Tyson at Bill Cosby’s house on Thanksgiving. Releases The Man With the Horn, his first new album in six years.

1991: Dies at 65 as a result of pneumonia, respiratory failure, and a stroke in Santa Monica, California, on September 28.

Porgy and Bess (1959)
“I love that it was theatrical, but so hip. There are people that think it’s square music. I think it’s beautiful.”

Kind of Blue (1959)
“Instead of being vertical like bebop, here the modal musical landscape became horizontal.”

Bitches Brew (1970)
“This helped a lot of young people find their way to Miles’s earlier music — sort of a gateway.”

Circle in the Round (Compilation, 1979)
“He took the music he did with Herbie [Hancock] and Tony [Williams] and Wayne [Shorter] as far as it could go.”

We Want Miles (1982)
“The music felt aspirational, like it was reaching out for something, leaning forward.” 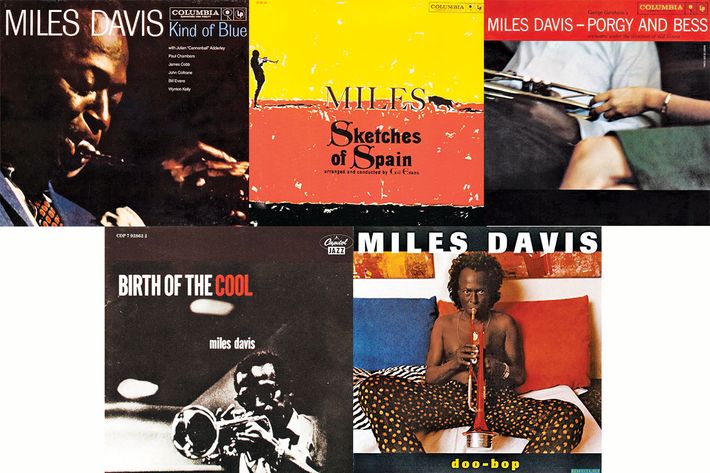 *According to Nielsen Soundscan.

5. Where to See Him Onscreen

Miami Vice (1985)
Davis guested on the hot-cop show as a bordello owner. “Playing a pimp was easy,” he recalled, “because there’s a little of that in every man.”

Scrooged (1988)
In this retelling of A Christmas Carol, which starred Bill Murray, Davis is glimpsed briefly as a street musician playing “We Three Kings.”

Dingo (1992)
Davis’s only feature-film role; he played a jazz trumpeter, Billy Cross, who takes an aspiring musician under his wing after the two meet in Australia.

And meant it in a bad way:
Steve Miller*

*“At the Fillmore East in 1970, I was opening up for this sorry-ass cat named Steve Miller … so I’m pissed because I got to open for this non-playing motherfucker just because he had one or two sorry-ass records out. So I would come late and he would have to go on first, and then when we got there, we just smoked the motherfucking place and everybody dug it!”

On his music: “I have to play the way I want to play, because that’s the only way I can feel like something, you know.”

On his albums: “I don’t keep any of my records. I can’t stand to hear them after I’ve made them.”

On Jazz: “Jazz is an Uncle Tom word. They should stop using that word … just [call it] music, man.”

Davis was aggressively outspoken about racism when few were, and his habit of performing with his back to the audience was seen as dismissive. His use of rock and funk rhythms and electric instrumentation led hidebound jazzbos to accuse him of selling out. But it’s the subject of women, though, where his legacy gets dark. Davis admitted to having “slapped the shit out of” his third wife, actress Cicely Tyson. His first wife, Frances Taylor, told the New York Times that she “actually left running for [her] life — more than once” during their marriage. In the late ’70s, Davis hospitalized a girlfriend with a punch to the jaw. He had issues outside of relationships, too, briefly turning to pimping in the ’50s to support a heroin habit.

*This article appears in the September 21, 2015 issue of New York Magazine.

grammys 2023 4 mins ago
The Grammys Pay Tribute to 50 Years of Hip-Hop Who performed? Who got censored?
overnights 26 mins ago
The Last of Us Recap: Kansas City, Here We Come If they’re going to survive Melanie Lynskey’s Kansas City, Joel will need to trust Ellie more.
grammys 2023 10:15 p.m.
Beyoncé Grants Grammys the Ability to Call Her Their Most Awarded Artist She officially beat Hungarian-British conductor Georg Solti.
grammys 2023 10:11 p.m.
Quavo Brought Takeoff’s Chain to the Grammys Tributes also came from Kacey Musgraves, Sheryl Crow, Bonnie Raitt, and Mick Fleetwood.
overnights 10:03 p.m.
Your Honor Recap: Gaslight, Gatekeep, Girlboss Sorry, but it’s impossible to take Rowan fighting off Lasher’s influence seriously when she’s dressed in a polyester flapper costume.
overnights 10:01 p.m.
All Creatures Great and Small Recap: Take the Biscuits, Edward Mrs. Hall and Tristan deserve better than this, but at least no cows died in this episode … that we know of.
chat room 9:50 p.m.
Jeffrey Pierce on His New Last of Us Role and Old Last of Us Themes “I think it’s interesting and powerful to force the audience to ask, Okay, who’s the villain here and who’s the good guy?”
grammys 2023 9:44 p.m.
Kim Petras Thanks SOPHIE After Historic Grammy Win “SOPHIE, my friend who passed away two years ago, who told me this would happen and always believed in me.”
overnights 9:17 p.m.
Your Honor Recap: Familiar Faces Your Honor continues to feel hollow as it slips further away from Michael’s agonized soul and toward being another crime drama.
grammys 2023 9:06 p.m.
All of Your Faves Are Dancing to Bad Bunny at the Grammys Taylor Swift’s awards-show dancing is back in 2023.
vulture homepage lede 9:03 p.m.
All the Best 2023 Grammys Red Carpet Looks  Lizzo, Doja Cat, and more make the whole place [*Taylor Swift voice*] shimmer!
trailer mix 9:01 p.m.
Jack Harlow Can’t Jump in the White Men Can’t Jump Trailer See him not jump on Hulu May 19.
grammys 2023 8:20 p.m.
Shania Twain Stole Harry Styles’s Outfit On the carpet for the 2023 Grammy Awards.
overnights 7:27 p.m.
1923 Recap: The Tedium of ‘the Tedium of Healing’ After a mid-season hiatus, it’s a bit lackluster to return to see the Duttons’ reinforcements heading to Yellowstone at a snail’s pace.
gamer girls 6:28 p.m.
Keke Palmer Is Streaming the Sims on Twitch Now Content warning, she has installed Wicked Whims.
last night on late night 6:23 p.m.
SNL Exploits Pedro Pascal’s Daddy Era We all knew it was coming.
award hoarders 5:15 p.m.
EGOT Watch: Who Will Be Next to Complete the Awards-Show Grand Slam? All Trent Reznor needs is a Tony.
grammys 2023 5:01 p.m.
Viola Davis Read Her Way to an EGOT After winning a Grammy for Best Audio Book, Narration, and Storytelling Recording.
grammys 4:00 p.m.
Which Old Video-Game Score Would Have Won a Grammy? Predicting past winners for the Recording Academy’s new music-in-gaming category.
bowen fan club 3:35 p.m.
Bowen Yang Is a Deflated, Distraught Chinese Spy Balloon in SNL’s Cold Open “I entertain you people for four days, and then get shot by Biden? Can’t believe I’m Joe’s Osama.”
More Stories