Unusual framing, for one.

When Tod Campbell joined Mr. Robot as director of photography on its second episode, he had what Marlo Stanfield from The Wire might refer to as “one of them good problems” in deciding how to shoot it. Lead actor Rami Malek’s eyes were almost too gorgeous. “My God, Rami? I could put a light a hundred yards away and his eyes would pick it up,” says the veteran cinematographer of shows from Friday Night Lights to Sleepy Hollow. This ocular casting coup helped determine how Campbell came to shape the distinctive look of creator Sam Esmail’s twisty, anti-capitalist hacker drama, one of the summer’s standout shows (its finale airs on USA tonight). And you don’t need Malek-size eyes to see that Mr. Robot composes its shots like nothing else on television today.

Fitting for a show about those occupying society’s technological substrata, Mr. Robot’s characters are often placed at the very bottom of the frame. This leaves massive amounts of headroom that suggests a great weight hanging over their heads, and echoes their isolation: When they’re talking right to each other, they seem alone. In more conventional filmmaking, conversations are cut with the characters looking at each other from opposite ends of the frame, leaving what’s known as “leading room” between their faces that helps convey the physical space they occupy. Mr. Robot inverses the norm by “shortsighting” the characters, positioning their faces at the edge of the frame closest toward the person to whom they’re speaking. 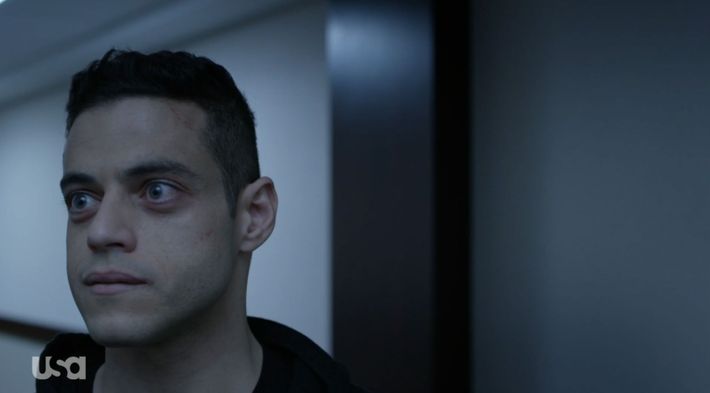 “Shortsighting is unnerving,” Campbell explains. “It further accentuates how fucked-up Elliot’s world is. The idea was to convey the loneliness. That’s the internal dialogue I had with myself: How do we tell that story? How do you get Elliot across?”

The effect goes a long way in selling audiences on the mounting paranoia and dissociation of the show’s main character, hacker Elliot Alderson (Malek). Without the usual pattern to help us intuit spatial relationships, these scenes create the sense that the characters don’t know where they stand in relation to one another. They also remind us of the picture-in-picture, face-against-flat-surface nature of video chatting, which can’t be overlooked on a show this attuned to the alienating effects of technology.

Mr. Robot Recap: I Have to Know What Happened
Mr. Robot Creator on His Plans for Season Two

According to Campbell, Malek’s eyes influenced his approach, right down to the lenses he selected. “We use Cooke S5s, which are more round than other lenses,” he says. “They really accentuate curves, and they help sculpt the face a little more. I chose those lenses because Rami’s eyes are so big, and so are a lot of the other characters’. Rami, Carly (Chaikin, Elliot’s fellow hacker Darlene), Portia (Doubleday, his co-worker and friend Angela) — all of the people we love have these big, giant, bulbous eyes. The one person who doesn’t is Tyrell (Wellick, the sinister young executive played by Martin Wallström); he’s got these deep-seated eyes. I asked Sam, ‘Did you do that on purpose?’ and he never really answered me.”

Shortsighting allowed Campbell to bring a wider lens in closer. “In close-ups of Elliot, everything else is so out of focus that it’s literally him floating in space,” he says. “You can really connect with those big, gorgeous eyes and get a sense that we’re present with him.”

And in a voice-over-heavy show like Mr. Robot, Campbell also had the challenge of visually complementing the show’s narration. “There’s so much internal dialogue for Elliot, so much voice-over that the other characters don’t get to hear. How do we visually maintain those moments where he’s got the internal dialogue and his therapist is sitting across from him and he’s not saying anything?” Campbell explains. “Ultimately, I go back to this isolation thing in his head and trying to be in there with him. With all that headroom that we use, I was trying to erase what’s around him, so that it’s just his head. Your eyes aren’t jumping to all the little bits and pieces of people crossing behind him, or all the other things that you might normally set up in the frame.”

Expanding this style to all of the characters, not just Elliot, was another key decision, one with real storytelling consequences. “We went further with it and used it all over the place,” Campbell says. “That speaks to the idea of Are things real, or are they not? So the idea was to keep it consistent throughout the piece and make people feel like the ground beneath them is undulating constantly. That’s the way Elliot himself feels. It never gives you a sense of really being righted.” 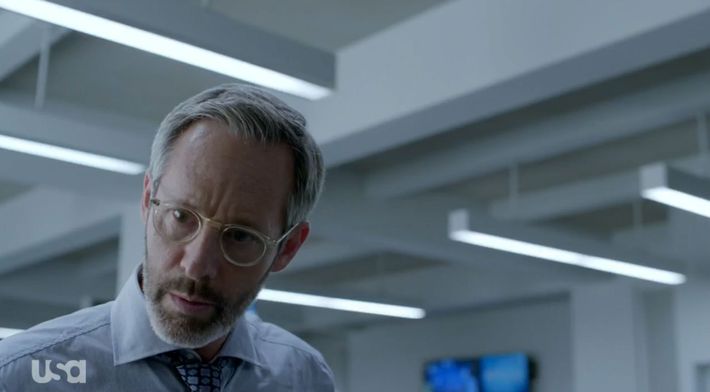 With the new pattern firmly in place, Campbell and Esmail could really make deviations count. “There were some moments where I really wanted to put Rami dead center [in the] frame, often in his therapist’s office. It’s a place where it kind of feels safe, but not really, because she’s really digging at him. We’d save putting him either on what you’d call the ‘correct’ side of the frame in a conversation or in the center, and really reserve those moments for something where we felt the subtext would be more profound.” 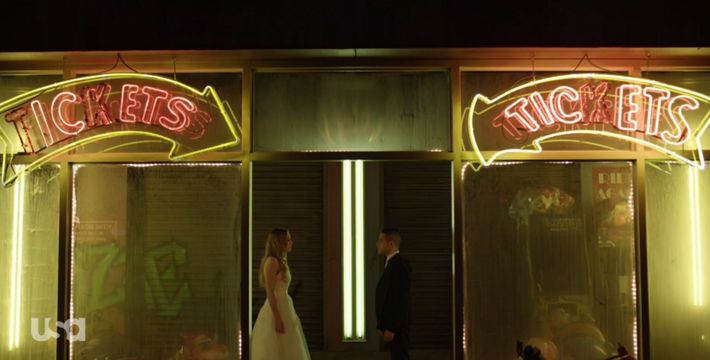 This carried over to the motion of the camera, which Campbell says he’d come to distrust from working on more traditionally shot shows, in which the camera was moved frequently to cut costs — and corners. “In television, it’s very difficult to block a scene where the camera doesn’t move much, so you have to concede a few things in there. But we came to a place where we really didn’t want to pan or tilt the camera. There were only two handheld shots in the whole show: One is in the dream sequence, and the other is with Elliot finding [his murdered girlfriend] Shayla in the trunk. We started out with zero handhelds, but we ultimately found ourselves wanting to set these certain moments apart from everything else.”

“We had a steadicam operator the whole time, but we only used it once, in the finale,” Campbell adds. “The Steadicam is really great for certain things, but in television, for a lot of directors, it’s their lazy way out of shooting a scene. ‘Put it on the Steadicam, walk and talk, blah blah blah.’ We never wanted to do walk-and-talk.”

It’s a heavy cocktail of unconventional approaches, so much so that when Campbell started out — taking over from Girls director of photography Tim Ives, who helped give the pilot serious New York City style — he was scared he’d lose his job over it. “Because USA was a new network for me, and their history is a different, brighter type of storytelling and photography, I was really nervous,” he says. “They ultimately became very supportive, of course.”

+Comments Leave a Comment
How Mr. Robot Got Its Strangely Striking Look

girl boss 10 mins ago
Uma Thurman Cast as a Girl Boss in Showtime’s ‘Super Pumped’ Gaslight, Gatekeep, Call an Uber
overnights 25 mins ago
Vanderpump Rules Recap: Breakdown at Tiffany Raquel’s family history is the new Katie Maloney falling through a skylight during a photo shoot — we must know everything.
penn b 9:37 p.m.
Cardi B And Penn Badgley Fangirl Over Each Other On Twitter Cardi B and Penny B collab coming soon!
hollywood connections 7:33 p.m.
Mama HAIM Taught Art to Paul Thomas Anderson, says Baby HAIM “I drink your milkshake” was actually a quote from the playground.
uba+ 6:20 p.m.
Katie Couric Calls Matt Lauer’s Behavior ‘Devastating But Also Disgusting’ The Morning Show, it turns out, is a documentary.
overnights 5:15 p.m.
I Know What You Did Last Summer Recap: She So Wishes She Was You The longer the show goes on, the messier it feels.
videology 3:17 p.m.
Willow and Avril Lavigne Are Pop-Punk Giants in the ‘G R O W’ Video With an appearance from fellow young punk KennyHoopla.
music videos 3:12 p.m.
Summer Walker and JT Pull Up With the ‘Ex for a Reason’ Video And they’re coming to you as women.
overnights 2:56 p.m.
Only Murders in the Building Season-Finale Recap: We Are All Tim Kono The finale ties up enough loose ends to satisfy but holds on to some unfinished business to keep the story going.
rock star & the mole woman 2:40 p.m.
A Timeline of Roman and Gerri’s Succession Sexual Tension For all you disgusting little slime puppies.
switched on pop 1:59 p.m.
The Escapist Male Fantasy of the James Bond Theme Song  Exploring the superspy’s musical underpinnings as the Daniel Craig era draws to a close.
dunes 1:51 p.m.
What Do You Need to Know About Dune Before You Watch Dune? It’s about dunes.
the industry 1:22 p.m.
How Will Netflix Clean Up Its Latest Mess? The earnings call is today, the walkout is tomorrow, and the internal strife is not going away.
a long talk 1:12 p.m.
Sera Gamble Is Comfortable Inside Joe Goldberg’s Head You’s showrunner gives the lowdown on the low-down stalker we can’t stop watching.
By Valentina Valentini
vulture recommends 12:44 p.m.
Make Brand New Cherry Flavor Your Next Netflix Horror Binge Dropped in August, the series is perfect for spooky season.
trailer mix 12:35 p.m.
Catherine Comes for Her Crown in The Great’s Season-Two Trailer And doesn’t pass up any opportunity to insult Peter.
the view from outside 11:05 a.m.
Meghan McCain Felt ‘Slapped’ When Joy Behar Said She Didn’t Miss Her on The View And she “no longer felt safe working at The View” afterward.
wig! 10:19 a.m.
Nicole Kidman Is All Wig and No Mug in the Being the Ricardos Teaser Aaron Sorkin gives us Studio Desilu on the Sunset Strip.
book excerpt 9:00 a.m.
‘You Don’t Understand What This Is Doing to Me’ In the age of anti-heroes Tony Soprano reigned supreme. In his new book James Andrew Miller explores the toll the character took on James Gandolfini.
tv 2:32 a.m.
Well, Mel Gibson Is Starring in the John Wick Prequel The Continental The origin story will be a three-night TV event for Starz.
More Stories