Today is Force Friday, the day that all the new toys from the upcoming Star Wars: The Force Awakens hit the market; if your social-media timeline is anything like mine, it’s been eye-opening. Suddenly, your buttoned-up friend from work is Instagramming his brand-new C3P0, your 50-year-old neighbor is bragging that he threw down hundreds of dollars on action figures, and that magenta-haired geek you follow on Twitter is showing off the Star Wars display wall that dominates her bedroom. It’s been an overwhelming outpouring of Star Wars fandom, and at times, it’s led me to furrow my brow, barely able to keep from commenting under these excited pictures, “Aren’t you a little too old for this?”

And then my BB-8 toy arrived this morning, and I freaked out.

For those of you who haven’t yet made his spherical acquaintance, BB-8 is a new droid who makes his debut in The Force Awakens. He’s a tiny little thing that’s shaped like a soccer ball with a magnetized head on top that’s meant to spin around, help the ball-body keep its bearing, and look so cute that you’ll want to punch a unicorn. BB-8 has already charmed the internet with his roly-poly cameos in both Force Awakens trailers, and after director J.J. Abrams trotted out the droid a few months ago at Star Wars Celebration, even a casual fan of the franchise like me has been using GIFs of the expressive little guy in just about every situation. (After all, it’s a lot more fun to slide into someone’s DMs when you’ve got a GIF of BB-8 sliding, too.)

This little droid is basically the R2D2 for a new generation, except, as I have previously noted, BB-8 is so freaking cute that he makes rusty old R2D2 look like a passed-out Danny DeVito covered in burrs. BB-8 is so cute, in fact, that when he and his human friends finally face off against the evil Kylo Ren in Force Awakens, I’ll have to suspend all my disbelief if Kylo Ren doesn’t immediately scoop him up and coo, “Awww, how does his little head work?” That’s how cute, people.

Suffice it to say, then, that when Sphero’s $150 BB-8 toy arrived at Vulture HQ, my colleagues immediately shipped it straight to me. They knew that my obsession with BB-8 was so great that when the little droid did not roll out onto the stage during the Star Wars panel at Comic-Con — a panel that included just about every human cast member, mind you — I leapt to my feet at the end, waved a fist in the air, and angrily shouted, “Justice for BB-8!” All I had wanted from that panel was to see, pet, and perhaps even kidnap the robot that had so captured my imagination! Was that really too much to ask?

Now, with Sphero’s $150 BB-8 toy, my weirdo fantasy has finally come true. This little guy isn’t quite as big as the BB-8 they used in the movie — he’s more tennis ball than soccer ball — but size hardly matters when you’re able to hold a future Best Supporting Actor nominee in the palm of your own hand. “This IS the droid you’re looking for,” it says on BB-8’s manual. Sphero, you know me so well.

What can he do? A lot, but first you’ll have to plug him in and charge him. Well, that’s not exactly true: In order to preserve BB-8’s smooth spherical surface, there aren’t any plug-in ports on the little guy; instead, you plop him on a plugged-in charging plate, which causes BB-8 to immediately light up and move his sentient little head around to catch a glimpse of his new owner.

Reader, I screamed so loud that you would have thought I was a preteen with Harry Styles on my charging plate. This was too adorable, too fast. Could I even handle BB-8 once he was ready to roll?

The answer, amusingly, was not quite. Turns out, BB-8 isn’t the easiest droid to handle, at first: You control him via a cleverly designed app, but steering him can be a calamitous exercise. The little guy moves so freaking fast that you’re liable to send him careening straight into a wall at top speed, and if his little head pops off — and trust me, it will — you’re suddenly screaming like a preteen who just decapitated Harry Styles. It’s easy to pop the magnetized head back on, but I won’t lie: It is legit horrifying the first time you watch BB-8’s ball-body flee the crime scene without his tiny robot head. It’s like he just got away with something, and it is unseemly.

Eventually, you’ll get the hang of BB-8’s tricky controls, but you can switch him to an autonomous mode, too, where he’ll skid around your room of his own volition. Here, BB-8 resembles nothing so much as a demented, drunk Roomba as he rolls around your house bumping into furniture and attempting to course-correct, his little head lolling back and forth. I found myself instinctively yelping, “Little one, are you okay?” — you know, like most 36-year-olds do with their robots — and fortunately, BB-8 responds to a few voice commands that will help keep him out of trouble or bring his skidding to a stop.

I’m told that he can even learn the layout of a room over time, though I haven’t really gotten the chance to try that feature out because my 4-month-old puppy, Yoshi, went leaping for the droid like an asteroid monster trying to gobble up the Millennium Falcon. Vanity Fair recently posted a cute video where BB-8 rolls circles around a few mostly befuddled puppies; and while watching it, I thought to myself, “Hmmm, it seems weird that none of them are trying to put the robot in their mouths, but maybe they’re just that charmed by him.”

Nope. Turns out, a dog will want to put BB-8 in its mouth. Yoshi and BB-8 had not known each other for more than five seconds before Yoshi had snatched BB-8’s head from its body and sped away, victorious. If you’re hoping that a robot and a dog can finally co-exist, rest assured that science still has a ways to go on that one. 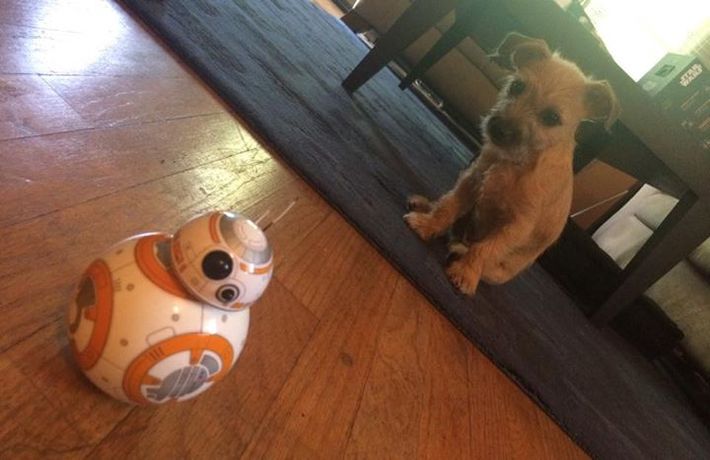 Maybe Yoshi was just threatened by BB-8’s overwhelming cuteness. This little guy is exactly as adorable as you want him to be, and that half-moon head proves so evocative that even a sly tilt or a double take is immediately winning. Much has been made about how The Force Awakens will eschew the CG saturation of the Star Wars prequels and return to the mostly practical effects of the original trilogy, and when you’re watching BB-8, you understand why that approach is so appealing. This little ball-droid is limited in what he can do — much more limited, say, than a wholly computer-generated creature with an expressive, humanoid face — but that’s exactly what inspires you to use your imagination every time BB-8 careens in a new direction or putters around a table leg. You engage with BB-8, you project a personality onto him, and in so doing, you imbue this little ball with a soul.

Maybe that’s why BB-8 stands apart from the toy-buying frenzy of Force Friday, where it seems like adults are coming out of the woodwork to drop money on a fleet of new toys they’re not likely to ever play with. BB-8 is designed to scoot on your floor, not sit on your shelf, and while I still thought, “Aren’t you too old for this?” while playing with him, it was because I thought I’d gotten too old to yelp and laugh and giggle and gasp like that. BB-8 made me feel like a kid again. Hopefully, the movie can do the same.