On Monday night, I arrived at what turned out to be incredibly early for a screening of The Walk. After about an hour of sitting in a corner and staring at my phone, I finally made my way into a seat at the front of the theater, where I was greeted with an IMAX-size projection of the movie’s poster. With no one to talk to, and my phone’s battery rapidly depleting, I began gazing at this image like a lifeline. I was not just a lonely man conspicuously underdressed for an event also attended by Robert Zemeckis and Daniel Libeskind; I was a lonely man who was also very interested in New York City geography, and for some reason, I found it very hard to get my bearings. Take a look for yourself: 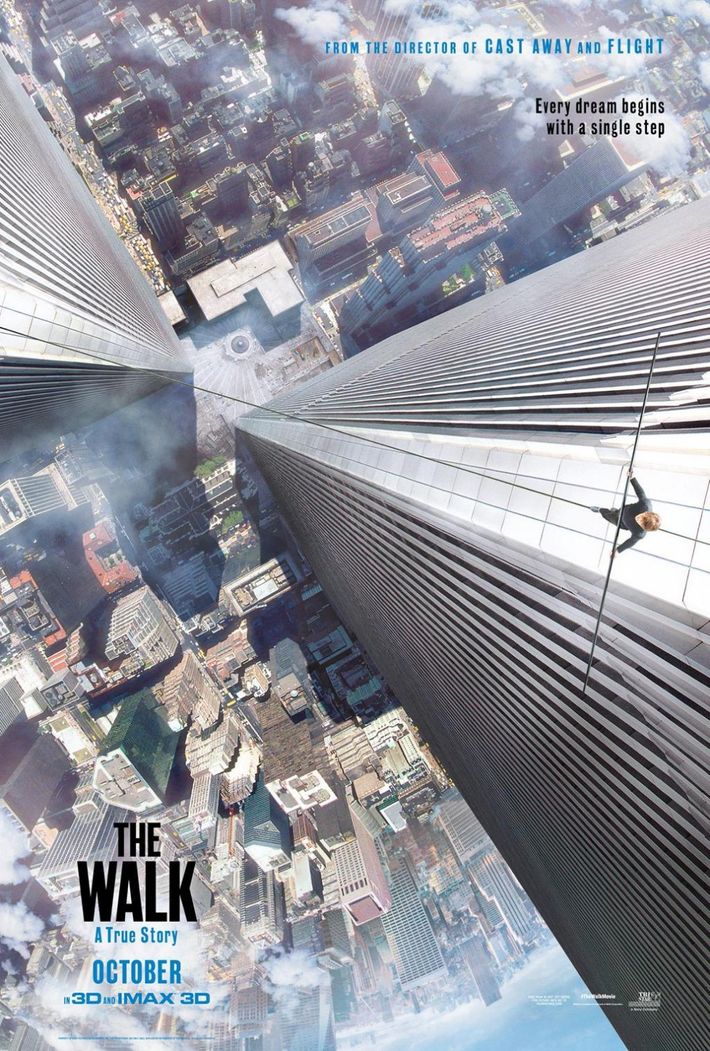 Which way is north? Ordinarily, the Hudson River would be an easy guide — the World Trade Center site is only a few blocks away — except, for some reason, there’s no river in the poster. No West Side Highway either. If you look closely, you can see a church right by the base of the towers, but it doesn’t really look like St. Paul’s Chapel or Trinity Church. Hey, look, next to that church is a familiar building: the New York Palace Hotel, instantly recognizable to any viewer of Gossip Girl. But that’s on Madison Avenue, making the church St. Patrick’s Cathedral. And doesn’t the street grid itself seem very midtown to you, with none of the Financial District’s narrow, twisting lanes? And wow, now that you mention it, isn’t that 30 Rock, right by the towers’ base?

Yes, that’s right: As others noticed before us, the World Trade Center on this poster is not at its rightful location downtown, nor is it in some sort of archetypal “New York streetscape.” Instead, it’s been digitally inserted at a very real intersection — 50th Street and Fifth Avenue, four miles from the actual World Trade Center site.

How did this happen? It’s probably not ignorance. As you can see from The Walk’s press stills, the World Trade Center is in the correct location in the film itself. The Hudson River, the West Side Highway, even New Jersey — in the movie, it’s all where it should be.

So what’s going on with the poster? Was there some graphic-design reason that the towers’ real location was unsuitable? We couldn’t for the life of us figure out what that would be, so we reached out to Sony Pictures for an explanation. Their comment: “The movie is a love letter to the Twin Towers and to New York City in all of its brilliance. This early teaser image represents an artistic composition, as all posters do.” There you go!

+Comments Leave a Comment
Why Does The Walk’s Poster Put WTC in Midtown?

movie review 14 mins ago
The Abysmal Wrath of Man Proves Guy Ritchie Is His Own Worst Enemy How do you mess up a Jason Statham revenge thriller?
oscars 2022 28 mins ago
These Are the Movies the Academy Is Counting On to Save the Oscars Thanks to the disruption that marred this year’s ceremony, the 2022 Oscars race should feature twice as many big studio movies as usual.
By Nate Jones
best of 2021 1:00 p.m.
The Best Podcasts of 2021 (So Far) After a year of catastrophe, the podcast universe seems to finally be getting back to normal.
vulture recommends 12:38 p.m.
MTV’s Downtown Is a Hyperspecific Time Capsule Downtown was for Chris Prynoski what Slacker was for Richard Linklater.
my single is dropping 12:22 p.m.
Pink Passes On Her Wisdom in New Video ‘All I Know So Far’ Featuring a cameo from God (Cher) herself.
tv review 12:19 p.m.
Mythic Quest Returns, Imperfect But Easy to Love Season two of the Apple TV+ comedy sets a high creative bar for itself, and even when it doesn’t quite clear it, it’s fun just to watch the attempt.
my single is dropping 12:17 p.m.
Isaiah Rashad Returns Ready to Party With ‘Lay Wit Ya’ Along with details on his long-awaited sophomore album, The House Is Burning.
my single is dropping 12:04 p.m.
J. Cole Gives a Taste of The Off-Season on ‘i n t e r l u d e’ The full album is out next week.
roll clip! 11:48 a.m.
The Calzones Betrayed This Jeopardy! Contestant Don’t tell Ben Wyatt.
overnights 11:31 a.m.
The Challenge: All Stars Recap: Scaredy Kat It’s exciting going into the Arena truly having no idea what the outcome will be.
the circle 11:30 a.m.
Will Chloe and Mitchell From The Circle Just Start Dating Already? For crying out loud, this is getting ridiculous.
renewals 11:10 a.m.
Sanditon Renewed for Two More Seasons, Proving That Love Can Win After All Alas, Theo James won’t be there.
vulture lists 10:40 a.m.
Every Major Grey’s Anatomy Character Return, Ranked From a sweet, shaggy dog to McDreamy on a beach.
#metoo 10:14 a.m.
Noel Clarke Accused of Sexually Harassing Women on Doctor Who Set Multiple women allege harassment and inappropriate touching.
reopening 10:08 a.m.
Chicago to Rouge Knees, Roll Stockings Down, Return to Broadway on September 14 And all that jazz!
alexa play "chasing cars" 9:59 a.m.
Jesse Williams to Exit Grey’s Anatomy After 12 Years How much more trauma will this season bring?
overnights 9:22 a.m.
Grey’s Anatomy Recap: Endgame This is shaping up to be the sweetest of goodbyes.
tv review 9:21 a.m.
Shrill Doesn’t Need Closure The low-key yet insightful closing episodes of the Hulu comedy eschew resolution in favor of continued evolution.
movie review 9:00 a.m.
Fear Not, Here Today Is Not a Billy Crystal-Tiffany Haddish Romantic Comedy But you get the feeling that Crystal kind of wanted it to be?
overnights 8:00 a.m.
Mythic Quest Recap: Maybe It’s the Estrogen Poppy and public speaking just don’t go together — or perhaps they do.
More Stories