At the end of the ’80s, Batman fans killed Robin. Jason Todd, who replaced the now-grown-up Dick Grayson and became the second Robin, received an ireful response from readers, who abhorred Todd’s ersatz aesthetics and personality. Dennis O’Neil came up with the idea of allowing readers to influence the character’s fate, and a 900-number was set-up. Readers phoned in and voted on whether Todd should live or die. Ultimately, they voted thumbs down by a slim margin of less than 100 votes. Written by Jim Starlin and drawn by the great Jim Aparo (with an iconic cover by Mike Mignola), the arc “A Death in the Family” remains one of the most famous plotlines in Batman’s vast mythos, as the death of Jason Todd haunted Bruce Wayne profoundly. You can read about the story of how fans came to kill Jason Todd in a new online comic by Tony Wolf and Sirgryphon called “1-800-Dead-Robin.” The comic takes a personal yet analytical approach, akin to Scott McCloud’s work. You can read it here, via Bleeding Cool. 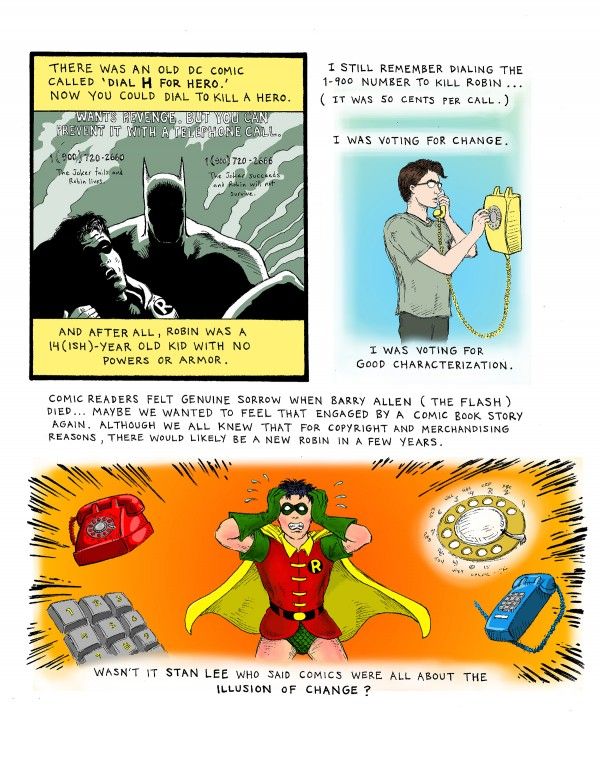 +Comments Leave a Comment
Why Would You Vote to Kill Batman’s Sidekick?