An early sketch of the Countess’s bedroom, by Mark Worthington.

The hotel at the center of American Horror Story: Hotel has yet to reveal all of its mysteries to us — just last week, we learned about yet another killing device in this “murder palace” when Evan Peters’s character asks, “Are you familiar with my black closet?” (Here’s a tip: Don’t back into strange spaces.) Even the blueprints don’t make sense — they don’t account for the secret rooms, or doors that lead nowhere. But there is a method to the madness, according to those who actually designed the fictional Cortez. Production designer Mark Worthington, who’s been with the American Horror Story franchise since season one, gave us the schematics on the best rooms at the Hotel Cortez — along with some of his early sketches — and what you might have missed without freeze-framing particular scenes. Let’s take a tour, shall we? 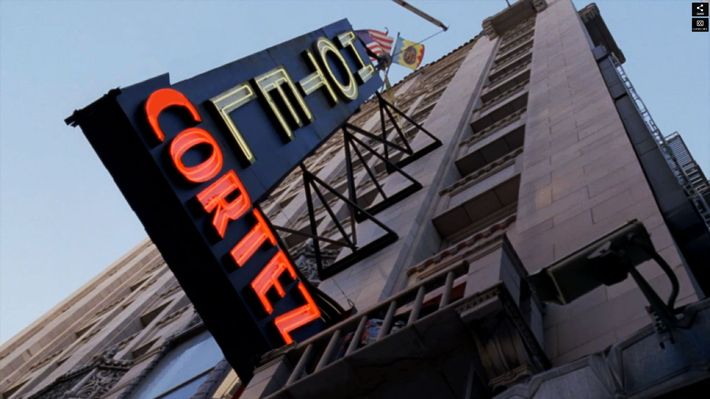 What visitors to the Cortez see before they enter the premises is actually a historical Art Deco building in downtown Los Angeles, the Oviatt Building. At the beginning of every AHS season, showrunner Ryan Murphy calls Worthington and describes the major plot points, and usually, he has some visual imagery he’s inspired by. This season, Murphy told him, “This is based on an old hotel that’s down on its luck. It had its heyday in the ‘20s and now has fallen on hard times.” They started thinking about the Cecil and the Alexandria, hotels in Los Angeles that were rumored to be cursed or haunted. It occurred to Worthington that Art Deco would be an interesting style choice, since it was both a hot style in the ‘20s and also a “strange style, disquieting, creepy in a way.” The Oviatt fit the bill.

Walk inside, “and there’s tension, isn’t there?” Worthington asked. Yes, it’s beautiful and glamorous, but there should be a few things that set you on edge, even on an unconscious level. Murphy and Worthington debated whether the lobby space should be decrepit and rundown, or if it should look like it had undergone a horrible remodeling job attempted in a later decade that left only remnants of the original Deco designs. They ultimately decided on a more timeless look. “It’s a space out of time,” Worthington explained. “It’s still pretty intact, but you feel like you’re walking back in time.” The furniture (upholstered in the show’s color palette) is Depression-era. The light fixtures and chandeliers, although custom-made recently for the purposes of the show, are in a Deco design. 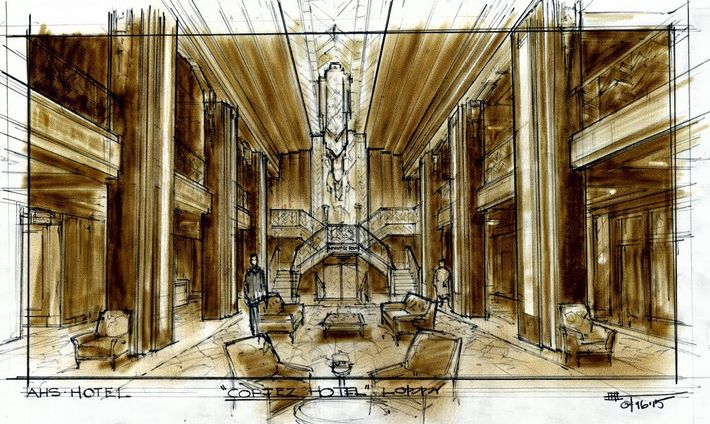 Look closely for a few intricate designs that may escape your notice. Take the ironwork tribute to the hotel’s namesake, conquistador Hernán Cortés, whom you can see in the grill in front of the elevator. “The sun is rising above his head, and the rays go across the ceiling,” Worthington noted. On the other side, there is a separate figure, of Cortés’s Aztec consort, known as La Malinche, “who basically betrayed the Aztecs to Cortés so he could take over the city, take over Aztec culture.” Instead of the sun, she gets the rays of the moon, “so there’s a sense of completeness.” The panels next to the elevator shaft feature Aztec temples with a little reference to what often happened there. “The Aztecs were a brutal culture, and they would do these sacrifices,” Worthington said, “one of which involved plunging a knife into the victim’s chest, cutting out the heart, and holding it up while it was still beating.” After he mentioned that detail to Rob Bernard, AHS’s graphic artist, they added a figure of a man holding up a human heart at the top of the temple. “You might not ever see it on camera, but it’s there,” he said.

The columns in the lobby have a foliate design, where the capital of the column is a Venus flytrap. “Obviously, that’s a reference to Lady Gaga’s character,” Worthington said. “It immediately shifts the psychology of the place, and makes it both more inviting initially, and then oddly threatening,” Worthington said. “It’s never explained, and it won’t be.”

Or, as Ryan Murphy likes to call it, “the sex room.” (Behind the scenes, the lobby and the penthouse are next door to each other on the same stage — no elevator required.) Gaga’s character, the Countess, retains a Deco design in her living area and bedroom, but adds a contemporary touch “because we didn’t want it to be stuck in time. She’s not stuck in time, the way the hotel is. It’s got a fresher feel than the lobby.” 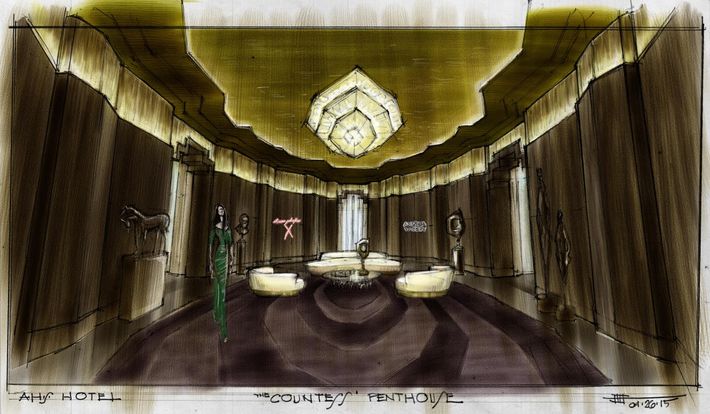 Since the character is a collector and a connoisseur of art, Worthington wondered at first how much art should be on display. Murphy told him, “I just want a few key pieces. Very stark, very simple.” The Countess isn’t sentimental, and her space needed to reflect that. Some of the art pieces are mirrored, curved sculptures by Arik Levy — RockStone, Solid Liquid — and some are meant to evoke the work of other artists. The neon pieces, for example, are an homage to Tracey Emin’s work. Along with the mirrored art, they help brighten up the space, but also indirectly connect with aspects of the story. “It’s about levels of tension and ambiguity,” Worthington said. 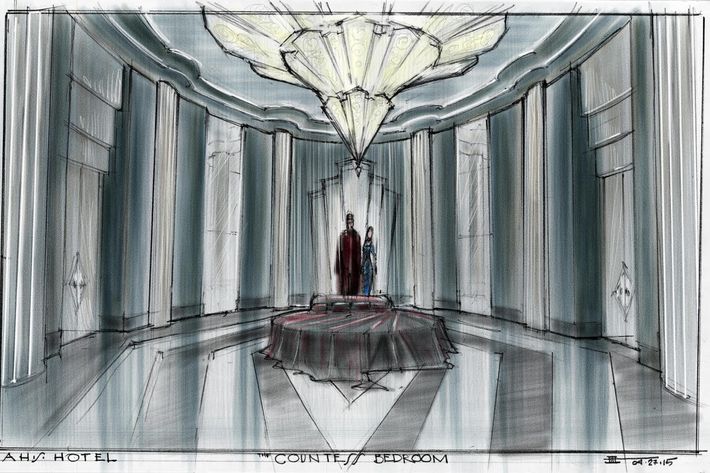 The heart and soul of the “sex room” is the bed. Most of the spaces in the hotel are squares or rectangles, but when it comes to the Countess, they went more oval — and that meant a round bed. “We couldn’t buy that!” Worthington laughed. “Not in a Deco design.” The bed had to be drawn, designed, and made from scratch. Same with the light fixtures. Everything in her room is custom-made because there is a limited supply of Deco light fixtures available, “and anything of quality is very expensive to buy or rent. It’s cheaper to make it.”

Our recapper calls it Lady Gaga’s Tetris Room of Death, but officially, it’s known as the Nursery. “Ryan came on set the other day, and he turned around with a huge smile on his face and said, ‘Isn’t this the best set you’ve ever designed for me? This is so cute!’ He was literally like a kid in a candy shop.” The Nursery is meant to be a cross between Willy Wonka and A Clockwork Orange, where seemingly innocent activities take on a sinister edge. You walk down doorless hallway and have to push on a wall to enter the room, which is tonally different from the rest of the Cortez. “Everything else in the hotel is darker and warmer — red, green, black,” Worthington said. “And then you come into a starkly different world, because of the kids and the purpose of the kids, which makes it more creepy than if the space were dark.”

Originally, the description of the space was just that it was a bunch of kids playing vintage video games on big screens. Instead, Worthington decided to turn the monitors vertically and embed them into the architecture of the room “so you’re not even really seeing them as TV screens at first. They’re more than TVs, in a way.” As a viewer, you’re left to wonder why the kids are given candy to eat and video games to play — are they being placated? Is it to affect the taste of their blood? “The whole thing is far more horrific, far more diabolical when you see the purpose, that it’s a room to harvest children’s blood,” Worthington said. And because they’re the Countess’s lifeblood, so to speak, she’s somewhat emotionally attached to these children, “as much as she can be.” She has an interest in keeping them happy and keeping them occupied. “It’s like cultivating goose for foie gras, except they’re kept alive the whole time.” 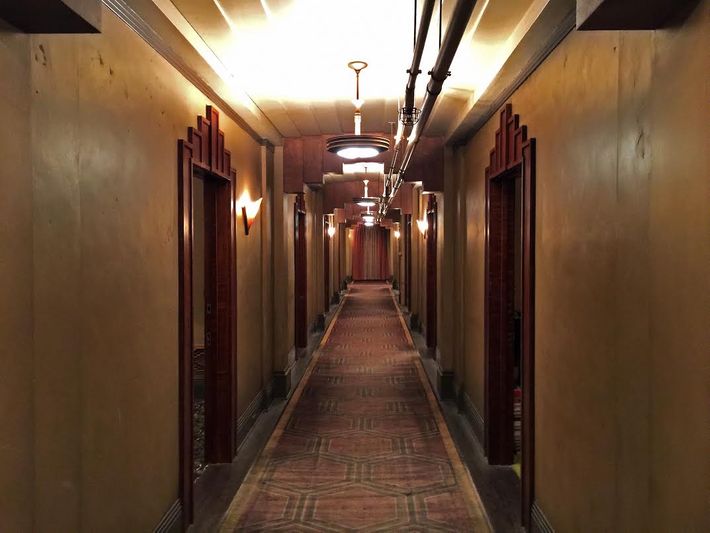 How did they shoot the scenes of people running down the Cortez’s endless hallways? Simple: They built a hallway in the shape of a rectangle, so it’s continuous. “It’s almost a circle, but it’s a rectangle,” Worthington explained. “You can just keep going around and around. It’s useful to create the sense that it goes on forever.” If they want to create a dead end, they put a wall in. But having so many trick doors, secret rooms, and endless loops can be confusing, even for the crew on American Horror Story. “Every time Ryan comes on set, he goes, ‘Where’s the exit? How do I get out?’” Worthington laughed. “And then I tell him, ‘Okay, go down to this door here, and that will take you to the office.’ It’s confusing, but it’s meant to be!”

For more history on the Cecil Hotel, which contributed to the conception of the Cortez, check out this story by our friends at the Frame.