Major spoilers ahead for last night’s episode of The Walking Dead.

Whew. There’s a lot to recap on last night’s episode of The Walking Dead, but there’s only one thing to talk about: Glenn. Last night, it appeared the show killed off one of the last original members from the season-one crew, feeding him to the encroaching zombie horde. The foreshadowing was there from the beginning. The show opened on Glenn, which was an ominous sign, sort of like finally giving the backstory to a reality-TV contestant. He took a heavy look at Hershel’s watch — that symbol of love and legacy — and he decided that, yes, he would undertake a foolhardy mission to burn down the feed store instead of running back to Alexandria. But his dumbest, and ultimately fatal, decision may have been the one where he lets Nicholas, the coward who almost killed him multiple times, come along with him.

They find that the feed store has already burnt to a crisp, and following Nicholas’s bad instincts, they end up in a dead end, with walkers surrounding them on both sides. The final shot is an overhead shot of zombies chowing down on viscera. But is Glenn really dead? There’s some reason for some wishful thinking.

On The Talking Dead, the show’s post-mortem hosted by Chris Hardwick, the show has an “In Memoriam” segment where they recap all of the deaths. They showed the various Alexandrians, the walkers, and of course Nicholas, but instead of showing Glenn, they had this: 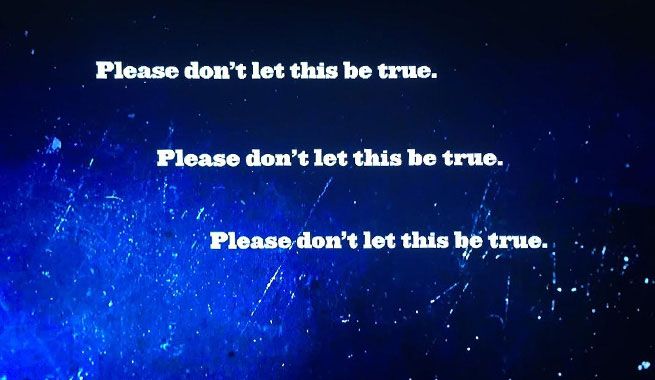 Is this just some expert trolling? Hardwick read the following statement from showrunner Scott Gimple:

Dear fans of The Walking Dead, this is a hard story to tell, and when we were planning to tell it, we knew our friends over at Talking Dead would be talking to you about it, and knowing you’d talking and feeling and commiserating, I knew we should say something about it, lest our silence say something we didn’t mean to say or not say so I will say this. In some way, we will see Glenn, some version of Glenn or parts of Glenn again, either in flashback, or current story, to help complete the story.

You guys are sick: “Parts of Glenn.”

All right, so there’s the possibility we might get sepia-soaked flashbacks of Glenn or zombie Glenn. But is it possible that Glenn might actually be alive? We’ve obsessively replayed the tape over and over again like we were watching a sporting event. Let’s review what happened:

Glenn and Nicholas find themselves at a dead end, with walkers on both sides, so they get up onto a Dumpster with walkers grabbing at their feet. Nicholas is very clearly losing it. I mean, just look at this zombie:

He does not handle this very well.

Glenn, champ that he is, tries to tell him to get it together.

Nope. Nicholas shoots himself in the head instead.

Now, here’s the important part. You’ll see that as they are doing their trust fall into the zombie horde, Nicholas is on top of Glenn.

After all, very basic anatomy should tell us that the viscera is located below the diaphragm.

That said, even with the zombies eating Nicholas first, is there any way that Glenn gets out of this?

Glenn is resourceful and has escaped a number of times. (We know this is of little consequence, but it’s definitely not how he goes in the comics.) So what do you think? Is there any way that Glenn Rhee, pizza delivery boy extraordinaire, gets out of this alive? Is The Walking Dead pulling a Jon Snow? Will Maggie just tow around zombie Glenn on a leash? Let’s commiserate in the comments.

+Comments Leave a Comment
Glenn on The Walking Dead: What Happened?