Why Is This Night Different?
Season 5 Episode 4
Editor’s Rating 5 stars *****

All great romances start differently. In the movies, they often begin with bumped shoulders and dropped paperwork, leading to sexually charged banter and a breathless sprint up to a skyscraper rooftop. In real life, great romances can start with a sext during a wine-cooler blackout. But on Homeland, a great romance will start with a contract killing, a flesh wound, and a sleeper hold … That is, if you believe that Carrie and Quinn are officially THE most important will-they-or-won’t-they romantic relationship on television. Which, if you have a beating heart, you DO. 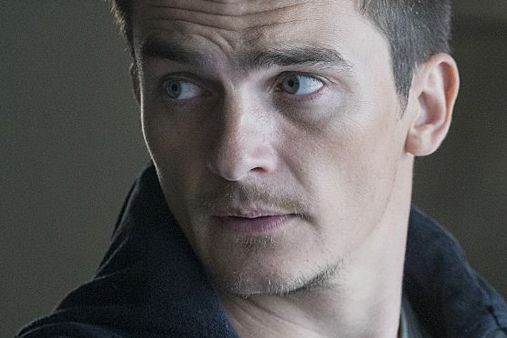 Friends, if you guessed that Quinn would probably not murder Carrie this week on Homeland, you were right! How did you guess? Was it the fact that Carrie is the star of the show? But one of Quinn’s most alluring charms has always been his inscrutability, so as much as we knew he’s a good guy deep down, he’s also scarily loyal to his bosses. When Carrie awoke from her stranglehold tied to a rusty cot, we were as frazzled as she was when Quinn demanded to know what she’d done to earn a contact killing. Fortunately, he proceeded to untie her and (after slicing his own palm!) bloody her face to stage a “confirmed kill” photo. The relief that Quinn remains Team Carrie was then quickly overcome by the thrill of watching him put all his talents into helping her stage her own death. But, Carrie being Carrie, she couldn’t simply record a good-bye video to Franny and then go off the grid for the rest of her life; she needed ANSWERS. 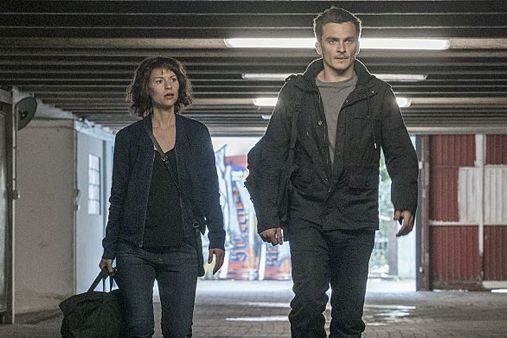 Carrie’s quest to discover WHO had targeted her led to an entire episode of good old-fashioned spy games, the likes of which Homeland rarely immerses itself in. We’re talking disguises (involving a truly hilarious wig), surveillance, subterfuge, and, ultimately, a shoot-out! Quinn, too, wanted to know whether Saul had been behind this scheme, but after staging a drop at the local post office, he found himself on the wrong end of a loose-end clean-up. In other words, upon killing Carrie, Quinn himself was set to be taken out. Fortunately, Carrie (who by now was completely balanced, thanks to those pills she’d gobbled a few hours earlier) spotted the approaching assassin, crashed into his Beemer, and helped spirit Quinn to safety, but not without Quinn taking a bullet to the side. Ultimately, his gunshot wound wasn’t fatal, unless we’re talking in terms of our heart feelings, because the next scene had Quinn collapsing helplessly into Carrie’s arms as she tended to his wound. See what I’m saying about great romances? This show. 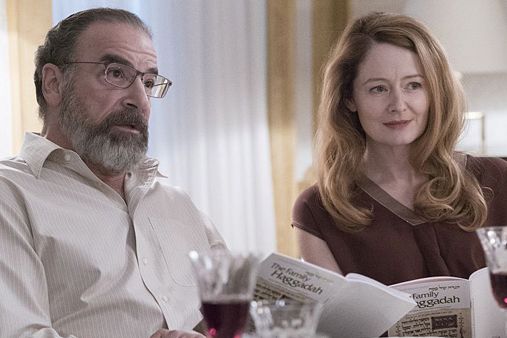 The big reveal, however, was the identity of the person who’d tried to have Carrie (and Quinn) killed: Allison. Dastardly Allison. I think it’s safe to assume we have now met the season’s big bad? In previous episodes, we saw Allison scheme her way out of taking the fall for the CIA data breach (possibly by also having schemed her way into Saul’s heart), but this was the first episode when we really got to see her in action. As part of a larger CIA plot to incur regime change in Syria, she and Saul flew to Switzerland to coerce a Syrian general (their hopeful candidate for replacement president) into going along with their plan. But it was the way Allison coolly slipped in and out of her German accent whenever the General’s stooges were out of earshot that tipped us off to her fearlessness. And that iciness turned almost horrifying in the episode’s final moments, when she watched the Syrian general’s departing aircraft explode in midair. Had she been involved with the explosion? Was she double-crossing the CIA? And why did she want Carrie dead? All we know is until this point, the season didn’t have an overt villain to dread; now we do. 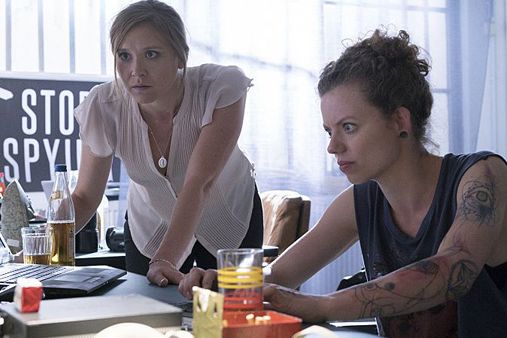 But the tense spy games of “Why is This Night Different?” went beyond even Carrie, Quinn, and Saul this week: Even Laura got up to some high-stress undercover work. Reasoning that there was more to the story of that blank USB drive, she sought out Sabine, a famous Berlin hacker currently under house arrest (and who is a pretty fantastic new character, should Homeland keep her around). If anyone could track down the original hacker, it was Sabine, so before we knew it Laura had successfully communicated to him that his USB drive had been empty, which tipped him off that his best friend had stolen the documents. Next thing we knew, the friend was attempting to sell the documents to a shady Russian man who, of course, returned the favor by murdering the dude AND his girlfriend. Which means that the possibly incriminating CIA documents were now in the Russians’ possession. And yep: The KGB are finally factoring into a season of Homeland. (The KGB are still a thing, right?) 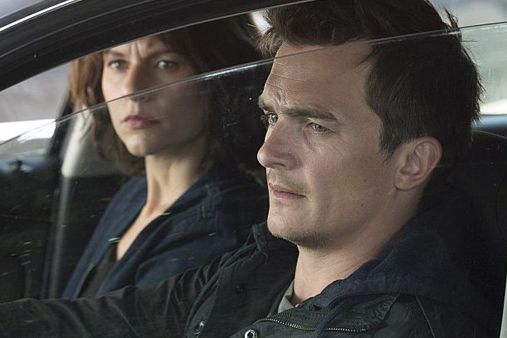 Let’s be real: This season of Homeland has been pretty wonderful so far. The first few episodes of any season require an audience to get its bearings; switching locales each year especially necessitates it. But not only are the new characters and scenarios compelling, our investment in the returning players and themes has never been deeper. Again, Homeland lives to subvert our expectations, but even more than that, it gives us outcomes that are somehow better than we’d hoped. From Quinn helping Carrie fake her death to that exploding plane, “Why is This Night Different?” surprised and delighted as much as any mid-season episode could. Even the least consequential plot (the document leak) seems pointed somewhere important, and the most important plot — Allison’s attempt to murder Carrie — has suddenly gifted us with just the formidable villainy this show needs in order to truly crackle. But, yeah, it also comes down to Carrie and Quinn’s relationship, which has never been more compelling. Even when Quinn believed she’d somehow wronged the agency, he was still on her side. It’s an inspiring and heartfelt devotion, not unlike ours toward this show! Absolutely keep bringing it, Homeland.

alternate endings 3 mins ago
Better Call Saul Could Have Ended Very Differently Jesse in prison, Gene in color, and the other possibilities considered, sincerely and in jest, for the end of this decade-and-a-half-spanning saga.
mac-ken-zie da-vis 14 mins ago
MacKenzie Davis Shows a Massive Respect to Stath Lets Flats Watch her go. Watch her go.
clear eyes full hearts 5:59 p.m.
W Magazine’s Uncanny Valley TV Cosplay, Ranked From last-minute Halloween costume to, well, store-bought Halloween costume.
batter up! 5:27 p.m.
All of A League of Their Own’s Nods to the 1992 Peaches Of course the Prime Video series knows “there’s no crying in baseball,” but that’s just the beginning of its many winks to the movie.
rip 5:20 p.m.
Wolfgang Petersen, Das Boot and The NeverEnding Story Director, Dead at 81 The German director defined action thrillers for a generation with films such as In the Line of Fire.
nicki voice: it's the remix 4:42 p.m.
Rogue One to Be Rereleased With a Sneak Peek at Prequel Series Andor Ahead of the Disney+ series’ September 21 premiere.
a long talk 4:27 p.m.
Kim Wexler’s Curtain Call Better Call Saul’s Rhea Seehorn looks back on six seasons spent getting inside ‘an extremely inscrutable character.’
By Jen Chaney
the o group 3:35 p.m.
Wait, How Many Homes Has Selling Sunset Star Chrishell Stause Sold? “As of June, I think I’ve done seven deals so far in real estate …”
vulture lists 3:00 p.m.
A Ranked Guide to John Wick–Inspired Movies Evaluating the latest generation of stunt-heavy, fist-fighting action movies.
movie nights 3:00 p.m.
Noah Baumbach’s White Noise Will Open This Year’s New York Film Festival Luca Guadagnino’s Bones and All and Maria Schrader’s She Said join the festival’s Spotlight selection.
trailer mix 2:31 p.m.
Cobra Kai Season 5 Trailer: The Valley Is Still at War Netflix’s Karate Kid spinoff premieres with honor on September 9.
remembrance 2:00 p.m.
The Jagged Life of Anne Heche She lived and died like an early Hollywood star who imploded before a grande dame period could get under way.
By Matt Zoller Seitz
lumon+ 1:35 p.m.
You Can Guess What a Book Called Talkin’ and Walken Would Be About Okay, but can you guess who would write it?
switched on pop 1:30 p.m.
Demi Lovato Knows All the Highs and ‘Whoas’ of Pop Punk On “Substance,” she flexes her intimate familiarity with the genre.
dancing through life 1:29 p.m.
Solange Is on Her Way to the Ballet “Very excited to announce i’ve composed an original score for the New York City Ballet 🖤”
overnights 1:26 p.m.
Only Murders in the Building Recap: All Is Not OK in NYC Is identifying a killer harder than sorting out daddy issues? Hard to say.
breakups 12:55 p.m.
Florence Pugh Single! (No, Not Music.) The Don’t Worry Darling star says she quietly separated from Zach Braff this year.
trent stans rise 12:43 p.m.
Never Have I Ever Cast Pitch Their Dream Celebrity Narrator Tony Hawk, the people want a Trent episode!
how to 12:18 p.m.
How to Sing Sondheim Like Sara Bareilles Why the pop singer’s voice was an unusual fit for the Broadway revival of Into the Woods.
By Jackson McHenry
album review 12:06 p.m.
Megan Thee Stallion Takes Control of Her News Cycle Traumazine is a reminder there’s a human on the other side of the headlines.
More Stories