The Legend of Marco Ramos
Season 1 Episode 3
Editor’s Rating 3 stars ***
When Brian helps Agents Harris and Boyle investigate the murder of a retired FBI agent, they’re shocked to find a link to the elusive head of a notorious drug cartel. Photo: Michael Parmelee/CBS

Let’s rewind. We pick up right where last week ended: with Brian confronting a nurse outside his sick dad’s house. “Why are you at my dad’s?” he asks. “I dunno, I’m a nurse,” says the nurse. “What does Bradley Cooper want with me?” Brian asks. “I don’t know! Again, I am a skilled nurse,” says the nurse. Case closed. Brian’s family and friends are safe from harm, thought nobody.

Since Brian’s now moving into the field and investigating crimes using his superbrain, he now has to take NZT on his commute in order to study and learn new tricks for the FBI. On his commute he runs into Shauna. You know, Shauna? The one that got away? Maybe you don’t know her because we, the audience, have never seen this character or heard her mentioned before.

Anyway, this is Shauna: 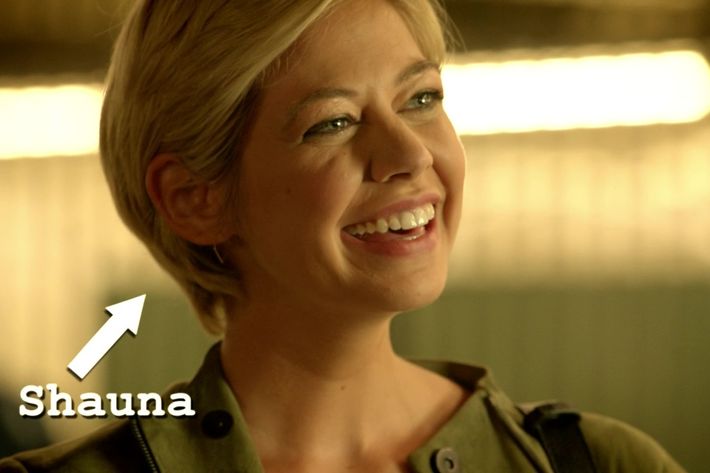 Brian manages to impress Shauna, in part because he’s on NZT, and partially because they are both trapped on the subway and it’s pretty tough to avoid small talk there. Brian gets her number and heads to the office, where Chief Naz has called an all-hands meeting.

This week’s case is the case of dead Agent Dixon, who was researching CEO replacements for a tech firm. Then he got sniped in the head and his hard drive got erased. It looks like one of the candidates took Dixon out to cover up a scandal. Yikes! Let’s hope that Brian doesn’t get sniped in the head. It is very difficult to use all 100 percent of your brain when 30 percent of it is splattered on the sidewalk.

So Dixon’s computer is busted. Good thing he kept all of these paper records, too. Oh, whoops, they’re all shredded. 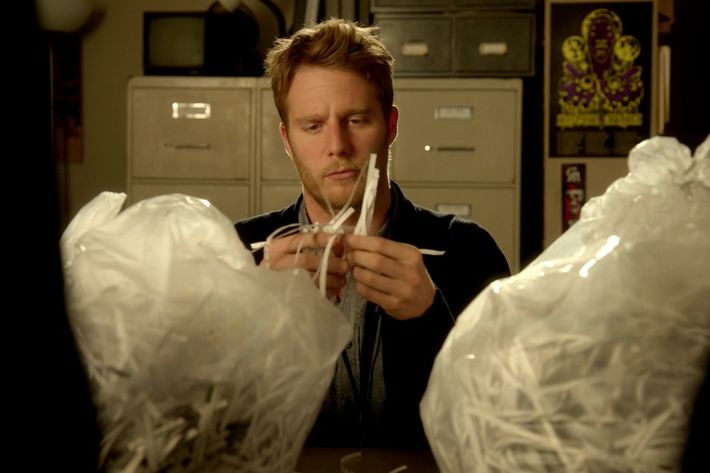 It’s almost like the documents are a big puzzle. If only Brian had some sort of mystery potion that upped his concentration and made him hyperobservant — OHWAITAMINUTE.

The gang discovers a lead in the name of Jeffrey Vox, who was making some shady financial withdrawals and likely having and affair.

Brian also manages to set a dinner-date with Shauna. There’s a slight problem, though: The NZT will likely wear off by then. This is a classic TV trope. Who know what wacky high jinks will ensue when you invite your crush to dinner but accidentally run out of pills that turn you into a genius? Oooooooops.

The team traces Vox to an intern he was boinking and the illegitimate son that they conceived. It turns out all of his shady dealings were in the interest of secretly taking care of his child. Scratch him off the suspect list: One down, five to go.

Brian tries to convince bodyguard Mike (half of Mike and Ike) (also not his real name) to give him another NZT pill, but Mike’s a smart cookie and doesn’t fall for it. Looks like Brian’s flying above the influence on his date.

Even without his jagged little pills, Brian’s shown that he is resourceful enough to fake his way through the date, right? Haha, nope! WRONG. 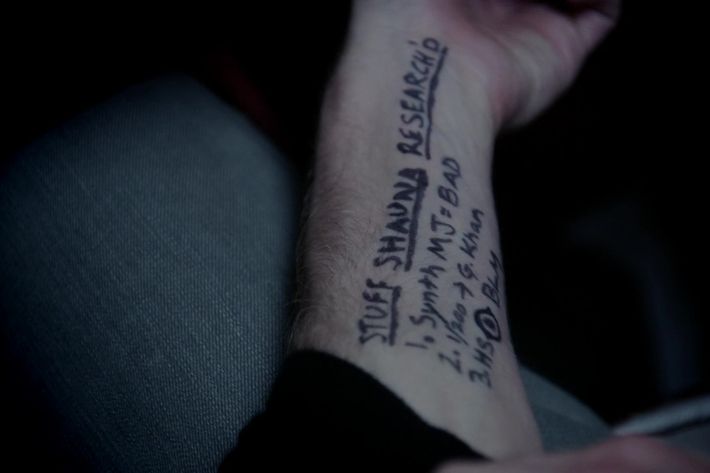 Brian whips out some fun facts about synthetic marijuana and Genghis Khan (see: last week’s ep), and after those two facts, he’s done. Normal-brain Brian only knows two facts, and they are not very interesting. Shauna is bewildered.

Rebecca and Brian head out to scenic Long Island City to check out Dixon’s old storage unit, and discover that despite having appeared to leave the FBI, he was still looking into a Mexican cartel, led by Marco Ramos.

This seems like a good place to say: WTF? Not an angry “WTF?” but a confused “WTF?” This discovery has just dismissed the first half of this week’s case as a red herring. Rebecca and Brian say so explicitly. Just last week, however, this show demonstrated a great aptitude for stringing oddball, disparate elements into a cohesive mystery in its “Genghis Khan meets bioweapons” story. Try harder, Limitless — don’t just give us witty repartee for witty repartee’s sake.

So, after a nifty B-movie summary of Ramos’s crimes — this show knows just when to throw in brief flights of fancy — Brian embarks to track down the sniper tied to Ramos, known only as La Cebra. The best way to do this, obviously, is to utilize complex math …

… to build a model out of Post-it notes. Great, important work, Brian.

Brian has figures out that the sniper was tall. At least six-foot-five. They should run that through the database. “The tall sniper database?” Rebecca asks. That’s not a thing! (But maybe it should be? CC: NSA, CIA, FBI, Google.)

Now it’s time for Brian to get real for a second. He confesses to feeling down in the dumps, thinking that NZT Brian and Regular Brian are incompatible. Rebecca gives him a pep talk: “There aren’t two Brians. There’s you. Sure, you can do more on the pill, but either way, it’s your character.” Then she also tells him that “anything is possible if you believe in yourself” and that “knowledge is the real treasure.” Okay, I made up those last two bits, but the first quote is very real and very corny.

Studying files on Ramos, Brian makes another crazy Limitless connection. The good kind. From the depths of his memory, he discovers that La Cebra is a very tall Finnish biathlete who competed in the 1988 Winter Games. A gigantic Finnish biathlon champion employed by Mexican drug cartels; now there’s your hook.

They track La Cebra to an apartment, but Brian, not allowed to chase down criminals, is forced to imagine Rebecca doing so in a very cheap riff on the “Sabotage” video.

It turns out La Cebra actually lost his shooting hand two years ago, so he couldn’t have killed Dixon, but he gives them another lead.

In the meantime, Brian rushes to go on another date with Shauna before the NZT wears off. It goes much better than the first, and Brian realizes, hours in, that the NZT had worn off long ago. Wow! All he had to do was believe in himself.

Looks like the real NZT … was inside him all along.

The next day, Brian and Rebecca head to a warehouse tied to Ramos and discover Ramos’s dead body. Boyle simultaneously discovers that the FBI task force looking into Ramos is dirty. A good twist! So far, this episode is now 1:1 on good twists:bad twists.

The corrupt task force appears to have fled, but Brian and his medical helper pull a ridiculous theory out of thin air: The criminals are fleeing the country on a plane and, to avoid radar, are flying under a larger plane.

Great model, Brian. Very informative. Also just noticed: A lot of papercraft going on in this episode. Smash-cut to them catching the guys. They got caught offscreen, because fighter jets are expensive.

Later, at the bar, a mysterious dude named Mr. Sands approaches Brian and claims to be his new boss. Sands is a stand-in for Eddie Morra, because like fighter jets, Bradley Cooper is also expensive. Sands threatens literally everyone Brian loves, and just as he leaves, Shauna — who Brian loves — walks in. They break up.

Brian and Rebecca bond over beers, and that’s where the episode ends.

It seems like, just three episodes in, the cracks are starting to show on Limitless. Part of it is baked into the show’s very premise; NZT Brian is smarter than absolutely everyone else, including the audience. Multiple times this episode, he reached conclusions using knowledge that nobody knew he had, and that lends an off-putting deus ex machina feel to some of the proceedings. Still, this is a too-rare procedural that doesn’t take itself too seriously, and it’s charming in that respect. Let’s hope these are just early season-one bumps in the road.

+Comments Leave a Comment
Limitless Recap: The NZT Inside Us All

in her (flea)bag 15 mins ago
Phoebe Waller-Bridge Has Found Her Next Archaeology Project The Indiana Jones 5 star will reportedly write a Tomb Raider TV show for Amazon.
sundance 2023 Yesterday at 10:19 p.m.
A Complete List of Films Sold at Sundance 2023 (and Their Price Tags) Greenwich Entertainment picked up Nam June Paik: Moon Is The Oldest TV.
gma3 goss: what you need to know Yesterday at 10:06 p.m.
Every Detail of T.J. Holmes and Amy Robach’s GMA3 Drama in Chronological Order The pair have now parted ways with ABC News.
gma3 goss: what you need to know Yesterday at 9:45 p.m.
ABC News Is Breaking Up With T.J. Holmes and Amy Robach But the couple is reportedly eyeing lawsuits against the network.
the vulture spot Yesterday at 9:11 p.m.
Fremont Is a Response to a ‘Fallacy’ About Women in Afghanistan  According to director Babak Jalali.
overnights Yesterday at 9:00 p.m.
RuPaul’s Drag Race Recap: Unconventional-Material Girls A much-needed filler episode sets the stakes for the rest of the season.
the vulture spot Yesterday at 7:14 p.m.
Ira Sachs Wanted to Make Passages for … Love  “What they do in front of the camera is quite aesthetically and erotically and emotionally engaging,” the director said.
oscars 2023 Yesterday at 6:02 p.m.
The Academy Subtweets Andrea Riseborough’s Friends in Statement “We are committed to ensuring an inclusive awards process.”
chat room Yesterday at 6:00 p.m.
Debra Jo Rupp Would’ve Liked to Do ‘a Little More’ on That ’70s Show “We had a lot of male writers. I understood that.”
coming soon Yesterday at 5:41 p.m.
Nicole Kidman and Maya Erskine Find The Perfect Nanny They’re producing and starring in an HBO limited-series adaptation of the French novel together.
movie review Yesterday at 4:01 p.m.
Filmmaking at the Speed of Life in One Fine Morning In Mia Hansen-Løve’s latest, emotions emerge organically from the unfussy drama onscreen.
By Bilge Ebiri
party report Yesterday at 4:00 p.m.
Harrison Ford Doesn’t Remember the Lyrics to Sugar Ray’s ‘Every Morning’ Despite singing it with Jessica Williams in Shrinking.
follow friday Yesterday at 3:51 p.m.
Bill Schaefer Knows the Difference Between Delis and Bodegas We chatted with the comedian on Instagram Live.
last night on late night Yesterday at 3:31 p.m.
Jimmy Kimmel Celebrates 20 Years of Bumping Matt Damon The show’s 20th-anniversary extravaganza brought back George Clooney, Snoop Dogg, Coldplay, and everyone’s favorite tradition.
this week in late night Yesterday at 3:25 p.m.
Andie MacDowell’s Raya Profile Won Late Night This Week Plus, Sam Morrison’s Late Night stand-up set and Natasha Lyonne giving Peter Falk.
movie review Yesterday at 3:07 p.m.
The Numbing Spectacle of Infinity Pool What I did on my summer vacation (watched myself get executed).
By Alison Willmore
overnights Yesterday at 3:04 p.m.
The Legend of Vox Machina Recap: Epic Quests and Poop Accompaniment Nothing like a black dragon to mess up your quest-completion win streak.
chat room Yesterday at 2:52 p.m.
M3gan’s Brian Jordan Alvarez Welcomes Our AI Overlords “Be M3gan. Be more M3gan.”
now streaming Yesterday at 1:58 p.m.
The 6 Best New Movies and TV Shows to Watch This Weekend Natasha Lyonne in a mystery-of-the-week show? What a concept!
endings Yesterday at 1:30 p.m.
Let’s Tálk About the Ending of Tár It’s hilárious.
By Jackson McHenry
More Stories