It’s possible that Limitless is getting a bit overstuffed. Granted, “overdoing it” might be an odd criticism for a procedural about a man who takes a magic pill that makes him the smartest man definitely on Earth and probably in the universe, but you’ll see what I mean.

Coming off of last week’s breakup, Brian is using his NZT-given intelligence to do what most guys would probably do: impress women and get in their pants. But casual sex isn’t quite giving him the release he’s looking for, so he starts cybering with other people online. And by cybering, I mean “engaging in stimulating intellectual conversation.”

“The limits of what we know? That’s something you can get lost in!” Brian says. Ahhh! He said “limit”! Finish your drink! (I am still working on a full rule set for this drinking game.)

So Brian’s in a bit of a spiral, but he’s still gotta sleuth it up for the FBI. Apparently, FBI consultants don’t have a dress code, which leads us to this: 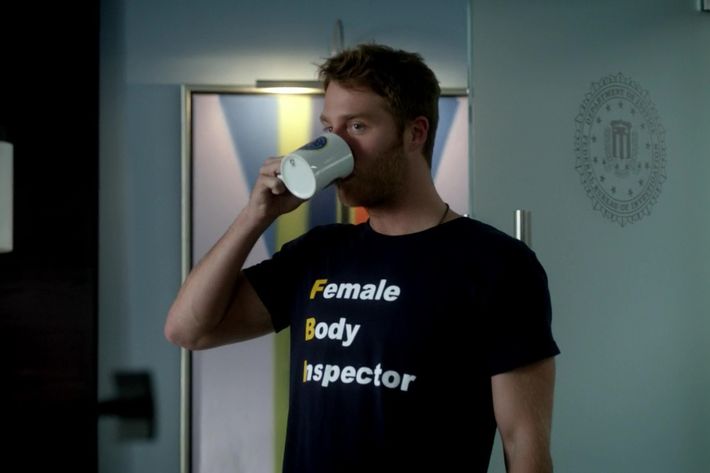 This week’s case is another first for Brian: He gets top-secret clearance. It looks like a man named Mao Zhang is selling secrets to the Chinese government, and Brian has to prove it … by sorting through his trash. Gross.

From his refuse, BriaNZT deduces that Zhang poops a lot? We get treated to this lovely image of Brian imagining his culprit dropping a deuce. 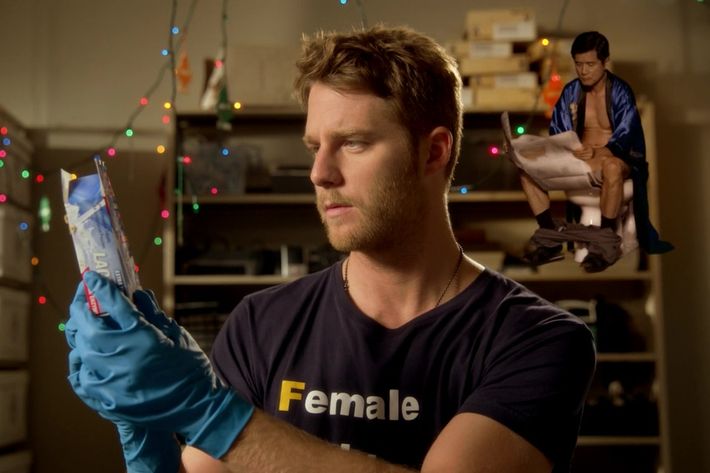 Brian also figures out that Zhang has been hiding the stolen secrets in milk cartons. Like, on the cartons are full schematics for a fighter jet? I’m not entirely sure how the milk code works, but I am sure that it looks very cool.

While all of this highly classified stuff is going on, Brian also gets a visit from Sands, his new handler/Bradley Cooper stand-in. He says that Brian needs to nab all of the data that the FBI has on NZT.

That’s gonna be kinda tough, since all of the NZT files are kept on Chief Naz’s biometrically protected computer. By some stroke of good luck, the magic brain pill unearths another one of Brian’s dormant memories: One time he got high and watch a YouTube tutorial on how to duplicate fingerprints. Classic. Who hasn’t gotten mega-high and watched fingerprint-copying tutorials? The answer is “literally everyone.”

Let’s pause the recap for a second to check the Limitless Problem Tracker™: (1) Brian is unable to form a meaningful relationship with anyone because they might get killed. (2) Brian has to deal with a highly sensitive case of the week. (3) Brian has to commit a very serious crime and steal classified material from the federal government.

And it gets worse.

One of the people Brian has been smart-cybering with is a scientist named Arthur. Brian gave Arthur some simple tips, and it led to a scientific breakthrough that could expand the human lifespan by decades. He tried the technique on a mouse named Tithonus, and it worked! But now the mouse has gone missing. Whoooops! Arthur suspects that an old business partner at his former company, Claxion, is behind the mouse’s disappearance. Things go from bad to worse when the aforementioned former partner shows up dead, covered in evidence tying Arthur to the murder. Let’s add it to the Problem Tracker.

Rebecca, hoping to score to some points as Ms. Cool FBI Agent, lets Brian blow off the Zhang spy case to look into the missing mouse murder.

Let’s see some of that sweet, sweet slo-mo pill-poppin’ action.

In between all of this, Rebecca and Brian manage to get a little more bonding time. We also get some more backstory. Rebecca’s dad was a drug addict and artist, and Rebecca suspects that he was taking NZT prior to his recent death.

So, despite the fact that Rebecca literally says, “You do not have enough room on your to-do list to help Arthur,” she lets Brian slip away to Claxion to investigate. Brian, despite being charming on NZT, is unable to bullshit his way through the lab, and sets off an alarm. As a diversion, he frees all of the mice in the lab and escapes down the laundry chute.

Long story short, Brian figures out the the murder had to do with the victim’s estate, and correctly fingers the victim’s attorney as the culprit. Case closed. Or … one of them, at least.

Meanwhile, Rebecca and Boyle catch Zhang making a dead drop at the park, so they bring him in, too. Another case closed!

We’re not done, though. Brian still has to deal with the light treason that Sands asked him to commit by stealing FBI files. Brian thinks he can fake the files himself and makes a super-inconspicuous handoff at the park.

Next thing he knows, Brian’s dad is in the hospital with a virus. Hmmm … curious! Sands shows up to say what we already know: He figured out that the files were fake and got Brian’s dad sick as a punishment. Sands — not disappointed, just mad — tells him, “You did this, Brian. And for the moment, you have the power to undo it.” Nice going, Brian, ya dingus. 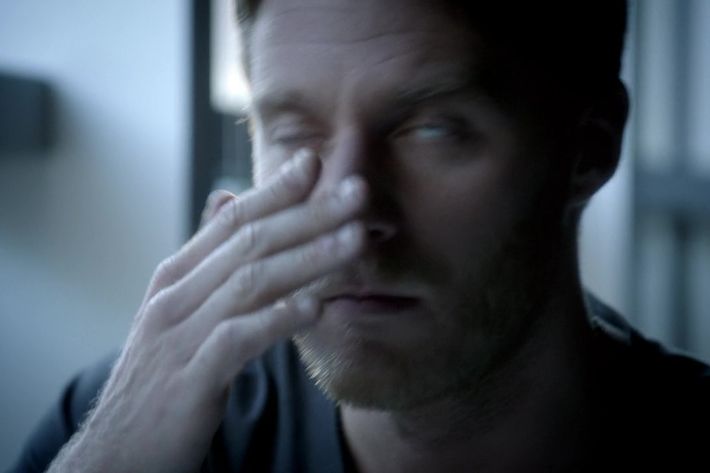 Brian relents and goes to steal the files from Naz’s computer. This sequence is intercut with audio from Zhang confessing to his crimes, and explaining why he became a spy. It is very subtle. Almost too subtle. You see, Zhang is talking about himself, but he could also be talking about Brian. Wow. That’s deep.

… and gets the files.

Before turning them over, though, Brian goes through them himself and finds records of Rebecca’s father using NZT. 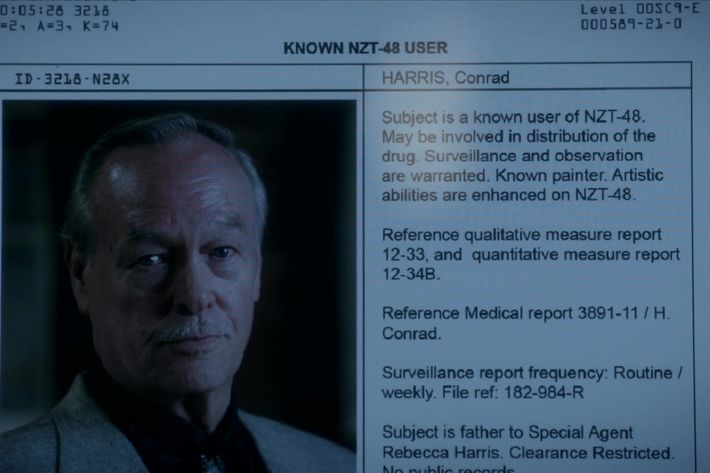 The plot thickens! Add it to the problem tracker.

This week’s Limitless was chock-full of plot; probably a little too much. In addition to not one, but two cases of the week, we were also introduced to questions that will arc over the rest of the season. How will Brian cope with the social isolation brought on by NZT? What does Eddie Morra want with the FBI’s NZT research? How does Rebecca’s dead artist father fit into all of this? I have no idea, but let’s hope this show figures out pacing before it tries to tackle any of these mysteries.

yeezy season 11 mins ago
Ye Announces Donda 2, in Case You Haven’t Gotten Enough of Him Out February 22, or 2/22/22.
nominations 12:38 p.m.
PGA Noms Boost Tick, Tick … Boom! and Being the Ricardos Oscar Odds Spider-Man: No Way Home did not receive a nomination.
nevermore 12:13 p.m.
Nicolas Cage’s Pet Crow Thinks He’s an ‘Ass’ But he likes “the goth element.”
west side story 12:03 p.m.
A Timeline of the Allegations Against West Side Story’s Ansel Elgort West Side Story co-stars Rachel Zegler, Ariana DeBose, and Rita Moreno addressed the claims over a month after the premiere.
vulture 10x10 12:00 p.m.
The Indie Puzzle 33-Across: “Dear Evan Hansen” prop.
music supervision 11:28 a.m.
Yellowjackets and Euphoria’s ’90s Music Is Filling a ‘Void of Angst and Anger’ Music supervisor Jen Malone breaks down the two shows’ musical fixations and teases some tracks still to come.
overnights 11:00 a.m.
And Just Like That … Recap: Put a Ring on It Everyone is having relationship issues.
this! is! a fun quiz! 11:00 a.m.
Can You Answer the Jeopardy! Clues Amy Schneider Couldn’t? Probably not! Well, maybe. Why don’t you try and see?
By Devon Ivie
podcasts 10:51 a.m.
There’s a New Serial Productions Podcast Coming Next Week In which Brian Reed of S-Town fame tackles a controversial event from recent British history.
racism 10:15 a.m.
Bravo Fires Jennie Nguyen From The Real Housewives of Salt Lake City Nguyen responded on Instagram Live, apologizing on one hand and digging a deeper hole with the other.
he's running Yesterday at 11:34 p.m.
The Daily Show: Ronny Chieng Wants to Be a Supreme Court Justice He has a law degree, hello!
celebrity engagements Yesterday at 9:58 p.m.
Macaulay Culkin and Brenda Song Are Engaged Please reunite the Pizza Underground to play the reception.
theater review Yesterday at 9:00 p.m.
Skeleton Crew, Transferred Uptown, Loses Some Muscle Phylicia Rashad and company try to make a small show fill up a big stage.
my single is dropping Yesterday at 8:33 p.m.
Listen to Machine Gun Kelly Cover Frank Ocean’s ‘Swim Good’ Apparently MGK thinks he can swim better.
this! is! a winner! Yesterday at 7:30 p.m.
A Talk With That Cool-Glasses Guy Who Defeated Amy Schneider on Jeopardy! “I thought I was destined to lose, so I just did my best.”
By Devon Ivie
this! is! devastating! Yesterday at 7:30 p.m.
Jeopardy! Queen Amy Schneider Ends Her Million-Dollar Reign Rhone Talsma unseated the champion after her 40-day streak.
fight club Yesterday at 6:38 p.m.
Chuck Palahniuk Is Fine With Chinese Censorship of Fight Club, Actually The Chinese ending is actually closer to the book.
extremely online Yesterday at 5:14 p.m.
We Asked Linguists Why People Are Adding -Ussy to Every Word A calzone is a pizzussy. A wine bottle has a winussy.
allegations Yesterday at 3:14 p.m.
Bill Cosby Calls We Need to Talk About Cosby Director a ‘PR Hack’ He also denied all claims against him.
lime crime Yesterday at 2:50 p.m.
Did Dakota Johnson Lock People in a Blue Bottle Coffee? An Investigation. Blog Day Afternoon.
More Stories