Last night’s episode of Limitless might not have been the best episode of the show so far — slightly too many Drug Zombies — but it was certainly the most Important. A lot of things happened for Brian and Rebecca! Bradley Cooper showed up on a roof! A guy blew up! But we’ll get to that later.

As is now routine, we pick up right where last week left off. Rebecca now knows that her dad was taking NZT and being tracked by the FBI. It turns out that decidedly lower-class Conrad Harris was spending a lot of time at a rehab facility on the Upper East Side (code for “Rich People Town”). Hmmmm … seems like something Brian and Rebecca should look into.

At work, Chief Naz recruits Rebecca for her Red Team, the criminals team in the crime-fighting simulations run by the government. While Rebecca’s tied up in fake global meltdown, Brian heads to New Springs, the rehab facility.

Brian checks into New Springs as addict Mike Ikerson (very real, very convincing name) and proceeds to … I guess, go through an entire addiction treatment in an afternoon? It seriously takes 30 seconds. This is not a very good rehab clinic, if I’m being honest. He has a screening, does some group therapy, a few trust falls, and then snoops through some files.

As Brian leaves rehab, he starts to experience blurry vision and a ringing in his ears. Uh-oh, that seems bad. It looks like Brian is suffering from NZT withdrawal. NZT side effects may also include: memory loss, extreme paranoia, rapid aging, psychosis. Brian meets with Sands to get another antidote shot, but Sands wants something in return. In order for Brian to get the shot, he has to use the stolen files to frame Rebecca and get her out of the picture.

Brian’s not too keen on that idea, so he hatches a plan to go behind Sands’s back and directly to his boss, U.S. Senator Eddie Morra. He sneaks into Morra’s headquarters and steals a staffer’s phone in order to track down Morra. 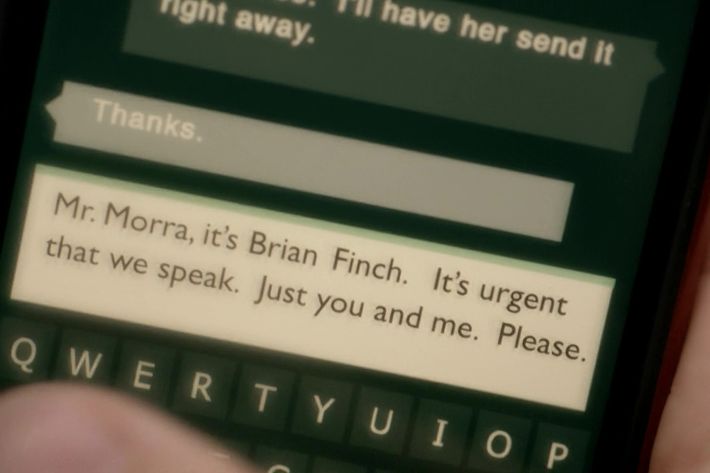 The NZT withdrawal rears its head again, and next thing Brian knows, he’s back at his desk. Morra has sexted back: “I will contact you.”

Guy in Charge: How do we cause a global financial meltdown?

Guy in Charge: Ummmmm … that’s the best idea I’ve ever heard. In my LIFE.

Back to the drug investigation, though. Brian is now hot on the trail of a guy named AE, whom Rebecca’s dad and a few other rehab patients visited regularly. AE is in fact Andrew Epperly, a neurochemist at a pharmaceutical company called Ubient.

He also goes to meet with the head honchos at Ubient and, like any perpetrators of a shadowy conspiracy, they deny everything. Also, Brian hallucinates this.

Outside Ubient’s office, Brian is going nuts. He blacks out again and wakes up at a meeting with Sands. Sands is fed up with Brian trying to go behind his back. He warns that if Brian continues what he’s doing, the old Brian “is going away and he’s never coming back.” Don’t do drugs, you guys.

In the morning, Brian finds a Post-it note slipped to him by one of the faceless Ubient execs. It says that Epperly is still alive, and Brian tracks him down to Connecticut. Unfortunately, he’s reached the end of his rope, and is now hallucinating that everyone is a zombie. He calls Rebecca and tells her to go instead.

That could be a dilemma for Rebecca. She did so well on the Red Team that the FBI wants to meet with her in Washington. So she has to choose between career advancement in D.C. or answers about her father in Connecticut. She chooses the latter.

At what appears to be an abandoned spooky shack in Connecticut, Epperly reveals that an unknown someone is snuffing out NZT users. “Some kind of purge” is how he puts it. The plot thickens.

Back in New York, Brian suffers yet another blackout and wakes up on a rooftop. He’s cured! How? Who cured him? Oh, Eddie, it’s you. Eddie is looking considerably less scummy than he appeared in the season premiere. It’s weird. Anyway, Morra reveals that this NZT withdrawal situation was a test; a test to see “whether you’re an employee, or someone who can be a partner.” Morra explains that his secret operation has been creating … world-changing, ultranutritious rice? That’s easy to grow? 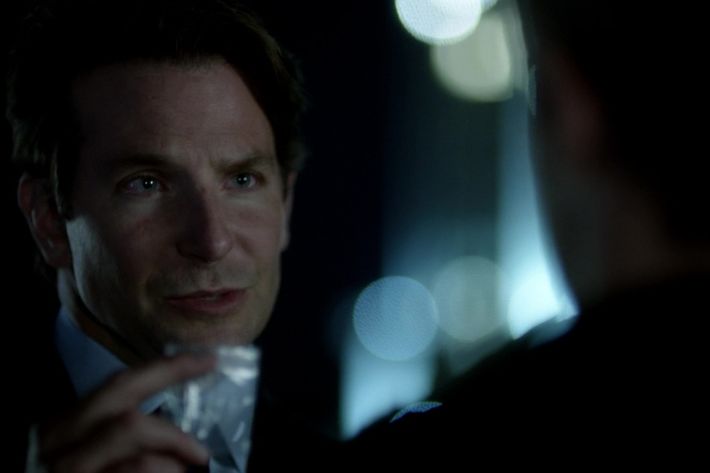 “This is great rice. A lot of people don’t like the rice because it’ll change things. They fear change. This is what I’m all about. Fear and global change and good-ass rice.”

Okay, that’s not a real quote. The rice is just one example of what Morra’s working on. Cooper wants to change the system from outside the system, and he wants Brian to help. As an added bonus for Brian’s promotion from lackey to something slightly higher, he gifts Brian five NZT pills to use as he sees fit. Brian stashes them in his record collection.

Meanwhile, Naz is pissed at Rebecca. She blew off a meeting with the FBI! Naz figures that Rebecca knows about the files on her dad. If Rebecca wants to keep looking into NZT, Naz explains, she needs to move up the FBI ladder.

Wrapping up the episode, Sands kills Epperly with a mail bomb. I’m not a professional hit man or an NZT user, but that seems like a dumb move. If I were going to kill an anonymous man hiding out in the woods far from anyone else, I would not use a bomb. Bombs attract tons of attention! Not very subtle. I’d probably use a gun?

I’m gonna stop talking about how I’d kill someone now. Anyway, big things are happening on Limitless. I hope next week’s episode is all about that super-rice.