This just in — according to the season two premiere of The Leftovers, reports of actor Mark Linn-Baker’s Sudden Departure were greatly exaggerated. During season one, we learned that along with celebrities Jennifer Lopez, Salman Rushdie, Anthony Bourdain, and Shaquille O’Neal, the entire cast of the ’80s sitcom Perfect Strangers was raptured on October 14, 2012.

After the episode aired, real-life Bronson Pinchot, aka Balki, weighed in on the news of his fictional departure. But among last night’s Leftovers revelations, courtesy of the faux tabloid show Hard 10, came the news that his Strangers co-star Linn-Baker had actually faked his disappearance. Turns out he’s been hiding out in Chihuahua, Mexico, where he played dumb when the tabloids tracked him down at a taco joint. 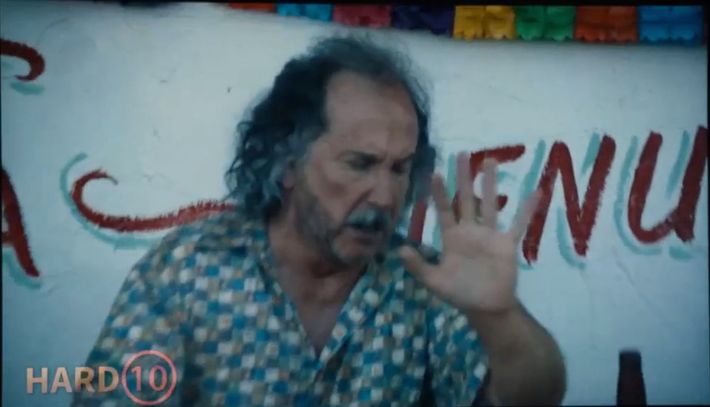 Call it penance for showrunner Damon Lindelof: At last year’s premiere party for the show, Lindelof revealed Linn-Baker had given a good reading for a part, but couldn’t be cast because they’d already killed him off on the show.

things to look forward to 17 mins ago
HBO Releases My Brilliant Friend Season 3 Trailer, Amici We’re going back to Naples this February.
this month in comedy podcasts 1:00 p.m.
This Month in Comedy Podcasts: Taylor Tomlinson’s Sad in the City Rounding up our favorite comedy podcast episodes of the month.
the lads are fighting again 12:21 p.m.
Morrissey Wants Johnny Marr to Cease and Desist, Bitch “Must you persistently, year after year, decade after decade, blame me for everything?”
vulture 10x10 12:00 p.m.
The Ungodly Puzzle 27-Across: This is what it sounds like when doves cry.
late night 11:55 a.m.
Meet Lou Wilson, Jimmy Kimmel Live!’s New Announcer We spoke with the comedian about his fancy, brand-new late-night gig.
overnights 11:50 a.m.
The Book of Boba Fett Recap: A Very Special Guest Star Wait, did we turn on the right show?
allegations 11:45 a.m.
Director Amy Berg Says She Was Stalked Online While Making Phoenix Rising “There’s a lot of like online stalking in that world, the Brian Warner world, so we had to take a look at that.”
deaths 11:18 a.m.
Peter Robbins, Charlie Brown Voice Actor, Dead at 65 He played the character in beloved specials like A Charlie Brown Christmas and It’s the Great Pumpkin, Charlie Brown.
get naked 8:00 a.m.
Could John Cameron Mitchell’s Joyfully Sexual 2006 Film Shortbus Get Made Today? It didn’t fake the sex, and I was at the try-outs.
last night on late night 1:52 a.m.
Nicole Byer Has a Lot of Questions About Spider-Man “What plot point brought [Jamie Foxx] to look like that?”
actors on actors 12:47 a.m.
Bradley Cooper ‘Didn’t Give Up on Acting’ Thanks to Paul Thomas Anderson “He was teaching me all about lenses, things I never knew.”
theater review Yesterday at 10:52 p.m.
A Speed Date With Long Day’s Journey Into Night Cut from three and a half hours to two, and TB traded for COVID.
overnights Yesterday at 10:01 p.m.
This Is Us Recap: Jack’s Mom In what may be the last stand-alone Jack episode, Milo Ventimiglia has never been better.
lightning strikes Yesterday at 9:52 p.m.
Percy Jackson’s Author Blesses Disney+ Adaption: ‘We’re in Great Hands’ Percy Jackson and the Olympians has been picked up to series.
lawrence hive Yesterday at 7:35 p.m.
Who Slapped Jay Ellis in an Airport? Drop your location, we just wanna talk.
drew's news Yesterday at 6:17 p.m.
Drew Barrymore Refuses to Kink-Shame Megan Fox and MGK Barrymore likes that he got Fox an engagement ring with thorns that hurt if she takes it off.
remakes Yesterday at 5:00 p.m.
Disney’s Live-Action Snow White ‘Makes No Sense’ to Peter Dinklage “You’re progressive in one way, but you’re still making that fucking backwards story of seven dwarfs living in a cave together.”
switched on pop Yesterday at 4:20 p.m.
Elvis Costello’s Aim Remains True, 32 Albums In  Plus, riffs on everything from Olivia Rodrigo’s songs being “how rock and roll works” to passing on a chance to write for Adele.
comedy review Yesterday at 4:16 p.m.
Aziz Ansari’s Empty Authenticity If at any point his material reached for the same goals as the look of the special, Nightclub Comedian might be a different experience.
the videodome Yesterday at 3:35 p.m.
Are You ‘Curious’ About Franz Ferdinand’s New Track? They even do an avant-garde hoedown.
More Stories