There’s no doubt that Supergirl, CBS’s foray into comics-based TV, is largely a feminist show. The first line the character utters in the series is, “I’m not afraid.” In his review of the show, Matt Zoller Seitz wrote, it’s “aware of the cultural and political implications of everything it’s showing us, whether it’s Kara taking issue with a prototype of a costume with a bared midriff or defeating a brawny, hateful, openly sexist foe by, essentially, destroying his symbolic phallus.” But I still have one nagging question on my mind: Why the hell is Supergirl wearing a skirt? 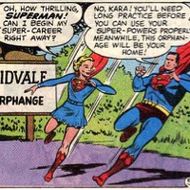 There is nothing fundamentally wrong about a woman wearing skirt; in many — almost any — contexts, it makes sense. Except for one: changing into a skirt to do something extremely physically demanding, like fighting crime and aliens. Supergirl’s costume has long been critiqued and scrutinized, and it’s gone through multiple changes since her debut in 1959. Comics collector and expert Brian G. Philbin laid out an extremely interesting history of Supergirl’s wardrobe with the help of original art submissions from fellow fans and collectors. The first iteration of her outfit had Supergirl, a.k.a. Kara Zor-El, decked out mostly in blue, much like her cousin, Superman. But despite the inclusion of the feminine skirt, the costume was criticized for being all blue, and thus too masculine. The red skirt was a variation on the original theme and became the more iconic look for the character we more often recall, pictured above. 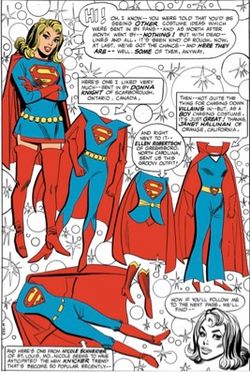 In 1970, Supergirl’s artists and editors were interested in giving her a more modern and “groovy” look. Design ideas from fans came pouring in, some of which heavily incorporated the flared look of the era’s fashions. But what’s most notable about these fan-submitted designs is the inclusion of pants and leggings. By the time feminism entered the conversation, Supergirl’s readers didn’t think their hero required a skirt to (a) be feminine or (b) kick butt.

Throughout the rest of the 1970s and into the ‘80s, Supergirl always sported a combination of blue and red with some yellow trim, but the variations came and went faster than a speeding bullet. There was a bizarre evening-gown design, puffy booty shorts, Peter Pan−esque shoes in place of her boots, a full-body tunic, lace-up ballet slippers, and this unfortunate bathing-suit concoction. The most recent controversy surrounding Supergirl’s outfit came in 2009, when DC Comics editor Matt Idelson declared, “I never want to see Supergirl’s panties again.” Soon after, a pair of red biker shorts appeared under her tiny skirt.

The 1984 film version of Supergirl closely resembles some of the earliest looks, and is probably the vision that pops into most heads when imagining the character. Supergirl’s costume in the new CBS series largely imitates that one, with a few minor tweaks: darker shades, black tights, and higher boots. But the skirt remains.

Melissa Benoist, who plays Supergirl, goes through her own costume transformation over the course of the pilot episode, with the help of her confidant and co-worker Winn (Jeremy Jordan), who designs every stage of her various outfits. First there’s a tight fitting, long-sleeved blue crop top matched with what can only be described as underwear.

“I’m not flying around saving people in this,” Kara tells him. “I wouldn’t wear it to the beach.” Next up: a fuller top paired with a tiny skirt, followed by an iteration that includes the cape and some bright red flat-heeled boots. Her final look adds black tights and, for some reason, wedge-heeled boots.

Many would argue that Supergirl’s skirt is just another example in a long line of female superheroes whose costumes exist solely to titillate male viewers. Projects like the Hawkeye Initiative are wonderful in that they point out how female comic-book characters are repeatedly drawn in an oversexualized way as compared to male characters. But that’s not really the issue here — Kara is perfectly welcome to wear as skimpy an outfit as she likes. This is about the practicality of being Supergirl. There’s a scene in the pilot where Kara does the iconic opening of her button-down shirt to reveal the signature S on her chest. Like Superman, she wears her uniform under her everyday clothes. Are we supposed to believe that she’s sporting her flouncy skirt under the form-fitting office pants she was wearing just the moment before?

Supergirl costume designer Colleen Atwood said in a press release, “In designing Supergirl, I wanted to embrace the past, but more importantly, thrust her into the street-style action hero of today.” “There’s a real love for Americana with Supergirl,” she expanded in an interview with Variety in June, “and I wanted to really embrace that heart of women — there’s enough skin out there in the world.” It’s true that with the addition of black tights, the new Supergirl doesn’t show much skin. And it’s laudable that Atwood wants Kara to be modern, chic, and stylish. Indeed, when she first appears, Kara is sporting a bright red skirt, a nice homage to her character’s roots. But when she’s out in the streets, fighting crime as Supergirl, I really wish she would put some pants on.

Why Is Supergirl Still Wearing a Skirt?

health updates 9:34 a.m.
Celine Dion Shares Rare Diagnosis, Postpones Tour The 54-year-old is living with stiff-person syndrome, which affects around one in a million people.
overnights 9:03 a.m.
Gossip Girl Recap: Exhibition at the Guggenheim Don’t spoon-feed us lessons on friendship. It’s Gossip Girl, so let’s focus on the gossip!
cancellations? 1:38 a.m.
Wait, Did Gal Gadot Jinx Wonder Woman 3? A day after she said that she was excited to share Wonder Woman’s “next chapter,” the movie is reportedly no longer moving forward.
trust me Yesterday at 11:51 p.m.
Black Adam Didn’t Do That Bad, Says Black Adam Star the Rock He said he confirmed with financiers that the movie will actually make a profit.
freaky friday Yesterday at 10:08 p.m.
Just Imagine the ‘All Too Well’ Short Film (Guillermo’s Version) Taylor Swift would like to swap places with Guillermo del Toro for a day.
overnights Yesterday at 9:07 p.m.
The Real Housewives of Salt Lake City Recap: Charcuterie Overboard People in glass houses shouldn’t throw shoes.
autopsy Yesterday at 8:13 p.m.
Anne Heche Wasn’t Drunk or High During Car Crash, Coroner Says Her official cause of death has been determined to be inhalation and thermal injuries.
let's go party Yesterday at 5:52 p.m.
Greta Gerwig’s Barbie World Keeps Getting Bigger Ken we talk about Ryan Gosling for a sec?
boston voice: wicked! Yesterday at 5:49 p.m.
Thank Goodness, the Wicked Movies Are on the Way What is this feeling? Oh, yeah, excitement.
alien superstar Yesterday at 4:52 p.m.
Avatar 2 Will Show Us the Way of the Weeknd His song for The Way of Water soundtrack drops December 15.
news from shondaland Yesterday at 3:29 p.m.
Grey’s Anatomy Scammer Elisabeth Finch Wants to Write on Handmaid’s Tale Next After admitting she “never had any form of cancer.”
buzz! buzz! Yesterday at 3:04 p.m.
It’s Almost Yellowjackets Season Citizen detectives, there’ll be a break in the case on March 24.
1.5x speed Yesterday at 2:17 p.m.
Bad Men, Weird L.A., and 8 More Podcasts Worth Checking Out Welcome to the Night Vale team’s latest world.
dolls kill Yesterday at 2:09 p.m.
Robot Renesmee Hits Some Choreo in M3gan Bolstered by her viral success, M3gan is coming for your necks, your wigs, and an innocent old woman.
gma3 goss: what you need to know Yesterday at 2:08 p.m.
Every Detail of T.J. Holmes and Amy Robach’s GMA3 Drama in Chronological Order There has been an embarrassment (and we do mean that word) of detail.
sundance 2023 Yesterday at 1:01 p.m.
Cat Person Has a Date at Sundance Film Festival 2023 As part of the lineup for the in-person and online programs.
real boys Yesterday at 1:00 p.m.
Pinocchios, Ranked What is it about this little wooden boy that’s resonated for 150 years?
my single is dropping Yesterday at 12:23 p.m.
Did You Know That There’s a Lana Del Rey Album Coming Next March? Did you know that there’s a tunnel under Ocean Blvd features Bleachers, Father John Misty, and her pastor.
vulture 10x10 Yesterday at 12:08 p.m.
The Memory Puzzle 9-Across, Nine Letters: Clarice Starling and Gracie Hart.
best of 2022 Yesterday at 11:30 a.m.
The Best Songs of 2022 This year’s music provided a fleeting and desperately needed moment of salvation.
More Stories