Bravo turns up the heat on Abby McCarthy and her pals in Season 2 of Girlfriends’ Guide to Divorce (debuts December 1 at 10/9c). As life (and love) with ex-husband Jake continues to be murky—and hot guys begin circling—it’s becoming clear that she won’t be able to sell the joys of divorce to her loyal readers. Click on the characters below to catch up on all the “rules” we learned in Season 1, and get ready for a bumpy ride. 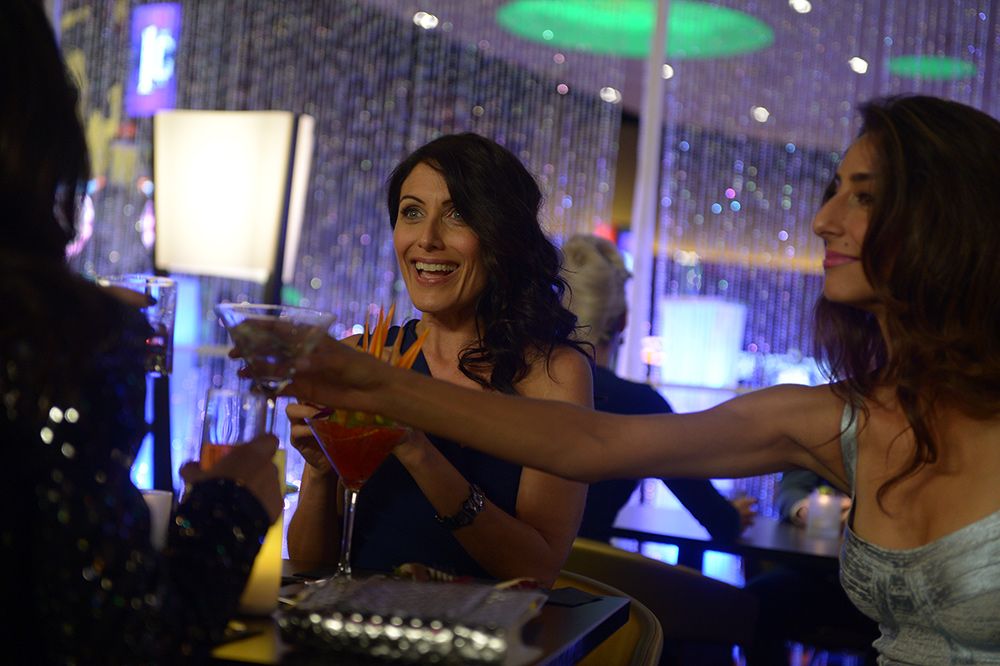 Author of the "Girlfriends’ Guide…” book series who is trying to figure out her identity now that she’s divorcing her husband and father of her two children, Jake. 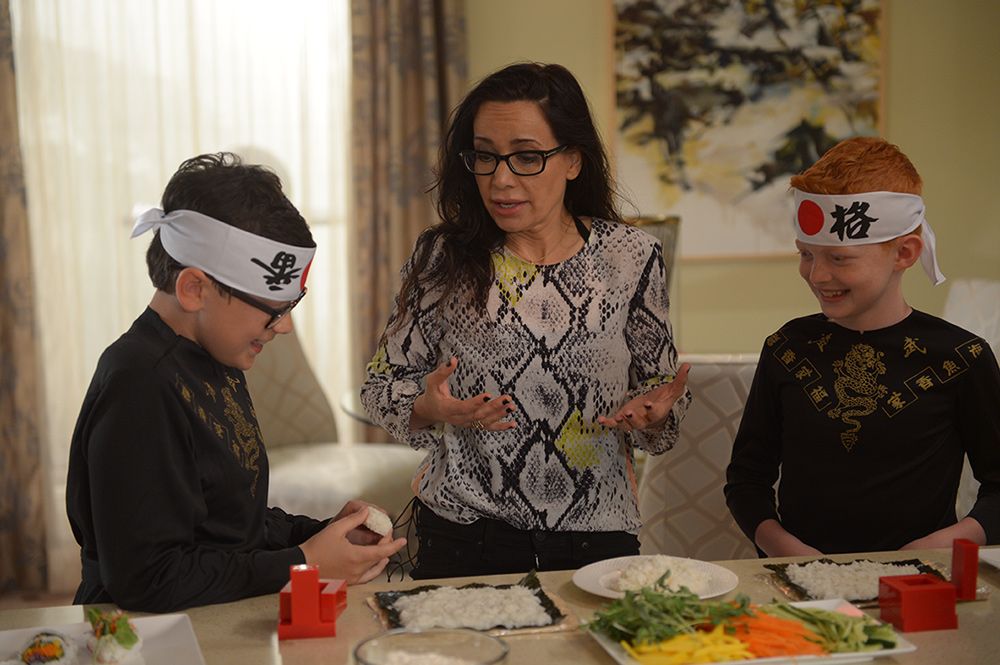 High powered entertainment attorney who is in a "War Of The Roses” type battle with her ex-husband Dan. Will do anything to win and fiercely protective of her two sons 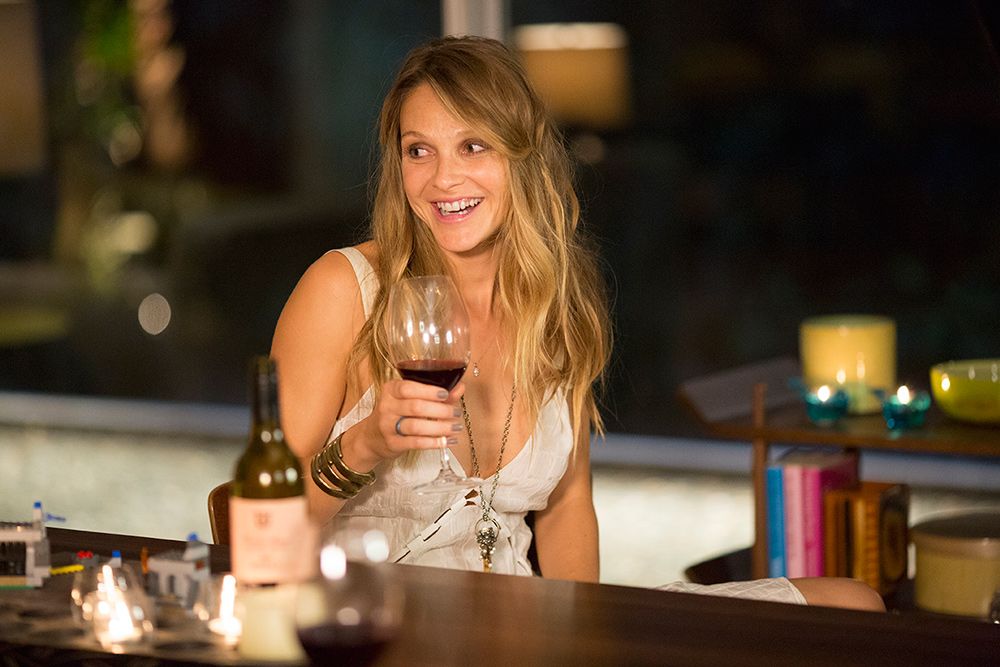 Former model with two kids who has a very unique relationship with her ex. She wants to open a business and be more than just a pretty face. 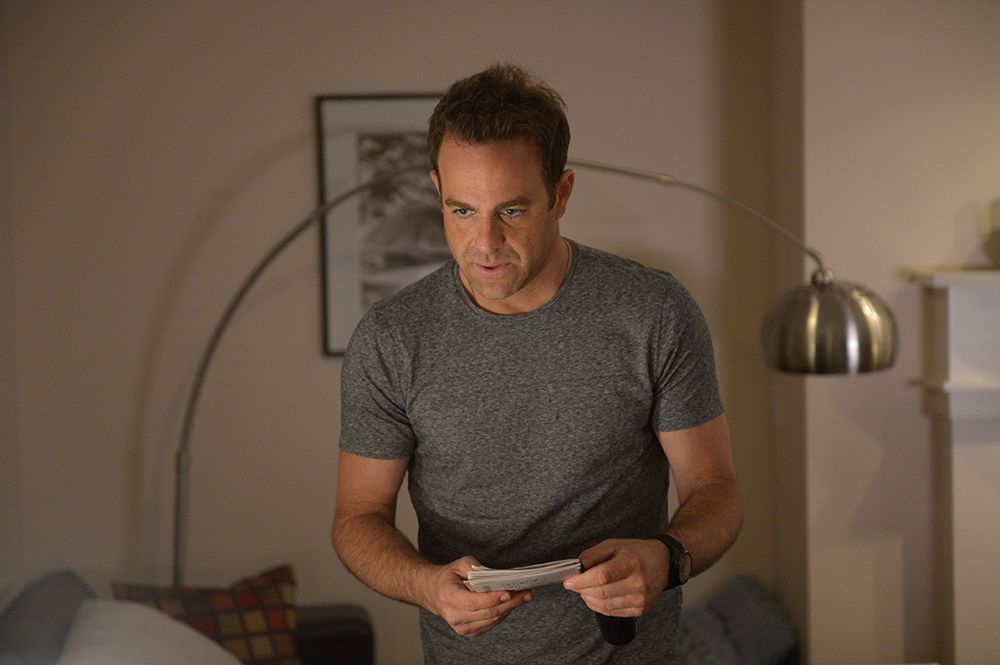 Abby’s husband and struggling director. He is looking for his own identity outside of Abby and is dating a CW actress. 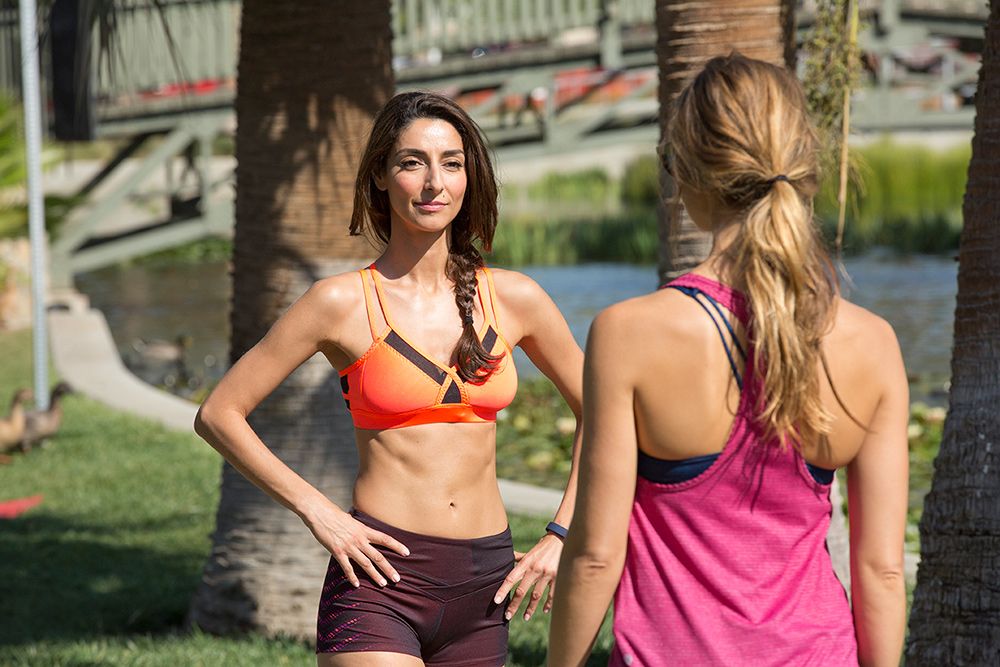 Rival attorney at Lyla’s firm. Delia specializes in divorce and wants to be Abby’s attorney. 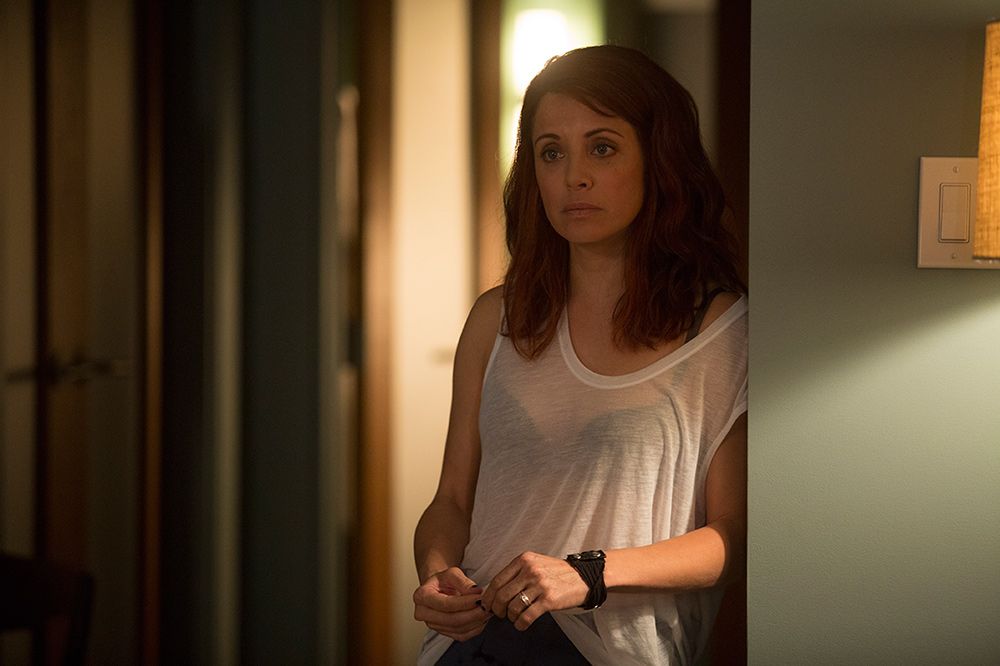 A blunt, brassy New Yorker, and Abby’s best friend from college, who comes to LA to help Abby through her divorce. 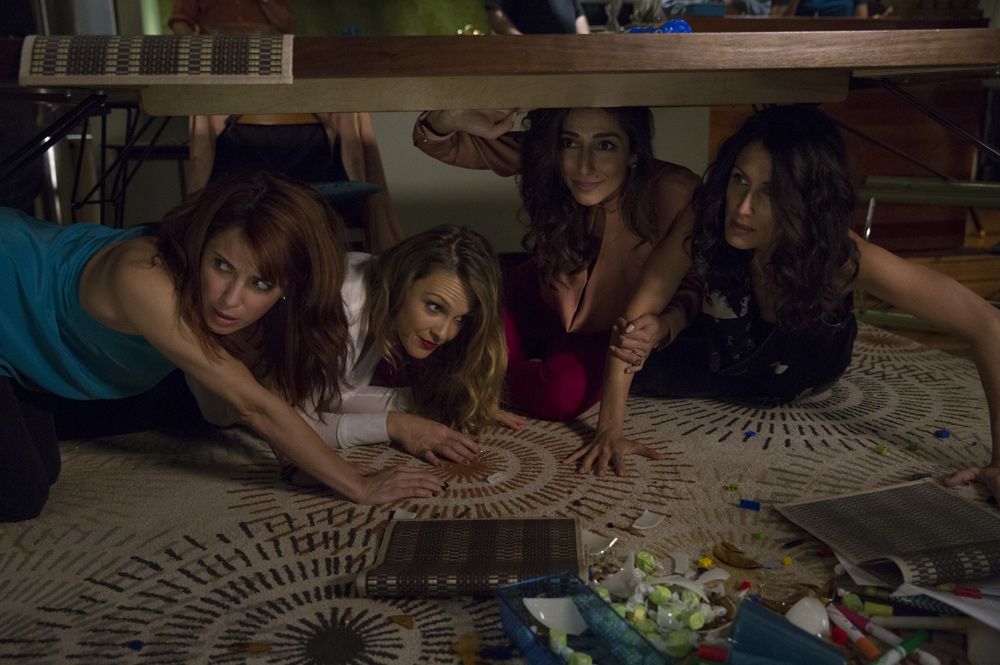 Episode 1: "Rule #23: Never Lie To The Kids.”
Abby McCarthy, famous author of the best-selling "Girlfriends’ Guide…” mommy advice book series, has been living a lie. She’s been hiding her separation from fans, friends and family. Now that husband Jake is dating, she begins to take the advice of her divorced friends leading to some life-changing experiences.

Episode 2: "Rule #174: Never Trust Anyone Who Charges By The Hour.”
Abby has to try and recover from her public breakdown and save the "Girlfriends’ Guide…” brand. She and Jake attempt to have a "good divorce” for the sake of the kids. Meanwhile, Lyla’s ex-husband exacts revenge for his DUI, and Phoebe asks Abby out to dinner.

Episode 3: "Rule #47: Always Take Advantage Of ‘Me’ Time.”
Abby spends her first night alone without the kids to focus on writing her next book when things take a sudden turn for the worse, sending the ladies on a wild ride through Hollywood. Meanwhile, Jake wants his first night with the kids at his new place to be perfect.

Episode 4: "Rule #426: Fantasyland: A Great Place To Visit
Abby starts to date Nate, a married dad with whom she had an emotional affair during her marriage. Phoebe starts to get close to one of the dads at school. Lyla tries to find a new way to release some tension. Max and Ford are honored at the Family Equality Gala and given an award by LGBT activist Adele Northrop.

Episode 5: "Rule #21: Leave Childishness To Children.”
After the disastrous date with Nate, Abby goes out with her hot, young pursuer, Will. Meanwhile, Lyla’s mother, Annie, comes to Los Angeles to help her make the best impression possible with the visiting caseworker. Phoebe tells her friends she’s in a polyamorous relationship.

Episode 6: "Rule #33: When In Doubt, Run Away.”
A photo shoot for Phoebe’s Infant Fabuleaux jewelry line takes the ladies on a trip to Vegas. Abby is cleansing and is determined to work on her next book. Lyla awaits the recommendation of the caseworker in her custody battle. Meanwhile, Jake goes to a shamanistic retreat with his girlfriend Becca.

Episode 7: "Rule #67: Don’t Kill The Princess.”
Abby throws a birthday party for her daughter Lilly only to have Jake’s girlfriend, CW actress Becca Riley, show up uninvited. Abby wonders if she’s pregnant...and entertains what she’d do if she were. Meanwhile, Delia is handling the divorce of Gordon Beech, husband of acclaimed fashion designer Courtney Beech.

Episode 8: "Rule #17: Ask The Answer Lady.”
Abby prepares to pitch her new brand to her agency when Jo, an old friend from college, arrives with her blunt, brassy New York attitude. Things get complicated when Jake gets a job directing an episode of Becca’s TV show "Blood Sisters.” Meanwhile, Phoebe holds a press preview for her Infant Fabuleaux jewelry line at her ex-husband’s new hotel.

Episode 9: "Rule #32: F-You, Rob Frumpkis!”
Abby gets an offer to write a Huffington Post article about her dating experiences as a divorced woman and must go on ten dates in two days. Jo’s daughter arrives from New York. Meanwhile, Delia, fearful that her affair with Gordon Beech will become public knowledge and get her disbarred, takes action against Courtney Beech.

Episode 10: "Rule #3: Don’t Stand In The Doorway.”
An earthquake hits Los Angeles just as Abby’s Huffington Post piece "Why Aren’t You Divorced Yet?” hits the Internet. The moms at school are furious with Abby as the article threatens to expose one of their husbands as a cheater. Meanwhile, Abby’s daughter Lilly is put on the "slut list.” Phoebe helps Marco with his urban farming business. Looking into Jo’s finances, Delia discovers a shocking secret.

Episode 11: "Rule #46: Keep The Holidays Low Key.”
Abby takes advantage of the kids being with Jake to throw an "Adult Friendsgiving” dinner with new boyfriend Will. But as strange things begin to happen around the house, Abby and Jo question whether or not a spirit has decided to join them for Thanksgiving. Phoebe invites Marco, and Delia gets a surprise visit from her father.

Episode 12: "Rule #92: Don’t Do The Crime If You Can’t Do The Time.”
Abby and Jake are finalizing their divorce but getting along better than ever. Delia is up for partnership at the law firm but her relationship with Gordon Beech threatens her chances. Phoebe has a secret history with a new mom at school, famed photographer Kori Wingo.

Episode 13: "Rule #101: Know When It’s Time To Move On.”
As Abby gets ready to sign the divorce papers, Jo insists upon throwing her a divorce party, and Will wants to celebrate by taking her to Baja, Mexico. However, Jake wants to commemorate the dissolution of his marriage from Abby in a most unexpected way. The truth about Phoebe and Kori’s past is revealed.