Anyone with an office job knows what it’s like to experience co-worker drama. Usually they’re small flare-ups like, “I see Steven ordered the cheap ice cream cake for Patti’s birthday again” or “The serial floor-sh*tter is back.” But every now and again there’ll be an actual, punishable offense that you’ve either committed or were unjustly accused of, and what was once your peaceful, productive workspace becomes your very own micro-hell. One of the smaller pleasures of Homeland has been its continual reminder that the CIA is essentially just an office job. Even Saul, who has ruled over the company in various positions, was reminded of that this week when his boss, co-workers, and lover (!) all turned their coldest shoulders toward him for something he didn’t even do. This turn of events must have brought a measure of comfort to those of us who’ve faced repercussions for accidentally replying-all to an office email. CIA bosses: They’re just like us!

This week’s episode of Homeland was entitled “Parabiosis,” which if my quick internet search is to be trusted, means the joining of two organisms into one. While that can mean the same body in physiological terms, I’m guessing it’s more a psychological state here: Carrie and Saul are FINALLY on the same page. But it was a hard-earned team-up, as the episode began with one of Homeland’s more casually brutal scenes in recent memory. Picking up from last week’s clandestine cab ride, Carrie explained to Saul what she’d been through, and asked for both intel and assistance only to find herself staring into the uncaring eyes of an Easter Island statue. And it wasn’t just that Saul was keeping mum out of professional propriety; his silence felt like active hostility toward his former friend and protégé. This was the high-horse stance Saul began the episode with, but it was the perfect setup for what would prove to be a particularly humbling experience for him.

Only minutes after scoffing at Carrie’s claims that operatives were after them both, Saul noticed the obvious spies casing his hotel. The next day he asked Allison what was up, and she more or less confirmed that Saul was under the microscope for possibly colluding with Israel. This led to a screaming match between Saul and Dar Adal in which the former accused the latter of harboring a grudge against him for labeling him a terrorist 30 years prior, and then Dar Adal demanding to know who had told Saul that the Russians were in play (Carrie). But the real fireworks began when Saul was forced to take a polygraph, and he skipped out on it to roam the hallways (effectively filmed with a tension-building steadicam) where he discovered all his co-workers had been instructed to shut him out of the system. Infuriated but keeping his chill, Saul still managed to log into the system and copy those missing documents Carrie needed, and finally escape from his own workplace. Only when he was absolutely pinned to the wall by his own allies did he finally see Carrie had been right. 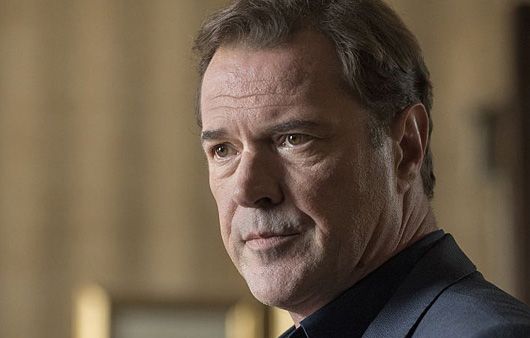 Not gonna lie, watching Saul squirm under pressure was surprisingly satisfying! Sometimes there’s nothing more humanizing than watching an almost godlike man flail around in a mud puddle. He’d treated Carrie badly, had been getting intimate with a corrupt woman, and if last season’s finale was any indication, had sort of sold his soul when it came to his integrity. But that’s why this struggle and ensuing redemption (in stealing the docs and handing them off to Düring) felt so satisfying. It wasn’t just a vindication of Carrie — it was a vindication of our faith that Saul will ultimately do the right thing when it matters. 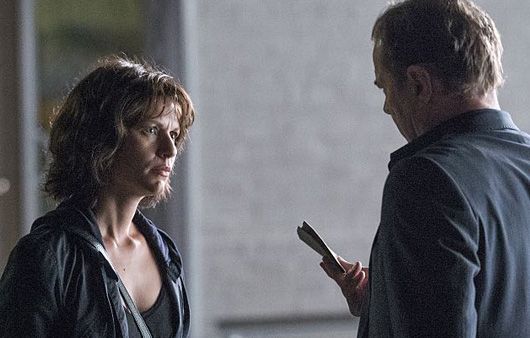 Though this episode was undeniably Saul-centric, Carrie still had some matters to tend to (one of which, unfortunately, was not tracking down Peter Quinn). Most heartbreakingly, she and Jonas seem to be completely finished. He was still livid for having been left alone with Quinn, and was actively nonplussed when she pleaded with him to help obtain those stolen documents. Love has its limits, and Carrie had blasted past them weeks ago. By episode’s end she was staring longingly through his window, her ratty wig blowing in the wind. With her romance effectively over, and having lost Saul as a friend and lost Quinn literally, it was no wonder she decided to flee her existence in Berlin. But when she asked Düring for help, he attempted to talk her out of it. Going off the grid wouldn’t help anyone, and if anything, would make her life far worse for having left these threats unmitigated. In the episode’s final scene, he delivered the CIA docs to Carrie in a folded handkerchief just before she boarded her flight to nowhere, and I think it’s safe to assume she won’t be taking that flight after all. Watch out, Russia. 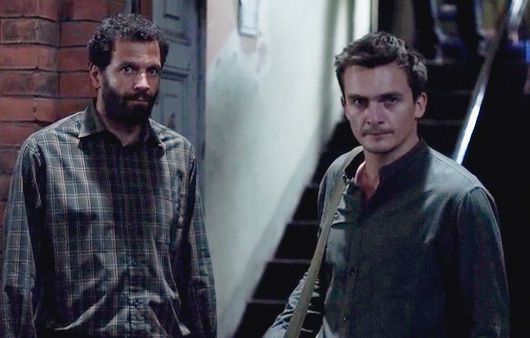 And then there was Quinn. Sometimes the biggest twist is a non-twist, so that seemingly good Samaritan last week ended up being just that! A man with a conscience who just so happened to dabble in back-alley medicine. The downside was that he shared a living space with an actual terrorist who’d been released that same day from prison as a direct result of Laura’s whistle-blowing. (Which, wow, what are you saying with that, Homeland?) Anyway, terrorists and spies can really spot each other, so it wasn’t long before Quinn and Hajik were at odds, and this culminated in an actual STREET FIGHT. After getting sliced up six ways ’til Sunday with a hunting knife, Quinn finally dug deep and throat-punched his adversary TO DEATH! This whole plotline was like a different show entirely, but man, what a watchable show. The main takeaway was that even a wounded Quinn was still able to fatally throat-punch a terrorist, and he still has a long life of throat-punching terrorists ahead of him.

“Parabiosis” worked well not only as an acceleration of the season’s story, but as sheer moment-by-moment entertainment. In positing Saul as a rebel within the CIA he’s simultaneously more sympathetic and tragic. Meanwhile Carrie’s scrambling continues, and her odyssey has truly helped delineate those who will help her (Düring, Quinn, Saul) from those who won’t (Jonas). It remains uncomfortable viewing to see Quinn get so badly beaten up every week, but as his badassery knows no limits, the thrills are undeniable. So now that we’re halfway through the season we can only hope that all these organisms continue joining into a unified whole. And by all means, let’s keep that CIA office drama coming! It sure beats whatever’s going on in OUR cubicles.