Limitless is generally at its best when it leans into how silly it is. The premise is inherently ridiculous: NZT gives you a superbrain or something? Which is why, even if the follow-through is lacking and disjointed, this episode has a pretty great elevator pitch: A bunch of futuristic, experimental prosthetic arms go haywire because they were hacked. That’s a very good, very absurd premise. That’s CSI: Cyber–level good, and that show is the benchmark for hand-wringing tech absurdity.

But first: We pick up with last week’s cliffhanger, where Brian has resolved to tell his dad about his work with the FBI and NZT. (He conveniently leaves Bradley Cooper out of the equation). “I’m the version of myself that I’ve always wanted to be,” Brian tells him. His dad is worried Brian will end up in jail or dead, which, to be honest, is a pretty good guess when you’re popping illegal pills for the FBI.

Then, we’re introduced to Boyle’s old army buddy, Aaron, who lost an arm to an IED in Iraq. Aaron gets hooked up with a futuristic robot that looks pretty rad. Cut to: Now, where Aaron has seriously messed up. His arm goes haywire and chokes his wife to death. Aaron claims that the arm acted on its own. A very odd defense, but the Limitless gang decides to look into it.

They pay a visit to CRAFT, the tech company that developed the arm, where company head Quentin claims that the arm is un-hackable. The smartest people on Earth couldn’t hack this arm. So Brian decides to hack the arm.

There’s just one problem when Brian hacks: “I just don’t know what happens during the typing part. Or even what the word hacking means exactly.” Brian learns to code from hackers on the deep web, and we’re treated to a generic hacking montage, where he takes some NZT and learns the difference between the stack and the heap? I don’t know.

In the midst of all this hacking, Brian’s nosy dad comes back with a legal solution to his whole indentured-servitude-to-the-FBI problem. He wants Brian to visit a lawyer and testify on tape about the whole shebang. Brian blows off the meeting.

Back to the renegade-arm situation. Brian hacks the arm and shows it to Quentin, who demands to know how he did it. Brian explains:

There’s a lot of lampshade hanging in this episode.

Quentin tries to recruit Brian with big bucks and jet packs and cool tech. Brian declines, because he has one thing Quentin never will: the Limitless pill.

The situation suddenly escalates, as dozens of people in possession of robot arms lose control. Cars crash, priceless art is ruined, a sous chef permanently deprives another chef of his fingers. It’s … “arm-ageddon.”

The team sets their sights on Clarion, the company responsible for the arms’ cyber-defense mechanisms. Brian identifies an engineer as one of the hackers who taught him to code because she uses the phrase … 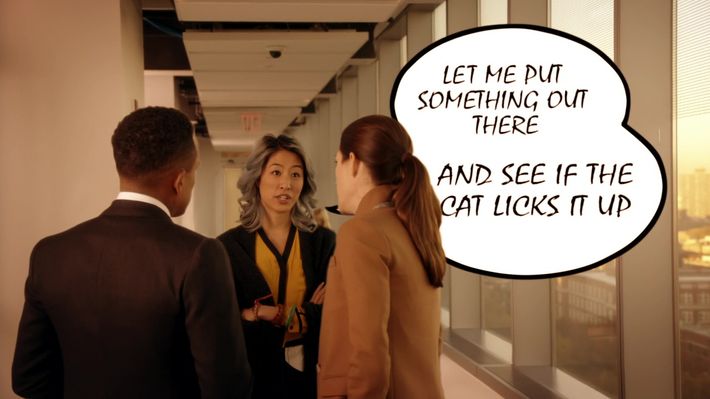 … which is a phrase that has been used exactly once prior in human history, in 12 Angry Men.

However, it turns out that the engineer, Ellen, is probably a patsy. A shell company shorted Clarion stock just before the arms went haywire, almost as if they knew something was up. Brian figures out that Ellen isn’t the suspect they’re looking for, and notifies the rest of his team with a sticky note from 2011. 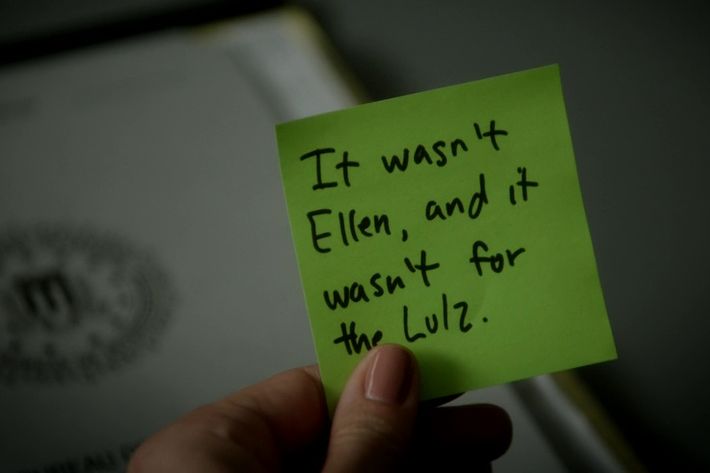 The hacker they’re looking for is Kenny Tsumida, who hightails it to the United Arab Emirates — a non-extradition country — after he struck it rich. In order to get Tsumida, the FBI will need to get him deported, so they ship him a bunch of bacon and vibrators. Apparently, those are no-nos in the UAE.

While under interrogation Stateside, Kenny admits that he hacked the arms — but he didn’t kill anyone. He does reveal that he needed a volunteer with a robot arm to allow him to experiment on it. Which brings us back to … Aaron, who used the haywire arm as an opportunity to kill his wife. You played yourself, Aaron. SMH.

Meanwhile, Brian’s dad is still bugging Brian about suing the FBI. Brian declines. “I think this drug … it’s making me a better person.” My dude … that’s literally what it’s doing. I did not need a Limitless pill to tell you that. Brian’s dad then goes, separately, to meet with Naz. He threatens to sue her into the stone age if anything happens to Brian.

Meanwhile, for all of his help, Quentin lets Brian borrow an experimental jetpack. And by “experimental,” I mean “terrible.” It’s not even a jetpack! It just lets Brian run really fast, and look like an idiot.

This is how Limitless ended this week:

hear me out 10 mins ago
Let’s Speculate Wildly About the White Lotus Ending One episode left and still so much backstabbing, frenemy friction, marital infidelity, and financial messiness to resolve.
best of 2022 11 mins ago
The Best Movies of 2022 As the iron grip streaming held on our culture loosened this past year, the theatrical experience reestablished itself.
By Bilge Ebiri and Alison Willmore
power 8:16 a.m.
Brittney Griner Has Been Released From Russian Detention The WNBA star arrived back in the U.S. on Friday morning.
theater review 6:53 a.m.
Adrienne Kennedy Goes Big: Ohio State Murders on Broadway Audra McDonald performing Adrienne Kennedy is almost everything a production needs. Almost.
the grub street diet 6:00 a.m.
SNL’s Punkie Johnson Leaves the After-Party for Taco Bell “Taco Bell, for me, is an every-Saturday stop.”
By Alan Sytsma
last night on late night 1:53 a.m.
Trevor Noah Thanks Fans, Haters, and Black Women In his last episode as the host of The Daily Show.
my album is dropping 12:17 a.m.
SZA Blesses Us with S.O.S This Holiday Season Featuring Don Toliver, Phoebe Bridgers, Travis Scott, and Ol’ Dirty Bastard.
ties cut Yesterday at 10:56 p.m.
Every Company That’s Dropped Kanye West And what they all had to say about it.
film twitter Yesterday at 10:47 p.m.
Daniel Kwan Gently Reminds Fans to Be Nice About Year-End Movie Lists The Everything Everywhere All at Once co-director wants you to ask, what would Waymond do?
overnights Yesterday at 9:01 p.m.
Ghosts Recap: Whiskey in the Walls When you’re throwing a whiskey-tasting event without a liquor license, it helps to have Prohibition-era ghosts on your side.
obviously Yesterday at 8:10 p.m.
Jennifer Lawrence Knows Other Women Have Led Action Films Before She said she made a “blunder” in her conversation with Viola Davis due to nerves.
overnights Yesterday at 6:51 p.m.
Abbott Elementary Recap: Slow Burn Things look cozier than ever between Janine and Gregory.
keeping up with the ex-royals Yesterday at 6:07 p.m.
Harry and Meghan’s Least Shocking Revelations Takeaways from their Netflix docuseries.
tv review Yesterday at 5:53 p.m.
South Side Enters Its Golden Age In its fantastically funny third season, the Chicago-set comedy exudes a sense of unparalleled confidence.
overnights Yesterday at 4:02 p.m.
Real Housewives of Miami Recap: Drop Her Like It’s Hot Of all the Real Housewives hot mics that we’ve ever had, leave it to Miami to find us the hottest one of all.
overnights Yesterday at 4:02 p.m.
Real Housewives of Miami Recap: Fall of the House of Hochstein Small domino: Lisa and Lenny Hochstein’s nanny falls in the shower. Big domino: They get divorced?
vulture lists Yesterday at 4:00 p.m.
Every HBO Show, Ranked Taking stock of the premium network’s formidable catalogue.
buffering Yesterday at 3:30 p.m.
Little Britain, Big TV: Inside the BBC’s Streaming Strategy The Beeb’s most popular shows are spread out across American streaming services. That’s by design.
meanwhile on pandora Yesterday at 3:10 p.m.
Disney World Could Get a New Avatar Ride, Says James Cameron You’ve heard of the mighty ikran, but the mighty ilu?
awards season Yesterday at 3:03 p.m.
National Board of Review Names Top Gun: Maverick Best Film of 2022 Other wins include Michelle Yeoh for Everything Everywhere All at Once and both Banshees bros.
More Stories