A quick story: Tonight I ended up in Times Square, and across the street from the venue I was at, the billboard would occasionally display ads for Limitless. They feature Brian just sort of standing there, surrounded by blurry light, and Rebecca standing over his shoulder. That’s it. I can safely say that if those ads were the only thing I knew about this show, I would not watch it.

From the very beginning, it’s clear that this episode is going to be different. It starts with a title card, and then we see Finch faking sick to Mike and Ike. (1)

This opening sequence mirrors the film (2) with impressive particularity, mainly swapping out high-school details for NZT ones, but still mirroring a few crucial lines. “How could I be expected to handle work on a day like this?” And yes, there’s a shower Mohawk.

Things get a little weird, though, when mysterious men break into Brian’s apartment, interrupt his fourth-wall-breaking monologue, Tase him, and kidnap him. “Oh, that’s not how it goes,” he notes.

Simultaneously, a CIA agent named Dean Merrick is meeting with the FBI, hoping to get Naz to loan Brian out for a secret mission. She says no repeatedly, and that’s when Merrick reveals that he’s already “recruited” Brian, so to speak.

Out in the Pennsylvania woods, Brian is woken up by a large man who tells him, “We’re not kidnapping you. You’re working with us. Welcome to your first black op.”

Brian makes the “Uuuuuuuuuhhhhhh????” face. You know the one. It’s this one. 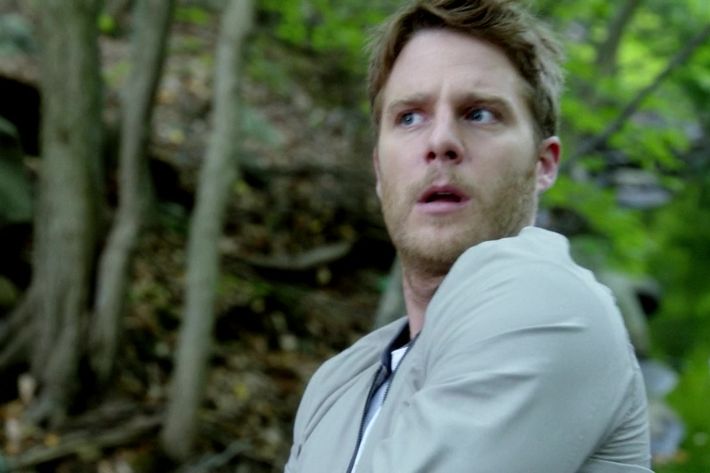 It turns out that the agents are looking for a guy named Alexei Basayev, who is supposedly a dangerous terrorist. They want Brian to pop some NZT, look at some intel, and track Basayev down. Brian names the big guy Rooney (3), the comms guy Cameron (4), and the translator Abe Froman (5).

Do you get it? Those are all Ferris Bueller names. Keep up, please.

Meanwhile, Rebecca and Boyle engage in some light, intergovernmental-agency blackmail, and threaten to blow the cover of six CIA agents unless they find out what Brian is doing. So Merrick tells them. They do some more digging, however, and find out that Basayev was not the terrorist he was reported to be. It turns out he’s a disgruntled asset with a $10 million bounty on his head.

Out in the woods, the group manages to track and nab Basayev, which is when Brian’s limited, NZT-induced Russian skills start to come in handy. This week’s neat visual gag demonstrating Brian’s NZT skill is this cute little on-the-fly Russian translation.

Brian figures out that they are going to kill Basayev, which is illegal for many different reasons, so he engineers a way to stop it. The plan backfires, and Comms guy Cameron ends up killing Rooney dead. He and Abe Froman are going to collect the bounty. In the meantime, they tie Brian up to keep him from escaping.

At this point, the NZT decides it’s time for another Bueller reference, so it conjures up Rebecca dressed as Sloane (6), fringe cowboy jacket and all. Although I don’t recall Sloane ever advising Ferris “I want you to live, which means these guys have to die,” as Rebecca tells Brian. 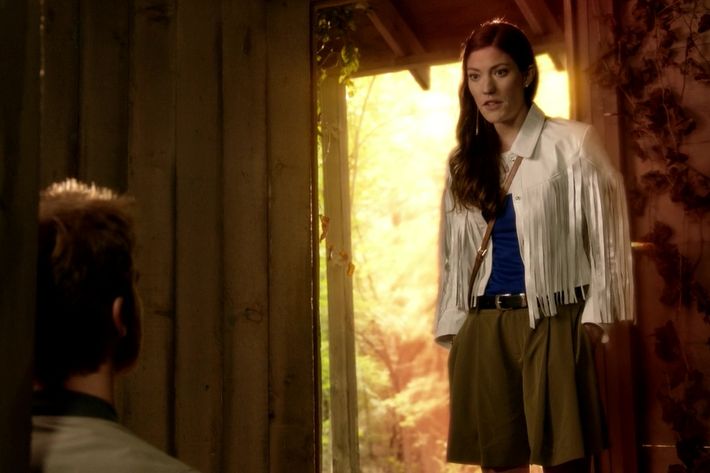 So: new plan. Brian is going to force Cameron and Abe Froman to turn on each other, and then he’s going to feed the survivor an NZT pill covered in poisoned berry. He also uses a check-in with Merrick to deliver a secret code containing his location.

After walking in circles for hours, NZT-less and alone, Brian collapses on a log. He lets out a guttural scream (7), leading Rebecca to his location. “You did it, you saved Ferris!” (8) he says in the midst of his delirium.

The day is saved. Naz promises to find whoever authorized Brian’s kidnapping, and Brian and Rebecca have an episode wrap-up chat at the large office lookout that I will henceforth call the Brooding Window.

Meanwhile, Basayev, poisoned and struggling, is picked up by a passing bus of high-schoolers. One of them kindly offers him a gummy bear. (9)

That’s it. A very goofy episode is over! Good night!