Hot off last week’s stinker, Limitless bounced back with renewed energy. This episode is called “Headquarters!” You know it’s fun because there’s an exclamation point right in the title. That’s exciting.

The titular headquarters is requested by Brian, who wants two things: a space of his own that isn’t a file room and the ability to choose his cases. He is very adamant that he does not want an office: “Boring stuff happens in an office, cool stuff happens in a headquarters.” Chief Naz does not agree, and rejects him with her best Human Beinz impression. The show literally syncs her up to the band’s “Nobody But Me“:

So, Brian proposes a challenge in order to earn his HQ. Within two weeks, he promises that he’s going to track down all ten fugitives on the FBI’s Most Wanted list. He’s even gotten one of them already. Naz agrees to the contest. Nine to go.

Brian teams up with an elite squad of FBI agents to chase down the Most Wanted. He calls his team “The Bruntouchables,” which is an absolutely terrible name, especially for someone who utilizes the full 100% of his brain.

After last week’s six billion subplots that turned into a confusing mess, this premise seems like a lot for one episode of Limitless. But luckily, most of the fugitives are just excuses for amusing runners that are peppered throughout the episode. A new character named James gets sent to the Midwest, where he has to infiltrate a cult without joining it. (That op goes about as well as you’d expect.) Boyle and Casey are sent out to find other assorted baddies.

Meanwhile, the only fugitive who really matters is an escaped murderer named Lawrence Drake. I only knew he was important because — as is the rule for all network procedurals — Drake is the only suspect played by a notable character actor. This time, it’s Isiah Whitlock Jr. of The Wire fame.

To track down the Most Wanted, Brian does what any rational person would do: He begs famous celebrities for a signal boost on Twitter. Bill Gates, Justin Bieber, Katy Perry, Ellen DeGeneres, and the Twitter account for YouTube ask their followers for tips on any of the criminals’ whereabouts. Okay, sure. I guess that’s how tweeting works?

They actually get a tip from someone, but it leads to a dead end. Using new evidence, Brian tries a new tactic that’s just a smidge above “asking for celeb RTs” on the Limitless Bonkers Scale. He pops some NZT, then gives himself synesthesia so he can see a trail of Drake’s smell and track that. Again: sure.

Just kidding! “It’s totally useless as an investigation technique,” Brian admits after wandering around New York high for what must’ve been five or six hours. That’s the American tax dollar at work.

Brian tracks Drake down anyway, and it quickly becomes obvious that he is innocent. Brian and Rebecca decide to help him clear his name from the Most Wanted list, so they give him some NZT. He immediately remembers what the real killer’s face felt like — and makes a clay sculpture of it from memory. That’s NZT for you.

As “Headquarters!” draws to a close, Naz halts the operation, citing orders from her D.C. superiors. Nonetheless, the group performed well enough for Brian to get his HQ. Everyone in the Bruntouchables gets a commemorative T-shirt.

Meanwhile in the other story line, Brian’s dad is clearly angry at Brian for all of the secrecy. So Brian decides he’ll tell him about NZT … just not this week.

Then, in an endearing stinger, we find out what happens in the fake sequels to the Bruntouchables: 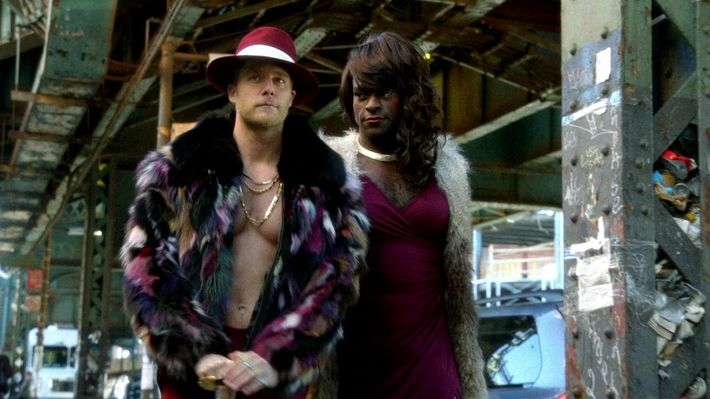 Bruntouchable: Generations is released much later, followed by two sequels.

I’m not even going to ding this gag for aping the end of 22 Jump Street. It’s well-done, it’s light, and it shows a winning attention to detail. It concentrates the best parts of Limitless into one fun segment.

Next week: Brian’s dad finally finds out about the pills. Or something.

refresher course 11 mins ago
Get Reacquainted With Drag Race All Stars’ Winners’ Circle One of these queens will be the show’s first two-time winner, so it’s time to brush up on what each has to offer — and what they lack.
fact or fiction? 18 mins ago
The Staircase Uncovers New Questions Within Tired True-Crime Theories The HBO Max miniseries uses the freedom of fiction to explore the mysteries surrounding Kathleen Peterson’s death.
buffering 3:00 p.m.
Can Stranger Things Reverse Netflix’s Bad Headlines? The stakes are higher than ever for the show to succeed.
backstories 2:50 p.m.
How Vangelis’s Cult Blade Runner Score Became a Classic The Greek composer’s work on Ridley Scott’s epic was a lodestar, marking a course open to individual interpretation.
overnights 2:47 p.m.
Conversations With Friends Recap: Can We Talk? Now that Melissa knows about Frances and Nick, it’s time for an interesting arrangement.
bearded bromance 2:38 p.m.
Jake Johnson Wants to Make a Movie With Oscar Isaac — I’ve Got a Few Ideas INT. DIMLY LIT BEDROOM - NIGHT
astroworld tragedy 2:11 p.m.
Astroworld Lawsuits Claim Almost 5,000 People Were Injured at Deadly Festival Here are the major legal battles Travis Scott faces.
law & order 2:07 p.m.
Would You Go to Anna Delvey for Legal Help? The infamous scammer is allegedly starting a law firm.
vulture lists 2:00 p.m.
9 Great Audiobooks to Listen to This Month Selma Blair, David Sedaris, The Office BFFs, and more.
spoiler alert! 1:41 p.m.
Duffer Brothers Have Alleged Hissy Fit Over Spoilers in Stranger Things Monopoly With everything going on at Netflix, a few Community Chest cards are the least of their worries.
viewing guide 1:13 p.m.
A Guide to the Pre-Ghibli Work of Hayao Miyazaki and Isao Takahata And where to stream them — if you can.
overnights 1:08 p.m.
Survivor Recap: It’s Time to Break Up One of the most spectacular and elusive moves in Survivor history is pulled off.
movie review 12:54 p.m.
Downton Abbey: A New Era Is Really the Same Old Downton Abbey For better and worse, the Crawleys are at it again.
vulture 10x10 12:40 p.m.
The Namesake Puzzle 9-Across, Five Letters: Dooku or Dracula.
where's the beef? 12:35 p.m.
Migos May No Longer Be Amigos Offset appears to have unfollowed Quavo and Takeoff amid news of their joint single.
overnights 12:00 p.m.
Hacks Recap: Nice Chacos In Vegas, Ava was the fish out of water while Deborah was the queen of the desert. On the cruise, Ava is the superstar.
overnights 12:00 p.m.
Conversations With Friends Recap: I’m Coming Clean Frances and Bobbi’s relationship finally makes sense!
fine lines 11:23 a.m.
Kevin Morby Breaks Down the Best Lyrics on This Is a Photograph Including his epic about Jeff Buckley and the line involving a “cum rag.”
art review 11:00 a.m.
A Universe in South Central Lauren Halsey’s new show is an overflowing tribute to her Los Angeles neighborhood.
adult teens 10:39 a.m.
Riverdale to End After 7th Season, K.J. Apa’s Roots Rejoice The final season will premiere in 2023.
More Stories