In Mary-Louise Parker’s first book, Dear Mr. You, boys are definitely not on the side, to paraphrase the title of one of her best-known movies. In fact, boys — well, men, really — are front and center in this lapidary, memoir-ish book, in which the Tony- and Emmy-winning actress has written letters to 33 men who have made an impact on her life. There are letters to friends, lovers (good and bad), family members (especially her late father), inspirations (a Yaqui tribal dancer, a latter-day hippie), strangers (a fireman in the aftermath of 9/11, an oyster picker), and professionals (her accountant, the doctor who saved her life, a delivery-room orderly), all of whom she looks upon with gratitude.

Talk about the book with Parker and she’ll return to that word, gratitude, repeatedly, using it to describe how she feels about these men she has known. The collection, which was released this week, is about as far from a celebrity memoir as you can get, but trust the star of Angels in America and Weeds to write a book that is closer to Elizabeth Hardwick’s Sleepless Nights than a behind-the-scenes Hollywood tell-all. In fact, it contains almost nothing of show business, with virtually no bold-faced names mentioned.

Below, you can hear Parker read a story from the book, “Dear Gorgeous,” and then learn more about how the book came together and the role that writing plays in Parker’s life.

Why letters to men exclusively?
I appreciate men and I am a romantic. And I feel like I’ve had a lot of varied experiences with men. I’m older now, you know, 51 years old, and I’ve lived a lot of my life with men. Really interesting, heroic men. Difficult men. And brilliant men. And I liked being able to kind of celebrate that.

Have long have you been writing?
I always wrote when I was little. I always wrote poetry, for somebody’s birthday or for a boyfriend, and short stories. Then somebody asked me to write something for a magazine and I wrote it. And then I wrote another piece. And then I was asked to write for Esquire. I loved writing for that magazine. It gave me so many opportunities to write. 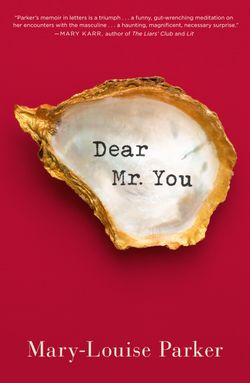 Did Esquire play any part in the creation of this book?
One of the larger pieces I wrote for the magazine was about my dad. Then they asked me to write about men in general and it came out in letter form. It was just this invocation, which is the beginning of the book now. I just completely loved writing it — I loved the directness of it. I felt free to be as poetic as I wanted to, or as specific or abstract or mundane. But I had a word count, you know, because this is a magazine. The piece about my dad wasn’t a letter. But I felt like that piece and the invocation were the beginnings of something. Then I experimented and wrote that letter to my accountant. And then I met Eric Simonoff, who’s my agent, and he helped me distill it into the idea. Because I was saying to him, “Does this make sense?” And he said, “Yes, you should try to do it.”

What is your process?
Well, I turn on the Disney Channel and have my children crawl all over me and then have my dog walk on the computer and erase everything I wrote. I didn’t have ideal conditions writing this book. But I can write almost anywhere if I know where I’m going.

Your book is about men, yet is dedicated to your mother.
She’s quite represented in the letter “Dear Orderly,” because I talk about the mother I want to be. And in “Dear Daddy” and “Dear Oyster Picker.” She’s in some way peripheral, but that was a big statement I made by dedicating the book to her. My father would have loved that. He thought the sun rose and set with her. My father appreciated her in a way that was pure. They were married 64 years. So people say, “We’ve been going through a rough patch, we’ve had hard years.” Well, my parents had a rough patch that lasted decades, and in the end, they were just in love and devoted to one another. It’s definitely the exception and I’ve only seen it a handful of times and it’s inspiring.

On your book tour, you are appearing several times with Mary Karr, author of The Liar’s Club. How did this come about?
We’ve been friends and we’ve been working on a project together, but I don’t know if it will happen. I love her books. She’s one of my favorite writers and one of my favorite poets. She’s smart, and as tender as she is tough, and generous as can be. She’s worth listening to as a person. Hopefully I can just let her talk. She’s about a zillion times more interesting than I am.

In your acknowledgments, you thanked the late Mark Strand. What kind of relationship did you have with him?
He’s my favorite poet. One time in my life I was not having a good time and just out of nowhere for whatever reason I put a few poems in an envelope and sent them to him. As soon as I did someone who knew him well and knew that I wrote poetry said, “Don’t ever send it to Mark because he’s really, really tough,” and I thought, What if he hates it? I was horrified, but I was having a horrible time in my life. But he left me a phone message that was like getting a transfusion because he said — and I kept it all these years, it’s on a computer somewhere — something really nice; that was all I needed, just one sentence from him saying something nice about my writing.

Are you planning to write another book?
Well, hopefully. If nothing else, for myself. I really enjoyed the process.