Waitress Alice is a nightmare dressed like a daydream. In between doing impressions of Cartman and getting Dev to take intense Vines of her, she steals another girl’s coat at the Father John Misty show ‘cuz she’s bananas like that, and she is right that a lot of coats get stolen at concerts. 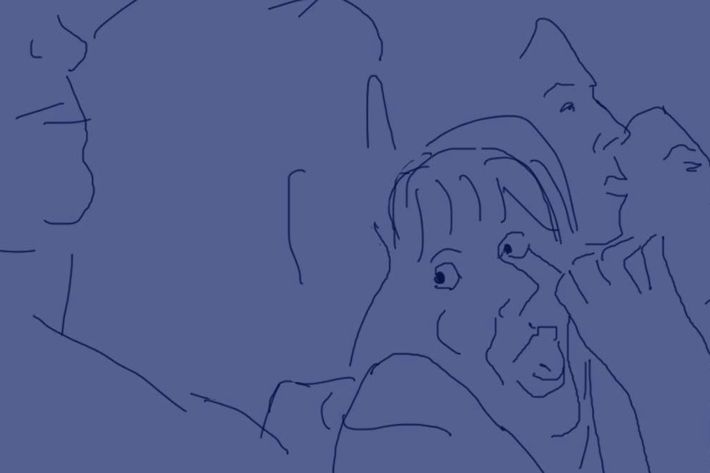 Dev blew off several other girls to score this night with Alice, including one with a headband and another — I’m partial to — who’s a journalist. A lot is going well for Dev these days. He’s made it into The Sickening due to a casting snafu. There, he meets Benjamin, played by H. Jon Benjamin, who also voices Archer. Who wouldn’t want to be friends with a guy who sounds like Archer but looks like hip Santa? Benjamin is the token white in this black virus movie; as Vulture editor E. Alex Jung astutely points out, he subverts Hollywood’s old “magical Negro” trope by spouting airy wisdoms, while the great Colin Salmon (just heard of him from this show, but he’s clearly always been great) gets to indulge a Dude-level eccentricity we will soon experience. 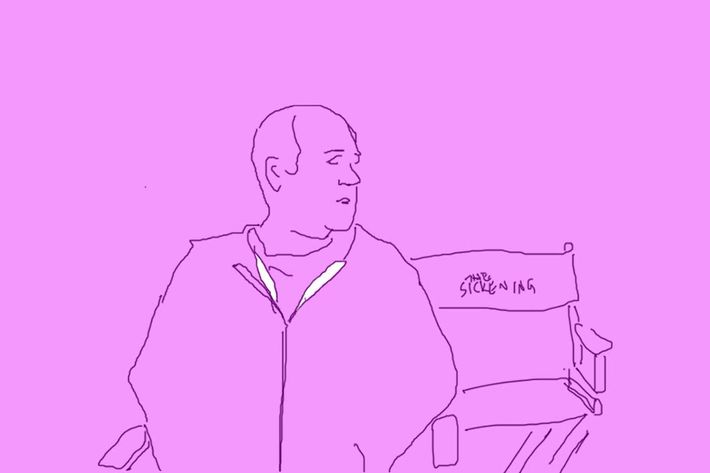 Back to Alice. She’s standing next to Dev! He didn’t even send a mysterious text to get her to text back, like Arnold suggested. I really do like Arnold’s “turtle in a briefcase” idea. I feel like, just maybe, it’s how Barack got Michelle. 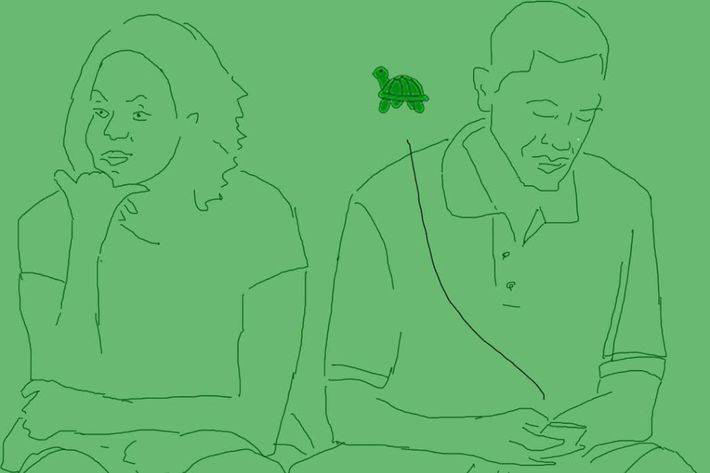 Alice plays some thought experiments, like what if she blew that guy over there? Stole that chick’s coat? She does try the last idea. It doesn’t go so well. She gets kicked out of the event — bye, Nina Arianda, you are so cool — and Dev is free to run into his old bed-pal Rachel. From episode one!

While they have a great night together, by the end she admits she’s trying to patch things up with an ex. But Rachel is clearly the girl Dev belongs with. Her Cartman impression is bomb, and she’s not insane. Their banter is sparkling, too. Some viewers have focused on the fact that Rachel is white, which seems like a missed opportunity on a show so concerned with race and representation. POC on TV all too commonly date white people, in a “two steps forward, one step back, there can’t be two” sort of dance. Intriguingly, Noël Wells, who plays Rachel, is actually half Tunisian and a quarter Latina. Aziz’s DNA is more homogenous than hers. But no matter. Race is confusing, and this is yet one more arena — dating while Indian — I have a feeling Aziz will confront some season to come. When you’re on top of the world at the pinnacle of Mount Netflix, everything’s material.

+Comments Leave a Comment
MON Recap: Love in the Time of Cartman

overnights 22 mins ago
Better Call Saul Recap: Getting Away With It Kim proves she’s still capable of being human.
the world is healing Yesterday at 10:36 p.m.
Audra McDonald Is Finally Coming Back to Broadway As the star of Ohio State Murders, written by Adrienne Kennedy and directed by Kenny Leon.
wexler watch Yesterday at 10:25 p.m.
How is Kim Doing After The “Waterworks” Episode of Better Call Saul? It’s Kim Wexler like we’ve never seen her before.
overnights Yesterday at 10:00 p.m.
Industry Recap: Let’s Find Out How Essential You Are “I’m sick of commenting on the direction of the wind. Shall we make it blow?”
overnights Yesterday at 9:53 p.m.
Below Deck Mediterranean Recap: Dark Waters This drama between Natasha and Dave isn’t fun to talk about.
olivia newton-john Yesterday at 8:30 p.m.
John Travolta, Mia Farrow, Dionne Warwick, and More Remember Olivia Newton-John “Yours from the first moment I saw you and forever! Your Danny, your John!”
accidents Yesterday at 7:40 p.m.
Anne Heche in ‘Extreme Critical Condition’ Following Car Crash According to a representative, she has remained in a coma since shortly after the accident.
it never ends Yesterday at 7:17 p.m.
Ezra Miller Charged With Felony Burglary in Vermont After allegedly breaking into an unoccupied home and taking several bottles of alcohol.
overnights Yesterday at 6:30 p.m.
The Sandman Season-Finale Recap: Wanna Put My Tender Heart in a Blender Dream, one of the most tight-buttholed characters in fiction, has declenched.
timelines Yesterday at 6:15 p.m.
The Complete History of Ezra Miller’s Controversial Career From kidnapping allegations to cult rumors to The Flash turmoil.
theater kids Yesterday at 6:09 p.m.
Tom Cruise Wants to Star in a Movie Musical One of three films he’s reportedly developing, including a Tropic Thunder callback.
collabs Yesterday at 6:03 p.m.
Tiny Dancer Britney Spears Collaborated With ‘Tiny Dancer’ Singer Elton John “Hold Me Closer” is Spears’s first song in six years.
overnights Yesterday at 5:30 p.m.
The Sandman Recap: Like a Comic-Book Convention? Rose alters reality while the Corinthian basks in adulation.
crash and learn Yesterday at 5:12 p.m.
HBO Max’s Latest Change Is One Most Users Might Not Notice Finally, some much-needed maintenance.
the law Yesterday at 5:11 p.m.
Fetty Wap Arrested for Allegedly Violating Release Conditions He has been accused of threatening someone’s life via FaceTime.
my wife? Yesterday at 5:11 p.m.
Joe Keery and Lamorne Morris Are the New Boys in Fargo Season 5 At least one kidnapping is guaranteed.
rip Yesterday at 4:41 p.m.
Dame Olivia Newton-John Is Dead at 73 The Golden Globe–nominated Grease star was an advocate for breast-cancer research.
overnights Yesterday at 4:30 p.m.
The Sandman Recap: Lost Dreams Dream takes his job very seriously, to the point where he sometimes cannot see the people he’s doing it for.
100 scares Yesterday at 4:00 p.m.
The 30 Most Influential Slasher Movies of All Time A guide to the horror subgenre with game-changing, rule-breaking, and absolutely terrifying films.
'lucky to be alive' Yesterday at 3:48 p.m.
Ashton Kutcher Says Autoimmune Disease ‘Knocked Out’ His Vision and Hearing Now he’s healthy enough to be in Costa Rican jungles with Bear Grylls, thank goodness.
More Stories