‘These Were Some of the Most Dangerous People I Have Ever Come Across.’ 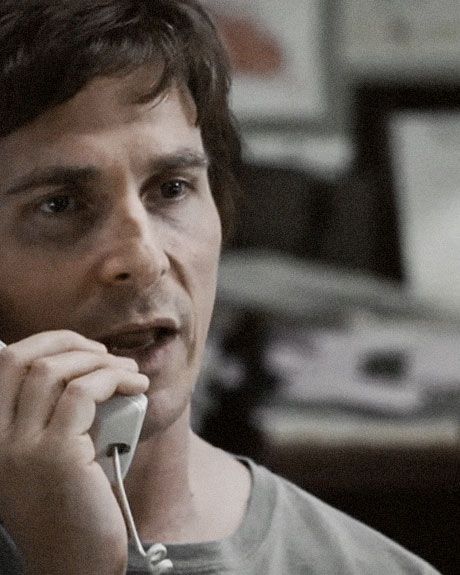 Adam McKay’s The Big Short — the subject of this week’s Vulture cover story — stars Christian Bale as Michael Burry, a California doctor who, despite having only one functioning eye, saw the crisis before anyone else. Here he talks about his character research, shadowing real-life subjects, and his performance in the film, hailed by Big Short author Michael Lewis as “borderline creepy.”

Did you know Adam before you signed up for The Big Short?
I’d not met Adam, but he just called me, you know, he’s obsessed with the financial crisis, and he’s a very engaging guy. I really drank the Kool-Aid when it comes to Adam, he’s the shit. And I loved the idea that the guy who had done all of the Will Ferrell films was going to be tackling this. And when he sent me the script, I just fell for it. I did some research on Mike Burry, and looked at some interviews, and read lots of things, and thought, Absolutely. He’s a wonderful character. And I then went and met Mike, and it turns out he’s a wonderful person as well.

Michael Lewis said your performance, the way you mirrored Burry’s affect, was “borderline creepy.”
That’s so nice of him. I had the best time with Mike Burry. He’s clearly a brilliant man. But he is also an incredibly heartfelt, very sincere man. When we started, it was very early in the morning. We had coffee, and we talked nonstop until it was dark. About absolutely everything under the sun. It was a very interesting day, far more for me than it was for him. He is just such an engaging man, and so unusual, and somebody who I became incredibly fond of. And unfortunately I won’t be able to make the New York premiere because I’ll be here working, but I’m hoping he can make it to the L.A. premiere, because I really want to sit next to him and see if he’s going to punch me in the face.

It’s interesting to me that you describe Burry as engaging and charming, since those are not words you usually associate with people on the autism spectrum. Or high-finance people, for that matter.
He is one of the most sincere people I have ever met. And at the same time as having such an incredible mind, he feels immensely, for the information he gathers, for the situation of the markets.

I was talking to one of the editors on the film and he said, “You know, Mike Burry is not a good guy. He did a very bad thing, by creating this credit-default swap.”
Yeah, but hold on. Not being a good guy is not the same as being a bad guy. In this story, we aren’t presenting an unrealisitic portrayal. These people made an immense amount of money, of course they did. Nobody in the story is a hero. But Mike at least did shout and scream, and nobody really listened, and as the film says at the end, he called the authorities. He wanted for there to be something gained from this, but nobody really paid attention to him. From my experience with him, he is a real philanthropist, and he has immensely sincere feelings about the imbalance of the market and how it is rigged against every man. And he doesn’t just recognize that in a cerebral manner, he feels that. And it’s one of the things that made me like him so very much. This is not just facts and figures to him. He knows completely the emotions this involves, and what this meant to so many different people. I have to actually kind of restrain myself in talking about him, because he gave me access with sort of a tacit agreement that this was privacy. But I was so impressed with the man on an emotional level with what it meant to him, and his own very concise and very deep thoughts about the market and the situation that we are in now. Although for me to describe that to you would be completely laughable. The only thing I can compare it with is the research I did for American Psycho. I met with a lot of guys on Wall Street, and the difference between those gentlemen — and I use that word very loosely — and Mike is just solar systems apart.

This is not the first time that you’ve portrayed a real person and gotten close with him in real life. I remember reading that you had gotten really close with the guy you played in The Fighter.
It’s happened for me a few times. You’re talking about about Dickie, who I am still in touch with, and Dickie’s son as well. And Mel from American Hustle. I find there’s a freedom in playing a real character because, unlike with fictional characters, you have evidence: When you present something to a director and they say, “What are you doing?” You can go, “Look, this is what the guy’s like,” and they can’t argue with you. Whereas when it’s entirely fictional, they look at you like you are trying to steal the scene. Like, “This is too much, this is over the top.” When you are dealing with a real person, it’s the most satisfying and freeing acting I’ve ever felt.

Do you ever feel conflicted, when you meet a real person and like them, about portraying their less-admirable characteristics?
No, whenever I meet with somebody I am going to portray, I always start the conversation by saying that they have to accept that there is no interesting story that glamorizes everybody. There’s no character there. I went through that with Mel, and with Dickie, and with Mike as well. It’s about truth as much as possible, although of course we are taking some license because we are packing this all into a very short amount of time, but the goal is to stay as true as possible within that license. And you know, I don’t know if I could be so trusting, if someone was telling my life story, I would feel very vulnerable. But they were all very adventurous with that idea and accepted it.

Wait, can we go back to what you just said about American Psycho? Remind me what your research process was like for that, and who you met, and how it differed?
Someone introduced me to this group of young guys, and I spent quite a lot of time with them. I went on the trading floor, and to offices, and then we went out for the evenings, and I have no idea where we went, I couldn’t tell you, but it was disturbing. That was a lesson to me in how much people want you to be the character that you are playing. All I had to do was sit back and be quiet, and people will blur the lines between character and person. And hearing and witnessing this complete misunderstanding of the book. Seeing that firsthand, sitting until the early hours in the morning partying with people who believed I was that character. [Laughs.]

So I guess you’re not in touch with those people.
God, no. No way. Those were some of the most dangerous people I have ever come across in my life.

+Comments Leave a Comment
Christian Bale on The Big Short
last night on late night Yesterday at 11:07 p.m.
Watch Lil Jon Give Musical Opinions on WWHL Is he Team Stallion or Team Cardi? Reba or Shania?
overnights Yesterday at 10:30 p.m.
Barry Recap: F– –k the Algorithm A solid but disjointed episode unveils an array of ghosts from the past.
theater review Yesterday at 9:55 p.m.
Who Killed My Father: Elegy Saturated With Cliché Édouard Louis’s memoir has been bizarrely and frustratingly staged.
overnights Yesterday at 9:01 p.m.
Gaslit Recap: Who’s Gonna Accept All This Watergate Blame Already? Just when things were going so well for John Dean …
overnights Yesterday at 9:00 p.m.
The Real Housewives of Atlanta Recap: Legs and Hips and Broadway The ladies and their men head to New York City at Kandi’s very characteristic invitation.
another one Yesterday at 7:00 p.m.
Kourtney Kardashian and Travis Barker Got Married (Again) (Again) Sealed with the Kris of approval.
obits Yesterday at 6:53 p.m.
Legendary Sci-fi Concept Artist Colin Cantwell Dead at 90 He designed the X-Wing, A-Wing, Star Destroyer, and TIE Fighter, and the Death Star’s trench.
goodbyes Yesterday at 4:12 p.m.
Pete Davidson Thanks Lorne Michaels in Final ‘Weekend Update’ Bit “Lorne accidentally gifted me a sock, so I’m free.”
overnights Yesterday at 2:18 p.m.
Saturday Night Live Season-Finale Recap: Natasha Lyonne Hosts a Good-bye Party A series of emotional send-offs overshadows the laughs in this season-ender.
cannes 2022 Yesterday at 9:39 a.m.
‘Irma Vep Is Not a Movie. Irma Vep Is a Concept.’ Director Olivier Assayas and his new star Alicia Vikander discuss remaking his beloved movie as a TV series (or whatever you want to call it).
goodbyes Yesterday at 2:49 a.m.
Aidy Bryant Says Good-bye to SNL With a Final Trend Forecast Alongside Bowen Yang.
goodbyes Yesterday at 1:32 a.m.
Kate McKinnon Bids Farewell to SNL, Ascends to Space “I always kind of felt like an alien on this planet anyway.”
second wedding May 21, 2022
Let Drew Barrymore and Paul Feig Make Bridesmaids 2, You Cowards Free puppies for everyone!
beloved May 21, 2022
Quinta Brunson’s Mom Didn’t Understand Her Job Until Abbott Elementary “I showed [my mom] a BuzzFeed video and she was like, ‘What is this?’”
fridge fixer May 21, 2022
Jeremy Strong Practiced His Dad Jokes on Anne Hathaway The two star as fictional versions of James Gray’s parents in Armageddon Time.
overnights May 21, 2022
RuPaul’s Drag Race All Stars Recap: Monsoon Season Jinkx has reached the apex of what it means to compete in Snatch Game.
cannes 2022 May 21, 2022
George Miller Returns to Cannes With a Freaky, Maximalist Fairy Tale Three Thousand Years of Longing is a fairy tale within a fairy tale (about telling fairy tales) that feels like Miller’s answer to The Princess Bride.
By Rachel Handler
box office May 21, 2022
Everything Everywhere All at Once to Beat Uncut Gems As A24’s Biggest Hit At the domestic box office in this universe, at least.
hiatuses May 21, 2022
Doja Cat’s Tonsils Have Canceled Her Summer Performances, Including Lollapalooza She’ll be taking time off to recover from surgery.
timelines May 20, 2022
A Timeline of Travis Scott’s Post-Astroworld Public Return His previously postponed collaboration with Nike is back on.
More Stories