‘They Should Have Broken Up the Banks.’

The Big Short author Michael Lewis on watching his book on the big screen and what hasn’t changed since the crash. 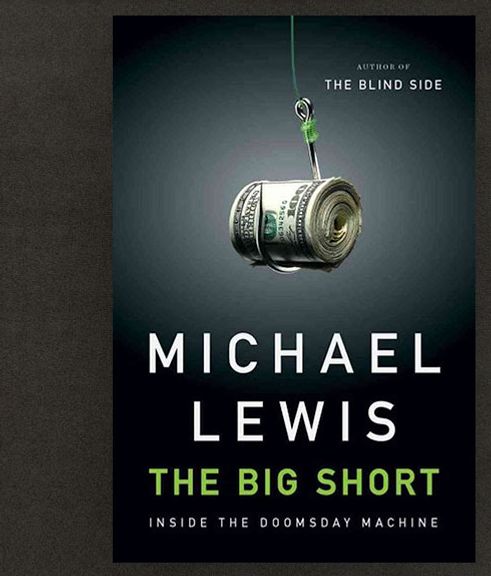 This week’s Vulture cover story, on Adam McKay’s The Big Short, asks whether America is angry enough for a Hollywood version of Occupy Wall Street, and if McKay’s brand of dick jokes can actually teach us something about the financial crisis and what went wrong in 2008. The man who really knows what went wrong is Michael Lewis, the author of the book on which the movie is based and a few other masterworks of financial journalism. Here, he talks about the Hail Mary long shot of making of the movie, its chances to make audiences furious about bailouts, and why no one really got all that furious the first time around.

What did you think of the movie?
The hair. The hair is their hair. I was shocked by how close, especially the principals, captured the actual people. Christian Bale was so much like Michael Burry that I thought it was creepy — he did a very, very good job. He was wearing Michael Burry’s clothes. That T-shirt and shorts. I asked Adam: How did he even know he was wearing that when I went to see him? The answer is he didn’t. That’s what Michael Burry was wearing when Christian Bale went to see him, and Christian was like, “Can I have your clothes?” I guess he has had to get new clothes now.

Do you think if a lot of people see the movie, it might get people angry about the financial crisis again?
It’s very hard to know what people are going to care about. Do I think it is going to trigger political change? I bet it gets the conversation going again. Why was there any resistance to reform at all? But having watched this thing the first time around, if there wasn’t dramatic reform in the heat of the moment, when everybody was really really pissed off, when the banks had no political standing whatsoever, it’s not going to happen now.

It’s interesting that you say that, because I’ve talked to some of the guys in the book, and their position is that the system is much safer, that Dodd-Frank really worked, and they kind of disagreed with the end of the movie, which implies that this is all going to happen again.
It sort of worked. One thing it has not changed is the sheer size of these institutions, they’ve gotten bigger rather than smaller. And I don’t understand that , I would have thought that from Too Big To Fail we would have found a way to make them small enough so that it was ok for them to fail. And know there’s all this complicated language about how you can resolve them in bankruptcy but I don’t believe it, and the markets don’t believe it. The bigger thing is — I regarded this crisis at bottom as a problem of incentives. People behaved badly because they were incentivized to behave badly, and the incentives haven’t really changed that much. They have changed a little bit on the margins, like paying people a bit more more in stock rather than just cash at the end of the year. But it’s a cultural problem has been created over a long period of time, because people are not locked into their individual firms for very a long time, and they are very short-term oriented, and the firms are short-term oriented, and The people who ultimately own the company, the shareholders, aren’t anywhere near the company when its making big decisions. It’s a recipe for disaster. I don’t think there’s going to be an identical crisis any time soon, but I think that, the big things that might have been done to make the system safe really weren’t done and I can think of a few things that might have been done. I think they should have broken up the banks.

And in your opinion, why didn’t that happen?
It didn’t happen because the Obama administration decided that it was worse than the course of action they took. They considered it, kind of. If you asked Tim Geithner why it didn’t happen, he would say how am I going to do that? I am going to have to nationalize these banks, and then break them up. Well, we’re really not equipped to run the entire financial system out of the Treasury. And the system is in such disarray and chaos that we are more likely to create more crisis, than resolve the crisis if we do that. Which is not a terrible argument. The problem is, that  having profit what we what didn’t bank on, is it’s really clear from his memoir was that having rescued these places that they would turn right around and exert maximum political pressure to have any reform of them. He probably thought if they are going to be downsized they’ll be downsized in a time of peace and not in a crisis environment. But then once they were resurrected they were impossible to deal with politically because they ended up sticking their hands into the regulation to change them right away. Another kind of reform, which would eventually cause them to shrink a lot, would be vastly increasing the capital requirements, which has been floated by people, require them to hold not just about 7 percent or 6 percent but 20 percent, and what happens is they’d become a lot less profitable, they can’t take big big bets and no one would want to invest in them or work for them. But that has been roundly defeated at the regulatory level. I think, beneath that, the bigger problem is, virtually everybody at the table, even well-meaning government employees, when they are talking about what to do about these places, have — even if they aren’t thinking about it consciously, cannot help but consider the likelihood that the way they are going to make a living, a very good living, when they get done with government work, is to go work for one of these places. So nobody who is actually in the conversation has anything but a disincentive to keep everyone in power in the financial sector in place and happy. So I just think it’s like regulatory capture on a grand scale. It’s not just the SEC and the CFTC that’s a problem, because those guys who directly regulate the sector know that they are going to get jobs on Wall Street of they don’t alienate too many people.

My sense is that most people don’t really want to deal with any of this, that it’s overwhelming on many levels.
It’s very complicated and it’s the sort of thing other people are supposed to deal with, so it’s nobody’s problem. I’m reading this book right now, and it’s basically the history of Israel, and the author is talking about how all of Israel ignores the building of the nuclear bomb in Israel, and as momentous as this is, and as much as it’s going to call for a reaction from Arab states to have their own nuclear bomb, nobody really wants to know. It’s a very interesting — in some ways, Democratic societies don’t want to be informed about some things, and why would that be? I would say that much of the pain is numbed by monetary policy; that is true of the financial crisis. Had it played itself out in the way it would have, if the Fed didn’t know what it was doing, like in 1929, we would have had so much pain and so much unemployment, that people would have been forced to deal with it. But people don’t want to deal with unpleasantness. Like they don’t want to go to the doctor. They hope it heals itself.

In a weird way, isn’t this why the characters in The Big Shorthad the opportunity they did? Because people didn’t want to know there was a bubble in the housing market, even though everyone knew something bad was going on.
It was really true, I remember coming across this phenomenon, on the wrong side of things: People were just thinking, “This doesn’t have to last very long for me to do well. And if it all goes down it’s not going to affect me. So why think about it too much?” There’s a great line in the movie: “You tell me the difference between corrupt and stupid and I’ll have my wife’s brother arrested.” That to me goes right to the argument of, how conscious is it, what is going on. Are people knowingly lying and deceiving to get money, or they just ignoring to get money? I think it’s complicated. It depends on the person and the mixture of depending on the person and the mixture of corruption and ignorance. And at some point, of course, it doesn’t even matter.

+Comments Leave a Comment
Michael Lewis on The Big Short

instagram 23 mins ago
Lana Del Rey Posts Looting Video on Instagram, Gets Called Out by Kehlani Del Rey of recently dated a cop fame.
chat room 3:08 p.m.
Malia White Wouldn’t Be Below Deck’s First Female Bosun Without Captain Sandy Below Deck: Mediterranean’s new bosun talks returning to the series, quarantine, and sexism in yachting.
now streaming 3:00 p.m.
New on Disney+: June 2020 Avengers: Infinity War, Schoolhouse Rock, and more.
two friends 1:30 p.m.
Roy Wood Jr. and Jimmy O. Yang Barely Survived Middle School Both encountered their fair share of bullies.
food tv 12:50 p.m.
Where Can Food Travel Shows Take Us Now? Episodes shot even a few months ago feel like artifacts from another time.
By Rachel Sugar
sotw 12:34 p.m.
TikTok’s ‘Wipe It Down’ Challenge Didn’t Start With the Song ‘Wipe It Down’ Unpacking the origins of this week’s TikTok song of the week.
By Zoe Haylock
now streaming 12:00 p.m.
New on HBO: June 2020 Perry Mason, Ford v Ferrari, Ad Astra, and more.
black lives matter 11:43 a.m.
Ariana Grande, Halsey, and More Celebrities Spent Their Weekends Protesting From all over the country.
close reads 11:40 a.m.
Cops Are Always the Main Characters TV perfected the cop show, metastasized it, and then franchised it into ubiquity. How does that affect the way audiences think about police?
By Kathryn VanArendonk
vulture guides 11:16 a.m.
The Class of 2020’s Guide to All the Virtual Celebrity Commencement Speeches Including Barack Obama, Barack Obama, and Barack Obama.
last night on late night 11:03 a.m.
John Oliver Recaps the Year of America’s ‘Brutality Bingo’ “That misconduct is in and of itself built on a legacy of white supremacy.”
history lessons 10:50 a.m.
Spike Lee Debuts Short Film Connecting George Floyd and Do the Right Thing “This is history again and again and again …”
postponements 10:48 a.m.
Drama Desk Awards Postponed Out of Regard for Ongoing Protests “We stand together with our black colleagues against the racial injustice and violence in our nation and city.”
best of 2020 9:00 a.m.
The Best Movies of the Year (So Far) From a new Netflix rom-com to a retro sci-fi movie on Amazon to the final Trip film.
By
now streaming 9:00 a.m.
New on Amazon Prime: June 2020 Knives Out, Dirty Dancing, Where the Wild Things Are, and more.
extremely online 8:28 a.m.
K-Pop Stans Spammed the Dallas Police Department’s App With Fan Cams We’re all just doing our part, okay?
obits 1:59 a.m.
Herb Stempel, Quiz Show Whistleblower, Dead at 93 John Turturro portrayed Stempel in the 1994 Oscar-nominated historical drama.
protests 12:08 a.m.
J.R. Smith Beats Up Man Who Allegedly Smashed His Car Window During Protest During Sunday’s protest in Los Angeles.
now streaming Yesterday at 11:55 p.m.
New on Hulu: June 2020 A Beautiful Day in the Neighborhood, I Am Legend, Casino, and more.
overnights Yesterday at 11:08 p.m.
Quiz Premiere Recap: Who Wants to Be a Millionaire? The miniseries kicks off with the roller-coaster origin story of a game-show phenomenon and the unlikely faction of fans looking to hack it.
More Stories